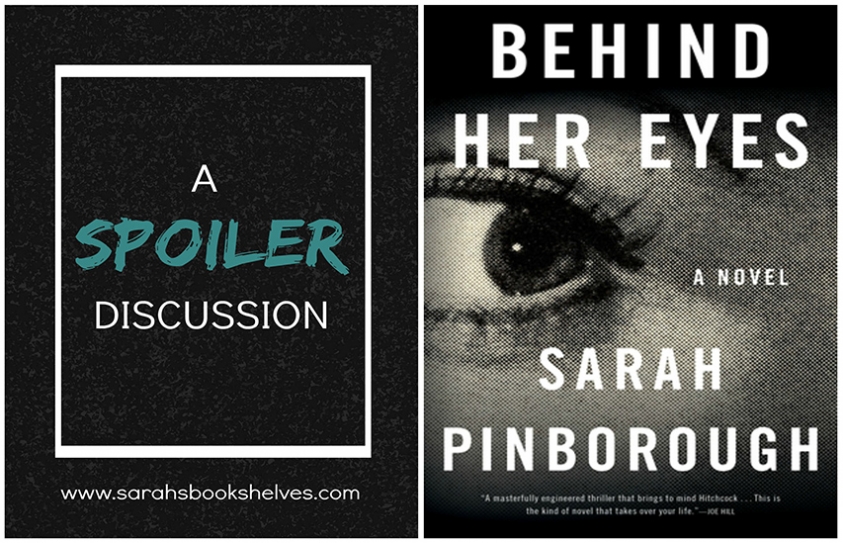 Female protagonists in novels are getting to be increasingly dangerous; and Gillian Flynn’s Gone Girl seems to have triggered off a trend of the nasty heroine. Sarah Pinborough’s Behind Her Eyes is slightly reminiscent of Paula Hawkins’s Girl On TheTrain, in that a woman starts taking an inordinate interest in the lives of a couple. The similarity ends there, however, as Louise, the protagonist of Pinborough’s book is not a total loser, and she actually knows the couple in question.

Louise is an attractive blonde, with an alcohol problem, who has let herself go after her divorce. She has custody of her son Adam, but is a bit envious of her husband Ian’s life with his second wife-- the news of her pregnancy causes Louise a great deal of heartburn.

She works at a dead-end job at a doctor’s clinic; after a bit of a drunken romp with the very attractive David, she discovers to her acute discomfort, that he is her new boss and he is married.

The other woman in the story is the beautiful and fragile Adele, David’s wife. They have just moved to London after some trouble in their marriage, to make a fresh start. There is something strange about Adele, who seems to have extra-sensory perception when it comes to her husband.

When Louise is left alone after Adam goes on a holiday with his father, she starts an affair with David, in spite of making all efforts to resist him. To complicate her life further, the lonely Adele befriends her, and begs her not to tell David, because he is too possessive and controlling. Adele, however, has her own devious agenda.

The book flashbacks to Adele’s past, the death of her parents, her time in a mental institution and her friendship with the junkie, Rob. What Adele and Louise have in common, are bizarre night terrors. Adele tells Louise of a way to overcome them, and this opens up a channel that hurtles her friend into an area of darkness, a descent she cannot control. David appears to be afraid of Adele’s power, but unable to escape her clutches.

Louise does not tell David about her growing friendship with his wife, nor does she reveal to Adele that she works for her husband. She gets entangled in their lives. As she muses, “Questions, questions, questions. It seems that ever since David and Adele came into my life I’ve been filled with questions. They’re like weeds in water. Every time I think I can swim away another one tangles around my legs to drag me back down.”

Behind Her Eyes has quite rightly gained bestseller status—it is a psychological horror thriller, with ingenious twists and turns, and a truly creepy ending the reader cannot guess.

Behind Her Eyes
By Sarah Pinborough
Publisher: HarperCollins
Pages: 306