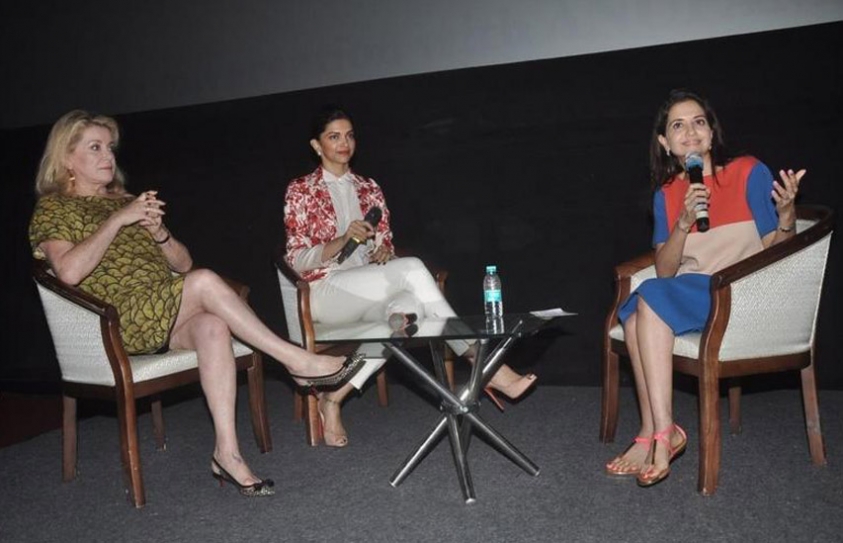 Mumbai, October 15, 2014:  After a starry opening ceremony, movie lovers qued up at  PVR Andheri, Cinemax Versova  and Chandan Cinema for a one of a kind fare of world class films, workshops, master classes and more on Day 2 of the 16th Mumbai Film Festival organized by the Mumbai Academy of Moving Images (MAMI).

Committed to ensuring that the patrons of the Mumbai Film Festival voted, the festival commenced it program to suit the voting timings, in addition to spreading the message of the importance of voting.

The cinema fare continued at PVR Andheri with screenings of Greek film ‘Playing with Fire’ directed by Anneta Papathanasiou  and Gabe Polsky’s , Russian-American film ‘Red Army’ besides the delectable blend of world cinema that comprised Argentinean film ‘Refugiado’ directed by Diego Lerman, Chinese film ‘Norjmaa’ directed by Bayaneruul Bayaneruul and ‘Clownwise’, a 2013  film by director Viktor Taus. Screens 2, 3 and 5 at the Andheri PVR studded with an equally engaging lineup left cinephiles spoilt for choices with films such as Feo Aladag’s German film ‘Inbetween Worlds’, Celina Murga’s ‘The Third Side of the River’, director duo Ronit Elkabetz and Shlomi Elkabetz’s ‘Gett, The Trial of Viviane Amsalem’ and Russian film ‘Demons’ directed by Vladimir Khotinenko among the numerous other films playing at the festivals other venues.

This year’s festival took exchange of cinema to another level and played host to some defining meetings at the Films Remake Market organised by UniFrance Films and La Fabrique Films in cooperation with the Mumbai Film Festival. Keeping in mind the tastes of Indian audiences, a selection of films presented to Indian producers included ‘Serial (Bad) Weddings’, ‘In the Courtyard’, ‘Homeland’, ‘Not My Type’, ‘Where Do We Go Now?’ and ‘Superchondriac’.

A Hindi film that particularly stood out Mrityunjay Devvrat ‘Children of War’, introduced by acclaimed film maker Hansal Mehta under FC Directors Choice. Indian director Khalid Mohammed’s ode to veteran filmmaker Shyam Benegal through the film ‘The Master Shyam Benegal’ proved to be a refreshing walks down the memory lane.

The afternoon session presented by HBO Premium Channels witnessed a rare discussion with Lifetime Achievement Award winner French actress Catherine Deneuve and noted Indian actress Deepika Padukone in Conversation with Anupama Chopra that opened a never seen before side of the veteran actress’ career, one that movie goers gathered firsthand, in awe.

An interesting discussion ensued as the two actors shared candidly their experiences on a diverse range of issues from their personal to professional lives and their opinions on the difference between cinema in India, Europe and the rest of the world.

Vishal and Rekha Bhardwaj, Nikhil Advani, Kritika Kamra, Mukesh Rishi, Shakun Batra were some of the other celebrities spotted at the festival.

It was a Wednesday that left cinema buffs all smiles and looking forward to more on days to come. Tomorrow is an equally engrossing day waiting to unveil pearls of world cinema across Mumbai’s iconic sub-urban theatres.