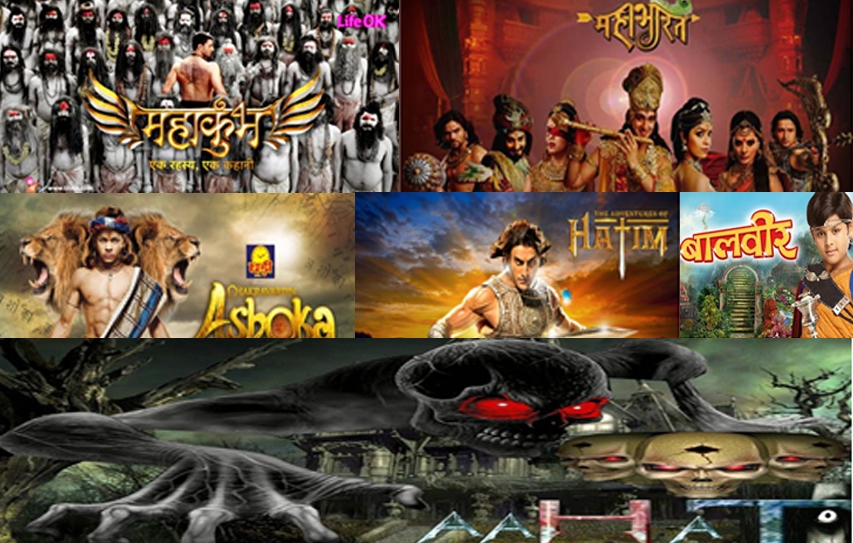 Just as channels and producers are exploring new content, so too television screens are taking on a new look most of the time. What leaps out of the screen is a barrage of VFX images and stunning visual effects.
In 1997, India’s TV viewing child population found their first super hero and a package deal of special effects with Mukesh Khanna’s Shaktimaan which was aired on Doordarshan. Playgrounds emptied out around noon – Shaktiman telecast time. Initially, VFX was perceived as ideally suited for mythological serials like Devon Ka Mahadev, Shree Krishna, Bajrangbali, etc. India has no dearth of divine characters and stories about them. So for most channels, a serial on the divinities guaranteed eyeballs. Nothing as yet offered the VFX professional a challenge.
Television content providers in India soon started considering using it for retelling epics, sci-fiction, mythological thrillers or historical sagas which along with well developed narratives are enhanced with an armoury of high-end visual effects and CGI.

1.Mahakumbh- Ek Rahasaya, Ek Kahani is Indian television’s most authentic mythological, supernatural thriller. It has fused mythology and the supernatural with modern day technology, espionage and the perennial power play for supremacy over the world. The high end VFX has placed it second to none. The stunner is the depiction of the chakras being activated.

Though the CGI and VFX can be placed on par with Hollywood, the latter will not be able to hold viewers with the chakra sequence, for chakras are in the Indian DNA. Mahakumbh is treading territory which hasn’t been explored on Indian television so far. Mahakumbh has written a new chapter in the history of Indian television content.
2. Mahabharata (2013) was the first epic mythological saga on Indian television to not just explore the use of VFX, but give it a starring role. Among the superlative scenes was Takshak’s abode, subtle lighting highlighted his get up and the CGI created ambience; prior to which was the invasion of the nagas.

The war scenes were masterfully done, recreating the havoc with as much as a stroke of the software. Hastinapur never looked so stately. Without VFX it wouldn’t have been possible to give a new skin to a much retold epic. The CGI was the super hero in Mahabharat.
3. Chakravartin Ashoka Samrat, Colors’ historical saga also relies heavily on CGI and VFX to recreate the regal ambience which marked the golden era in ancient India’s history. The stately appearance of the lion, a symbol of Chandragupta Maurya, and the recreated landscape of Magadha are an eyeful of architecture.

High-end VFX technology plays a major hand keeping the vviewers engaged. Considering the visual feast of plush interiors and stately palaces and dwellings, with a touch of Greek culture, it is obvious that no expense has been spared in recreating a golden age in India’s history.

4. Aahat is a prime example that the genre of supernatural horror that thrives on VFX and CGI. The longest running  horror series on Indian television, premiered in October 1995, has completed five seasons and is now in its sixth. Many leading film actors and actresses have appeared in some episodes, e.g.:

Om Puri, Mandira Bedi, Tom Alter, Ashutosh Rana, etc. The draw is not the star value or the content – it’s the CGI created spine chilling thrills. Viewer loyalty cannot be attributed to anything other than the thrills and chills, courtesy the special effects team.

5. The Adventures of Hatim and Bal Veer meld live action with special effects. These two shows pulled in young eyeballs with their fantasy filled adventures which spring out of TV screens with awesome monsters, fire flinging witches and conjured up thrills in Bal Veer.

While, Hatim had doorways suddenly emerge out of the arid landscape (CGI of course) that would lead to a fantasy land.

That was just a tip of the iceberg. Though both these shows, are heavily dependent on VFX, they haven’t offered the VFX professional a mega challenge. But young audiences have lapped up the visually arresting fantasies.