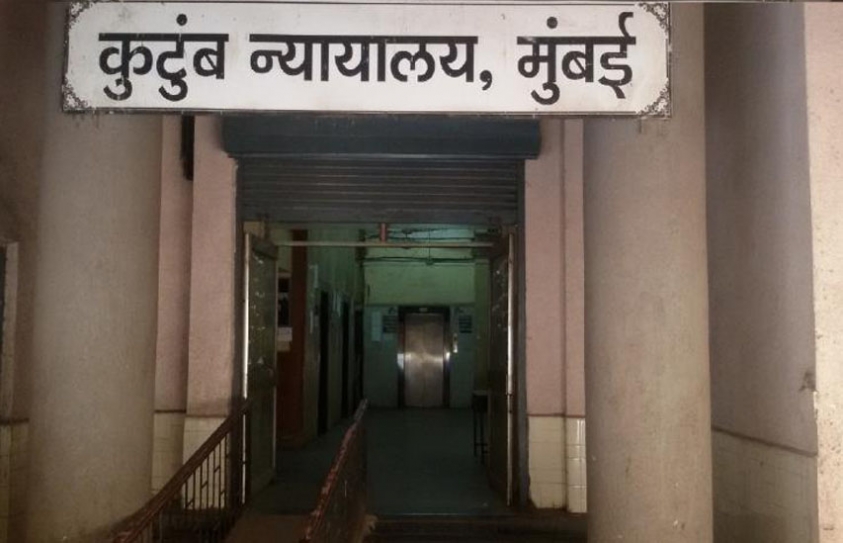 I reached a little after 11 a.m. the hour family courts open in Bandra East. In the lobby stood my husband’s assistant. Seeing me, the man quickly shifted his gaze.  Already the place was overflowing.  A door leading to the courtroom was slightly ajar with the Judge facing us.  His chair was placed on a higher level.  Chairs for litigants, were lower to his.A man in blue shirt, profusely sweating guarded the door.  I walked up to him, wanting to know if my matter was on board.

“It will be written down,” he mumbled to no one in particular.

I found the typed court notice sheet filled with the day’s matters, glued to the wall spotted with brown betel juice.

Our matter was No. 20. It could take all day or no time at all. Returning to the lobby, I realized that the crowd had swollen in my two-minute absence.

I tried to find a wall to lean on but all walls were leaned-on.  For a whole minute I agonized – deciding whether to stand where I stood, or squat on the floor which too was getting full every second.  On one bench only women sat.

Many turned to look at me, the standing woman.  I moved closer to a bench directly opposite the courtroom door.  Before me stood a fat man with a peasant’s cap, taking too much space.  A woman got up from the floor towards the same bench.  She stopped midway to ask:

“We can both manage.”

Suddenly there was lot of room.  Next to me, a young woman with hair cut short, red painted nails, was reading “Strangers into Lovers”.

The fat man looked at my elderly female neighbour.  Did they call out his name?  My neighbour answered making non-committal sounds.  The fat man walked away, and then he disappeared.  The young girl with the romantic novel got up too.  She had found her lawyer.  More women were coming in.

Some with heads covered by the saree end, bright red dots on their forehead, and thick silver toe rings.  Expressions of intrigue, confusion, fear, wonder on their faces.

The women sat on the floor as though they had done this ritual for years; spoke inaudibly, their eyes fixed on the door leading to the Court.

A typewriter machine ran non-stop-clack, clack, clackity….  Men stood in pairs greenish legal briefs bulging under their arms.  Two men smile a lot, their hands in pocket.  Another man brings a folded paper, handing it to the women on the floor seat.

The man at the courtroom door turned his mouth into a loudspeaker to announce, as his chest expands when he calls out the names-

There is stir.  People move closer to the court door.  Another name is announced.  No one responds, but all heads turn 360 degrees.  The crowd near the door stays there, limbs taut.  The fat man is back.  His mouth moves with the betel leaf lump, moving from right cheek to left.  The man at the door in blue announces again:

A man and a woman break away from the crowd, wound into action towards the Court door; it opens to swallow them in before shutting back.

Typewriter sounds continue.  You hear it now, you don’t the next minute, but it is there all right.  The fans above our heads are noisy.  They are nine in all.

A delicious sense of tranquility silently steals over me.  I shut my eyes and yawn continuously.  I wish I could leave and hide in a corner away from these eyes.

My matter may take a day, a year, five or six years.  My ears drum with loud announcements.  The nonstop typewriter noise resembles a low firing squad.  I yawn.  I feel like a yawning lion from a film logo. My eyes are covered in a thin veil of mist.

I want to leave but I cannot go.

I am stuck to the bench.  My feet are heavy, the mind, vacant.  A young woman just walked in.  Cheerful surrounded by women of all ages, in swaying long plaits.  The younger woman is inquiring about her matter from the clerk.  She speaks confidently.  She does not hear the typewriter firing away or the roar of the ceiling fans above.  She is young, full of herself, or ideals that have nomeaning for me anymore.  Suddenly, a woman leaps up when she hears her name, knocking people out of the way.  I wish I could change places with someone or other.  I want to leave at once.

I was struck on the bench.  My feet dare not move.  My mind was invaded by sounds – roaring fans, typewriter firing, names I do not know, and voices I want to forget….  I cannot move nor leave

I feel I have lived in this place and will live there forever, without moving or getting free of the bench, the typewriter, the fans, these people, briefs, papers, smiles I do not understand.

I have turned into someone else, a being unknown to me, my dreams have vanished, leaving me wide – awake to a reality where I don’t belong.

Twice or thrice the human loudspeaker called out my name I heard it as though it was another’s.  I rose to my feet, towards the courtroom.  At the other end of the bench, separating us, stood my former husband’s assistant, eyes averted.  He presented papers to the judge.  In these were a few personal letters to my husband, written in moments of frustration and anger. Papers which were evidence of my hysterical temper, my greed for material possessions, and my uncouth nature.  I did not have papers to offer as evidence of those years of our marriage, its bruises, the humiliation of being a slave wife, these were invisible marks upon my soul, still fresh as though it was yesterday – felt by me, unshared.

As I stood in that room, its benches full of eager women, their anxious relatives, I began to question the very reason for my being in court.

What did I seek?  Justice?  Peace of mind?  Compensation for those years spent in raising the children, running a house on borrowed time with not a word or gesture of …….?

Was justice a piece of green ledger paper, stamped by the red wax?

This inward journey cleared mental cobwebs.  I took a hard look at reality.  I got to know the husbandless, jobless, homeless me.  That me standing in a courtroom, waiting to receive what was a concept, an abstract notion, a myth – perhaps even a few rupees given under legal obligation to a wife.

Reaching home, I was about to destroy those green ledger papers from court that carried the life of two individuals, a husband and a wife, drafted in a language no one understood.  As my fingers touched the papers, they softened, made vulnerable with time, I felt destroying them was futile violence.  I gave these papers a new shelter, housed them in the remote end of my wardrobe – as a reminder of a time gone by – that I was once a wife and a mother – before I became myself.