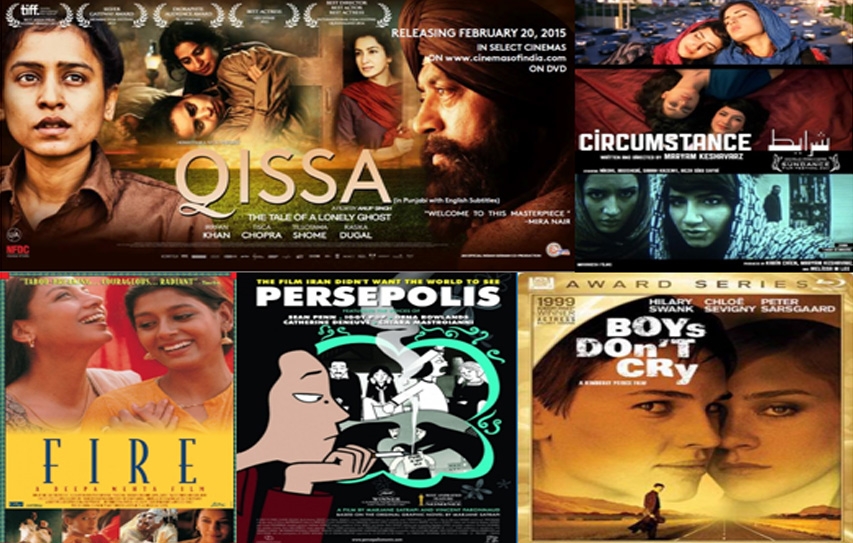 We all want to or have at some point wanted to cast aside the veil that shrouds questions pertaining to sexuality. Put the patriarchal hold on gender along with its ascribed behaviour into the mix and you have a potent combination to facilitate restraint and rebellion. Cinema showcases the struggle in these themes with films that hit the right note with just the perfect dash of ‘brazenness’ to drive the point home.

This month’s top five lists five films that have generated controversy and acclaim in equal measure for their bold forays.

1.Qissa (2013, Anup Singh): The post-Partition drama has Irrfan Khan playing Umber Singh, a Sikh patriarch, obsessed with having a son after two daughters. When his wife (Tisca Chopra) delivers a third daughter, he regresses into a fatal denial and raises her to be his son – Kanwar Singh (Tillotama Shome).

This crisis of identity has far-reaching repercussions for Kanwar, especially when village belle Neeli (Rasika Duggal) comes into the picture. Believing Kanwar’s masculine façade and falling in love with it, the story takes a shocking turn for the couple.

Qissa takes an unflinching look at the gender politics and the transgressions of forbidden relationships. Despite a climax that may puzzle an audience accustomed to more accessible cinema, Qissa is a brave journey of two women navigating their path in a society that will not condone their non-conformity.

2.Circumstance (2011, Maryam Keshavarz): Banned in Iran for its “distorted depiction of the country”, Circumstance is about two girls, Atafeh (Nikohl Boosheri) and Shireen (Sarah Kazemy), who attend secret booze-fueled parties, go to dimly-lit nightclubs, all in hiding from the watchful eyes of the moral police.

Things get complicated for the two friends when they explore their feelings for each other, even as Atafeh’s brother Mehran (Reza Sixo Safai) rediscovers his faith in a fundamentalist way and wants his family to toe the line as well…

The lack of fulfillment brings them closer, unleashing a torrent of emotions neither saw coming. Much like the aforementioned Circumstance, Fire is about the hardships and consequences that emerge when same sex relationships do not find recognition under a stifling culture. It faced much censure upon its release, but is emblematic now of Indian films that artfully deal with homosexual love and a woman’s perceived role in society.

The film’s protagonist grapples with his sexual identity – though born a woman under the birth name Teena Renae Brandon, he yearns for a different gender. After a troubled past and moving around, his blossoming romance with Lana Tisdel (Chloë Sevigny, earning an Oscar nomination) is cut short by his brutal rape and murder. In real life, Brandon Teena’s murder led to a lobby for introducing hate crime laws in the United States.

5.Persepolis (2007, Marjane Satrapi, Vincent Paronnaud): Also a graphic novel of the same name, Persepolis chronicles the life of Marjane Satrapi as she is raised in the Shah’s iron-fisted reign of Iran, determined to see him overthrown.

However, despite a change of guard and governance, the living conditions and the sanctions on the citizens worsen. Fearing her arrest because of her rebellious behavior, her parents send her to Vienna where she tries to find meaning in her identity and existence. Those who have not seen the animated feature must prepare themselves for one woman’s incredible crossing from a conformist to a free-spirit.

With these films, we wind up this month’s top five movies. Until next month with another pertinent topic, The Daily Eye and this columnist sign off, wishing you, dear reader, the best for the month to come.