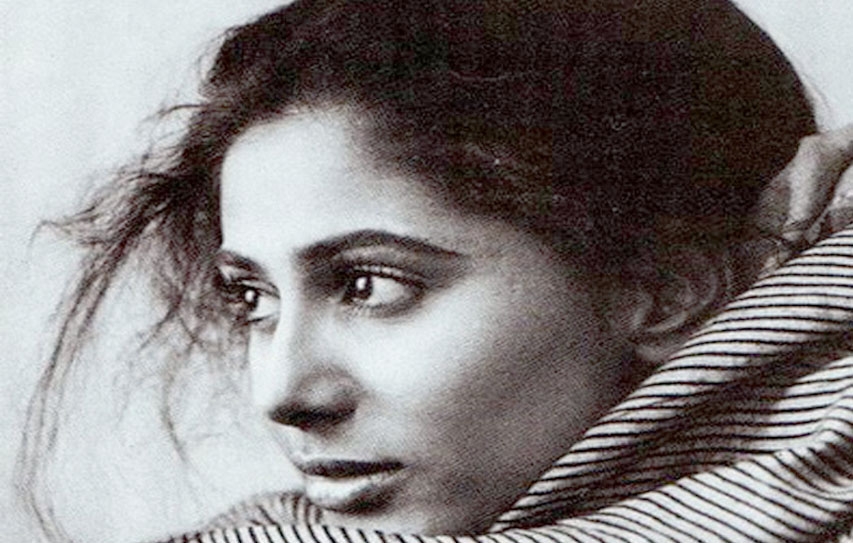 A Personal Tribute To Smita

That was sometime way back in the seventies. I still remember the two young women in our Tashkent film delegation who were fashionably late for meals, meetings; who giggled a great deal and stayed aloof.

Raj ji( Kapoor) was heading our delegation with Bombay's film luminaries
including Shashi Kapoor, ShyamBenegal, Gulzar, Basubhattacharya, Shabana Azmi and the two young women I just mentioned, SmitaPatil and VarshaBhonsale. Smita was late even checking in and during the 6 hour flight to Tashkent we hardly exchanged a word, not even a civil “hello”

At Tashkent, the two women - Varsha and Smita - kept to themselves.
But one night a tipsy Varsha confronted me for of being a snob !! I was aghast at this unfair allegation! But within minutes she cracked up- and hugged me. It was a moment of pure merriment. The ice melted at once. That moment also heralded my permanent tryst with Smita's. and we never looked back until her devastatingly tragic death shook the ground beneath my feet.

However, when we met in USSR, under a festive sky death and parting was nowhere on the horizon; that trip was to remain memorable for numerous little anecdotes…but mostly for the gift of friendship with Smita. A friendship that was confirmed over walks, a simple daalchawal dinner with local Indians when Smita longed for varanbhaat, for our unexpected two day holiday in Moscow which materialised magically out of thin air as. It happened when our return flight to India from Tashkent left without us! Raj Kapoor, the delegation head forgot to inform his flock about the return flight the next morning. The entire Indian delegation was stranded in Tashkent, with no flight until the another week. Rajji who never woke up mid morning came down wearing a big grin and hearing the debacle simply eased on a sofa as if noting had happened !!! All around were the other delegates tearing their hair. In the former USSR, Raj Kapoor was virtually the Czar. He could do anything – and that is exactly what he did. A chartered flight was promptly ordered to take us back. But via Moscow.

At sundown before our return trip we went for a walk in the pine forests. All of us longed to eat simple home food. And I managed to do that; yes, that trip was truly unbelievable, bonding with Varsha and Smita, and those two extra days in glorious Moscow. Unconsciously, I had taken on the part of elder sister, much to their delight. The three of us pledged everlasting friendship that began to blossom on an alien land. Both Smita and me lived upto our promise... I saw a lot of Smita as years wore on.

By early 1980s I was getting closer to the women's movement and closer to my inevitable divorce.

Concern for women always topped Smita’s priority. Hearing about the women centre’s work of supporting women where I volunteered, she decided to visit our tiny rented Vakola office .Women's faces lit up seeing a real star sit with them as if it was her daily routine. Smita felt deeply committed. Enough to promise finding a more suitable place to house the Centre. Jabbar Patel’s woman centric film, bi lingual UMBARTHA/SUBAH was going to release in 1982/3. Smita pledged to give us the SUBHAH premiere show to raise funds. Not only did she give us the Charity premiere – she got Amitabh Bachchan to attend the show along with his wife Jaya our chief guest. What a wonderful night that was! Women celebrating all night; and the women’s centre moved into a bigger office with her unstinted help.

On the personal front, Smita spread her safety net during the dark lonely journey towards my liberation struggle. Her Carter Road flat was my second home. Her telephone line open 24x7 to make long distance calls to my daughter in boarding school...she became the one woman support structure for me and my youngest daughter Anwesha who grew up wearing Smitaaunty’s hand me down woollens. Smita’s encouragement made me seek legal redress. There were endless acts of unconditional generosity I recall gratefully as we bonded like sisters born to two different mothers. On my part, I continued to be her older sibling, during her pregnancy, her dark unresolved moments…

I am not here today to dwell on her phenomenal gift as an actor. Her extraordinary versatile array of roles she accomplished flawlessly. Except to say that whether she played Savitri, the betrayed wife , or a fictional HansaWadkar (Bhumika) the ebullient young prostitute Zeenat( MandiI) – or the feisty tribal in Manthan whatever her screen role, she invested them with her blood and sweat. She was all of them and yet spectacularly original. Original as an individual, as an artist. As a woman she, was uniquely splendid.

She would have been 60 autumns old this October 17th; but life allowed her only half time. The curtain call came far too early for this friend, my sister Smita.

I celebrate our friendship once again fondly, with a special sense of pride.