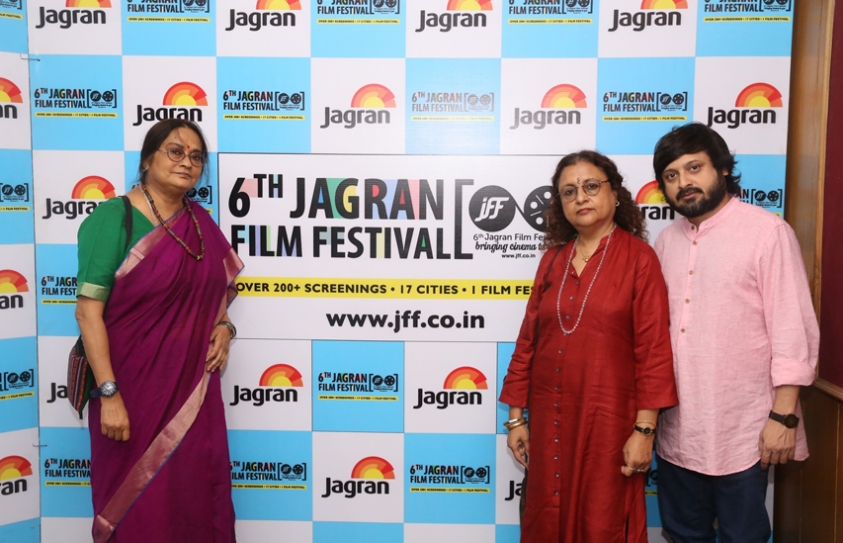 India’s largest travelling festival attended by more than 20000 participants and film lovers at Siri Fort Auditorium Delhi over the last 5 days, set to move to Kanpur and Lucknow

Delhi, July 05, 2015: Curtains were drawn on the 6th Jagran Film Festival, but not before mesmerizing film lovers at the Siri Fort Auditorium in Delhi on its 5th day with a noteworthy selection of movies, master classes and memories to cherish. The mega festival came to an end with the screening of Kaun Kitney Paani Mein, a satirical film, which was attended by eminent film personalities like Gulshan Grover, Saurabh Shukla, and Kunal Kapoor.

The last day of this never-seen-before film fiesta opened with the 2011 award winning American comedy-drama film The Descendants under the Country Focus. Soon, the Siri Fort Auditorium resonated with cinematic expressions of modern day Indian film makers with Bengali Film Bela Shesha, Detective Byomkesh Bakshy and DirectorPushpendra Singh’s Lajwanti under the Indian Showcase. The vibe of joy continued till the very end with films such as the 1965 Dev Anand-Waheeda Rehman starrer Guide. The World Panorama served to be an unforgettable treat with Juanfer Andrés – Esteban Roel’s Spanish melodrama Shrew’s Nest and Andrei Konchalovsky’s Russian film depicting the story of the people of a remote Russian village, Postman’s White Nights. Not only that, the screening of Sriram Raghavan’s action crime thriller Badlapur turned out to be a star-studded affair with actress Divya Dutta and director Sriram Raghavan gracing the occasion.

The spirit to disseminate film related insights and help those genuinely interested in movie-making march ahead, continued on day 5 too. A 90 minute master class withSomnath Sen of Leela (2002), Faisla (2005) and Gora (2012) fame on How films are made spanning the entire gamut of film making from ideation till its executionhelped film lovers learn the nuts and bolts of film making. Mayank Sekhar conducted a session with Juhi Chaturvedi, Bollywood script writer of Vicky Donor fame and an acclaimed advertising professional, who touched upon various nuances of script development for the big screen.  The workshop with casting director Mukesh Chhabra was particularly for the ones with a flair for acting.

Film lovers reluctantly bid farewell to India’s largest travelling film festival, ‘Jagran’ that presented some of the finest works of cinematic geniuses and featured a notable selection of Indian and world cinema classics and contemporary films. This year’s Jagran Film Festival exceeded its own benchmarks set over the last five editions. India’s only travelling festival in its 6th edition culminated on a happy note and promised to be back next year with another edition of films, fun and interaction at its best.