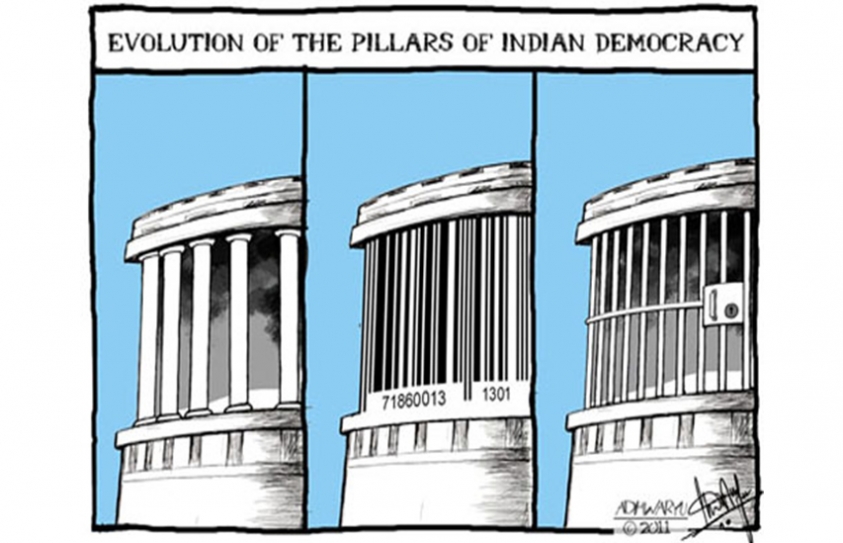 The notion and practice of power is arguably what creates and maintains large societies. Since the role of government is conceived to be so integral in safeguarding our society, it is only natural that government is often associated with power. Democratic government structure in theory creates a feedback loop of power; government as an institution is powerful but the ability of the government to wield its power is determined by the legitimacy accorded to it by its people. It is therefore true that legitimacy and power are very intrinsically linked. In recent times, due to gross mismanagement and corruption on the part of the Indian government one sees erosion in public support of the government. This erosion is essentially a loss of legitimacy and hence a loss of power. This has created a power vacuum and as Aristotle quite aptly stated “nature abhors a vacuum”. What this implies is that other democratic institutions, which ride the wave of public opinion have started to occupy this vacuum. Creating a shift in our power structure, this has major implications for the way in which our democracy is practiced.

As one continues along this line of analysis, it is important to identify and discuss what is popularly described as the ‘three pillars of democracy’. Broadly these are the Legislature, the Judiciary and the Executive. Put simply, the legislature debates and enacts bills to constitute the law, the judiciary defends and interprets this law and the executive carries out the administrative functions required to bring these laws into action. To put this into further context; the legislature is headed by the prime minister, the executive by the president and the judiciary by the chief justice.  In India, where we adopted the Westminster system of democracy from our former rulers; the legislature has traditionally been the most empowered pillar of the three. This encompasses the upper and lower houses of parliament and is what is popularly referred to as the ‘political class’. The fact that the legislature has the power to impeach both the president and the chief justice is testimony to its superior power.

As India took the bold decision to liberalize in 1991, the license raj was abandoned for its stifling impact on Indian industry and India faced a sudden surge in economic activity and investment. Unfortunately the license raj left behind a disturbing legacy of corruption and crony-capitalism that flourished during the boom period. With a growing and increasingly vocal and empowered middle class, it was only a matter of time until citizens would question why their taxes were being so blatantly squandered. In addition, the so called ‘boom’ fostered the rise of giant corporations while millions of MSMEs (Micro, Small and Medium Enterprises) closed down due to hostile market conditions. The increase in inequities, coupled with increasing social unrest made it clear that the government was failing to preserve the wider interests of the population.

The Common Wealth Games hosted by us in 2010, far from creating national pride, actually proved to be a huge embarrassment. It was mired with irregularities and the CAG(Comptroller and Auditor General of India) estimated a whopping 2300 crore loss to the exchequer. This was perhaps the first time that the CAG had come to prominence, but in the years to follow it has played a pivotal role in exposing a string of scandals like 2G and Coalgate. The Judiciary too stepped in to play its regulatory role and tried a number of senior politicians that subsequently were imprisoned. By pronouncing harsh sentences for a number of high-profile politicians including Lalu Prasad Yadav and the daughter of DMK leader Karunanidhi; the judiciary has proclaimed through its actions that no one is above the law. This sense of equality before the law has shown citizens a possible recourse towards true justice and a more balanced power structure. By appealing to popular sentiment in this manner, executive bodies such as the CAG, CIC, CBI and the Judiciary have garnered tremendous public support, legitimacy and hence power.

Being essentially a struggle for power, the legislature has recently come to loggerheads with the judiciary and the executive. Two incidents in the recent past are particularly telling. The CIC(Chief Information Commissioner) asserted earlier this year that political parties must fall under the ambit of the RTI(Right to Information Act). In a rare show of solidarity, every single political party colluded to oppose this ruling and resolved to amend the RTI Act.

In a landmark ruling on the 10th of July, the Supreme Court called for the immediate disqualification of convicted lawmakers that have been convicted for crimes punishable by a minimum of two years in prison. With almost a third of our members of parliament with criminal records, the implications of such a judgment are colossal. In a brazen show of strength, the ruling party clamored to water down this decree by pushing through an absurd ordinance to allow members to maintain their seat but give up their voting rights if they appealed to a higher court within 90 days. This ordinance was not only vociferously opposed on public forums and within the media but also by the opposition. The ruling party had no choice but to succumb to public pressure and recall the ordinance; along the way tarnishing its reputation further.

Albeit not considered traditionally as a pillar of democracy, the increasing significance of the Indian media requires careful reflection. The role of the media as a facilitator and beneficiary of the shift in power is particularly interesting. Having the ability to influence public opinion, the sometimes-overzealous Indian media has fuelled anger towards the establishment by sensationalizing and politicizing an array of socio-political issues. The media, including social media has provided a platform for disgruntled citizens to voice their apprehensions and resentment towards the government and has been the primary medium whereby a serious country-wide erosion of trust has been proliferated. It has thereby closely aided the creation of the aforementioned power vacuum and has also along the way capitalized on some of that power by positioning itself as the ‘voice of the people’.

While it is certainly a step in the right direction to disallow government from having unchecked power, it would be highly fallacious for us to believe that the battle for transparency and accountability is nearing its end. While the rent-seeking behavior of our political class has been particularly audacious, we would be doing a major disservice to our society if we fail to recognize that corruption exists at all levels even within the judiciary and executive. To overcome this exploitation of society and its resources, a shift in power to citizens is far more important than a shift between democratic institutions.

Furthermore the accrual of power to any one individual or institution is unhealthy. While the CAG has had a hugely positive impact on transparency, many would argue that certain allegations made have been indiscriminate. Moreover statements by the CAG about the amount of ‘loss to the exchequer’ have been slightly misleading. The CAG estimated the loss in the coal scam as Rs. 1.86 lakh crores; creating the public perception that this amount was stolen from our tax base when infact this was the projected sum of money that the government failed to raise due to mismanagement in the pricing and allocation of mining licenses. While having the benefit of fostering honesty, the spate of allegations has also contributed towards policy paralysis. Headlines across all newspapers speak of the surging food prices but what one doesn’t hear of is that our food minister KV Thomas is sitting on a stockpile of nearly 80 million tonnes of food grain. This perplexing situation has been created due to the food minister being afraid to set a price for grain; lest he be held responsible for a huge loss to the nation by not setting a price that is deemed appropriate. A similar policy paralysis occurs when institutions are at loggerheads. Analysts attribute atleast some of the blame for the poorly performing Indian economy to the long and rather public stand-off between the finance minister and the former governor of the RBI.

The abstract and socially constructed concept of power can be interpreted in a number of ways. Most individuals perceive power as ‘power over’ which inherently creates an imbalance since it implies that one individual or institution can influence the actions of another by possessing superior power. In the crazed pursuit of this narrow conception of power, society often forgets the impact of ‘collective power’ in creating better outcomes for everyone that partakes in this process. It is essential to understand this distinction because the institutional shift in the structure of ‘power over’ has been facilitated by an increase in ‘collective power’ of the citizenry.

This is perhaps where the most vital and interesting shift in power has occurred. A host of new channels have opened up for the public to partake in the political process. And this is not simply restricted to rallies or web-activism. The newly created Aam Aadmi Party that will contest the upcoming Delhi election for the very first time, has had a completely open and merit-based process of selecting their candidates for the 70 constituencies that they are to contest. This allows anybody, regardless of political affiliation or lineage, for the first time to enter mainstream politics and has so far attracted a variety of promising potential-leaders from a multiplicity of backgrounds. As Delhi heads to the ballot, one cannot help but draw optimism from the outcomes of past elections. Uttar Pradesh rejected BSP leader Mayawati after corruption allegations emerged and states such as Bihar and Orissa have acknowledged the progress made by their Chief Ministers by supporting their re-election. An optimist might say that it’s almost as though society is beginning to awake to the two-sidedness of power and subsequently hold leaders accountable to superior standards of conduct and integrity.