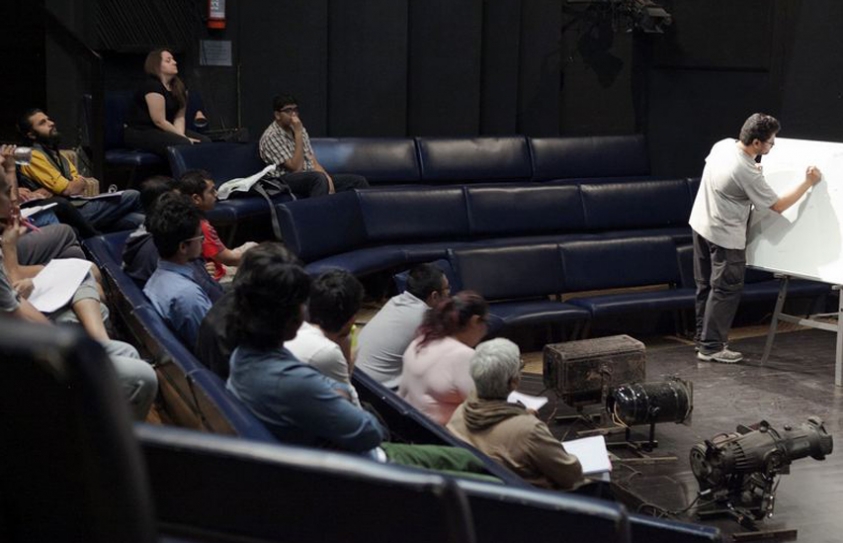 Mumbai, December 15, 2014: Monday the 15th marked the opening of theatre lovers’ favourite week as Thespo, the annual youth theatre festival in its 16th edition kick-started at the quintessential paradise of arts, Prithvi Theatre. Like every year, day 1 was buzzing with excitement when theatre lovers thronged to the iconic Prithvi Theatre to ‘Plug-in to the Tamasha’ as this year’s theme goes.

Team Thespo has handpicked 6 plays from a record 186 entries and curated the much awaited annual fix of plays along with 6 platform performances, 7 fringe performances including film screening and play readings, 15 workshops and 4 live music acts.

Day 1 opened with a daylong workshop of its kind, ‘Magic Hour by Arghya Lahiri’. As a seasoned theatre Lighting Designer and Director, Lahiri shared innumerable nuances of lighting theory, lamps, accessories, their uses and ability, lighting systems, rigs and an array of approaches to designing and executing light plans from his vast pool of theatre experience. The young of vibrant theatre wallahs welcomed the deep understanding and appreciation of a lighting designer’s role within the theatre as passionate flag bearers of Indian theatre.

‘Playing Comedy’ turned out to be a fun workshop when Imran Rasheed and Nitin Bharadwaj explored comedy in all its complexity. The young attendees gathered firsthand insights about the “pulse” of comedy through physical exercises, music, gestures and props and most of all the craft of making a character comic.

Thespo 16 is special in many ways. Besides bringing the best of plays from India as well as Sri Lanka and Canada, the landmark theatre fest is presenting a fabulous opportunity for young theatre fraternity to hone their craft and exchange ideas in a fun and collaborative way. The upcoming days are adorned with variety. Day 2 has in store an exciting line up with sessions such as ‘Collaborative Writing Workshop by Rachael Clerke’ and ‘The Aesthetics of Indian English Theatre by Mahesh Dattani’, along with an irresistible reason to sway to the acoustic folk and soft rock sounds with singer-songwriter and guitarist Shubhangi Joshi’s live performance.

Evening of Day 2 will unfold some not to be missed experiences such as an 80 minute play ‘Normal’ that presents a gripping account of the real-life German serial killer Peter Kurten. A noteworthy fringe performance on ‘Violence Against Women Project’ will mark 2 years since the Delhi gang rape and showcase how social media can be leveraged to as a catalyst to address sexual violence against women. A 30 minute platform act ‘Aparajeeta’ by Drashtaa India will present another shade of women voices through a monologue that unfolds a poignant tale of a woman who yearns for existence.

Launched as a platform in 1999 one-act play festival, Thespo has truly come a long way. The arts and culture carnival has consistently showcased great talent of young performers aged 25 years and under. Surpassing boundaries of nationality, languages and art forms, its 16th edition promises to be an occasion where all come together for the pure and simple love of theatre. As actors, dancers, musicians, writers, directors, enthusiasts and even first-timers meet on this dynamic platform, one can be assured of an invigorating and memorable experience like no other.

For Mumbai’s art and culture aficionados, it is a week marked in their annual calendars for an eclectic experience where arts, culture, music and meeting new people all unite to entertain, educate and enthral performers and theatre-goers alike. In short, there is something for everyone at Thespo. All one needs to do is – Plug-in to the Tamasha!

The 16th edition of Thespo, the annual drama festival for theatre-wallahs below the age of 25 is taking place from 15th to 21st December 2014. Organized by QTP, under the aegis of Theatre Group Bombay, it will be taking place in two venues this year: the iconic Prithvi Theatre, which has been the home of Thespo since 2008, and Sitara Studio, the city’s latest indie cultural space that used to stage Marathi plays back in the 1970s. The festival, this year, is centered on the theme ‘Plug-In to the Tamasha’. For more details, visit www.thespo.org.