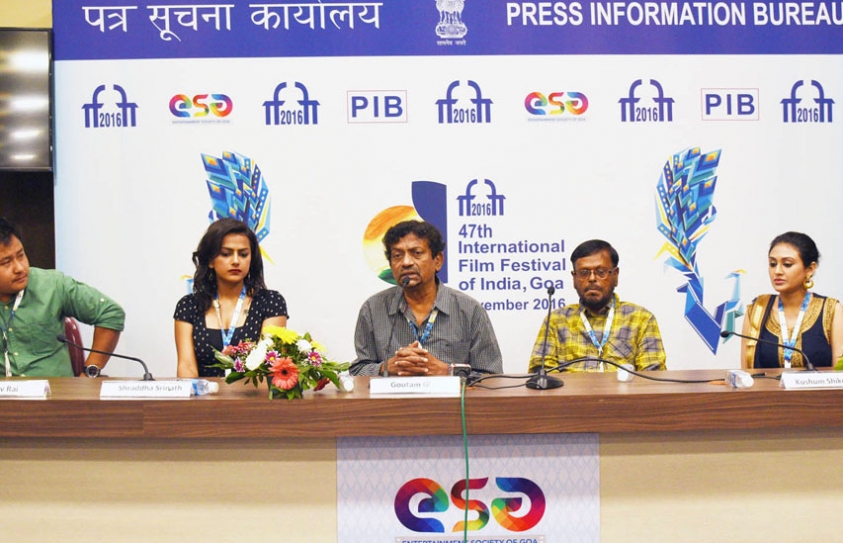 In ‘Meet the Directors of Indian Panorama’ press conference section, Directors Goutam Ghose, Pawan Kumar and Saurav Rai interacted with the media in Goa today. The Bengali film ‘Shankhachill’ (meaning Boundless), an Indo-Bangladesh co-production, directed by veteran Director Goutam Ghose, is based on a true story unravelling the stories of partition at the Indo-Bangladesh border areas.  ‘Shankhachill’ is an effort to create a bridge between the people of the two nations that once stood as one. The film is based on true stories as narrated by the Border Guards of the 2 countries.  The trial and tribulations of partition still continues in Punjab and Bengal, added the Director.

Ghose said it is perhaps the first film dealing with the contemporary problems on Indo- Bangladesh border, focussing on the issues faced by the people living near the border, where day to day life is hindered by fences in both physical and metaphorical ways. Desire for seamless border narrated through metamorphic expression of a bird that can fly without documents across the lands. Birds can fly without any documents, but humans cannot, he added. This is what needs to be changed by sending a message of peace, harmony and brotherhood through the film. Cinema could not change the world, but it could certainly record the collective memories of people.

As India gained its much-awaited independence in 1947, the people of pre-partitioned Bengal faced another struggle. The film is a human saga of a truncated land and how people are trying to relive their destiny. Furthermore, the film explores how the scar of Partition exists today and will continue for years to come.

Goutam Ghosh has made a number of prominent documentaries and has won 19 National Awards besides Film Fare and many International awards. He is also the only Indian to win the coveted Vittori Di Sica Award.

Pawan  Kumar, the Director of the a contemporary feature film ‘U-Turn’ said that this film is a mystery thriller based on traffic problems  faced by people of Bengaluru in their day to day life and the blatant violation of traffic rules. The name of the film, also taken for traffic violations committed while negotiating a U-Turn on a flyover. It was earlier premiered in the New York Indian Film Festival and received a good response. Furthermore, U-Turn completed 100 days in theatre as well. Lead Actress of the film Shraddha Srinath was also present at the conference.

Pawan Kumar started his career in the year 2000 through theatre and later moved to films. U-Turn is his third feature film as a director and was nominated for Best Screenplay at the NYIFF 2016.

Saurav Rai, Director of the film ‘Gudh’ (Nest), said that the film is all about his childhood memories in the backdrop of a struggle for a new state and an effort to recollect them as fond memories in the future. He said that the films he makes are related to him, his family and relatives and will continue to make such films, where he can connect himself to the stories and has the urge to tell those to the world at large.

Set in the backdrop of revolution for a new state (Gorkhaland), the film is about a 10 year old boy’s journey into the labyrinth of memories from his native village. ‘Gudh’ essentially cherishes those childhood memories, some obscure and some vivid, which we find hard to co-relate as time passes by.