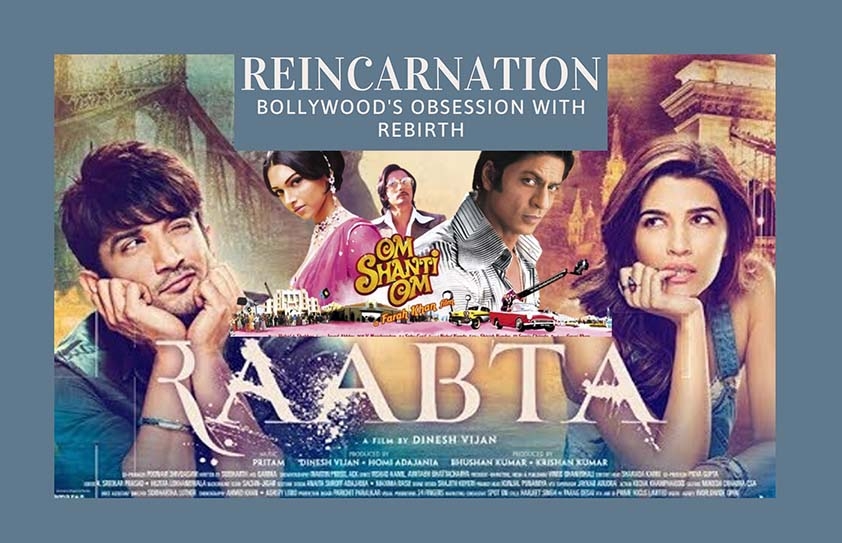 Film historian Dhruv Somani gives you a lowdown on the reincarnation films, some of which clicked majorly, while others nosedived

Today the subject is reincarnation, which has been recurrently used as a theme of Bollywood suspense thrillers.

The theme is considered a fail-safe bet to attract the audience, which largely believes in the idea of rebirth. Once in a while though, reincarnation has crashed at the ticket windows. Indeed, one of the recent examples is the slickly made Raabta, which showcased Sushant Singh Rajput and Kriti Sanon.

Could that have been a downer for the 34-year-old actor who ended his life tragically this month? The answer to that is a big no, since the charismatic actor had followed this film up with the extremely successful Chhichhore. In sum, then, no gratuitous conclusions can be arrived at.

Permit me to select nine films on Reincarnation which I have relished watching. Of course a whole lot have been attempted, the ones I mention here are my personal favorites. 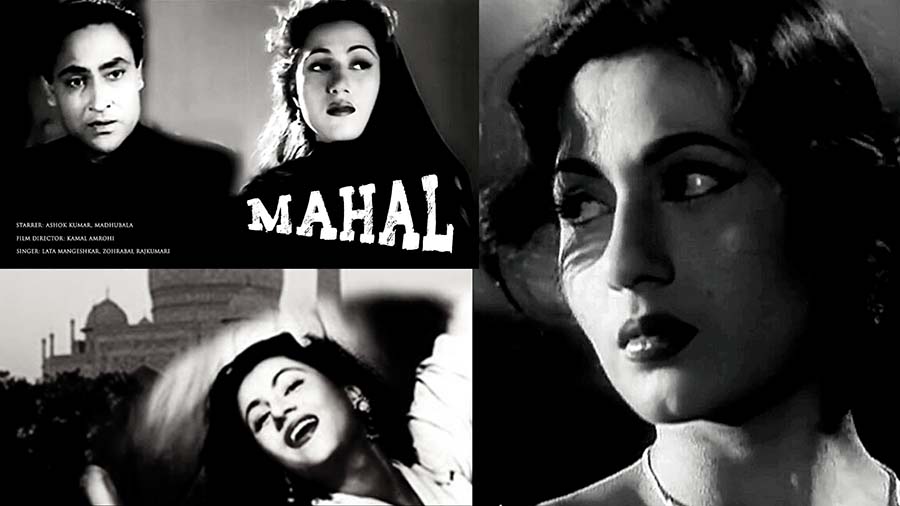 Mahal was India’s first reincarnation film and its super success prepared the stage for tackling mysterious and supernatural elements in Hindi cinema. It marked Kamal Amrohi’s debut as an independent director and was hugely responsible in elevating Madhubala and lead singer Lata Mangeshkar to super stardom.

Enhanced by a brilliant background music score, the song, which captivated the nation, was Aayeega Aanewala, Aayeega. One of the biggest hits of 1949, its plot was located at Sangam Bhavan, a crumbling palace of Allahabad standing opposite the Yamuna River. On account of heavy rains, one night an empty boat capsizes in the river while wails resound in the empty mansion.  Such stories keep the locals away from the Palace, which is now believed to be haunted.

Next, on a stormy night, a visitor (Ashok Kumar) arrives and is told of the eerie goings-on by the gardener. It seems four decades ago, an unknown man had begun the construction of the mahal. Every night he would arrive by boat and leave in the mornings.

Once it was ready, a beautiful woman began to stay in the mansion. She would wait all day, restless, until her beloved arrived, hail or storm, every night. That’s until his boat capsizes in the river and the waves carry the message, “Do not be upset my love Kamini, I shall return soon”.  Thereafter, Kamini sits on the banks of the river for her lover to return until one night she too drowns in a whirlpool and ever since then the love nest remained empty. The gardener tells the new owner Harishankar that since then he is the first one to visit the mahal. And the rest of the riveting story unspools. 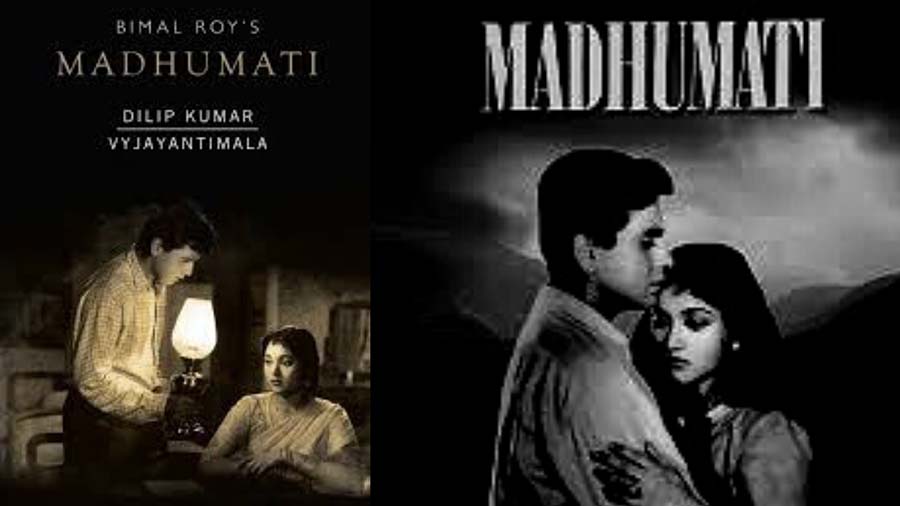 Here’s an all-time classic paranormal romance directed by Bimal Roy starring Dilip Kumar and Vyjayanthimala in the lead supported by Johnny Walker, and Pran in one of his most iconic roles of Raja Ugranarayan. Written by the famed Bengal director Ritwik Ghatak, its success was ascribed to excellence in every department of filmmaking, including an outstanding musical score by Salil Chowdhary.

The screenplay gets going with Deven and his doctor friend seeking refuge from an ongoing storm in an old abandoned haveli. A landslide ahead has blocked the road. When the friends knock on the massive door of a desolate mansion, the caretaker welcomes them with a lantern.

Once inside the haveli, Deven feels uneasy on noticing a black empty wall. He befuddles the caretaker by asking about the missing paintings from the walls. After a series of incidents, Deven is taken back in time where he sees himself as Anand Babu - a manager at the timber estate of Raja Ugranarayan who is in love with Madhumati – daughter of Panraja. Lust takes over; plans are on to kidnap Madhumati. The plot thickens when Deven meets a nurse called Maadhvi, Madhumati look-alike who agrees to solve the baffling mystery. The climax is a nail-biter. For more details on this masterpiece you might want to read the book penned by Rinki Roy Bhattacharya, daughter of Bimal Roy. 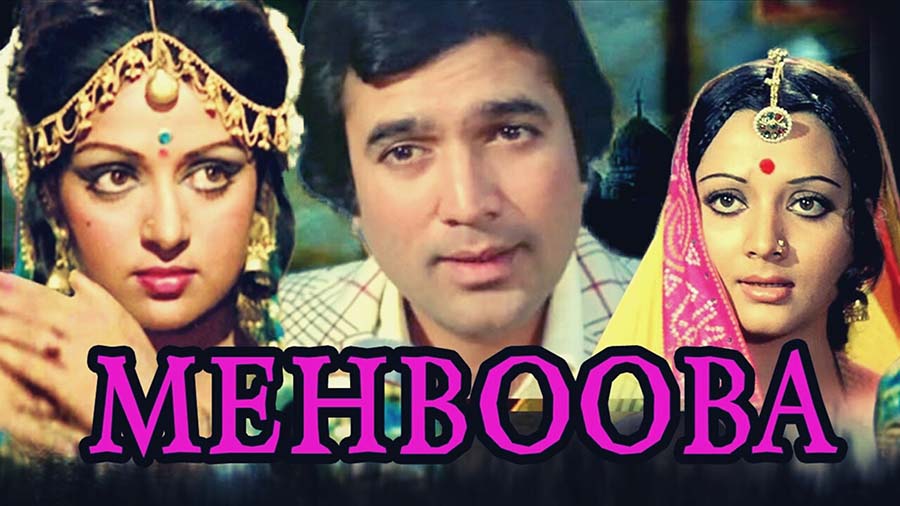 Directed by Shakti Samanta, Mehbooba was lavishly mounted, his sixth collaboration with superstar Rajesh Khanna. Hema Malini was the leading lady supported by Prem Chopra, Asha Sachdev and Yogita Bali. The story revolves around Suraj who, after getting stuck in a rainstorm, experiences strange feelings as if he has been at the spot earlier. Next, he finds himself in a different era in his earlier birth when he was Prakash, the chief singer at the emperor’s court.  Although a married man, he is deeply in love with Ratna, the court dancer.

The lovers are separated and killed. Hang on! He comes across Jhumri, a replica of Ratna.  Follow complications galore since the replica is engaged to Appan, son of the leader of the local tribe. The audience wonders if the separated lovers will unite somehow or are headed towards doomsday. The music score by R.D.Burman was excellent, especially the track Mere Naina Sawan Bhadon play backed in separate versions by Lata Mangeshkar and Kishore Kumar. However, that didn’t prevent this rebirth saga from tanking at the box office. 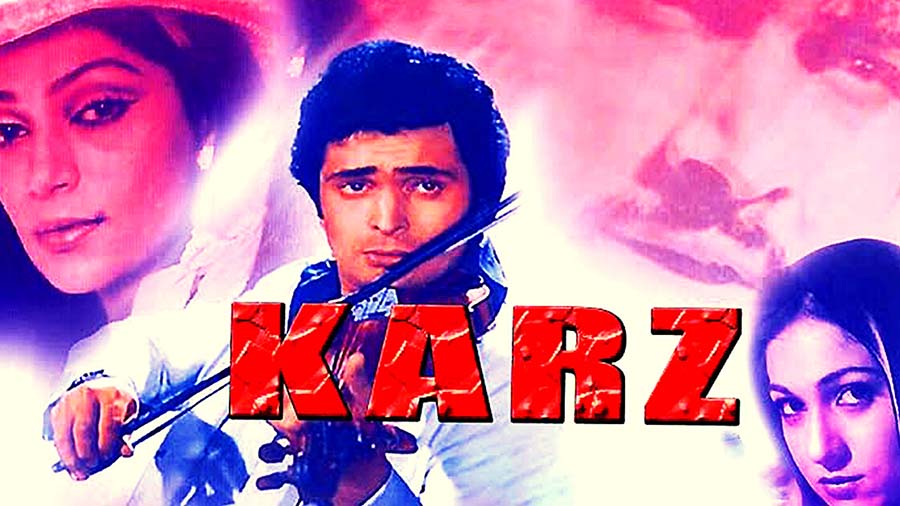 Clearly a cult film, it was believed to be adapted from Hollywood’s The Reincarnation of Peter Proud by Subhash Ghai. Despite the lack of originality, it turned out to be a sumptuous entertainer, redefining the careers of Rishi Kapoor, Tina Munim and Simi Garewal. Even the supporting cast comprising Pran, Raj Kiran and Premnath were assigned sharply etched roles. Laxmikant-Pyarelal’s zingy music played a vital part in contributing to the film’s success.

The focus was on the cold-blooded murder of Ravi, a millionaire, by his gold-digger wife Kamini who is working for a criminal called Sir Juda. In such a scenario, a comeuppance is mandatory. Ravi is reborn as Monty, a popular singer who has hallucinations about his past life. Consequently he reaches the scene of crime and seeks to avenge the murder of his former avatar and make Kamini receive her just desserts. The finale was intricate and engrossing, demanding repeated viewings. Rishi Kapoor as Monty was pitch-perfect.  Needless to say a remake by singer-actor Himesh Reshamiyya was a major disappointment and that’s putting it mildly. 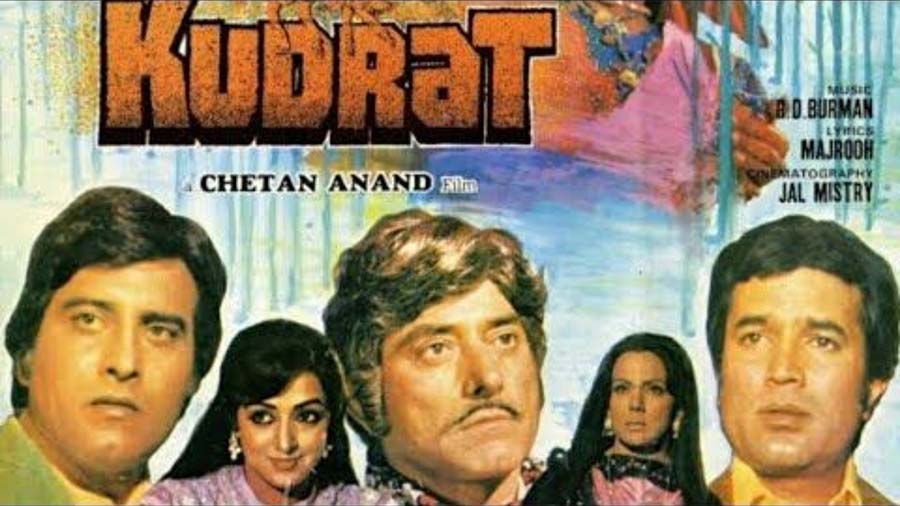 Rajesh Khanna a star who shied away from multi-starrers couldn’t refuse his mentor Chetan Anand (they had done Aakhri Khat together) and came on board opposite Hema Malini. Vinod Khanna was cast in an important part while the director’s favorites Raaj Kumar and Priya Rajvansh added star appeal. The unit was taken to Shimla for the shoot in different seasons to photograph the beautiful hill station.  Hema Malini played  Chandramukhi who suffers from hallucinations of her past life, sparking much high drama.

The second half of the script ventured into the space of a courtroom drama and delved into the subject of past regression. The confrontation court scenes between Rajesh Khanna and Priya Rajvansh were impactful and the finale was credible. Music by R.D. Burman was of the highest order and included that memorable number Hume Tumse Pyaar Kitna, play-backed by Parveen Sultana. Indeed, I’d say Kudrat is a film that should be revalued and given its due status as one of the best in the reincarnation genre. 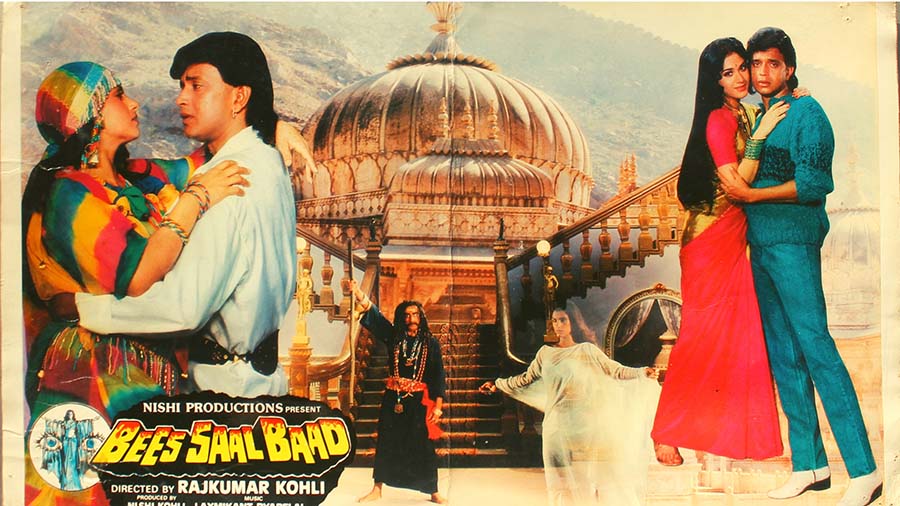 Not to be confused with the classic mystery movie Bees Saal Baad with Waheeda Rehman and Biswajeet, this endeavor directed by Rajkumar Kohli was not a typical horror film. Rather it was a family drama, which weaved in a strand of reincarnation and the supernatural.

Meenakshi Sheshadri played the main protagonist while Dimple Kapadia was a spirit who would go to any extent to get her desires fulfilled. The ensemble cast featured Mithun Chakraborty, Amjad Khan, Anupam Kher, Shakti Kapoor and Aruna Irani.

The script dealt with Suraj and Nisha who belong to feuding tribal clans. After much ado, their marriage is sanctioned, but turns into a virtual nightmare. The goons of a lecherous Thakur kill Suraj. Nisha jumps to her death from the haveli.  No problem for the time being. The Thakur proves their deaths to be accidental. Twenty years later, he is dumbstruck on meeting his daughter Kiran who returns from London with her husband,  a replica of Suraj. The cue is on for revenge. The outcome had hummable songs, which were well pictured on scenic locations of Rajasthan and Gujarat, and this film turned out to be a silver jubilee cash-earner. 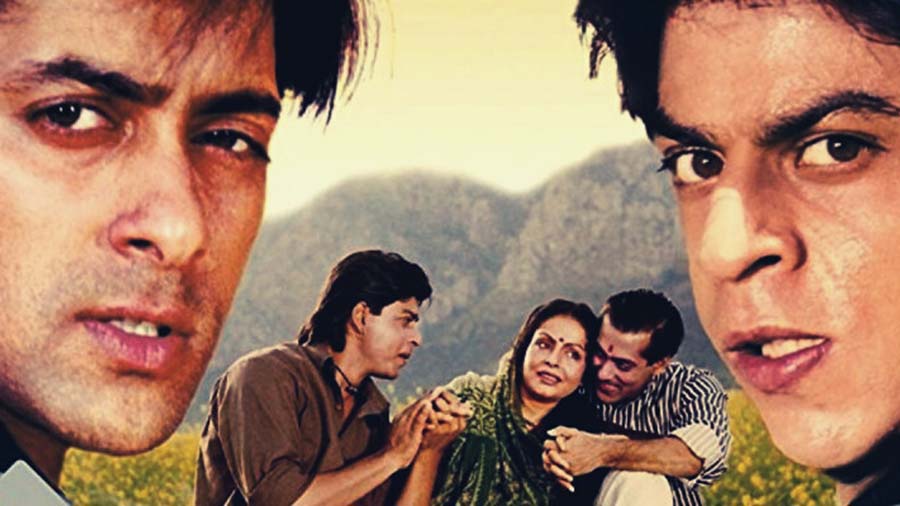 Set against a rural backdrop, it underscored the faith of a poor woman Durga who has faced great injustice: her sons Karan and Arjun were brutally killed by Thakur Durjan Singh and his two brother-in-laws. Yet she retains her faith in Goddess Kali. Karan and Arjun are reborn in different families and social backgrounds but by a leap of faith reunite with their mother of past life. They triumph in the fight against evil. Shah Rukh Khan and Salman Khan, supported by Kajol, Mamta Kulkarni, Raakhee Gulzar, Amrish Puri and Ashok Saraf, provided star power. The music by Rajesh Roshan was also appreciated. Trivia alert -- the film was initially titled Kaainaat. Ajay Devgn was supposed to play the role essayed by Salman Khan, while Juhi Chawla had been approached for the role enacted by Kajol. 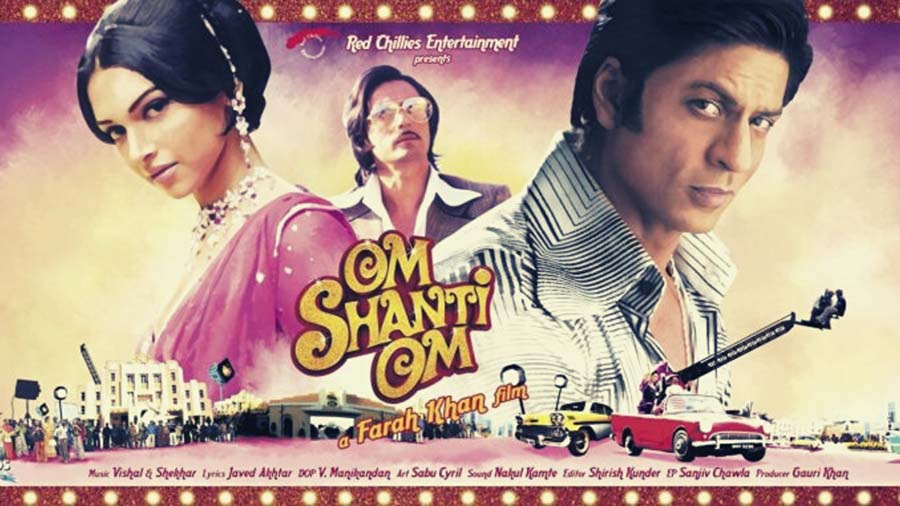 Choreographer Farah Khan’s second film Om Shanti Om was based around the film Industry. Junior artiste Om Prakash Makhija, passionate about his work, nurtures dreams about becoming a superstar and is infatuated with a top actress of that era Shantipriya. He saves her from a fire during a shoot, and overhears a conversation between her and a devious film producer Mukesh Mehra (Arjun Rampal). The heroine dies in a set-up fire while Om perishes in a road accident.

Three decades later, he reappears as Om Kapoor aka OK., becomes a star and has memory flashes of his past. He meets his mother and best friend Pappu and with their help manages to find Mukesh Mehra – with whom he collaborates for a film for which he signs a newcomer Sandy who is a replica of Shantipriya. Madhumati heavily inspired the climax. Yet the film for its zany comedy and slick treatment was a huge hit. Deepika Padukone became an overnight star. Incidentally, another film inspired by Madhumati was Janam Janam (1988) with Rishi Kapoor opposite debutante Vanita Goel. It was directed by Vijay Sadanah, but vanished without a trace. 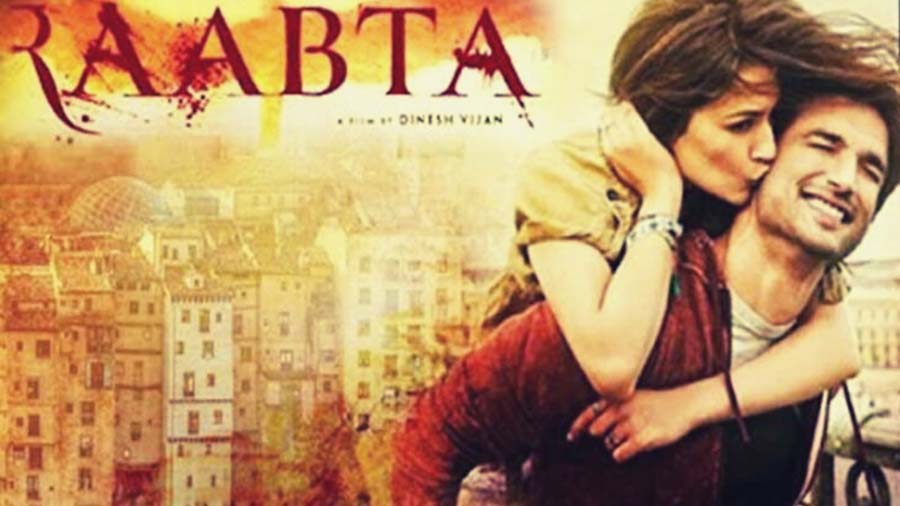 This action-love story based on the theme of reincarnation marked the debut of producer Dinesh Vijan as a director.  Sushant Singh Rajput and Kriti Sanon topped the cast with Jim Sarabh and Varun Sharma in the supporting cast.  The southern producer Allu Aravind who claimed that the storyline and characters resembled those of his film Magadheera sparked a controversy.

That apart, Raabta dealt with the carefree Shiv Kakkar who woos Saira Singh but the girl is haunted with turbulent scenes from her past life. Moreover she says she already has a steady boyfriend. The script becomes a bit of a tangle from this point. At the cash counters, it was a no-no. Yet there was something fresh and lively about the lead pair, making the result worth at least a one-time watch.