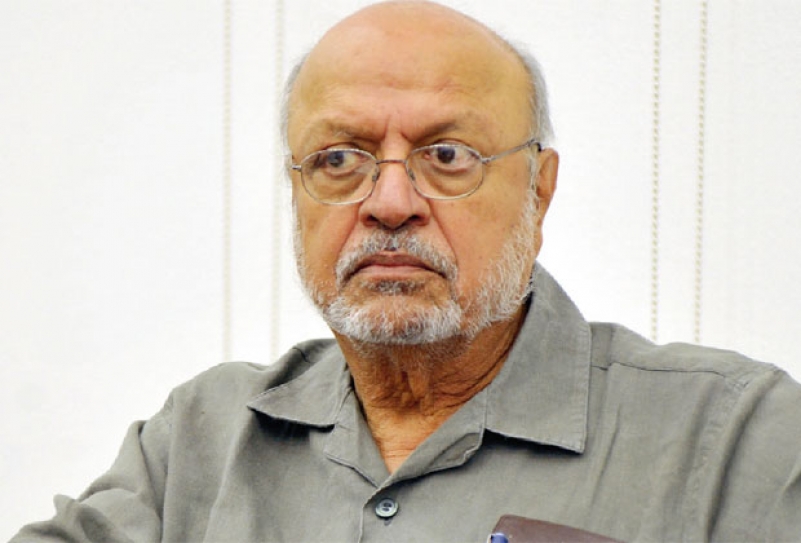 SAMVIDHAAN – The Making of the Constitution of India

As I watched the first episode of Shyam Benegal’s Samvidhaan – The Making of the Constitution of India, I was reminded that when we studied the Indian Constitution in college, we learnt the subject matter by rote, to score the requisite marks, rather than understand it, and regard it with pride. But Samvidhaan will change it for students from now on, that is if they can tear themselves away from their I-phones, I-pads, or what-have-you when the series is being telecast.

The first episode is a prelude to why and how the Constitution was created. It gives a brief insight about the division of the country into a Hindu India, a Muslim India and a Prince’s India, vehemently objected to by Sardar Vallabhai Patel, who was against fragmenting the country. The recent division of Andhra Pradesh is an ironical reflection; the very same state Sardar finally got to merge into India. It touched on the Pre-Independence events where the first stirrings of Partition are felt and the need for India and Pakistan to create their respective Assembly and Constitution. 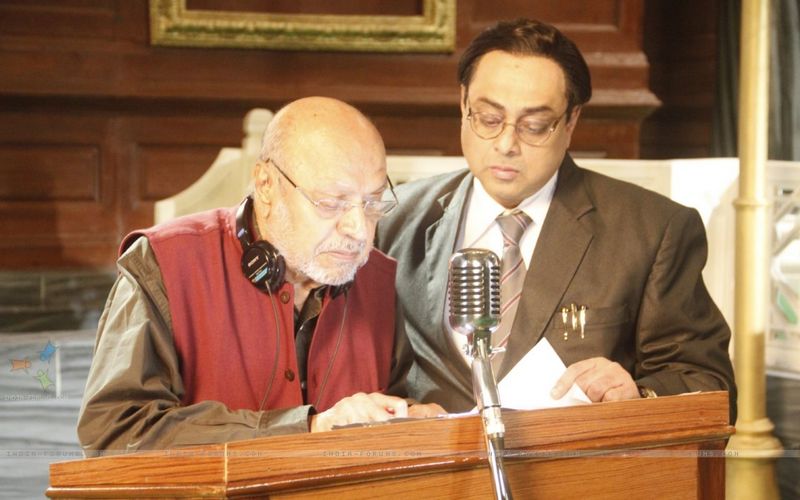 The show reel that followed was pre-cap of the 10 one-hour-long episodes of Samvidhaan. Each historical figure we have either seen or read about as students first like Pandit Nehru or Dr Rajendra Prasad, or Dr Ambedkar or Sardar Vallabhai Patel, Mahatma Gandhi; all come to life.

The narrator, actress Swara Bhaskar is part of the 150 strong cast which include the director’s trusted allies and a few new names:  Sachin Khedekar, Neeraj Kabir, Dalip Tahil, Utkarsh Majumdar, Rajendra Gupta, Tom Alter, Rajeshwari Sachdev, Narendra Jha, Divya Dutta and Ila Arun. Each actor has authentically essayed a well researched character, assisted with key props, prosthetics and makeup. Much of the action takes place inside the assembly hall, authentically recreated in Film City and covers the debates on the floor of the house. “The series reproduces many of the extraordinary speeches,  that were made by some of the leaders, along with  dissent and consensus,” Benegal avers. 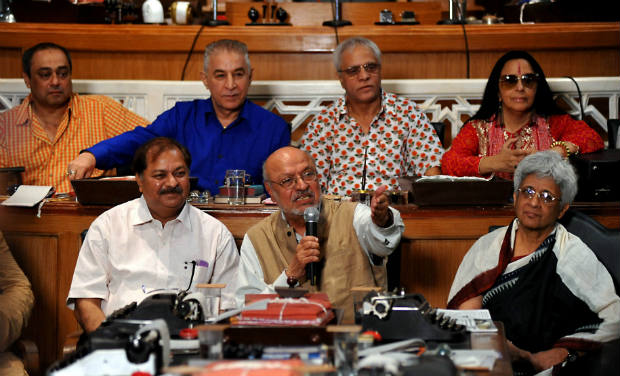 Samvidhaan recreates the Constituent Assembly of India that sat from December 1946 to November 1949. Audiences will understand the foundations of independent India as well as meet some of the architects of modern India. “Most of us know very little about how the Constitution was created,” Benegal says. “The process was marvellous, but except for a blip during the Emergency, we have remained true (to the Constitution) despite all the problems we have faced as a diverse country.”

Encapsulating historical events is a daunting task, but Shyam Benegal had mastered it   with Bharat Ek Khoj, a TV series he made 25 years ago. Both the episode and show reel   reveal that Shyam Benegal’s mastery is intact. Shama Zaidi, his long time script collaborator has co-scripted Samvidhaan with Atul Tiwari. The latter also plays Govind Vallabh Pant.  Samvidhaan’s real challenge lay in presenting the debates — long winded and sometimes verbose. They have been effectively and authentically dramatized into sequences which the viewer is able to grasp, and not grapple with. What the script writers have least contributed to are the dialogues, as those have been taken verbatim from whatever had been spoken on the floor of the assembly. 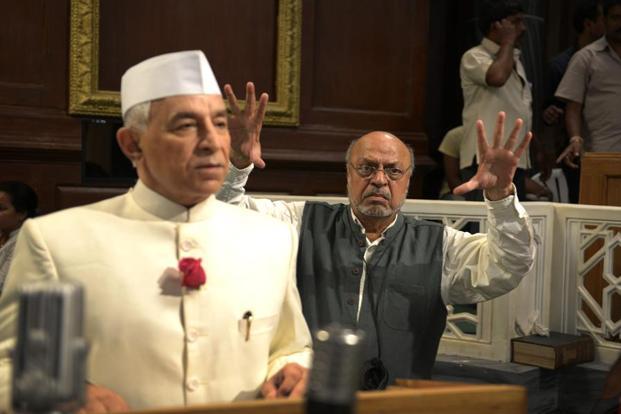 The episodes will present select sessions and issues such as the national language issue where Maulana Azad presents his case for Hindi or Urdu or Hindustani. Ambedakar’s thoughts on  political  equality v/s  socio-eco inequality. Or the rights of the ordinary man, and free compulsory education. As Jinnah demands a separate Muslim nation, a curiously ignored fact is revealed:  as Jinnah spoke in English, he would pause at points, while an interpreter standing beside him translated the Quaid-e-Azam’s oratory into Urdu for the benefit of  compatriots. This bit has never been shown earlier in films about the Independence struggle.  That meticulous depiction is Shyam Benegal’s hallmark.

During his tenure as an MP, he realized that “India has  a dynamic, democratic constitution; and  was   the biggest democracy in the world.” That enthused the director to make Samvidhaan, when approached.  According to Shyam Benegal, “the Constituent Assembly of India sat for two years, 11 months and 17 days to debate on and draft our Constitution. We   have taken a little less than that time to make Samvidhaan and tell the story of how our founding fathers and mothers fought against all odds to give a democratic shape to the destiny of India.” 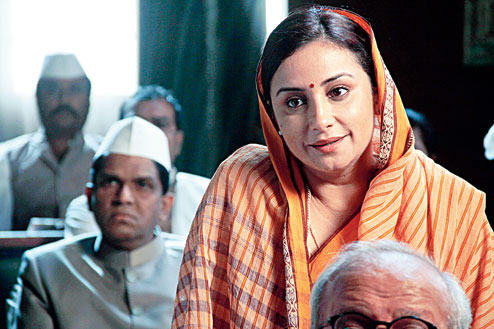 Benegal’s uncle, Sir Benegal Narsing Rau, wrote the first draft of the Constitution, and   the filmmaker carries the legacy forward by presenting it cinematically. Writer Shama Zaidi’s father Sayyid Bashir Hussain Zaidi was the last surviving member of the august assembly who sat between 1946 and 1949 to make the Constitution, died in 2008. “My father was a member in those heady days where dreams of a nation met with the opportunity to make it into a democratic reality through a constitution. I heard stories of those times from my father.” Despite her long career as a writer, she admits, “I had never had such an opportunity that was also a challenge. It was exciting and scary because you had to maintain the integrity of the story without losing the elements of drama and entertainment,” says Shama Zaidi.

Atul Tiwari couldn’t have been more accurate, when he said,   “Our founding fathers have almost been forgotten, and their invaluable contribution to the shaping of our destinies is relegated to  footnotes in the history of the nation. This is an attempt to not only remind the masses about these great women and men, but also to show everyone the odds they fought, the suffering they went through in making our nation a democracy, a democracy that has stood the test of time.”

Telecast on Sundays from March 2 at 10 am and 10 pm on Rajya Sabha TV, Samvidhaan: The Making of the Constitution of India is Vice President M. Hamid Ansari’s gift to Indians for generations to come. Like many television historicals, this series too will hopefully over time gain appeal across the country, as plans are to dub it into 14 languages. The music which plays as a prelude, as an interlude  and as the end credits scroll is Shantanu Moitra’s exquisite arrangements of the national anthem and two national songs – Vande Mataram and Sare Jahan Se Achcha.

Samvidhaan: The Making of the Constitution of India is about to change how students and lay people understand and regard the Constitution; not as something dry and dull but vital for us to know and assert our rights.