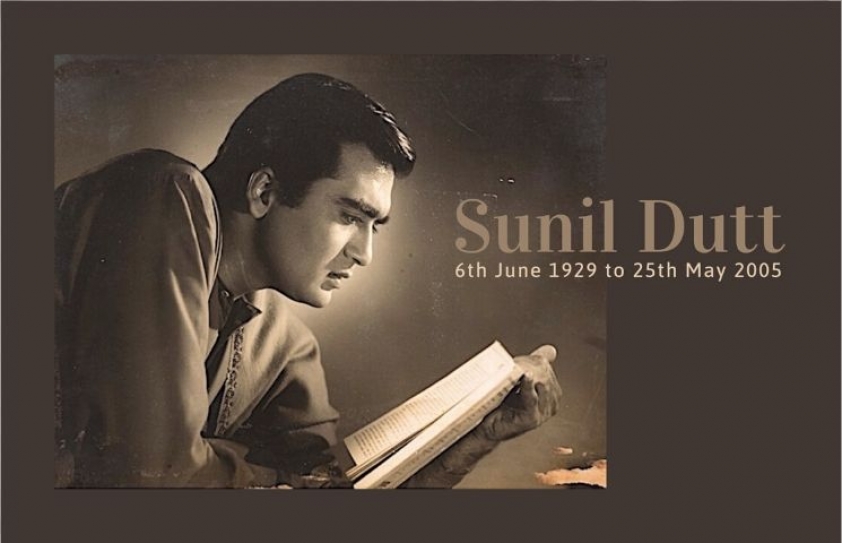 I had  met  Sunil Dutt  more than  once, writes Humra Quraishi in her piece this week, where she recalls one such time when she interviewed him in Delhi.

As far as I can recall I had met Sunil Dutt on  four  different  occasions in New Delhi, after he had joined active politics.

Details of all of those meetings are very much intact in my head; after all, it is difficult to forget  personalities like him because they have a profound impact upon your psyche. My first  meeting  with  him  was in the  mid-1990s.

In fact, let me describe my first meeting with Dutt sahib as I share a  detailed interview, which I did with him. With an appointment in place, I  reached  his  official  bungalow on New  Delhi’s  Safdarjung  Lane. Mind you, I had  managed to   get  an appointment for  this  interview  after  weeks of  calling his office and after I was told repeatedly by his staff that Dutt sahib is too busy on week days and during weekends he goes to Mumbai.

The  drawing  room in his official bungalow, where I was  made to sit, seemed  a  bit plain and  bare. Besides routine furniture, there was nothing much in that room except one wall full of photographs. The wall I’m talking about was decorated with 33 framed photographs: Sunil  Dutt with  Nargis,  with the children and his grandchildren, with three generations of the  Gandhi family, with Mother Teresa, with President Reagan, with Jimmy Carter, with jawans  at the border areas and more.  Then, there  were  many pictures  of  Nargis  receiving various awards and also a photograph in which actor Rekha was visiting the Dutt home in Mumbai. 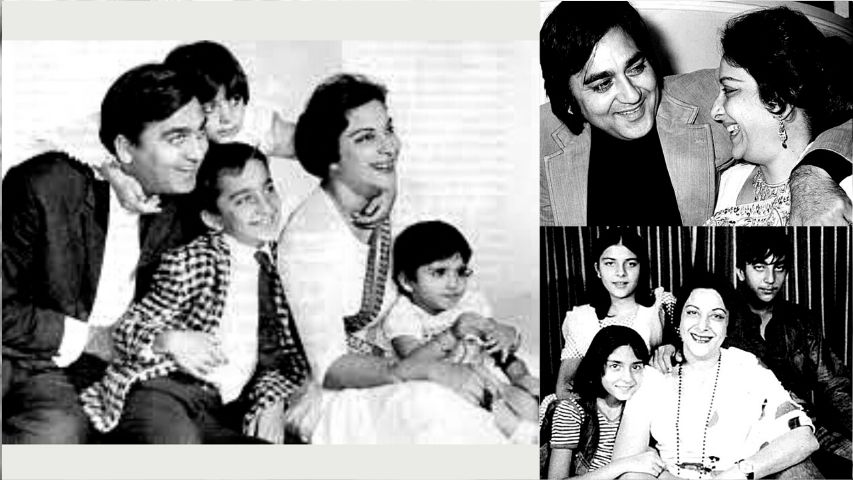 And if you readers are wondering  how on earth I found so much time to sit and count the photographs and to get into such  detailing, I have to  tell you this: Though  the  appointment  for  the interview was fixed  for  11.30am on that day, Dutt sahib hadn’t returned from Parliament therefore I had little  choice  but  to  wait for him. His PA, one Mr Sharma, sat and conversed with me and told me, ‘Dutt sahib has  given us  strict instructions that the office staff here, has to be very kind to cancer patients, drug addicts and to journalists.’

It was after about an hour that Dutt sahib arrived and gave me an explanation for the delay, ‘Parliament  mein tha.’

Then  half way through my interview with him, Raj  Babbar dropped by and  he didn’t sit quietly, rather he tried making himself a part of the interview; coming  up with choicest quips, until of course, enough hints were dropped, which drove him to leave.

And with that I could continue with my interview.

Have you recovered from the trauma of your son, Sanjay’s arrest and  imprisoned for 19 days under TADA? Why do you think TADA charges were slapped against him when your lawyers had specified it  was  a case of  arms offence?

Looking directly at me and without taking a pause he said, “Its  been   extremely shocking  for us and I don’t think we’ll ever be able to recover from  it. This can’t  ever be washed away from our minds. At times I think that, is this what we have got in return for all that we have done for the country? You punish a  person who is yet to be proved guilty and whose family has done whatever was possible for their motherland? What  else do I say!  I  shouldn’t be talking about it at this stage because the case is going on at the Bombay High Court. Also, any comments made by me can be played up by vested interests.”

I’d furthered the interview, asked him to comment on the theory doing the rounds, that Dutt sahib was being harassed for showing  sympathy towards one particular minority community during the Mumbai riots?

Not refuting the theory he added, “Why this  propaganda that I’ve worked only for the Muslims? Earlier when I had undertaken the Padyatra from Mumbai  to  Amritsar, then I suppose it was not for a Muslim cause?  It was only for the Hindus and the Sikhs? Even in the Bombay riots I helped  whoever was suffering and affected. Obviously when they came to me asking for help, I couldn’t have at first asked them their religion and then got down to helping them. I have always and always  helped  anybody in  pain, in need  and anybody who is suffering . Although I have myself been a victim of the Partition and suffered tremendously, my mother taught us never to  hate a human being. I have  been  brought up on this principle and this is the very  principle I have  passed on to my children.”

I then asked  him, if  rioting re-occurs in  Mumbai would  you  once again play an active  role  in relief  and reaching out? And to that he looked more than determined and said, “Of course, I would . Why should I change!”

Shifting focus back on Sanjay, Dutt sahib told me, “My son has  changed  after all this. I think he will  never  be the same again. In these riots he had tried to provide assistance to victims but now he says to me, ‘Papa  I will  never do any social work.’ See how sad it is! I don’t want to comment  too much on the case at this stage but I am of the belief that, if he  has committed  or  made a  mistake,  then law should take its own course. But don’t come up with filthy allegations against us. Such allegations, which are unimaginable, like people calling us Pakistani agents, Desh Drohis?  You cannot imagine how it feels. Those days wherever I would go, even peons at lawyers’ chambers said to my  face – ‘desh  drohi aa raha  hai.’ In fact, once my daughters had  gone out shopping and they told me that the moment they stepped into a shop there was silence and the rest of the shoppers had started to walk out. Can  you imagine even my wife who is no more in this world was dragged into all this!  I could hear people say that his (Sanjay’s) mother was  a Muslim. I told people, that you can stab Sanju and me in the back as  much as you want but at least spare the dead or if you have to talk about Nargis then remember her for the work she did for spastics, for the  blind? Nargis worked for children. There was no religious angle to her work. Look  what all we did  for the country. During the two wars  we  went to  border  areas to meet  jawans  and  those  days,  around  1962, when we were  financially hard up,  I’d  donated  I lakh towards the PM’s relief fund. I am ready to do anything for my country.” 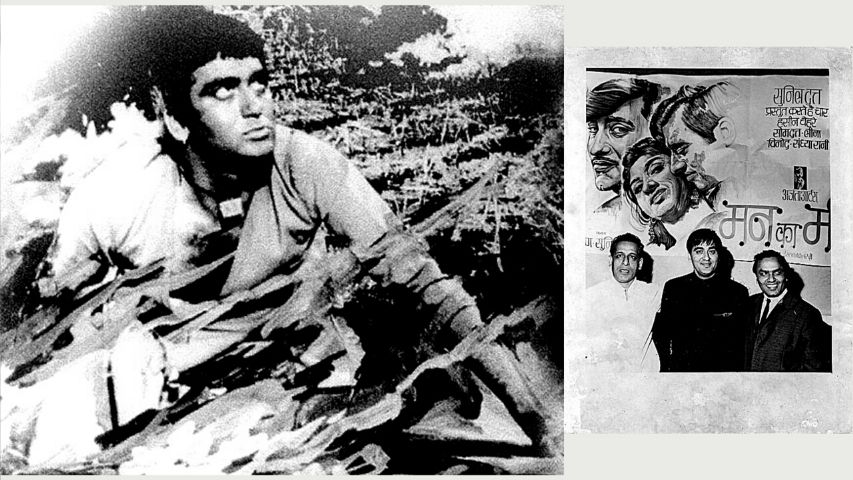 When I asked  him about  how  he’d dealt  with  that phase when  allegations  were heaped  on him,  his  family and son,  he   told me, “Nothing  really. In  fact,  I  have told myself often, that time alone will tell them the truth. Also, where  did  I have the  time to prove our  innocence? During this crisis I would sleep barely two hours every night. I would  get up  by  4am and  be out  by 5am in the morning, to meet lawyers. In fact,  when my home  was being searched by the Police for two days, I wasn’t even there; they’d conducted all those searches in my absence.”

Sunil Dutt sahib had also told me that, after Sanjay was arrested he had  approached and met everybody possible, yet it took nineteen days for  Sanjay to be  released. He said, “Only a  few   friends stood  by  us  during that  crisis - from the Congress it was VC  Shukla, Rajesh Pilot, Pranab  Mukherjee, Arjun Singh and  Jagdish  Tytler.  From BJP it was Shatrughan and Jaswant Singh. From the Janata Party it  was Sharad Yadav. And yes, Chandra Shekharji had also called me. As for the  film industry I had Dilip Kumar,  Rajendra  Kumar, Pran  saab and  also  some  members from the South India Film Chambers by my side.“

He looked pained as he recounted that he did not get any support from  Bollywood,  “There were only  three or  four friends from the film industry, who stood by me. The rest  labelled  Sanju as  guilty even  before the  courts could do so.”

Suppose you were not a MP and not so well connected and also a person who belonged to the minority community, I asked him; then can you visualize  how much tougher it would have been for you and for Sanju?

‘Not really, for  even  in our case people did not spare us the trauma of  coming up with allegations like Sanju’s  mother was a  Muslim. But then,   there are still  strong  secular forces  in  the  country, which are capable of  stopping this decay. In Bombay it was secular forces which saved us from many  disasters.”

Was he  frustrated with the  way  the  political system was functioning  -  more  so  as  he had  even threatened  to resign when Mumbai  riots  were at the peak? “Yes, I was  definitely feeling  very guilty, for even though I was/I  am  an  elected Member, I couldn’t do much in my constituency for my people. I had entered politics to serve people and yet I felt so helpless because of political tamashas taking place. All of it reflects the decay in our society, as politicians don’t come from outside the social construct. They are  part of the same society.”

And when I asked him about his friends in political circles, he was rather diplomatic. “I have  no enemies. I am friends with everybody. Also, I believe that nobody is  your enemy except your destiny. Yes, destiny has  been  rather  tough  on  me, thapere  khain  hain  zamanai  ke. But I suppose  one  has to  fight, to go on with life. Right from my childhood it has been a struggle but what has happened to my son, I  couldn’t ever think of. These  are tests of life.”

I ended the interview with asking him this vital question: Any possible solution for the ongoing communal  cum civil  strife? “Yes, there can  be a solution,” he said. “Only  last  night I was going through the latest Time  magazine and horrific images of war ridden Somalia shocked me so much that I couldn’t eat dinner. Those pictures of human beings dying, sitting injured and sick, crawling, rendered so frail and weak, that they cannot walk. These human disasters have happened because of the ongoing civil strife in Somalia. And now I am going to suggest that these images be  displayed all over our towns and cities, at public places and be given this caption - See  what internal  war  or  strife or unrest  can do  to you, to your country, to your fellow countrymen.”