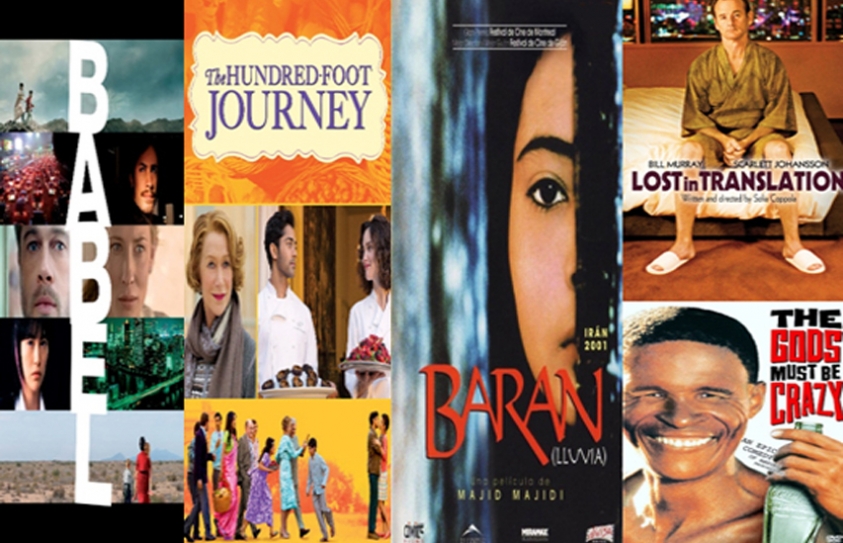 We live in a world spanning myriad landscapes that host a multitude of cultures within their boundaries. It is these borders that define and divide us. And it is often in the time of crises or when we recognise our essential humanity that we transcend these differences. Listed below are films that either touch upon this concept or place a character in the midst of unfamiliar environs which s/he navigates to fascinating effect.

God, in his displeasure, had the people scatter in different parts of the world, taking away their common language so that they could not understand each other. That is the case with Babel, the film. It is not so the perceived evil in a culture but the misconceptions and the resulting misunderstandingsthat ripples through the premise. All it takes is a near-fatal rifle shot from an unthinking child in Morocco to set in motion the plot’s dynamo effect.

This sets in motion an understated bond of understanding and protectiveness between the two. Baran also highlights the plight of the Afghani immigrants who are compelled to flee the oppressive regime of their home country to Iran in the hope that their prospects would improve. This makes their need for betterment no different than Amelia (Adriana Barraza), the undocumented Mexican worker in Babel, who is trying to improve her lot in life.

Xi’s mission to drop the bottle off the edge of the world converges with a socially awkward microbiologist, an attractive schoolteacher and a jeepful of unwashed terrorists. It’s uproarious, slapstick and a must-watch if you haven’t already seen it.

They walk through the sights and sounds of the city, resigned to their respective marriages but a little less forlorn around each other. Expect the regular romance tropes to be subverted in favour of a relationship that seems more real and less contrived. A lot is left unsaid, but when it is said by Bob to Charlotte in the end, it is lost to the audience.

The jolly romp of a story also depicts in places racial bias against the Kadams, who are striving to carve their own culinary niche within the stuffy circle of French elites. But it all has a happy ending, celebrating the zest for life and good food,which can help overcome the worst of times.

This list is by no means exhaustive and the top five films mentioned here are only the preferences of the columnist. These films beautifully represent the diversity of cultures without vilifying “the others” into an unsavoury mould. And it is this objectivity that brings out the sublime charm of each culture.