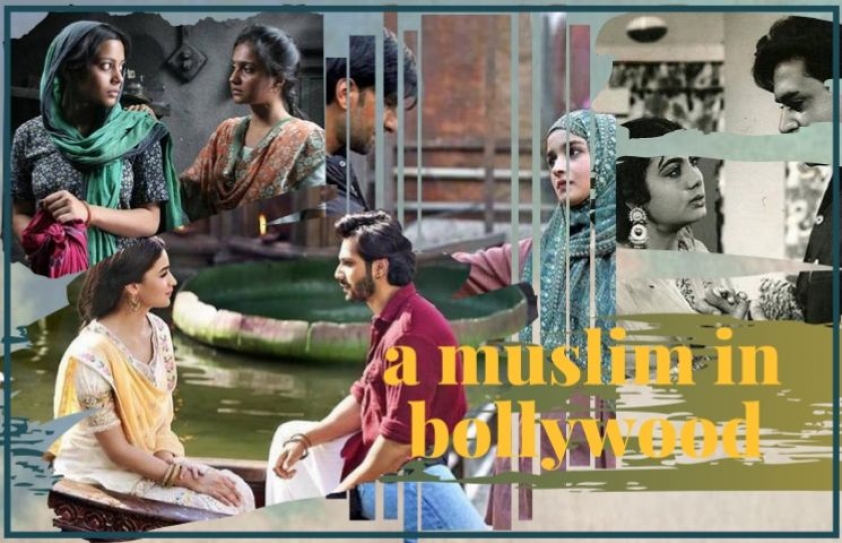 A Muslim in Bollywood

Take Zafar, one of the lead characters in the film, he writes. He loathes his biological father and the life of comfort and honour that his legitimate son, a Hindu, enjoys. Zafar doesn’t shy away from inciting communal violence to torment the respectable man responsible for his birth. With a courtesan or a tawaif as a mother for the child born out of wedlock, he underlines the New Muslim in Hindi cinema.

Over the decades, this template of the stereotypical or atypical Muslim has seen many turns. The changes, unsurprisingly, reflect the ideological and political shifts in the country’s modern history. From the endearing Afghan strongman in Zanjeer (1973) to the NRI trying to tell the world that he is not a terrorist in My Name is Khan (2010), the image of the Khans — one of the most oft-used surnames for onscreen Muslim characters — has also mirrored the effects of some of the major events in world history.

The Khan, script permitting, can also be the spy who is committed to upholding national security (Baby, 2015). He can be the coach to a criminally undervalued women’s hockey team that goes on to win a world championship (Chak De! India, 2007). In guiding the underdogs to a spectacular victory, the coach also sheds the tag of traitor he’d earned as a national player when he conceded a goal to Pakistan during a do-or-die match.

When Majid spoke to Nandita Das, actor and film-maker, she said, “Mainstream cinema shows different portrayals of Muslims, based on popular perceptions of the community. Over the years, Islamophobia and the marginalisation of Muslims have impacted producers’ and directors’ choices in excluding and representing Muslim characters.

“The first is the post-Independence Nehruvian age, where films inculcated socialist values in the national ethos, and sought to dismantle oppressive feudal structures and bind an extremely diverse country. Then came the Indira Gandhi phase, in which films such as Dastak (1970) and Garam Hawa (1973) presented the trials and tribulations of Indian Muslims in post-Partition India,” he says.

The third phase, he adds, looks at the milieu represented by the 1991 economic liberalisation and the 1992-93 movement for a Ram Mandir in Ayodhya — “phenomena that were more or less parallel events”.

For a generation of cine-goers, a Muslim in a Hindi film was the affable, benevolent and secular chacha (uncle). One such character that hasn’t faded from public memory is the chacha from Dhool ka Phool (1959) — the man who sang to the infant in his arms: “Tu Hindu banega na Mussalman banega, insaan ki aulad hain insaan banega (You won’t grow up to be either a Hindu or a Muslim, you will grow up to be a human being).” 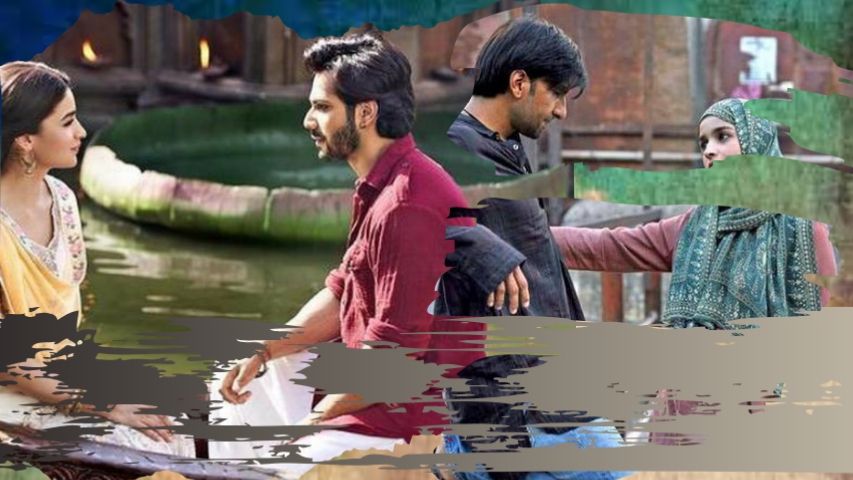 With the advent of Nehruvian land reform, classics such as Chaudhvin Ka Chand (1960) and Mere Mehboob (1963) symbolised the hangover of a disappearing lifestyle that accompanied the Muslim aristocracy’s descent into obscurity. The highly entertaining, glossed-up qawwals who serenaded parda-nasheens (veiled women) didn’t really spark introspection even as Amar Akbar Anthony (1977) projected India’s secularism.

And then came Roja, a Tamil film — dubbed in Hindi and released all over India in 1992 says Daanish Majid in his article. Till then, the exotic and hospitable Kashmiri hadn’t exchanged the shikara oar for an AK-47. But the Pankaj Kapur-starrer introduced viewers to the Muslim as a separatist. Next in line were communal riots and serial bomb blasts, ripple effects of the Babri Masjid demolition. And unholy interventions (in matters of communal unrest and jihad) from forces across borders.

Of course, parallel cinema had its own script. Before the onset of the phase that focused on jihad and terror plots, Salim Langde Pe Mat Ro (1989) — directed by Saeed Akhtar Mirza — raised pertinent questions on the socio-economic conditions of Muslims. Although it encompassed the reality of how education and opportunity were scarce within the community, it did so by going beyond amplified stereotypes.

Majid further adds that, the 1993 Bombay bomb blasts — masterminded by the city’s top criminals — gave Bollywood a new crop of underworld bhais and bombers. But this genre came hand-in-hand with a category of feel-good cinema, largely spearheaded by producer-director Karan Johar. Two years before the blasts, India had begun a more rapid transition into an economy that paved the way for new money and further Westernisation. The most popular cinematic symbols of this growing and aspirational middle-class were Johar’s glamorous Poojas and Rahuls. While their families flourished on celluloid, Bollywood continued to lengthen Rahim’s beard and conferred on him the mantle of the bhai or the jihadi. If not downtrodden, the most prominent indicators of his prosperity would be rose-tinted sunglasses and a criminal empire that spanned from Mumbai to Dubai.

“The relative distance between Muslims and their country’s path to economic superstardom was also pondered upon,” Siddiqui adds.

The Shah Bano case — a landmark judgement about a woman’s right to alimony — turned the spotlight on the plight of Muslim women, he points out. “Saeed Mirza’s Naseem (1995) and Khalid Mohammed’s Fiza (2000) created memorable heroines, which indicated some soul-searching was taking place.”

Naseem shows a broad-minded family that educates its daughter in an era of simultaneous economic changes and religious polarisation. The titular character Naseem’s mother isn’t afraid to equate the patriarchal conditions of Hindu women with Muslim women by acknowledging the excesses of the burqa and triple talaq.

However, Majid writes in his article, such portrayals remain mostly confined to non-mainstream cinema. Fiza and, before that, Nikaah, a 1982 film that focused on the sharia laws of divorce, are among the rare commercial Muslim socials.

The Muslim — the good one — has to redeem his or her reputation with periodic acts of patriotism. Bollywood gave them a chance to do so with films such as Sarfarosh (1999) and Raazi (2018).

Inspector Salim of Sarfarosh is willing to lay down his life in his fight against terrorism, if only his seniors were to trust him. In Raazi, a young spy marries into a Pakistani family in order to help Indian intelligence during the 1971 war. John Abraham’s Agent Rehmatullah — in Romeo Akbar Walter, released earlier this year — enjoys only Jackie Shroff’s trust in the establishment: “Romeo ek Mussalman ya Hindu nahin, mere liye bus Hindustani hain (Romeo isn’t a Hindu or a Muslim; he is just an Indian to me).”

The odd film has, however, questioned the State on its attitude and treatment of the Indian Muslim. A good example of this is Shahid (2013), a biopic about a lawyer who defended those who were wrongly accused of terrorism. In Baby, Feroz Ali Khan (played by Danny Denzongpa), the head of a special task force, observes that a terrorist organisation’s biggest success is that many Muslims feel that “they don’t belong here”.

Although outside the mainstream Bollywood purview, Mrinal Sen’s last film, Aamar Bhuvan (2002), focused on the life of a Muslim family in rural Bengal. Das recalls her experience of working in it:

“Fifteen days before the shoot, Mrinal-da called to say that funding had stopped because the investors didn’t want to put money into a film about a ‘Muslim’ family,” she says.

It was the year of the post-Godhra violence in Gujarat, and “the communal bias was palpable”, says Das writes Majid. She reasoned with the director to not shelve the film and he went ahead with the shooting with the little funds he had. Das’s own film Firaaq (2008) was born out of the polarised notions of identity in the light of the Gujarat riots.

“Today, having Muslim characters in a film is almost a statement,” she adds, “but it is refreshing to see a film like Gully Boy (2019), which has a Muslim context but doesn’t make a big deal about it.

The popular, onscreen image of the Indian Muslim usually entails a ghettoised existence or the ability to mouth Urdu verses. The Muslim poet or shayar has been caricatured to a point where he speaks only in couplets. Ranveer Singh’s electrifying performance that brought Murad “Gully Boy” Ahmed’s to life in Zoya Akhtar’s recent film somewhat amalgamates these binaries. Despite coming from a household with an abusive, polygamous father, Murad is the rare filmi exception to the oft-projected norm of the violent, patriarchal Miyan-Bhai.

Either way, the Muslim on celluloid adds heft to the diverse ethno-linguistic and religious mosaic that is central to India. That, too, since the theatre is now also more of a battlefield for heavily contested ideas of India.