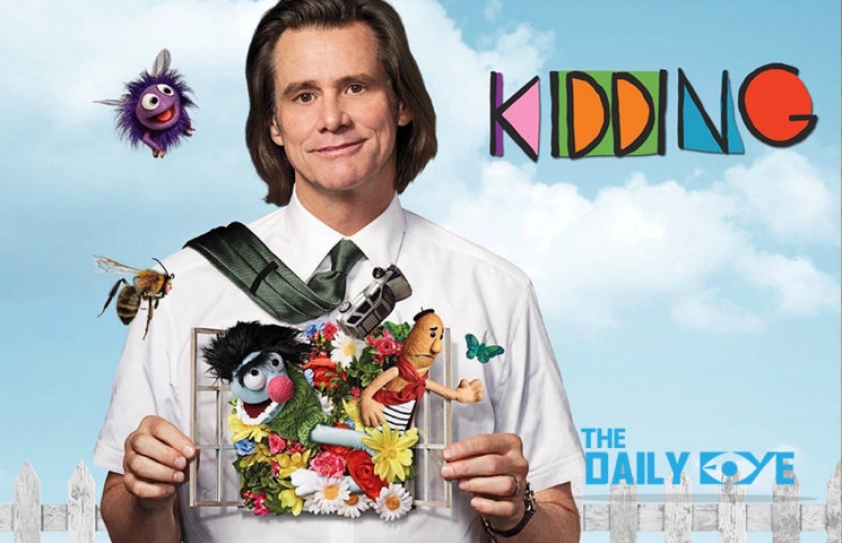 The last time Jim Carrey and Michel Gondry collaborated, they produced some of the best work of their respective careers. ‘Eternal Sunshine of the Spotless Mind’ gave Carrey a chance to deepen his performance beyond his usual caricature, while Gondry found space for sharp moments of humour within his gauzy dreamscapes. So the prospect of these two coming back together after almost 15 years apart was an exciting one.

The result is ‘Kidding’, Showtime’s new drama slash comedy from Weeds producer Dave Holstein, about a kid’s show host trying to stay positive through a fog of grief no less. It tries to capture the kind of strange and bruising tone that made Eternal Sunshine so good; sometimes, it even succeeds. But more often than not, ‘Kidding’ feels caught between too many tones and ideas to become quite as distinctive as it could be. The series vacillates between uplifting anecdotes about the endless possibilities of kindness and deeply depressing shots of existential bleakness — sometimes on purpose; sometimes, not so much notes Variety.

In a 1-on-1 interview with Collider, the Oscar-winning French filmmaker talked about what drew him to ‘Kidding’, his desire to team up again with Jim Carrey, the evolution of their working relationship, how he approached directing the rest of the cast, the biggest challenges in directing this show, and whether he’d return, if there’s a second season.

When asked how he landed this series, Michel replied, "It came through my agent. They told me there was this TV show with Jim attached, and I read the first two episodes. The concept of the host of the kid’s show has this wise image on TV, but his personal life is collapsing was really exciting."

He was also excited to work with Jim Carrey again. "Yes", he says, "after Eternal Sunshine, we both were trying to find some material that could reunite us. That happened to be this. He gave me 100% trust, on my way to direct him. That was easy and strong, at the same time. When he would go off to do Jim Carrey, I could see right away that he was losing his character and I could tell him to come back without having any problem of ego. When an actor doesn’t trust the director, they get insecure and upset. I’m not saying he doesn’t have insecurities. He probably does. But at least with me, it was so much easier than Eternal Sunshine because he trusted me."

"If this series continues, have you thought about whether you’d want to direct Season 2?" asked the interviewer at Collider. To which Michel replied, "Yes, I’ve thought about it. I’d like to do another movie, so I don’t know. There are so many parameters. It’s long and it’s hard work, but there’s a very strong comradery."

Watch ‘Kidding’ to immerse yourself in Carrey’s world. He is worth the price of admission, though, even if it’s not the TV comeback vehicle many of his fans would want. Heck, he’d probably be a huge hit just hosting a full-length version of the show within the show, rather than this version that only gives us innocent glimpses amidst all the mourning. But like Jeff Pickles, Carrey wants to lean into the harder parts of life.

More often than not with ‘Kidding’, he succeeds.