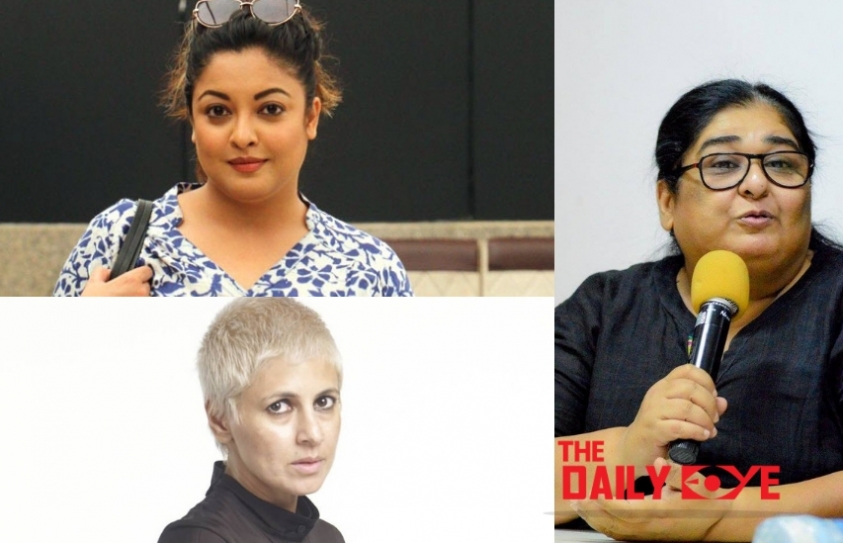 The MeToo wave sweeping social media today, triggered by Tanushree Dutta’s allegations of molestation against Nana Patekar in September, is a 2.0 redux of Raya Sarkar’s list that took the internet by storm last year.

The big difference between the two is that the women coming out this time around are not anonymous. Moreover, these are well-known names, both the perpetrators as well as (in some instances) the victims, as is only to be expected in the film, television and journalism industry.

A Tanushree Dutta against a Nana Patekar, a Vinta Nanda against an Alok Nath, a Sapna Bhavnani against an Amitabh Bachchan, and well known faces in journalism against equally well known and more powerful editors. It should be remembered that it was not Raya Sarkar who started it all.

It neither began with Alyssa Milano, nor as a response to the dozens of women who spoke out about the sexual misconduct of disgraced Hollywood producer Harvey Weinstein in 2017. It began in 2006, with a 45-year-old African American civil rights activist, Tarana Burke, 10 years after she had a conversation with a 13-year-old sexual abuse survivor. “I didn’t have a response,” Burke had said, “And in that moment I couldn’t even say, ‘me too.’”

Burke said, “What the viral campaign did is, it creates hope. It creates inspiration… People need hope and inspiration desperately. But hope and inspiration are only sustained by work.” One of the things about the MeToo movement Burke is concerned about is whether those who helped to inspire women to disclose their stories of survival are prepared for what comes next.

By now, with fresh heads rolling in the tumbrils every day, and awestruck shocked reactions of people becoming common, as they find close colleagues and acquaintances falling under the knife, (an almost random and capricious knife that might find a prey just about anywhere) the entire trend presents the appearance of a random blood sport. A man sympathising or expressing outrage might just find himself next to be “metood” and end up on the side of the villains. 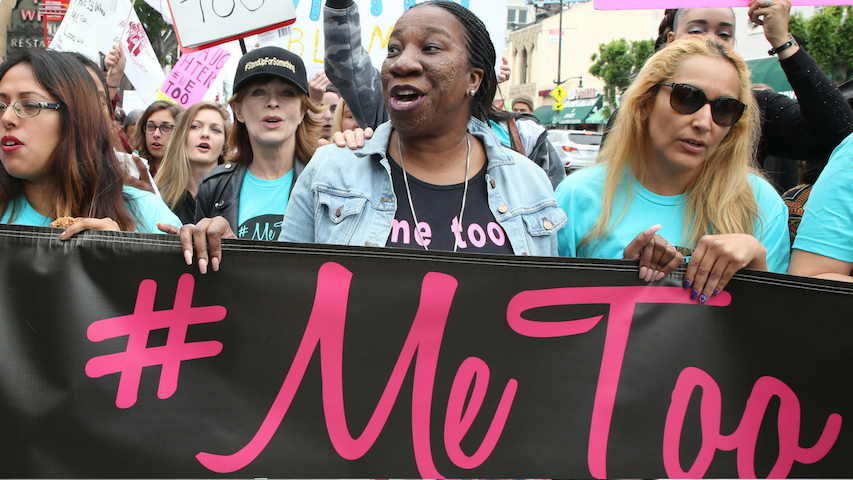 With each net revelation, the internet is full of howls of fury, vengeful glee, and morally upright righteous wrath. It is also full of speculation, rumour, and bitter arguments between those taking absolutist stances and those who would want to be a little nuanced and cautious in their approach.

This is not to dilute the importance or take away an iota of importance from this movement.

Not a single sensible man can oppose the movement. At some point or the other all of us men have presumed or encroached on a woman's space. Either knowingly or unknowingly, it would seem from the daily outpourings on Twitter and Facebook that most men have been carried away, sometimes under the influence, or sometimes through a projection of desire that ignored conveniently the other person's agency or comfort levels. Memory serves as a sieve that conveniently leaves out details. A smile is seen as a come hither invitation. A glance is interpreted as consent.

Male ego is a steamroller, a behemoth sans eyes, or ears that look for the slightest excuse to trundle onwards at full speed.

Some of the concerns of groups that try to bring varying degrees of nuance and distinction in this raging discourse range around the degree of imposition and how that makes all the difference. The graver offences of molestation, brutality, and rape are obvious. There is no grey area there. One would want unmerciful fingers of justice to reach back into the past and mete out rigorous punishment, but what of the incidents fraught with uncertainty and doubt? One can appeal to context all one wants and attempt to lighten the gravity of "minor" misdemeanours, but the heart of the person who has been hurt knows whether that wink or touch was innocent or not.

Because of the extreme positions that are being voiced, it is difficult to curate all these viewpoints because of kneejerk reactions. Is an accusation enough to indict someone without any kind of circumstantial evidence whatsoever? 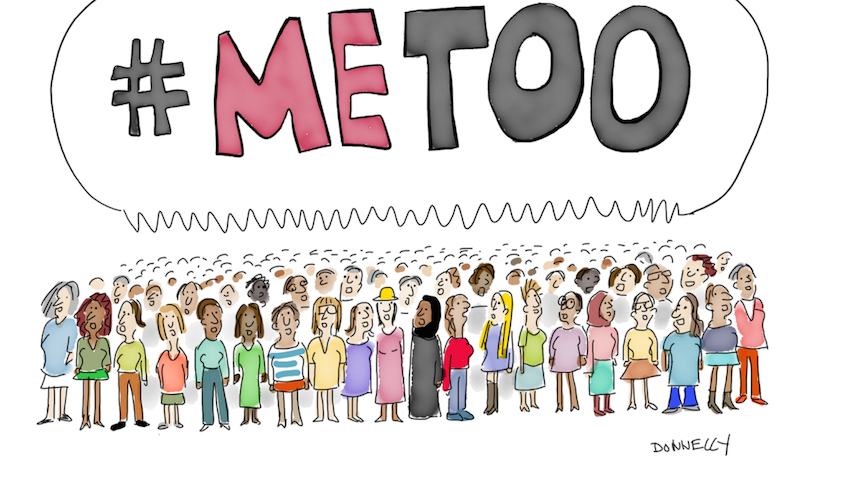 Men have run this place for far too long. (Source - Drink Ocean)

One thing that is however clear is that this is not just about legalities which many have been focusing on at great length. This is about the awakening of realisation in even those of us who consider ourselves morally without blemish, and who may have erred.

Undoubtedly, it is practically impossible to provide any kind of ‘evidence’ of suggestive speech, touch, or molestation since there is no constant CCD camera hovering like a nanny at all times in every given situation. One is innocent until proven guilty and that is how our system works. It is not possible to deliver judgement on the basis of speculation or someone’s word alone.

Therefore the #MeToo movement is less about legal redressal than it is about public awareness and perhaps equally importantly, a cathartic closure for the victims.

Another point raised by the detractors of this wave is the delay, sometimes in terms of decades that it has taken the victims to come out against their tormentors. This delay is seen as a dent in their credibility. A benefit of the doubt for the accused and perhaps even a reprieve. What we should realise is that sexual molestation in all its shades is an exercise of power and dominance over someone weaker, usually in a hierarchical structure, and whose career and future are in the hands of the perpetrator. Whether it is an intern in a company, a cub reporter, or a struggling actor, the system ensures that forced compromises find easy passage and everybody looks away. There is a closure of the ranks against the victim because of the conspiracy of silence, an omerta as it were, and for years, the victim has to bury the experience (sometimes repeated) deep in the recesses of memory. That is, she reaches a level of power and agency herself where she can afford to talk about it. All the journalists speaking up against MJ Akbar today have attained seniority and positions of power themselves. Enough to take the step that they have. 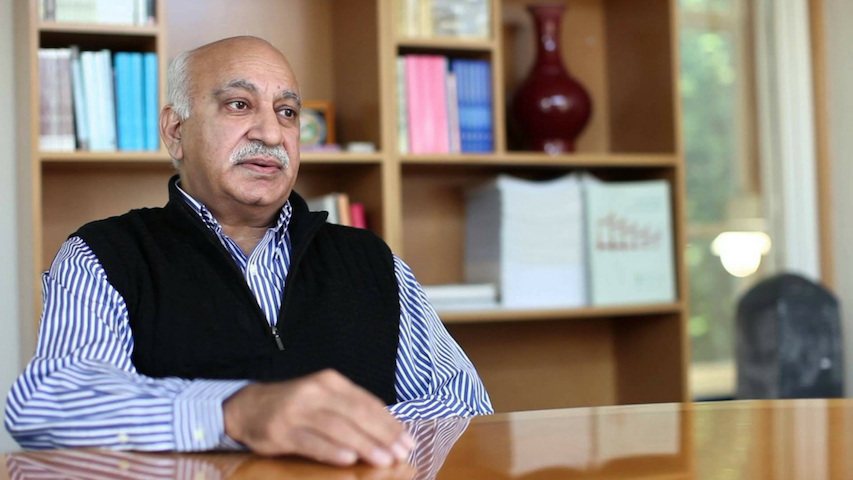 MJ Akbar has stoutly denied the charges against him. (Source - YouTube)

At the moment of writing this, MJ Akbar has refused to step down a MoS External Affairs, and stoutly denied the charges against him. He is also moving court against his accuser to clear his name. The point is that there are multiple accusers where he is concerned and the general public impression about him is not good. Practically speaking, there really is no other option for a powerful public figure except to deny and take legal action against the accuser. Admitting or apologising will straightaway mean an ignominious end to one’s career. What happens with all the others who have been “outed” is a matter of conjecture.

Perhaps, we shall be seeing a plethora of court cases very soon against the brave women who have taken this step, most probably the powerful will win, very likely justice shall never be served, for justice and law are two completely different entities — and indeed many women will be reviled as cheap publicity hounds and sensationalists in the backlash that has already begun.

But a beginning has been made. There will be greater awareness in the society at large, less complacency among those in power, more fight back on the part of the fragile and vulnerable, and, one hopes, support groups across the social ecosystem in our country cutting across classes.

There is too much suffering in this world. Men have run this place for far too long. And this is what it has come to.

If nothing else, this is the time to make amends and to introspect. It is time to just lend an ear and let the women do the talking.

(As first published in DailyO - https://www.dailyo.in/variety/metoo-movement-metoo-india-sexual-harassment-raya-sarkar-tanushree-dutta/story/1/27247.html)