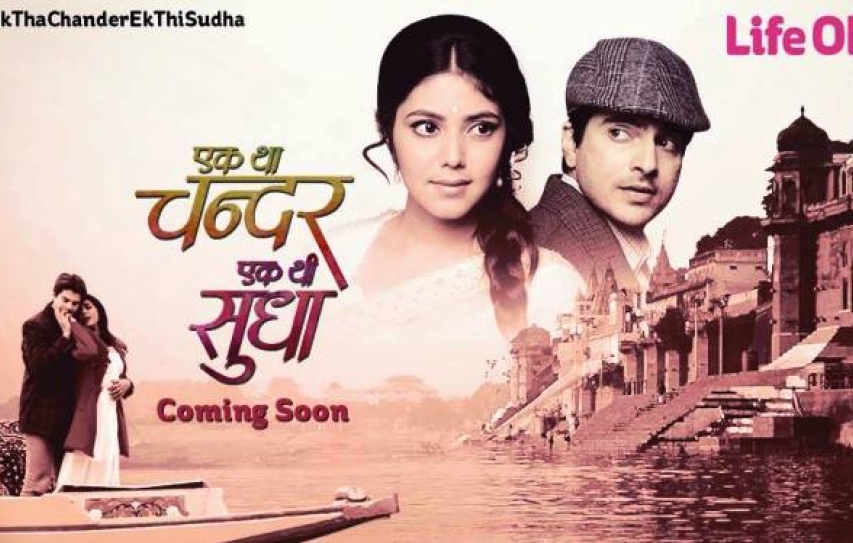 Monday evening saw the start of Life OK?s newest serial -- Ek Tha Chander Ek Thi Sudha, a page out of the best of Hindi literature -- Dharamvir Bharati?s iconic novel, Gunahon Ka Devta. Although placed at 7 pm, it is an ideal slot for an older age group, when elders wait for their family members to start getting home; they do so watching a leisurely paced, love story set in the 1960s, where books and men of letters were coveted as friends. The refrigerator was still a single door with the icebox inside the fridge with ice trays, and not filled with ice cream buckets. The first episode had a refreshing beginning, setting the pace for the rest of the serial. A young woman puts her ears to the track to hear the train approaching. Like so much else in the nascent series, there is a freshness of setting -- Allahabad. The young, fervent and mischievous Sudha is ardently in love with Chander, who is a prot?g? of her father. The bond that Chander and Sudha share is that of two good-humoured, inseparable friends. Rahil Azzam plays Chander and Umang Jain is Sudha, while Rajendra Gupta is her father. This is the first adaptation of Dharamvir Bharati?s writings for television. That it has been given a reverential treatment and authentic recreation is obvious from the start; it also confirms the buzz that the series? director Ashwini Dheer has paid his tribute to a book that touched him years ago. One cannot help but notice the recreation of the 60s, vis-a-vis authenticity in fashion, eye makeup, even the heeled sandals, etc. The production design has taken care to even replicate the interiors right down to the floor fans. The ambience evokes nostalgia for those who have lived in that period. Though it is a mini-series, Ek Tha Chander Ek Thi Sudha has the look and feel of a film. Rahil Azam is such a fine actor that he?s bound to dazzle with his performance. The director has confined it to 20 episodes; if it was an infinite show, as they had planed earlier, that would have meant veering away from the classic. So 20 episodes it is. Television in the 21st century hasn?t really looked the way of the wealth of literature, not just Indian. In the late 1980s to early 1990s DD telecast shows like Kathasagar, Darpan and Ek Kahaani which delved into world literature. The series had a different story in each episode and most of the stories were one-episode long. By taking up Dharamvir Bharati?s seminal novel Gunahon Ka Devta out to television viewers, Life OK might just usher a new trend ? revisiting Indian literary classics for television. In the meanwhile, Star Plus? Sumit Sambhal Lega is the official adaptation of the roof -raising American sitcom Everybody Loves Raymond. The channel acquired the rights to the official adaptation of the sitcom. Steve Skrovan, who was a writer on the original series, was part of the team which worked on the Indian remake. The show revolves around Sumit, a radio journalist who lives with his parents played by sitcom stalwarts Bharati Achrekar and Satish Kaushik, and the team of directors is headed by Deven Bhojani who stands tall among actors and directors of comedy. Placed at 10 pm, Sumit Sambhal Lega is a break from Prime Time?s usual fare, when the Walias will give conventional family soaps competition with their escapades evoking tears -- of laughter. Adaptation is a healthy way of putting across a borrowed concept. Plagiarism is not, also plagiarism tends to not just dilute the original, but destroys the essence. Two years ago, Anil Kapoor broke the content ice with the West by adapting 24 for desi audiences. New creative techniques and action sequences which came along with the adaptation gave TV production in India a new spin, especially with regards to the thriller genre, in some way we saw it in Yudh. Sumit Sambhal Lega is taking situational comedy the distance and will give the viewers a taste of fun and finesse as they laugh their guts out. Saturday October 3 will see Quantico, a US thriller series make its appearance with Priyanka Chopra as a protagonist. Some more changes on the small screen are happening. Viewers, please sit up and take note.