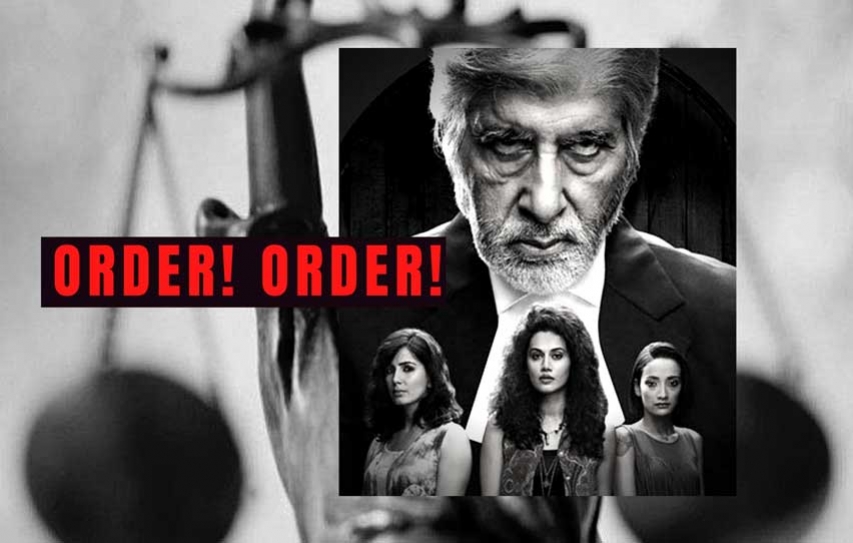 This genre of courtroom dramas - with the judge infallibly asking for “Order! Order!” during an unruly trial - has retained an abiding appeal. Take Anubhav Sinha’s Mulk (2018). A Muslim family accused of links with terrorists eventually lands up in court. All the arguments and counter-arguments thereafter, reflect the state of jurisprudence today.

Indeed, over the decades in popular Hindi cinema, a variety of subjects like rape, murder, suicide, eve teasing, joint family disputes and divorce have yielded subjects of social concern.

And, real life incidents have driven films like No One Killed Jessica (2011), Talvar (2017), Shahid (2012), Aligarh (2015), and there was Section 375 (2019), which was dealing with the subject of rape. Over time courtroom dramas have become more authentic and have criticized loopholes in the system that provides social justice in India.

From a vast stock, this Sunday I have attempted to select 12 films which not only merit repeat viewing but also indicate an evolution of this genre, which contains the in-built message; that justice may be delayed but never denied. 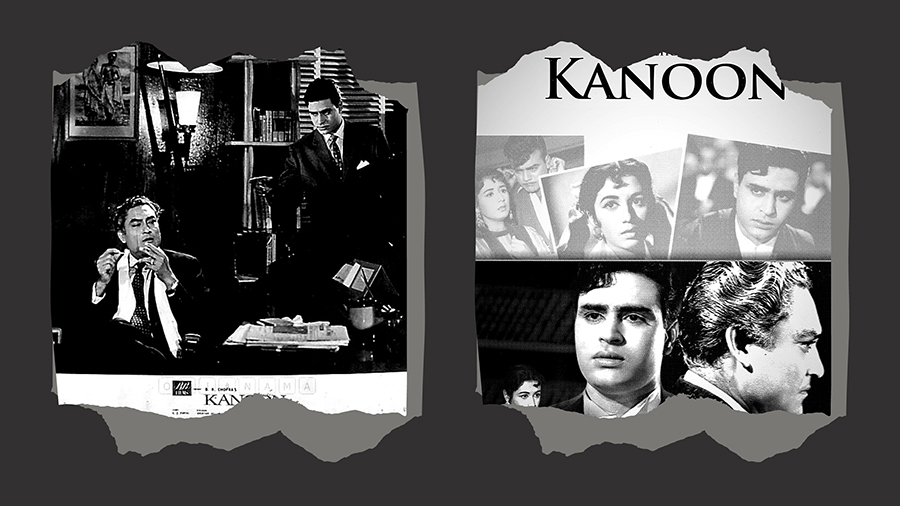 Directed by B.R. Chopra, this was a song-less endeavor shot in black and white. Although the movie baron was pressurized by distributors to add some songs, only a stylized ballet performance was included. The outcome was a whopper success.

The screenplay looked at a judge’s prospective son-in-law, who is the defense lawyer in a murder case. He suspects his future father-in-law Judge Badri Prasad of having committed the crime. Ensues an emotional battle in which the defense lawyer is torn between his respect for his fiancée and her father and his sense of duty. As the judge, Ashok Kumar ‘Dadamoni’ was outstanding and Rajendra Kumar inarguably delivered his career-best performance.

The supporting cast comprised Nanda, Shashikala, Jagdeep, Om Prakash and Nana Palsikar. Incidentally, the complicated role had given Jubilee Kumar cold feet during the shooting and he almost decided to quit. B.R. Chopra panicked and requested Dadamoni to intervene, motivate and comfort his co-actor. 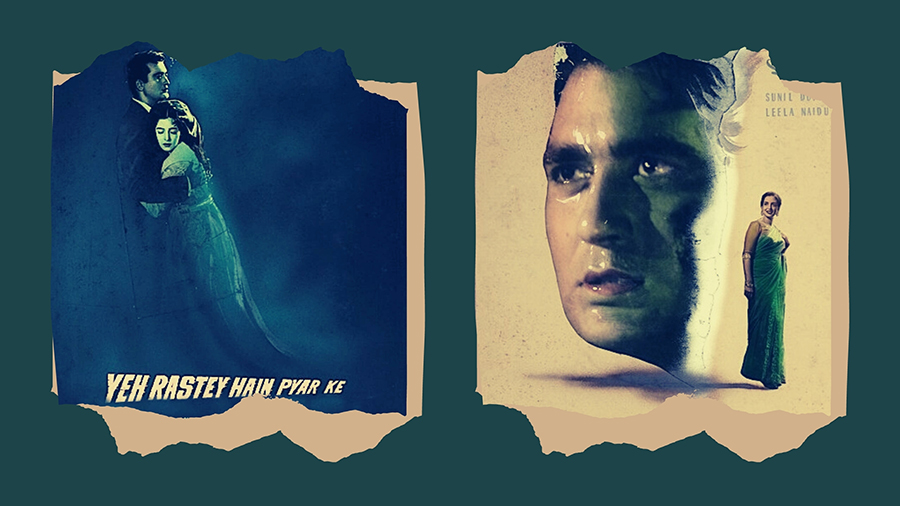 Sunil Dutt’s first film as an independent producer under the banner of Ajanta Arts revolved around the sensational Nanavati case of 1959, which was India’s last trial by jury. Naval Commander Kawas Nanavati was accused for the murder of his duplicitous friend Prem Ahuja and finally pardoned by the President of India. Director R.K. Nayyar quit halfway because of creative differences with Sunil Dutt who then took over the reins.

Starring himself with Leela Naidu, Ashok Kumar, Rehman, Motilal, Rajendranath and Shashikala, the luminously-shot black and white drama dealt with adultery and was saddled with an ‘Adults Only’ certificate. It performed just about averagely at the ticket windows perhaps because it was way ahead of its time.  By contrast, the Akshay Kumar starrer Rustom (2016), made on the same subject was a winner at the box office. 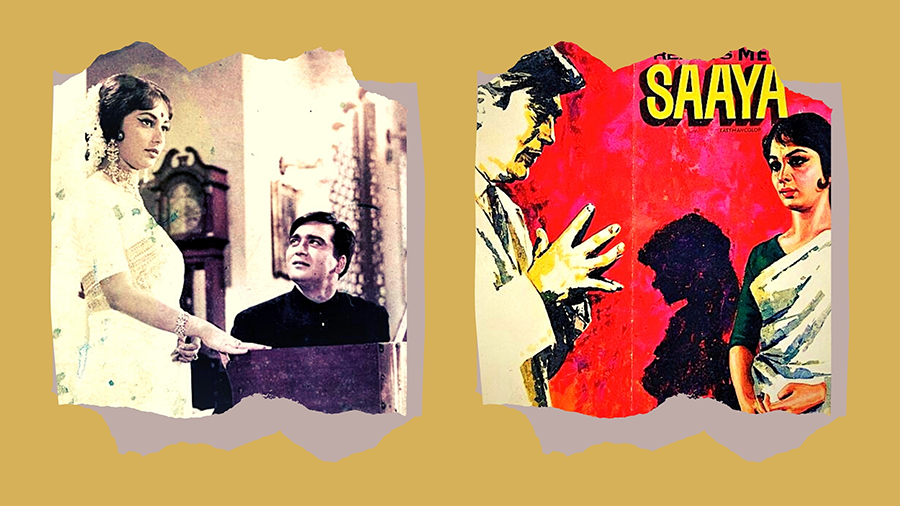 Raj Khosla’s suspense-charged effort was a remake of Marathi cinema’s Pathlaag (meaning chase), with quite a few alterations in the script to suit the Hindi version. Featuring Sunil Dutt, Sadhana, K.N.Singh, Prem Chopra, Manmohan, Dhumal and Anwar Hussain, here was a super-hit, which consolidated Sadhana’s image of a mystery lady.

As for the storyline, it dealt with a young lawyer who returns from London where he had gone for higher studies. On reaching India, his wife passes away in his arms. He clings to her cold body in despair and memories of the past flash before his damp eyes.

Twist in the plot now: a young woman who has been arrested along with a gang of dacoits, claims to be the deceased wife. One of the most absorbing courtroom dramas ever, the original choice for the ‘ghost wife’ was not Sadhana but Nutan - who quit because of differences with Raj Khosla. However, they did work together later for Main Tulsi Tere Aangan Ki (1978). 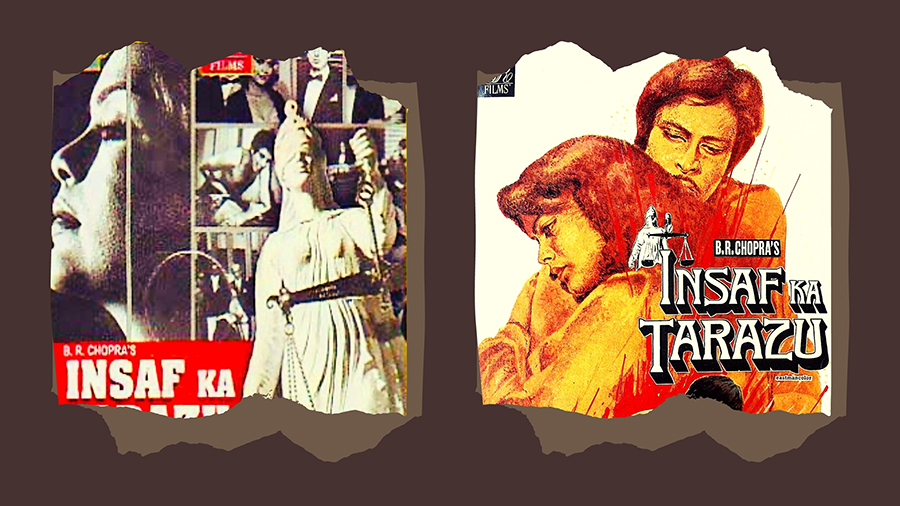 Inspired by Hollywood’s Lipstick, B.R. Chopra adapted the script considerably to suit Indian pallet and selected Zeenat Aman, one of the top actresses of that era, to play the lead along with debutants Deepak Parashar and Raj Babbar,  with Padmini Kolhapure, Simi Garewal and Dr. Shreeram Lagoo.

The focus was on Bharti Saksena, a top model who is brutally raped by her admirer, an industrialist. With the support of her fiancé she drags him to court but loses the case as she is judged by her lifestyle, outlook, and prejudices held against the modeling profession.

To escape the scandal, Bharti moves to Pune with her younger sister Neeta but is enraged and takes law into her own hands when her sister is also raped by the same monster industrialist. She shoots him dead. In court, she questions the judicial system and calls it blind. The film did spark a controversy but the audience queued up by droves. According to me, this is one of Zeenat Aman’s most impressive, no-holds-barred performances. 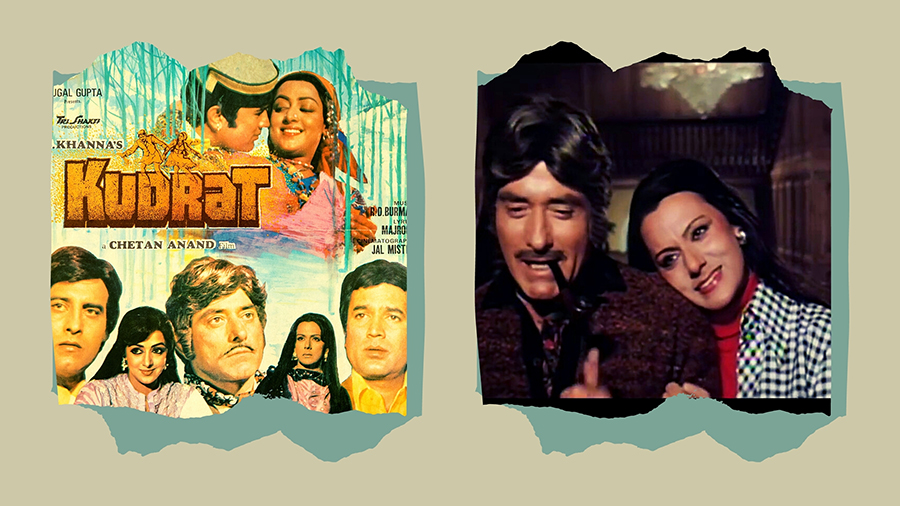 The second half of the story dealt with a court trial. A highly respected citizen of Shimla Chaudhary Janak Singh, is accused of killing his maid servant Paro who is re-born as Chandramukhi and has these recurring hallucinations of her past life which are articulated by her through hypnosis. The defense and the prosecution lawyers have a personal stake in the case. The confrontations scenes between Rajesh Khanna and Priya Rajvansh are relentlessly gripping.

Enhanced by a sensitive music score by R.D. Burman (particularly, the song Humen Tumse Pyar Kitna rendered in separate versions by Kishore Kumar and Parveen Sultana).  A popular song Dukh Sukh Ki Har Ek Maala play-backed by Mohammed Rafi was used in the film but the LPs and audiocassettes carried the song in the voice of Chandrashekhar Gadgil. Incidentally, Raaj Kumar and Priya Rajvansh who formed a romantic pair in Heer Ranjah and Hindustan ki Kasam played  father-and-daughter here. 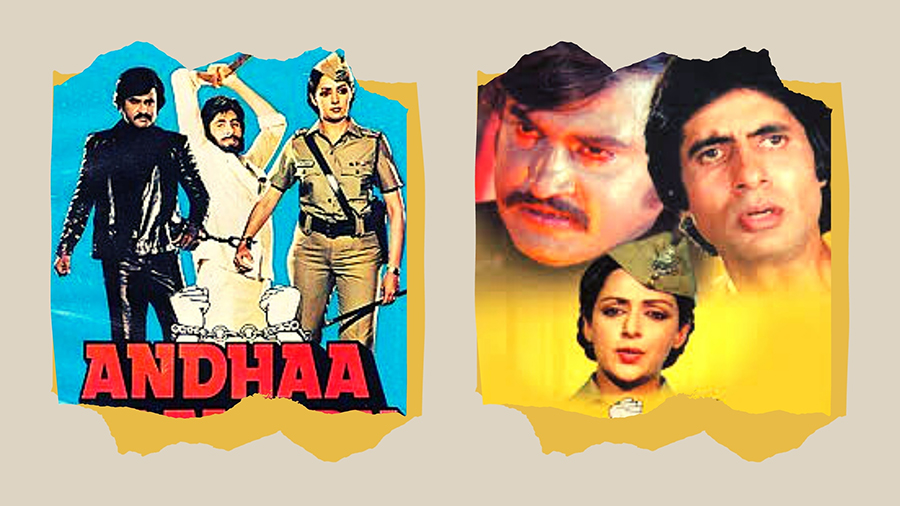 Directed by T.Rama Rao, this was a remake of the Tamil hit Sattam Oru Iruttarai. Packed with violent and melodramatic situations, it marked the Bollywood debut of superstar Rajinikanth in Hindi cinema opposite Reena Roy. Hema Malini played his sister.

Amitabh Bachchan fetched up in an extended guest appearance as forest officer Jaan Nisar Akhtar Khan whose wife Zakhiya (Madhavi) kills herself and their daughter after he is framed in a murder charge. In other words, the script is all set for a vendetta spree, which erupts on the steps of a hallowed courtroom.  Commercially successful, the Censor Board heavily cut some of its scenes. 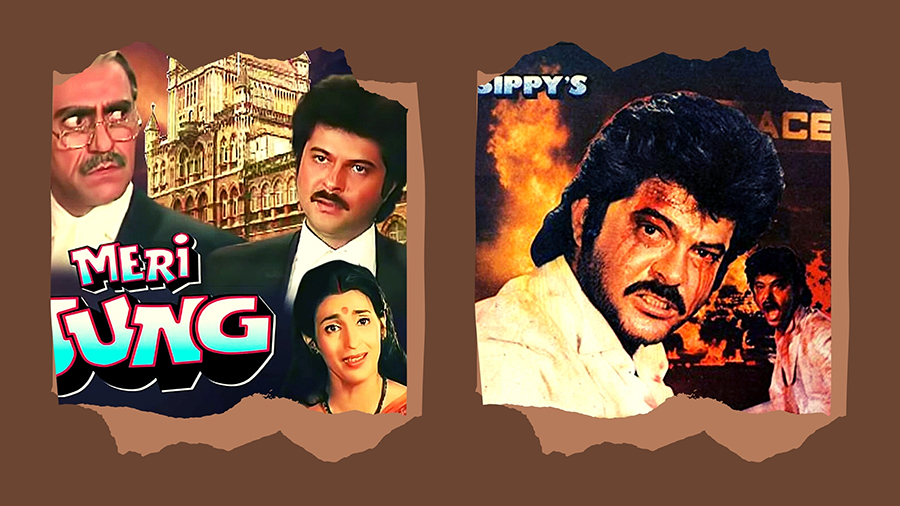 Showman Subhash Ghai’s opus featured Nutan, Anil Kapoor, Meenakshi Seshadri, Javed Jaffery, Khushboo, Parikshit Sahni, Beena and Amrish Puri in key roles. Top lawyers Arun Kumar and G.D. Thakral war against each other in the courtroom using punch lines constantly. Arun Kumar has a personal agenda against Thakral who had refused to help his father who had been wrongly accused and convicted of a crime.

The plot takes a nasty turn when Thakral’s own son Vikram is produced in court for the murder of his girlfriend Indu Gupta. Coincidence or not, Arun’s sister Komal is the prime witness. Anil Kapoor belted out a brilliant performance. His dialogue delivery left the audience asking for more.

This project, scripted by Javed Akhtar, was originally titled Shatranj and was to be directed by Ramesh Sippy with Amitabh Bachchan and Amjad Khan in the roles, which were eventually played by Anil Kapoor and Amrish Puri. Anil Kapoor was to appear in a negative role, which was played by Javed Jaffery. Changes happen for the better, at times, don’t they? 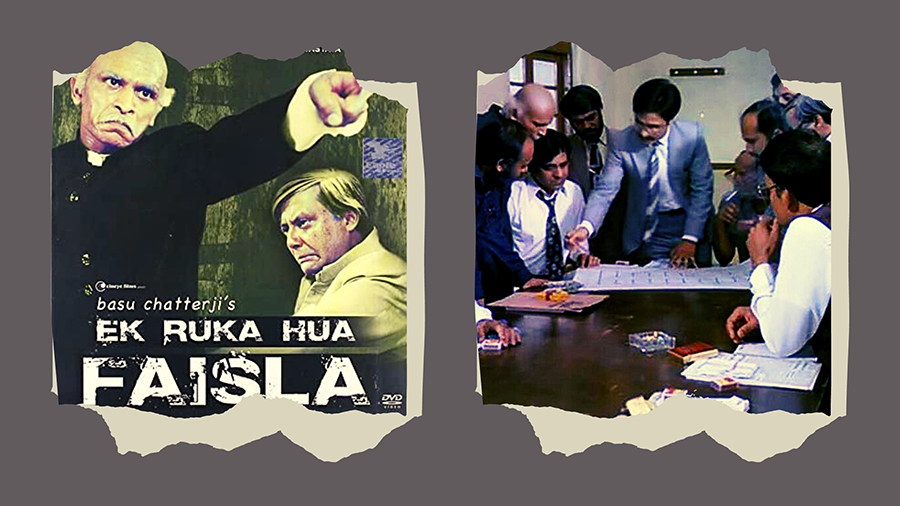 A remake of Sidney Lumet’s 12 Angry Men (1957), directed by Basu Chatterjee, entered a courtroom trial here in which a teenager is accused of stabbing and killing his own father. The onus was upon a jury of 12 lawyers of giving their verdict. This modestly budgeted and offbeat film takes you behind the scenes as the lawyers engage in a verbal battle with each other in a jury room.

The inspired cast included Pankaj Kapoor, M.K. Raina, K.K. Raina, Subiraj, Deepak Qazir Kejriwal, Amitabh Shrivastav and Annu Kapoor. All the 12 men, with the exception of one, are convinced that the teenager is guilty. Only one insists that the evidence is circumstantial, leading to a stalemate. It was taut and a nail biting film throughout. 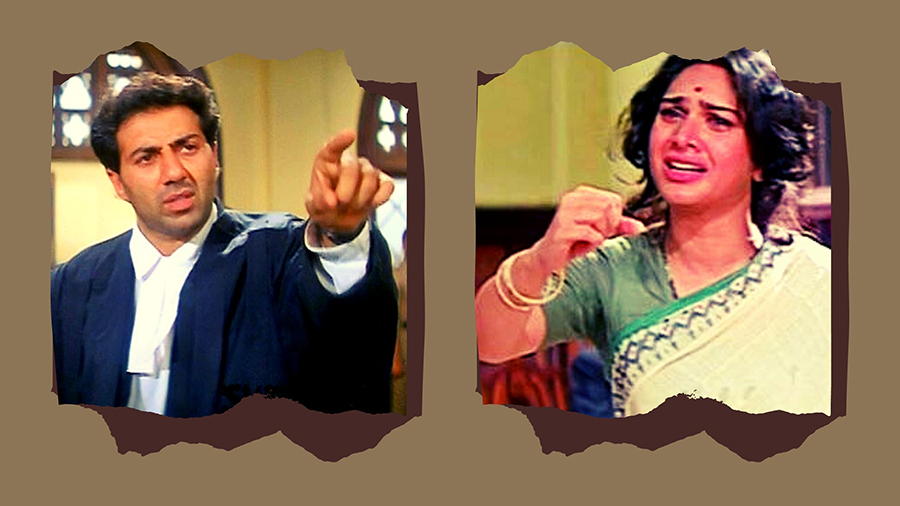 Damini was remarkable for its hard-knuckled phraseology in dialogues like “Yeh dhai Kilo ka haath” and “Tareekh pe tareekh”, which have become iconic along with the persona of Sunny Deol. Directed by Raj Kumar Santoshi, Meenakshi Seshadri played the eponymous Damini who hails from an upper middle-class family and rebels against her husband’s affluent family.

She is the sole witness of the rape of her household help committed by her brother-in-law. She wants the victim Urmi to get justice but the victim is killed and now Damini’s life is under threat too. A scheming lawyer resorts to unspeakable tactics but an alcoholic advocate Govind, who defends her in court, saves her.

Excellent performances by the entire cast, including Rishi Kapoor as Damini’s helpless husband and a cameo by Aamir Khan, contributed vastly to the film’s hit status. 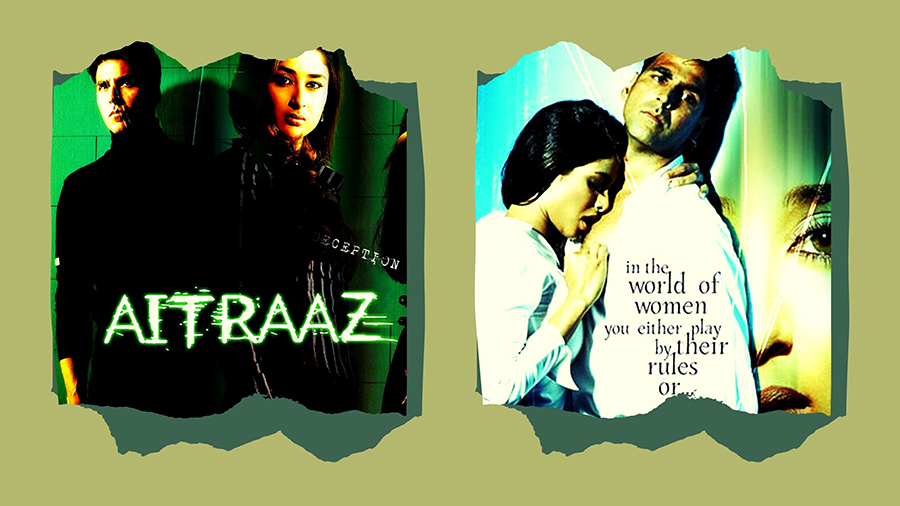 This romantic thriller - derived from the Demi Moore-Michael Douglas shocker Disclosure - zooms in on an incident of sexual harassment at the workplace. Raj Malhotra is startled to see his ex-girlfriend Sonia as the wife of his aged employer. Sonia makes advances towards Raj who is by now married to Priya, a lawyer. On facing rejection from Raj, Sonia accuses him of sexual harassment and forces him to resign from his job.

Priya takes up her husband’s case.

The second half located in the courtroom is especially riveting. Directed by Abbas-Mustan and starring Akshay Kumar, Kareena Kapoor, Priyanka Chopra, Amrish Puri and Annu Kapoor in key roles, the outcome was a winner at the ticket counters. Initially Ajay Devgn and Celina Jaitly had been selected for the roles played by Akshay Kumar and Priyanka Chopra. Just saying. 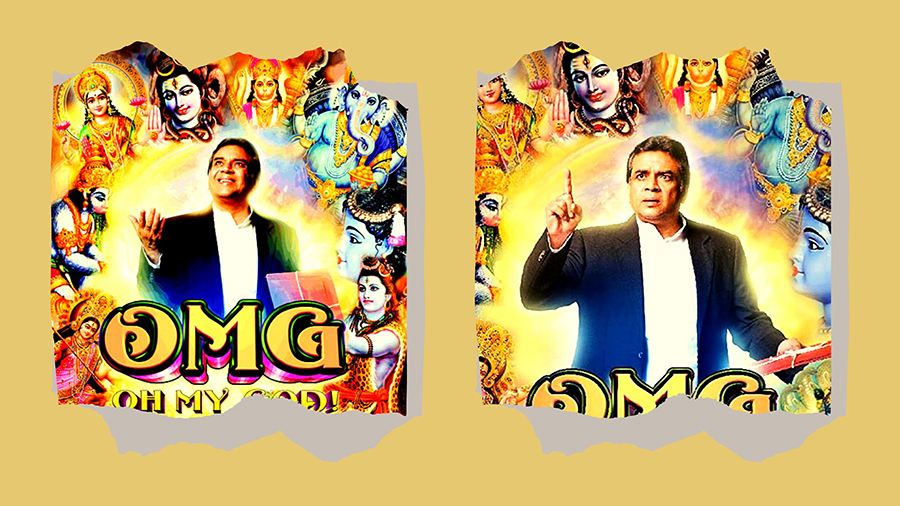 OMG – an unusual screenplay based on a stage-play revolved around the Kanji Virudh Kanji case. Kanji Lalji Mehta is an atheist whose shop is destroyed by an earthquake. His insurance claim is rejected since it doesn’t cover any damage or loss caused by a natural disaster or calamities. Now, Kanji bhai files a lawsuit against God, starting off a chain reaction.

Many more people file petitions against acts of God. Next, in this satire, Kanji bhai  meets Krishna Vasudev Yadav who helps him win the case and restores his faith in God. A commercial success, the project’s lead player was Paresh Rawal, who was bankable and first-rate. Akshay Kumar supplied the star value. 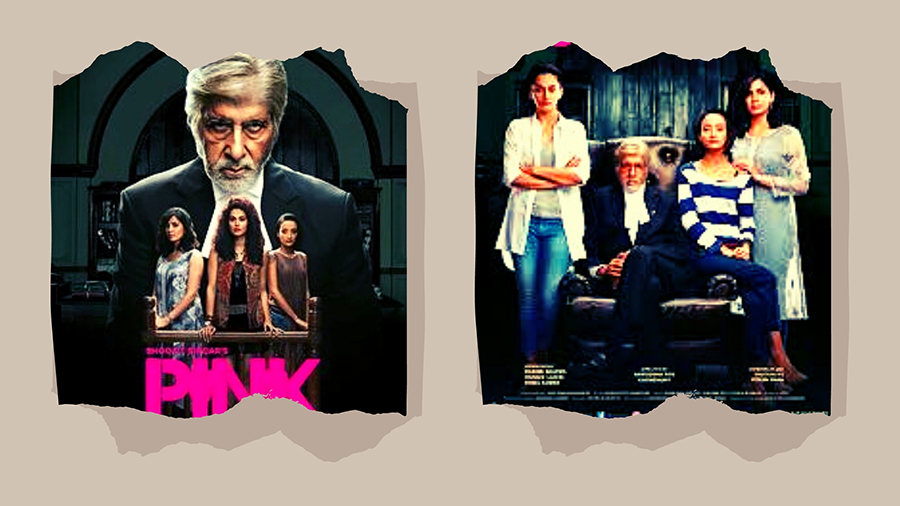 Aniruddha Roy Chawdhary directed this thought-provoking courtroom drama revolving around Minal Arora, portrayed impressively by Taapsee Pannu and her friends Falak and Andrea. They stay in a Delhi housing colony and have been sexually attacked by a group of young men. Lawyer Deepak Saighal who suffers from bipolar disorder defends the girls.

Amitabh Bachchan played a lawyer for the first time in his career. Piquantly, years ago he had played lawyer Shiv Shankar in Zamaanat directed by S. Ramanathan co-starring Vijayashanthi, Arshad Warsi and Karisma Kapoor which never saw the light of the day and is still in the cans.