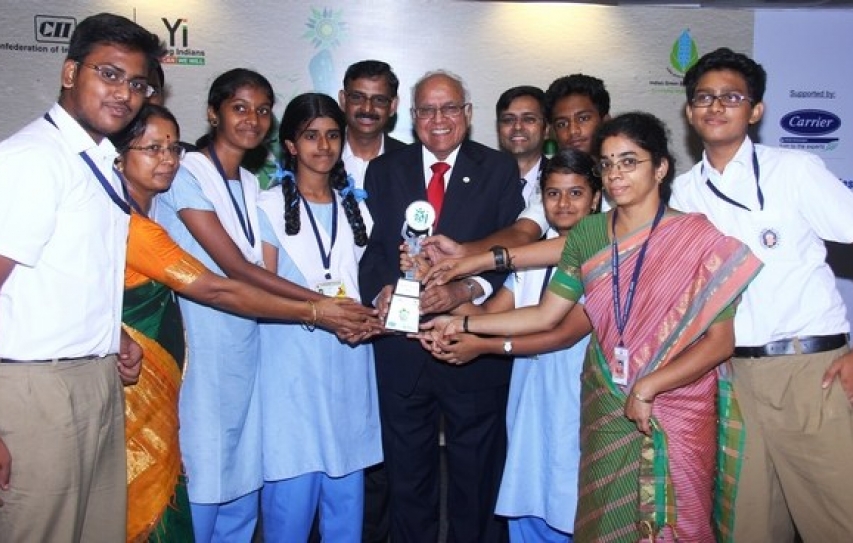 The 8th Edition of the Green I Contest

Hyderabad, Sept 03, 2014: Young Indians (Yi) is an integral part of the Confederation of Indian Industry (CII), a non-government, not-for-profit, industry-led and industry-managed organization playing a proactive role in India’s development process. Yi was formed in 2002 with an objective of creating a platform for young Indians to realize the dream of a developed nation. Yi has around 1650 direct members in 33 chapters, and engages around 10500 students through student nets, under the brand ‘Yuva’.

With support from United Technologies and Carrier Airconditioning & Refrigeration Ltd. (Carrier) and guidance from the Indian Green Building Council, Yi launched the Green I Contest to create the much needed awareness on environmental responsibility to the school children and future generation of India. The intent is to encourage students to think about conservation and sustainability measures that can be incorporated within their school / community and the winning school gets to showcase the implementation of ideas for the present and future generations of their school.

The pilot version of the Green-I contest was initiated in 2007 in Chennai and from 2008 onwards, it has become a flagship initiative of Young Indians. The contest has made a great impact in terms of influencing students to think about the environment and be aware of the various measures that can be taken to minimize the negative impact.

The 8th edition of the Green I Contest is underway now and has the theme, “One Thought At A Time”

The contest, like in the past years has been open to all the schools in India and the response has been good. A preliminary review of the submissions was done on 22 August 2014, of which five top teams were shortlisted and these include: The Choithram School (Indore), St. Kabir School (Chandigarh), Aashiana Public School (Chandigarh), Sri Venkateshwar International School (New Delhi), Smt. Ramkumar Devi Fomra Vivekananda Vidyalaya (Chennai)

All these five schools will travel to Hyderabad to make their presentations in front an elite jury on 03 September, 2014 at Hyderabad International Convention Centre (HICC) post which the winners and the runners-up will be announced. The winning school will get a grant of Rs. 7.5 lakhs towards implementation of their green ideas within their school campus.

The winning school will be rewarded at the inaugural session of the 12th edition of the Green Building Congress 2014 at 1000 hrs on 04 September, 2014 at Hyderabad International Convention Centre (HICC), Hyderabad and the winning school will get to make a presentation during one of the plenary sessions on “Young Minds Going Green” on the same day.

“UTC and Carrier take great pride in associating with the Green I Contest and Young Indians in spreading the message of ‘green’ amongst the youngsters in India today. The theme of this contest is directly related to our company’s goals on sustainability as we strive to create products and services that are environmentally sustainable. We are very delighted at the prospect of working with young children around the country in the quest to make them more responsible and aware of environmental concerns and to act accordingly,” said Mr. Amit Maheshwari, director – marketing & strategy, Carrier India.

“Schooling is the formative phase in one’s life and the idea of the Green-I contest is to reach out to as many school children as possible. Over the last 8 years of the Green-I contest, we have created a nucleus effort to inculcate environmental responsibility and shape future citizens of India” – Deepa Sathiaram, Mentor Green-I contest, Past National Environment Chair, CII-Young Indians and Executive Director, En3 Sustainability Solutions