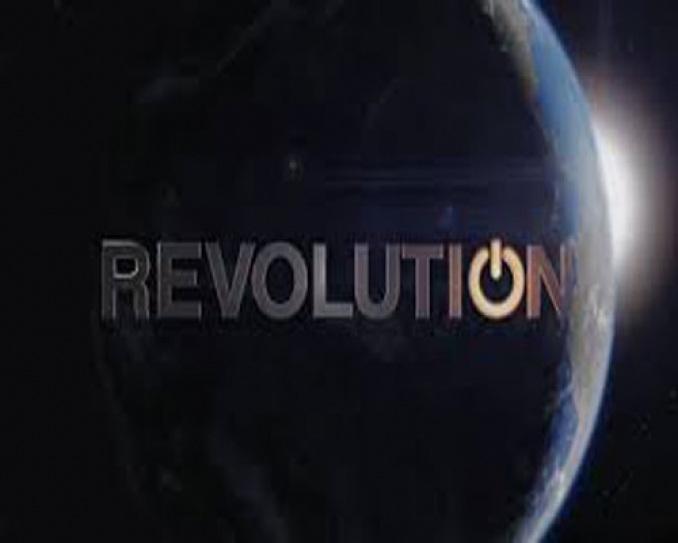 The fictional concept at the heart of the television series ‘Revolution’ – which picks up 15 years after the start of a worldwide blackout – is the day-to-day reality for billions of people living without power, a reality United Nations field staff helped flesh out for the show’s writers ahead of its second season, which premiered last night at UN Headquarters in New York.

Portrayals of endless tents at “Savannah Refugee Camp” and war lords offering hostages sweet tea at the beginning of a meeting are taken directly from experiences UN workers have had in places like Afghanistan, Democratic Republic of the Congo (DRC), Sudan, and Syria.

“We spent a lot of the first season talking about ‘what ifs’ and that has become ‘what can we use,” said actor Billy Burke during a post-screening panel that brought together some of the cast and crew, and the UN experts who had collaborated on the second season of the show.

‘Revolution’ is a post-apocalyptic science fiction television drama series that takes place in the United States 15 years after the start of a worldwide blackout, according to NBC.

Series creator Eric Kripke said it was “surreal” when the UN reached out to ask for help in highlighting the global energy crisis to the show’s audience in a meeting that included Under-Secretary-Generals Valerie Amos, who heads the Office for the Coordination of Humanitarian Affairs (OCHA), and Peter Launsky-Tieffenthal at the Department of Public Information (DPI).

Worldwide, almost 3 billion people rely on traditional biomass for cooking and heating, and about 1.2 billion have no access to electricity, according to UN figures.

Lack of electricity impacts every aspect of life ranging from how people store food, to how they learn, to their sanitation and access to medical aid, Mr. Launsky-Tieffenthal said in his welcoming remarks.

UN Secretary-General Ban Ki-moon launched in 2011 the Sustainable Energy for All Initiative. It aims to achieve three inter-linked global targets by 2030: universal access to modern energy services; the doubling of energy efficiency; and the doubling of the share of renewable energy in the world’s energy mix.

“We are all interconnected. We all rely on the same ecosystem that sustains life on earth. Our actions in New York affect a woman in rural Bangladesh,” Ms. Seyedi said, adding that Manhattan on its own consumes as much energy as all of Kenya.

She suggested a greater emphasis in future episodes on sustainable energies, such as wind turbines and solar panels that use the power of sun and wind.

The opportunity to work with UN field experts such as Derk Segaar, who had spent several years in South Sudan and Darfur providing humanitarian support with OCHA, and to get stories directly from people on the ground is “ideal” for the show, said Steve Tao, head of TV for J.J. Abrams’ Bad Robot production house which is responsible for “Revolution.”

It was the UN Creative Community Outreach Initiative (CCOI) through its partnership with the UN Foundation that initially approached Good Robot, the philanthropic arm of Bad Robot, about collaborating with the show.

“The United Nations is sometimes bad about getting its messages out to the world, particularly in a way that makes sense to the general public,” said Mr. Segaar, OCHA Chief of Communications in New York.

Following a screening of the season premiere, he said the portrayal of a warlord, whose character emerged fully from conversations between the show writers and the UN, was realistic.

“We were a week’s travel in the middle of nowhere to meet one of the most notorious war lords and spread under a tree was a picnic with little tea cups,” Mr. Segaar told the panel recollecting negotiations for safe passage of food convoys in Darfur.

The leader was well-educated and polite, “and then in the middle of the picnic he takes out his gun,” Mr. Segaar said.

He also made reference to portrayals of refugee camps, “Just imagine the scale. In every single tent there is a family that doesn’t want to be there. It is a history of broken dreams times a thousand.”

The relationship with the UN also impacted filler dialogue. At one point, one of the main characters offhandedly remarks that someone he had gone to school with came down with polio, a reference to lack of vaccinations and re-emergence of long eradicated diseases – also priority themes for the UN’s work.

Actors Giancarlo Esposito and Tracy Spiridakos also participated on the panel, which was moderated by director and producer Fisher Stevens.

Season two of ‘Revolution’ premieres on 25 September on NBC in the United States, as well as on Foxtel in Australia and CityTV in Canada. It will also air on 27 September on Syfy in Spain; 2 October on Star in India, TVNZ in New Zealand and SOHU and IQIYI online outlets in China; 5 November on Cinemax LATAM (HBO) in Latin American countries and February 2014 on NOTTV in Japan.

Building on successful collaborations with films such as The Interpreter, starring Nicole Kidman and Sean Penn, and Che, with Benicio del Toro, the CCOI was established by Secretary-General Ban Ki-moon in 2009 to help story tellers in the entertainment industry include global issues on the UN agenda into their productions.