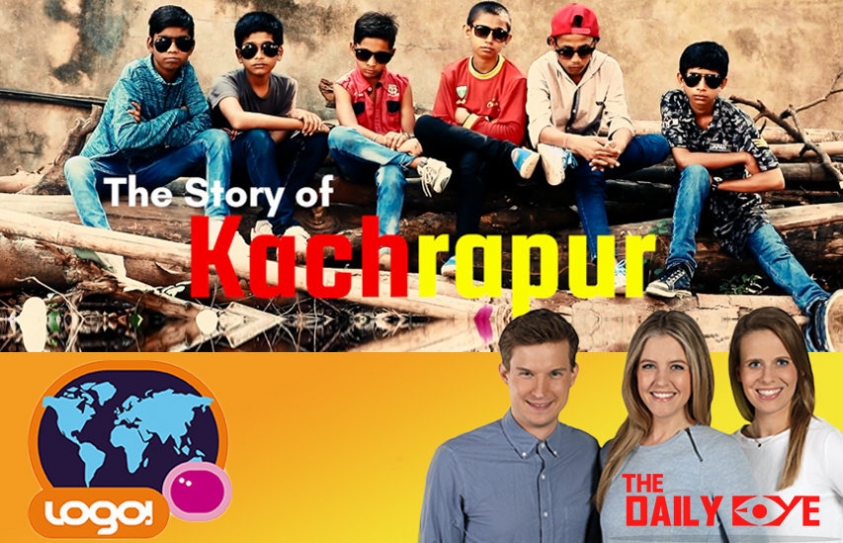 The children of a tiny little slum in Patna are rejoicing over their new-found success and identity. A peppy little song, The Story of Kacharapur made by these children from the Saidpur slums of Patna, Bihar was broadcasted on the German TV channel, ZDF yesterday evening. This peppy rap song is going places.

ZDF (Zweites Deutsches Fernsehen), a German public-service television broadcaster, in its daily news programme for children “Logo!” (https://www.zdf.de/kinder/logo/) spoke about The Story of Kacharapur. Logo! aims to pass on knowledgeable information to children in a way which is easily accepted by them. The show’s target audience are children between the ages of 8 to 12 years. In the show, children contribute to it just as reporters or contributors via the internet and this form of edutainment is widely viewed. The show has a daily reach of 400,000 children and has won Germany’s acclaimed TV prize – Deutscher Fernsehpreis.

The Story of Kacharapur is a short-film made by Abhishek (14), Amit (14), Sonu (14), Jasbeer (11) and Piyush (13) from the Saidpur slum in Patna under the mentorship of Aaron Edwards, a Filmmaker at the Asian Centre of Entertainment Education. It is a lively number highlighting the story of how Sundarpur (beautiful place) becomes Kacharapur (garbage place), and a boy’s nightmare that makes him realize that the environment around him is choking and that he needs to wake-up to the reality and do something about it. The film was an effort of the children of the Saidpur slum in Bihar under the Little Directors Program.

The Little Directors is a well-known program of the Children’s Film Society of India, an autonomous body under the Ministry of Information and Broadcasting that produces, exhibits and distributes quality content for children. The Little Directors program is a brainchild of Dr. Shravan Kumar, the Former CEO of CFSI and Present Joint Secretary, Ministry of Culture and Vice Chancellor of the famous Nalanda University.  Under the program, CFSI organises a series of filmmaking workshops for the children in the age group of 7 to 16 years belonging to various parts of India.

Over the last five years many short films have been created and produced under the CFSI umbrella, by children themselves. The films have been showcased at the International and National Film Festivals, which are hosted by the CFSI every year; and children have been encouraged to express their lives, trials and tribulations through the film medium.

This year, the Phase 1 of the Little Directors Program in partnership with the World Bank-DIME and Asian Centre for Entertainment Education (ACEE) reached out to media-dark areas in the state of Bihar like Begusarai, Lakshisarai, Nawada and the slums of Patna. ACEE and its team of filmmakers steered a five-day filmmaking workshop for children from these communities on the issues concerning Water and Sanitation, specifically related to Swacch Bharat Mission at the intersection of Gender.

The outcome at the end of this workshop were five short films on the issues– Master Ki Class, Swachchta Ki Khoj, The Story of Kachrapur, Souch Souchalay and Bachpan. The films were produced, created, acted and developed by the children from the five communities of Bihar. They were also showcased at the International Children’s Film Festival 2017, held in the city of Hyderabad from 8th to 14th November 2017, where the children presented their films to global audiences and press.

Hats off to these young talents from the corners of India!

Watch the other four short-films made by these talented little kids of Bihar as part of the Little Directors Program.