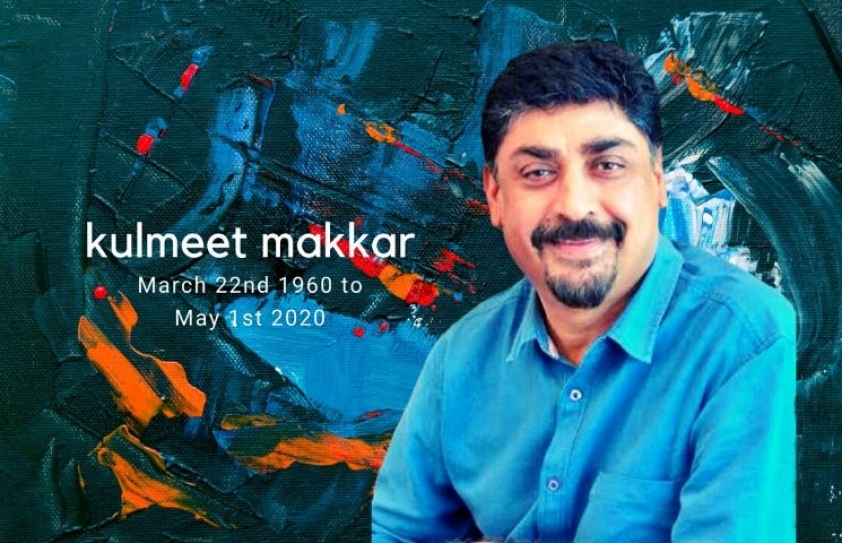 Kulmeet Makkar: The man who never said ‘No’

A thought crossed my mind as I said a small prayer last night, “I’ve written two tributes back to back for Irrfan Khan and Rishi Kapoor and I hope I don’t have to write a third one tomorrow?”

As I said this to myself in deep sadness, I slipped into the land of dreams.

When I woke up this morning, it was director Ken Ghosh’s post on Facebook I saw first, “Waking up everyday to sad news. Kulmeet Makkar passed away. Did so much for the industry through the Producers Guild.”

I rubbed my eyes and read it again and I thought to myself, “This can’t be true?”

I scrolled further and my friend and Creative Producer Chitra Subramaniam’s post is what I encountered next, “Kulmeet Makkar, really unfair of you to say goodbye. Now, who is going to instill belief in me, care for me as you have done, hold my hand through thick and thin? You are missed my dearest friend, brother and champion”.

I switched to Twitter and Karan Johar spoke there, “Kulmeet you were such an incredible pillar to all of us at the Producers Guild of India... relentlessly working for the industry and towards its enhancement and advancement... you left us too soon... We will miss you and always remember you fondly.... Rest in peace my friend...”

I rubbed my eyes yet again. I sat up with my shoulders slumped as I said to myself, “No”.

What flashed in my mind in that instant were the words Kulmeet Makkar always said when I would call him, “Haanji boliye… what can I do for you?”

On one occasion I had said to him, “Sir, aap pehle se hi haan keh dete ho (you first say yes), before I even tell you what I want you to do for me,” and his response to me was, “Aapka kaam karna hi hai toh (I have to do your work so) how does it matter what it is that you are going to ask me for?”

Such was the man called Kulmeet Makkar: The man who could never say the words, ‘No, it is not possible’, to anybody.

Now he is no more. Hard to believe it but he has also gone.

He was in Dharamsala with his wife and he passed away because of a massive heart attack in the early morning.

A fine, young, healthy and fit man, he’s also gone. Just like that?

Kulmeet Makkar’s wife Mamta, grieving as she is, spoke to us on a Whatsapp group, which Kulmeet Makkar is also a part of and where many of us were expressing sorrow to each other. It was almost surreal when she stepped into the conversation and thanked us for sharing memories of her husband with each other.

Amit Behl, actor and Senior Joint Secretary and Chairperson of Outreach Committee of Cine and Television Artistes Association (CINTAA) called and said to me, “Bebu (many of my close friends call me by the name) we cannot lose Kulmeet Makkar. We cannot afford to lose him. He is a one-man army working tirelessly with us and helping all the associations deal with this crisis we’re facing because of Coronavirus. He’s helping us deal with daily wagers and the problems they are facing. What is going to happen now? There is nobody in the industry who can replace him”. 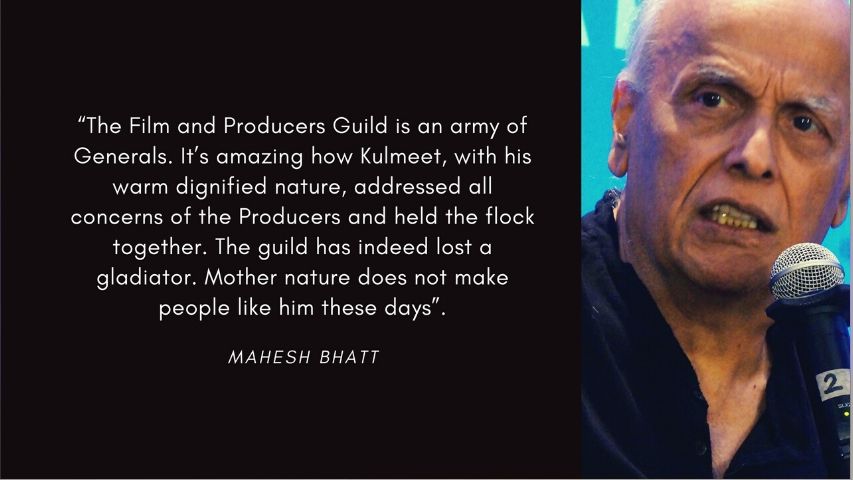 I asked Mahesh Bhatt to tell me what he is thinking and he said to me, “The Film and Producers Guild is an army of Generals. It’s amazing how Kulmeet, with his warm dignified nature, addressed all concerns of the Producers and held the flock together. The guild has indeed lost a gladiator. Mother nature does not make people like him these days”.

Amit Khanna, who I shared my shock with through text, replied to me, “Kulmeet was a person managing both the industry contradictions and external expectations. His affable self made him an excellent bridge between the entertainment fraternity and the rest of the world. He’s going to be missed for his hard work and unflappable personality”.

This group that we’re all a part of is called The Change Narratives Alliance, which Kulmeet Makkar was instrumental in helping me create and build with UNICEF and Centre for Media Studies. Without his tacit support it would not have been possible for us to consolidate the partners and to keep it going for over two years now. He helped us bring several organizations to join hands with each other and align on a common objective - “Build a better world through stories”.  The partners in this Alliance include Foundations (Bill and Melinda Gates Foundation, UNICEF), NGO’s (Population First, PFI), Research and Evaluation partners (World Banks DIME unit, CMS), Content Strategists (ACEE-The Third Eye Program) Academic Institutions (Ashoka University), Audience Research Council (BARC India), Networks, Studios (ZEE, Star), Producers (PFI, BBC Media Action, Sesame Street, ACEE), Digital Platforms (Indian Television.Com, The Daily Eye) and Associations that govern the Industries of Media and Entertainment like the Producers Guild of India, CINTAA, Screenwriters Association and groups like Cinema Collective and the Creative Council of India. 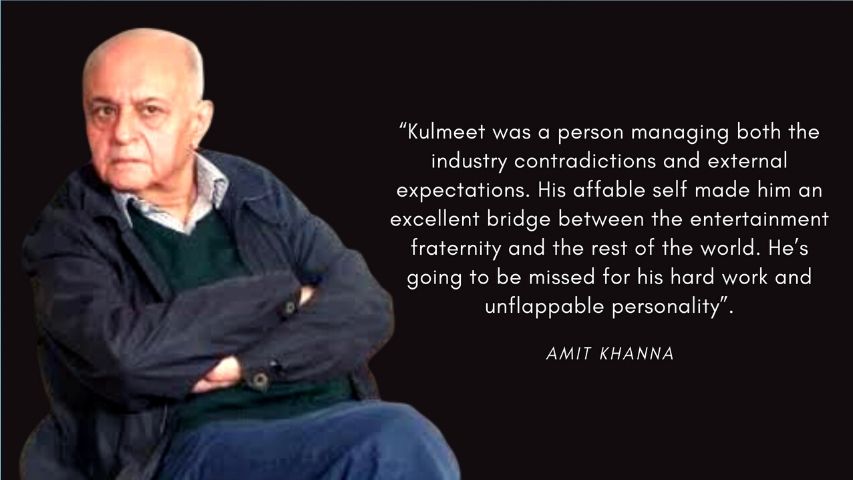 It was in the year 2012 that Mahesh Bhatt introduced me to Kulmeet Makkar. I had gone to Bhatt Saab to ask for his support to launch The Third Eye program in India, which was in partnership with Norman Lear Centre’s Hollywood Health and Society, University of Southern California Annenberg. Bhatt Saab said to me that I should meet Kulmeet Makkar and that he will help me. When I met Kulmeet Makkar at the guild’s office, he had already arranged for me to meet Leena Jaisani, Director and Head Media and Entertainment at FICCI. Before I could tell him what I had come to meet him for, he said to me that he had already spoken to Leena and that she had consented to give us a slot at the soon to be held FICCI Frames, Asia’s largest conclave for the industry of media and entertainment, which was scheduled to be held in March 2013 and that I could showcase the program there. Responding to the disbelief in my eyes he continued, “Chhoti moti cheese kyun karein (Why do small things), launch karna hai toh style mein hona chahiye na (If we must launch we should launch in style, right)?”

Stunned to silence I nodded my head and both Leena and I shook hands with each other. Then Kulmeet Makkar said, “Bas done? Chalo, ab mujhe bhaagna padega (Done, now I have to run), do teen bahut zaroori kaam karne hain (I have some very urgent jobs to attend to now)” and the meeting had finished in five minutes.

The Third Eye program was launched in March 2013 at FICCI Frames; could there have been a bigger way to do it?

On the day before the launch he called me on phone and in his humble way he said to me, “Ek chhota sa request hai (I have a small request to make)”.

He said, “Can I request you to include one more person on your panel?”

I said to him, “Why not Kulmeetji, who do you want me to include”, and he said, “Gautam Ghosh”. I was like, Gautam Ghosh? Is he asking me to include the filmmaker and director, Gautam Ghosh on my panel? Did he even need to request me for that?

Such was the man. He would add exponential value to whatever you were doing in your business and behave as though it was you who was doing him a favor.

I cannot imagine how God has taken away such an amazing, humble, giving, polite and most knowledgeable man like him from us.

And here is Kulmeet Makkar along with Romil Rangarhia and Carol Andrade in conversation with Anupama Mandloi at Elevate 2019.