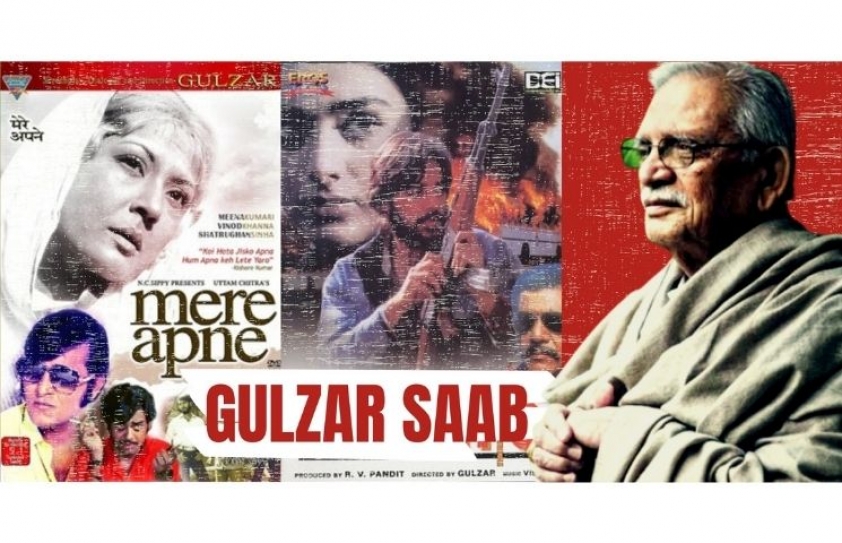 Juhi Saklani looks at the way filmmaker, poet, lyricist and writer Gulzar creates language and immortalizes his words by making them unforgettable in the minds of his fans.

So identified is Gulzar-the-poet with lyricism, sensitivity, and romance, that Gulzar-the-humorist – with his wit, wordplay and (as he would say) his 'badmaashi' – gets to relax in an armchair on the sidelines and sip his tea at leisure.

And yet, the writer-director-poet-lyricist has been associated with some of the most rewarding comedy films of his times. Think Chupke Chupke (1975) - dialogue and screenplay, Angoor (1982) - lyrics, screenplay, dialogues, direction and Chachi 420 (1997) - lyrics and dialogues. His playful lines bring a heart-warming lightness to the solemnity of 'serious' subjects like death in Anand (1971), while the wit of his lyrics add so much to the sheer fun of movies like Golmaal (1979).

Who would coin a female version of the word 'sapna' as 'sapnee' – invoking the tender ridiculousness of dreaming about Lata Mangeshkar? Ik dinn chhoti si ek sapnee; Wo jo hai na, Lata apnee? - in Golmaal.

Who would make a bride sing on her wedding day, in Saat Khoon Maaf (2011) - "Darling, sorry tujhe Sunday ke din zehmat hui" (Darling, sorry to have given you trouble on a Sunday)? Gulzar would.

All over the place he leaves his gently chuckling footprints - in interviews, in dialogues, in lyrics, and in life. When his daughter was born at 3.30 pm, he announced that she had arrived in time for the matinee show. He named the baby Bosky after the Chinese silk popular in his time and when asked what he would have named if a son was born he replied, "Latthha" (cheap cotton fabric)! Incidentally, he affectionately describes wife Rakhee, who lives separately, as the longest short story of his life.

In a literary festival, a lady asked the poet why he had written the line "Ek sau solah chand kee raatein" (Mera kucch saaman - Ijaazat). Why 116 nights? Deadpan, he replied, as if explaining it, "Actually my math is a bit weak, it should really have been 117..." 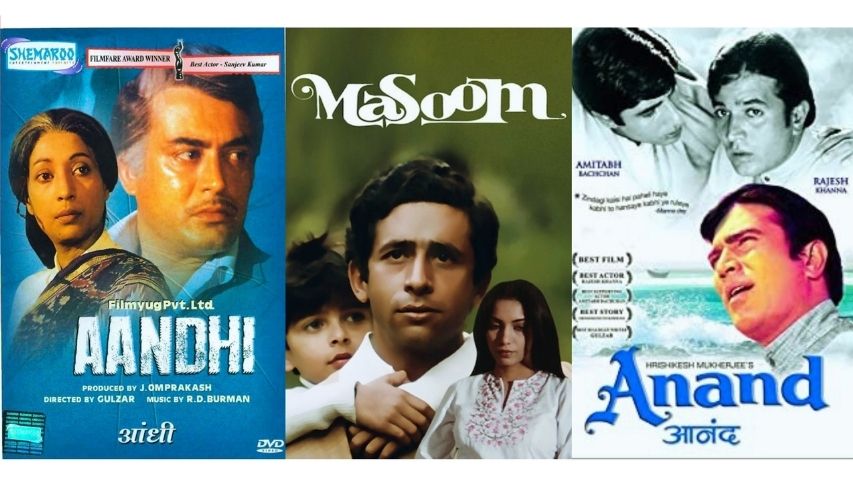 On good friend Jagjit Singh's 70th birthday concert, Gulzar took the podium to speak. The ghazal maestro sat on the singer's seat, well dressed in a new kurta, tiny bits of his sideburns showing a distinguished grey. Gulzar, older than Singh, stood and twinkled at him: "Kabhi to hum bhi sattar ko pahunchenge... hamaare bhi baal kaale ho jayenge" (Someday we too will be 70... our hair too will turn black)! But will Gulzar ever reach 70? When the lyricist Swanand Kirkire asked him the secret of his youthfulness, the poet replied: "I am still waiting to grow up. The heart is a child. I am still bringing up that child-heart.

And from "Neena ki nani kee naav chali" – Ashirwad (1968), to "Chakbak Chakbak" with the horse who gallops in Mehrauli but is actually an Arabian steed – Masoom (1983), to "Chaddi pehen ke phool khila hai", invoking Mowgli blossoming like a flower in his underpants - Jungle Book (1993), so many of us have been in a constant state of childhood with Gulzar. If we do grow up, "Yaad hai... humne gilahri ki jootthe matar khya the" (Remember... how we ate peas that a squirrel had pecked at)

Multilingual as the writer is – Urdu, Punjabi, Hindi, English, Bengali, Farsi and a smattering of north Indian languages like Awadhi, all sit comfortably on his tongue - his songs glide in and out of languages with ease. And the use of an unexpected Punjabi or English word in an otherwise Urdu or Hindustani song often takes away any pomposity from the Serious Business of Poetry and brings in a delightful light-footedness.

In Maya Memsaab (1993), "Khud se baatein karte rehna" has the heroine singing one of Gulzar's favourite Punjabi words in the line "Ainweyin (just like that/for no reason) buss roothi khud se, ainweyin mante rehna". In Khushboo (1975), the heroine sings for her beloved who is a doctor: "Gaanv gaanv mein ghoome re jogi, rogi changey kare". The Punjabi word 'changey' (well) is perfectly placed in its whimsicality in the song, which has Hema Malini and Farida Jalal skipping merrily along. In Bunty aur Babli (2005), the young lead pair escapes their oppressive small town lives, running away from "Khali bore dopehron se" (empty boring afternoons). The use of the English 'bore' for small town afternoons as experienced by youngsters is spot on.

Back in 1970, senior poets accused Gulzar of absurd metaphors, when, in the highly romantic song 'Humne dekhi hai' for Khamoshi, he wrote of fragrant eyes (Unn aankhon ki mehekti khushboo). In later avatars, the same Gulzar has written about eyes as if invoking those aunts who keep asking why you are not married yet, trying to find out if something is 'going on', and we say indignantly, "she asks such personal questions!" - "Aankhein bhi kamaal karti hain, personal se sawaal karti hain" (Bunty aur Babli).

In his dialogues, the use of spoken English adds its own flavor. Rajesh Khanna's Anand used to make friends with strangers on the road by pretending to recognize in them an old acquaintance Murarilal, and saying, "Yaad nahin, Qutub Minar pe beer pila ke out kar diya tha"? Being ‘out’ is a state alcohol lovers of India would recognize immediately! But it is a different state from the 'out' invoked in the Golmaal song "Sapne mein dekha sapna", when Amol Palekar is fantasizing about ousting Amitabh Bachchan: "Market se out hua, logon ko doubt hua, meri wajah se woh gaya". 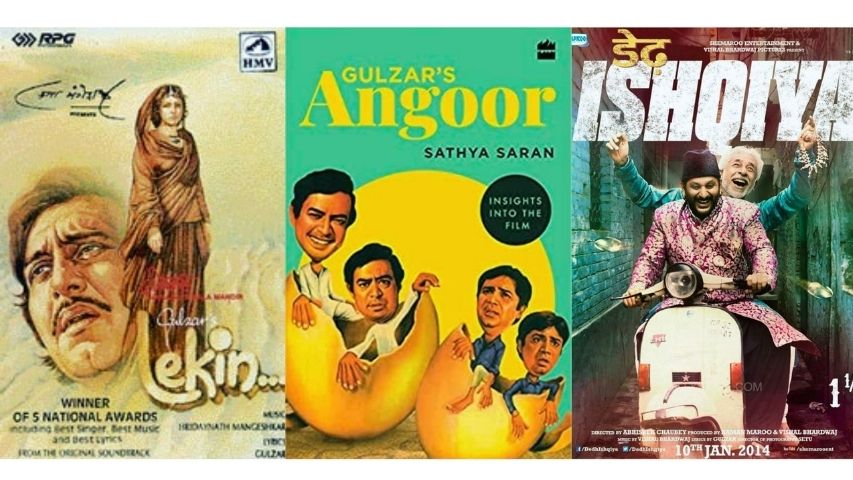 See how a much-used English phrase adds to the punch line in this scene from Chupke Chupke. Amitabh Bachchan's Sukumar Sinha, forced into impersonating Dharmendra as Parimal Tripathi, is now rebellious because Asrani's sister-in-law Jaya Bhaduri thinks he is a married Parimal acting lecherous towards her:

There is a strain of affectionate indulgence for the foibles and eccentricities of human beings as well as life that runs through Gulzar's work. Witness Angoor (1982). Sanjeev Kumar, having read way too many pulp crime novels, visits a new town with a bagful of money. He is suspicious and vigilant. He knows how gangs operate! No one can fool him! He alights at the railway station, enters a taxi, and is asked the standard question:

Taxi driver: Kahaan chalna hai? (Where do you want to go?)

Sanjeev Kumar - immediately suspicious: "Kyun bataa-ein tum ko?" (Why should I tell you?)

The near-legendary driver, created by Gulzar, of course, is Pyaremohan Illahabadi in Chupke Chupke, who arrived into our hearts by a Lauhpad-gamini Agnirath, bought an English primer, and drove Jeejaji, Om Prakash, up the wall.

In another case of deliberately faked identity, Kamal Haasan, wearing a Maharashtrian sari and in full Chachi 420 regalia, is surreptitiously scrambling down a drainpipe from his bathroom window. A neighbor watches in astonishment. "What are you doing”, she asks. The flustered Chachi says in her usual deferential tones: "Woh... pipe se paani neeche nahin aa raha tha.. toh... maine socha... main hee aa jaati hoon" (Ummm... water was not going down the pipe... so.. umm... I thought I will).

What is called 'staying positive' - or as Gulzar says, "to breathe oxygen into the suffocation of society" - is both a joyous right and a happy duty for the poet. "My songs are not angry or bitter, because I am not bitter. I’m hopeful, and as an artist I have to be, not just for my future or for the future of my children, but for the whole world”.

In several interviews he has spoken of the fixed 'serious' image people have of him: "They want to see you in that frame, because that’s the frame, which they admire". But the poet keeps pointing out that he wears shorts in the morning and goes to play tennis - that he wears trousers often with that white kurta - that he loves driving - that he uses Skype and talks a lot! Gulzar's playfulness sometimes gets neglected in this myth making – in the flattening of a rich and complex life's work into the poet's white-kurta clad persona. But it's as much of a pleasure to recount his laughing trajectories as his moonlit metaphors or his explorations of life.

This article simply lists some of those trajectories, with immense giggly love for the poet. And this writer swears, as Gulzar himself declaimed in an interview:  "Maine mike ko haazir-naazir jaan ke, jo sach tha wohi kahaa hai"...