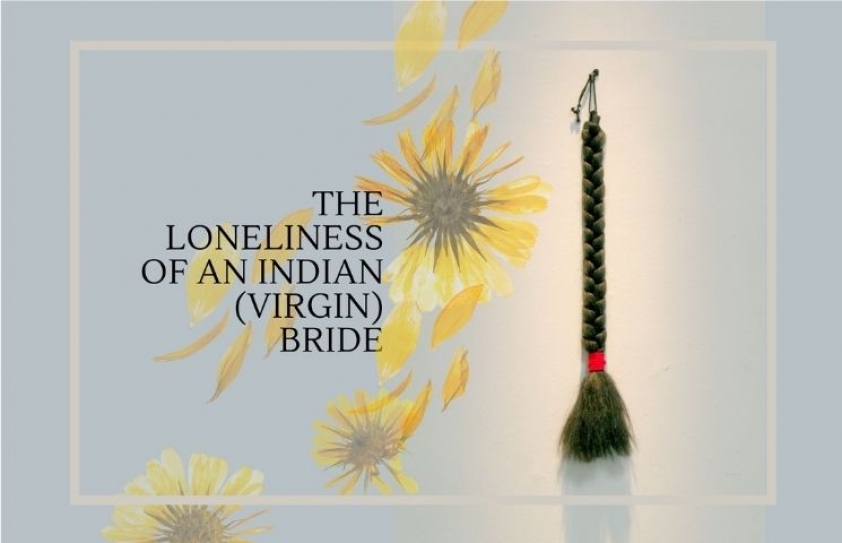 What are Indian wedding dreams made of? – a question Janaky Sreedharan answers as she views it through the lens of the researcher, screenwriter and filmmaker Ranjini Krishnan

A garlanded nuptial bed adorned by a heady mix of white jasmines, orangish pink kanakambaram and marigold yellows; the customary tumbler of milk alongside golden bananas on a brass platter by the bed, a bashful bride and a swaggering bridegroom - aren’t our wedding tales strewn with these fantasies? Liberally peppered all along with alluring oral narratives, popular film songs and sensuous film sequences.

It has always been an evergreen moment in Indian commercial cinema epitomized by that iconic song ‘Kabhi Kabhi’, soaking the first night in all its seductive charm and promise of consummation. And the figure of the virgin was at the center of it all - as the ultimate signpost of a patriarchal sexual economy set up on roti-beti vyavahaar. That permissible dose of erotica is vital to our humdrum lives to drape a delicious mystique around hetero-normative family romances.

What she felt deeply was the intense loneliness of the young virginal bride, poised at the threshold of a space at once private and public, between memory and forgetting. Contrary to many common myths and anecdotes of wedding nights, what tumbled out mostly were horror stories of trauma, violence and dread.

Through the format of unstructured interviews, where she just left the women alone with a recorder, she was totally overwhelmed by hundreds of unprecedented testimonies. ‘I could not find a single pleasant story’, she says, recalling her sheer emotional exhaustion. In the process Ranjini was also encountering the inadequacy of the classic psychoanalytical methods to address the experiential impact of this event on countless women across ages, across spaces - the gap between historical accounts and lived experiences, their attempts to flee from the terror of it all in their own ingenious ways; a desperate wish to control the narrative.

Like Sheherazade of the Arabian Nights who escaped death, who thwarted the Sultan’s attempt to behead her through endless cycle of stories, Ranjini found fascinating resemblances between the mythical heroine and the contemporary brides, which urged her to title her short film ‘Daughters of Scheherazade’. She was making a deliberate choice to use the form of cinema to grapple with these experiences whose psychic significance demands an articulation beyond the language of academic enquiry. 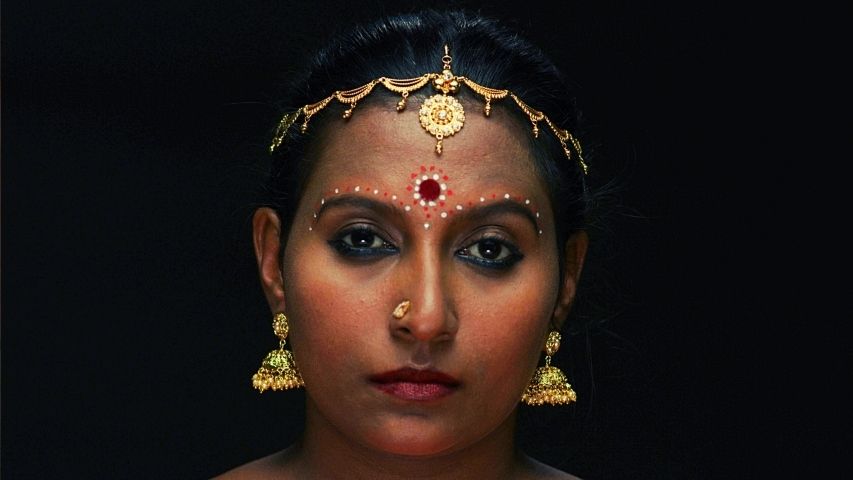 Produced by Tropical Cinema and supported by India Foundation for Arts, Ranjini’s nineteen minutes long directorial debut leaves the spectator hollowed out and wishing for more. As a screenwriter of the films directed by her partner K.R. Manoj, known for his films Kanyaka Talkies and A Pestering Journey, she had already become familiar with the ropes of filmmaking.

As we watch the transformation of her doctoral work completed at the Centre for the Study of Culture and Society into a film, what fascinates me as a viewer is the way in which the research findings are distilled into an immersive world of images and soundscapes. It seeks to find a way to imagine the domain of affect and not dwell much on the familiar historical accounts, which according to Ranjini focus mainly on the “structural transformation of the family.”

From the very first close up shot of the false plait, which is picked from the expanse of a blank white wall and worn by a heavily ornamented tired looking bride, there is a procession of images that intrigue and tease.

“I remember, this was a curious thing for me... something that comes from my childhood… in school youth festivals or a cousin’s marriage... I have seen this thing laying around on the table... a very uncanny presence this plaited hair has. And the moment the bride or the dancer puts it on her head it actually becomes something that increases the femininity. So there is a playful performativity involved in this entire thing called plaited hair.” Her reflections on her practice offer interesting insights into the interplay between her conceptual thinking and shot compositions. The popular Tamil number ‘yaaro yaaroti’ from the movie ‘Alai Paayuthe’ accompanying the video image becomes a fitting background score to the filmic representation of this conjugal moment, a vital trope in the modern Indian familial imagination.

Of the many bridal figures, which have dotted the variegated wedding-scape of this subcontinent, Ranjini focuses on the one in the ‘modern bedroom’.

“The modern secular bedroom is devoid of any kind of ritual. There stands this guy, the modern husband, who married this woman and who is supposed to take away her virginity, conquer her and subjugate her... you cannot find a first night in Nalacharitham but if you take a 1970’s film, this scene is a must because that was the time when the modern monogamous conjugal unit was getting stabilized in Kerala and this had to be there in the popular culture.”

So, in a way, Ranjini’s film is critiquing a cinematic legacy that has shaped our collective unconscious and gendered sensibility. What follows is a steady heartbreaking erosion of the euphoria we have built around the fantasy of the first night. 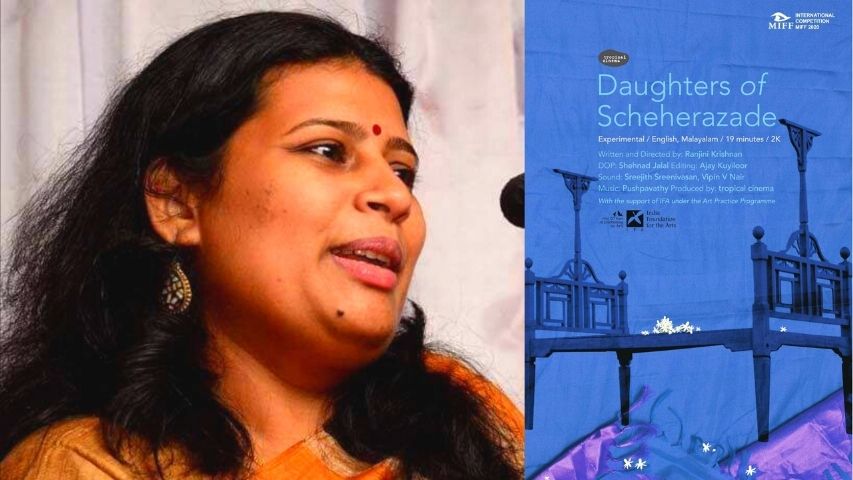 Ranjini observes that we all become masculinized spectators as our voyeuristic tendencies are delicately stoked. Conspicuous by their absence are the male voices, which are integral to this intimate theater, but their implied presence makes itself more than eloquent. Through Ranjini’s lens the bride confronts the spectator with questioning eyes, hurt, angry and a little rueful. Through the bridal makeup her queries regarding her body - mind connection become a philosophical introspection and an existential dilemma. Where does she end and he begin? What is she now, with the gift of virginity offered to the groom? Is she his or hers? Desire and fear, pleasure and pain crackle just beneath the surface of her skin.

The film tries to work out a poetics of indifference ironically through the ‘raga’ Kamavardhini to flesh out an alaap of pain. The musical score towards the end details the agony through the aching rendition of Shiv Kumar Batalvi’s lyrics by Pushpavathy Poypadathu.

Ranjini feels particularly grateful for the mutuality and rapport she shared with Pushpavathy the musician, Shehnad Jelal who cranked the camera, the sound designers, Sreejith Sreenivasan and Vipin V Nair, Ajay Kuyiloor who did the editing and the entire crew. Smitha Ambu deserves a very special mention for enacting the bride in all her fragility with commendable finesse and ease.

Daughters of Scheherazade was screened at the international competition of MIFF in February 2020 and was also selected in the Artist Cinema curated by CS Venkiteswaran as a part of Marupakkam film festival again in 2020; and it was premiered at Bangalore International Centre (BIC), as part of Past Forward festival by the India Foundation for Arts in 2019.

Interestingly, this artwork is conceived as both an installation and an independent film. And, the installation adds the gothic touch with its rather diabolical title ‘The Nuptial Chamber.’ It literally reproduces the wedding chamber where there is a centrally placed cot adorned with flowers and the LCD screen is placed next to the cot. The traditional maniyara in Malayalam is transformed into a space where the bride invites the visitor to listen in. By categorizing her film as a documentary, Ranjini avers that she is complicating our notions of reality. She plays with our understanding of representations and the very representability of certain lived experiences. 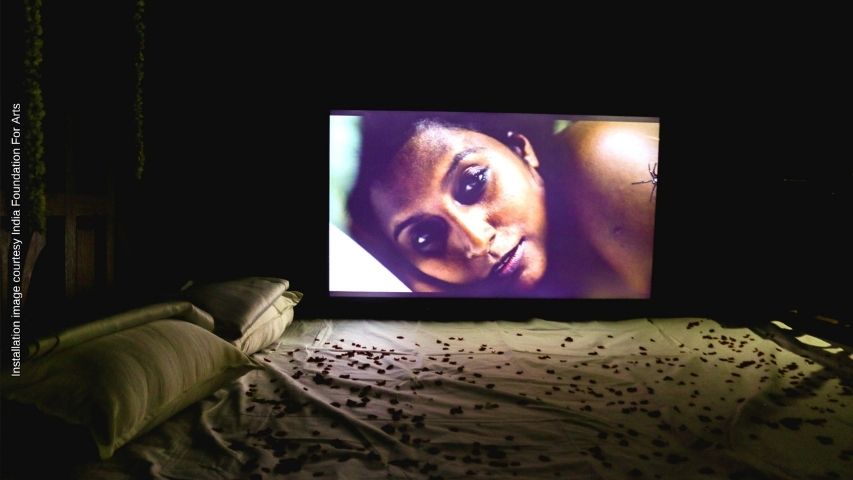 The timbre of the voiceovers evokes traces of scarred bodies, wounds trying to recover lost voices. “It is their embodied voice that gives voice to my film,” Ranjini is emphatic. From the claustrophobic interiors, the camera moves into the daylight terrace and the skies beyond where birds flit through white fluffy clouds, spelling out possibilities of freedom and open spaces. And the image of the cot out in the open bright sun marks the liberation from folds of secrecy around certain bodies and their narratives.

As a person living in a place directly hit by the recent floods, ideas on water and wetness are growing slowly within her into perhaps yet another arresting film. But then we may have to wait a while. Because when she is not making films, Ranjini is busy making organic soap, which she believes is more healing.

A person donning many hats, Ranjini would like to be known as the founder of a natural cosmetic company called Bodytree, which helps her “to flow without getting trapped in regimented spaces of academic thinking.” More power to her if in that flow she is able to offer us such pieces of stirring art!!!