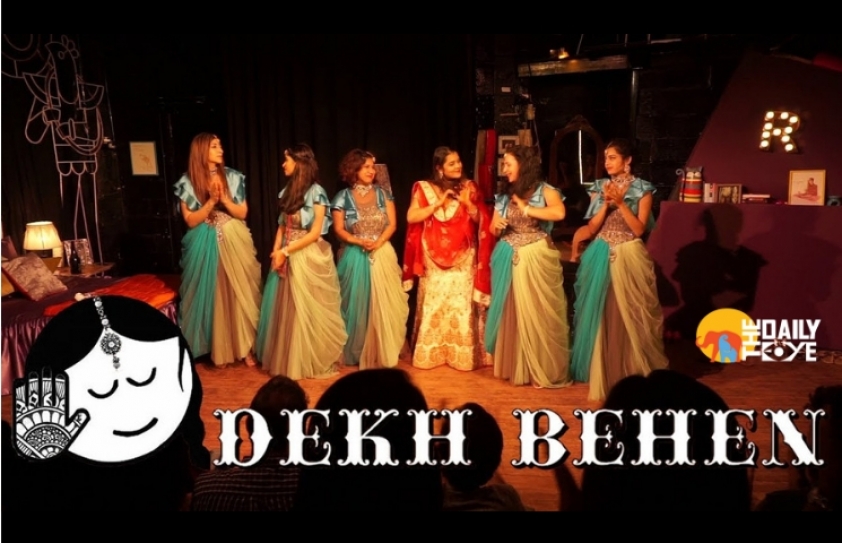 The sangeet ritual at an Indian wedding used to be a time for women to get together and sing traditional songs, away from the eyes of the menfolk. Thanks to Bollywood, and the jazzed up sangeet songs, with women and men, dressed in finery and shaking a leg, today this is just one more wedding ritual to flaunt wealth and dance to choreographed steps.

Combine this dash of tradition with the sexual openness of the Tinder era, and conversation between a group of young women attending a friend’s sangeet could lead to much ribaldry, which is what the play, Dekh Behen, captures with a frankness that would please a young audience, whose idea of boldness includes profanity and confessions of sexual adventures.

At a Delhi farmhouse, a big wedding sangeet, bridesmaids (“who has bridesmaids in India?” someone grumbles before the audience wonders), dressed in awful gowns designed by the bride, escape to an empty room to smoke pot, drink, vent and gossip. The play is bound to be amusing; it is also quite crass - when there’s no man around, women can be just as vulgar as a bunch of drunken men. 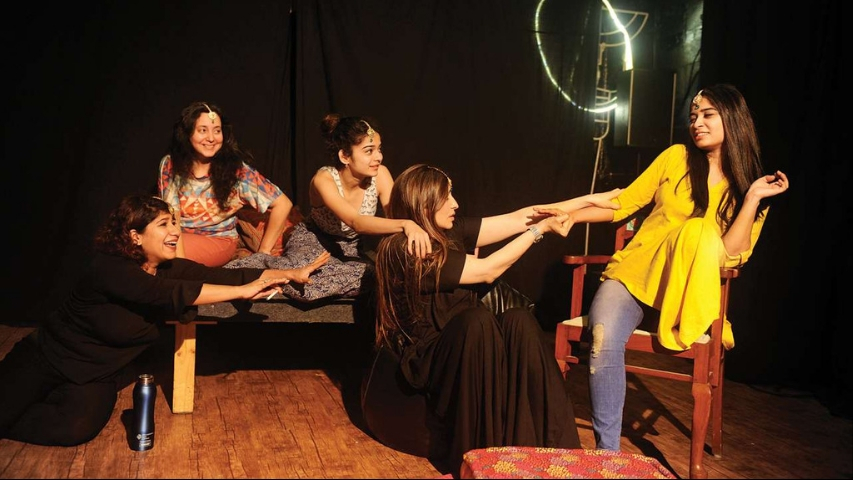 The all-women cast of Dekh behen

Dekh Behen, written by Dilshad Edibam Khurana and Tahira Nath Krishnan, directed by Shikha Talsania and Prerna Chawla, is an all-woman play (with an all-woman crew too), with sexual frustration, jealousy and marital unhappiness expressed candidly, as the madness of the ceremony goes on downstairs. The women are supposed to join the revelry at some point with an under-rehearsed item number - the scene of them trying out the steps is hilarious.

They all get drunk, stoned and increasingly shrill about the lack of nice guys.  One particular “hot guy” who is a philanderer, gets his physical attributes rated too. If an all-male play had the men talking about women in the same tone, it would have gotten slammed for sexism and crudity. For some reason the bride (Prerna Chawla) is disliked, most of all by her sister - the reason is revealed later (there is nod, probably unintended, to the classic Urdu short story Utran by Wajida Tabassum).

Dekh Behen entertains alright, but a little more depth would have helped to make it a wonderful window into the lives of contemporary women - their thoughts and aspirations. Surely, there is more to girl talk that sex, men and booze?  Still, before the crisis pops up, the conversation is deliciously bitchy and very funny. It’s only just a tad discomfiting to find that Veera di Wedding (Shikha Talsania is the common factor) turned out to be ‘contagious’.