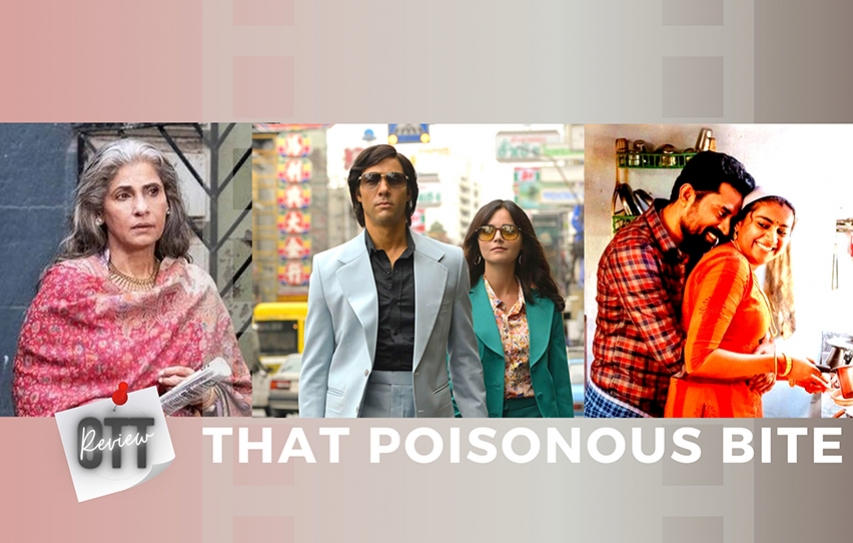 Khalid Mohamed reviews the BBC-commissioned series The Serpent on Charles Sobhraj, approves heartily of the Malayalam film The Great Indian Kitchen and is brain-bashed by Christopher Nolan’s Tenet. 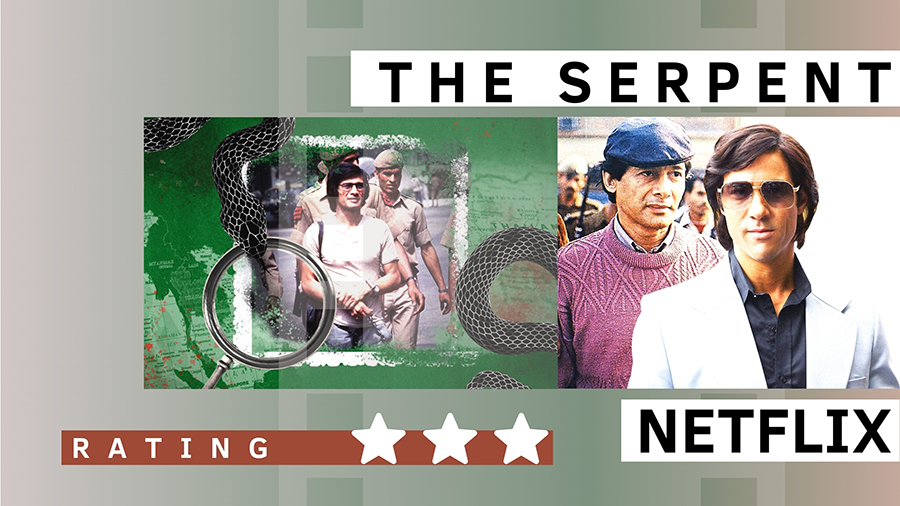 It’s for real. For no explicable rhyme or reason, true-life serial killers, brain grillers and assorted crime wrigglers, have fascinated novelists and filmmakers since time immemorial.

Inevitably, in the process there has been the inadvertent tendency to glorify them, to showcase star criminals as shrewd minds, physically attractive. And as a sub-text, there’s a wedge of psycho-babble about why they had to resort to sheer brute force on their hapless victims.

Okay, without this fascination, there would have been no accounts on the mobster Al Capone, the cannibalistic Hannibal Lecter, the stone killer Raman Raghav or Jack the Ripper to cite just three random examples.

Now add Charles Sobhraj to this league of the despicables, who’s the subject of the BBC-commissioned The Serpent, a mini-series which gets too oppressive on occasion during its eight-episode stretch. Mercifully, though in sum, Sobhraj strikes you as a devil in slick disguise - among his endless tactics, count charming gorgeous but gullible women, conning European backpackers, forging passports, besides selling drugs and gemstones as simply as if they were dental toothpaste. Waste?

Truth be told, The Serpent is excessively unsettling, unless you’re immune to watching the shocking extermination of lives, and a relentless spectacle of deceit and lies. In the event, I had to tell myself, old boy, now don’t you get squeamish. Yesterday or today, cinema or digital space can’t just offer you marzipan, mint and marshmallows. Crime has been a vital, fertile genre, so just flow with this gargoyle of a go-getter.

Directed by Tom Shankland and Hans Herbots, the plot set largely during the mid-1970s keeps shuffling its timeline as if it were a pack of cards. The non-linear narrative is distracting but by the third-episode you’re hooked, as the suave Sobhraj of Indian-Vietnamese descent prowls through the dirt streets as well as the swishy villas and hotels, by turn in Saigon, Bangkok, Bombay, New Delhi, Kathmandu and Paris. No signs of jet-lag though.

Playing Bonnie to his Clyde, girlfriend Marie is a willing accomplice and much-in-love with the man who seems to believe that he’s a legend in own lifetime. Er.. but little does dear Mademoiselle Marie know that he cares a dime for her. Already married and a father, he just has to smile and women come running to him from miles. Cool, huh?

Meanwhile a Dutch diplomat, Herman Knippenberg  has wisened up to his killing spree. Begins a cat and mouse chase. Throughout you root for the callow diplomat being obstructed by bureaucratic dos and don’ts till he almost has a 19th nervous breakdown. In fact, the prominence given to the diplomat - in terms of footage and character development, frequently dismissed as a low-rung functionary -redresses the balance of the series. It’s Herman whom you root for, and for once are disgusted by the Big Bad Guy - the one with so-called ‘negative shades’ - who could have become far more alluring to the viewer.

By the way, circa 2003, Sobhraj travelled, seemingly with a purpose to Nepal, where he could be arrested. On being spotted, he was jailed and sentenced to life imprisonment. At 76, he is still behind other kinds of bars and is believed to be in poor health. On a personal note, I will add here that I was asked to write a script on him, on the condition of snagging an interview with him in jail. The producer did make an effort but scrapped the idea since he was asked by an intermediary for a hugely unaffordable sum of money in exchange.

Back to The Serpent, technically upbeat (though a brief segment in Mumbai is lensed poorly), it does slither into your must-see radar, thanks partly to three impressive performances - French actor Tahar Rahim in the title role who doesn’t soften his darkest edges, Jenna Coleman as Marie a tough cookie whose tolerance point is stretched to the dire-st limit, and the British actor Billy Howle as the Dutch functionary-turned-overwrought-sleuth.

Although the cold-blooded crimes of Hotchand Bhawani Gurumukh Charles Sobhraj (born1944) have been chronicled already in as many as four biographies, three documentaries, not to forget Prawaal Raman’s Main aur Charles headlining Randeep Hooda, the series re-tells his story with sufficient finesse and research. And a poisonous bite - but then serpents are like that only. 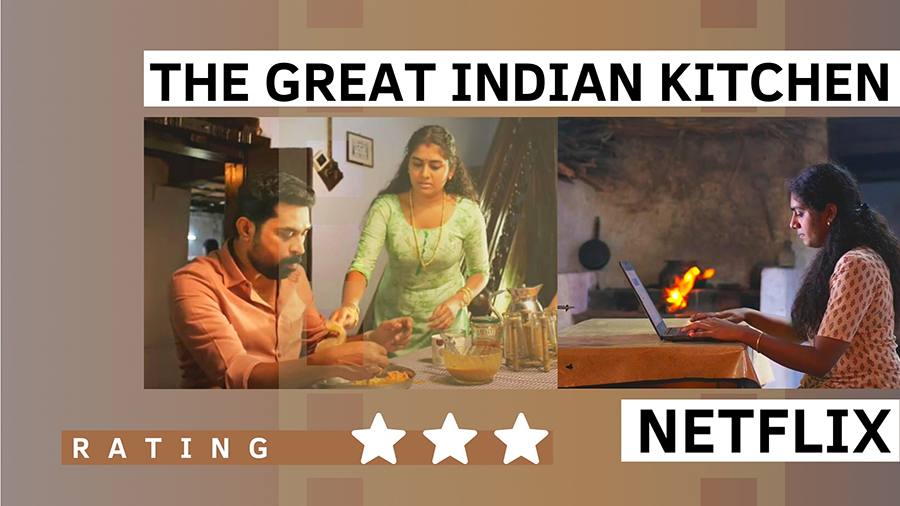 Somewhere out there around Calicut, a young housemaker finds herself in an inescapable rut. A glorified kitchen maid in an unbelievably patriarchal family, she must rustle up terrific meals, swab the floors, keep the men’s toothpaste handy, wash the dishes , turn a blind eye to her father-in-law leching over sex videos and at night, surrender to her husband’s moans and grunts in bed. Uff. A dance instructor, brought up in Bahrain, she isn’t permitted to work to become financially independent.

Moreover, when she’s menstruating, she’s confined to a pokey room, and denied a conversation with a cherubic girl of the neighbourhood. Ironically, her husband teaches the principles of an ideal family in a school, where the students stare dumbfounded.

The detailing by writer-director Jeo George of the woman’s haplessness is relentlessly harrowing, and related in a style, which doesn’t transform The Great Indian Kitchen (in Malayalam with well-worded subtitles) into a didactic petition for the independence of women. Practically every scene is treated with ultra-sensitivity - whether it’s the couple’s outing to a restaurant where the man is well-mannered, unlike his table etiquette at home or the finale that is so intensely dramatic that it gives you goose-bumps.

Unarguably, the storyline does have an element of the deja whew about it. Yet this rasoi-nama is no less than a big drop in the ocean of progressive cinema. Neither the wife nor her husband are given names, perhaps to underscore the point that such a slavish human condition within four walls can be applied universally. As performed at counterpoint by Nimisha Sajayan and Suraj Venjaramoodu, both are believable and devoid of artifice.

Here’s one kitchen, then, you need to check out to taste a bitter slice of life. 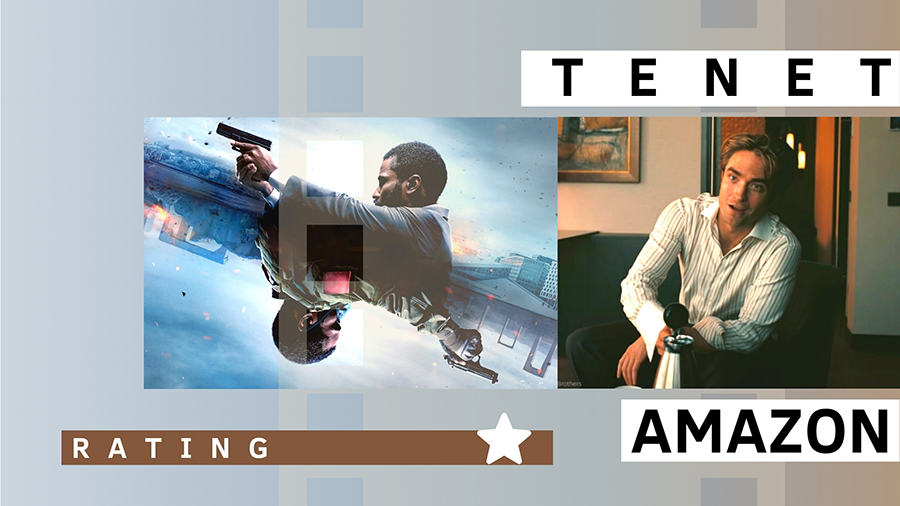 Blame it  on me. Hopelessly unacquainted with the concept of time and quantum physics, Christopher Nolanji’s much-trumpeted Tenet bounced way over my challenged head. Words like entropy, inversion and the notion of a single electron universe, struck me as mind-billowing, thus making me feel like a rudderless ship about to capsize in gobbledygook waters.

This two-and-a-half hour hocus-opus, if at all, is remarkable for its action-crammed sequences: loads of backsides of cars, trucks, schooners and what-have-you bursting into flames, which would excite Abbas-Mustaan but not moi.

And I say this at the risk of infuriating die-tough Nolan fans to which I would beg, to each his or her own, please, thank you very much. Sach.

Over to the acting crew, which is alas, nothing to rave about. John David Washington constantly carries a furrowed brow, Roger Pattinson’s blondish hair keeps tumbling over his forehead and there’s Michael Caine in a one-scene flash at an exclusive restaurant (or club) speaking  perfectly comprehensible English. Chip chip tally ho to that.

It’s Kenneth Branagh, as the Russian meanie-beanie, who is the most nuanced of them all. Aah, and what about our very dear Dimple Kapadia, as the hefty arms dealer Priya Singh? Sob. Disappointingly, she drops by in three or four scenes - including one in Oslo - and at a key juncture is shown hunching over a tower apartment’s balcony, ever so dangerously. Shudder.

As a Mumbaikar, here’s the last grouse. A scene set in the beautiful Yacht Club barely catches the old-worldly ambience there. Nolanji could have shot it at a McDonald’s outlet and it wouldn’t have made a sliver of a difference. Right, so all watched and gone brain-dead, I would conclude that for me this all-hardware-no-heartwalla Tenet turned out to be a cauldron of yawntertainment.