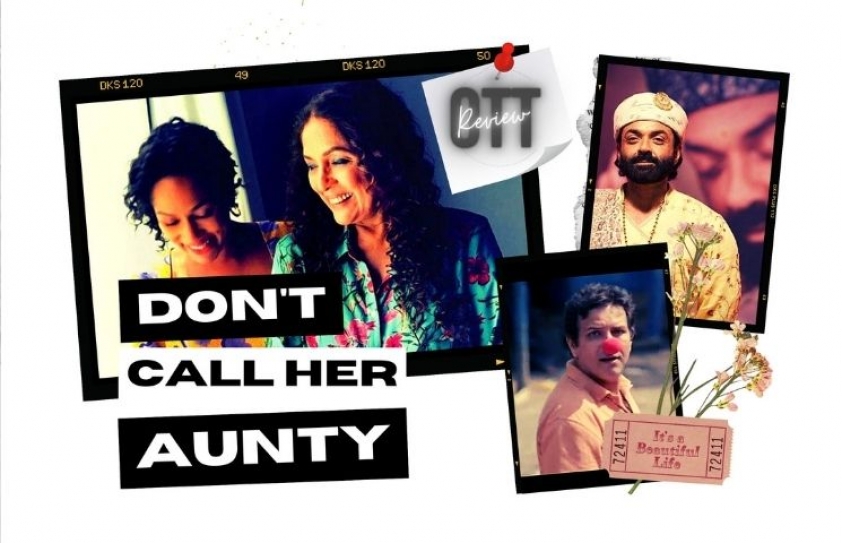 Khalid Mohamed finds relief in Masaba Masaba and other fare on the streaming channels currently.

It’s been a week of mixed pickings. The dear old prime streaming channels aren’t matching the supply with the demand in these COVID-19-stricken times – when a captive audience is guaranteed. There’s a dearth, especially of the true-blue classics, the preoccupation appears to be on rolling out the commissioned Indian content - series or original films - but then that’s the way it is.

After all, there’s this rigid market belief in catering to the millennials, who are lored to avoid black-and-white oldies or even the classiest of international films. Reading subtitles is a pain, it seems. Believe me it isn’t, try it out, it’s quite easy-peasy.

Okay so having scrawled my tuppence bit of advice, here’s your gourmand zooming into the viewable, worth-a-try servings on OTT land: 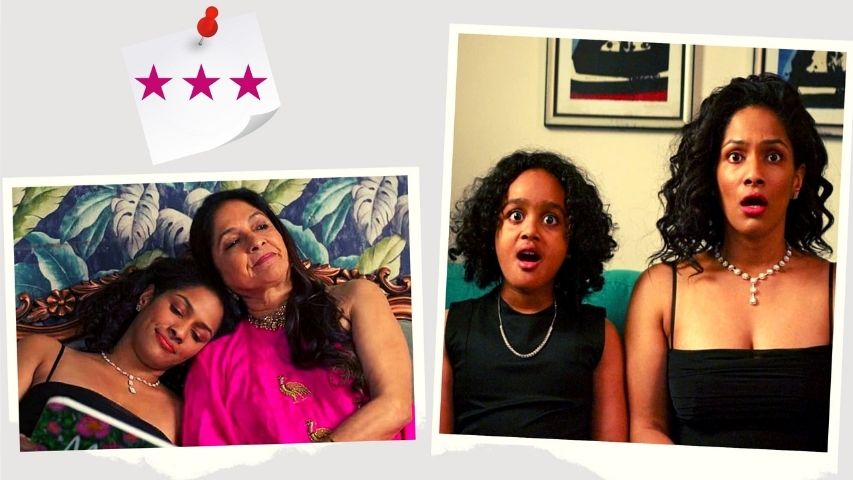 Get set for Gupta Gyan, then, or  smartistic glimpses from the yups and downs in the lives of Mom Neena (never call her Aunty, you’re warned) and Beti Masaba. One’s 61, the other’s 31 in real life, and the dramatisation of the bio-pic is commensurate with their ages mercifully.

Now unless you’re an extra-terrestrial, you’d already know Neenaji, an accomplished actor (National Award-winner it’s emphasised), at one point on an impulse wrote that she was unemployed, lived in Mumbai (not Delhi) and would like to return to the studios. Presto, the plaint on social media worked, Badhai Ho Badhai clicked and now she’s busier than a hive of bees. Meanwhile, the spunky Masaba had established a fashion line, and her designs are as out-of-the-carton as her personality. If a fash-show on a seacraft goes howlariously wrong, so what the foo!

Correctly, director Sonam Nair (who previously helmed Gippi, a so-so account of her schooldays), keeps away from plunging deep into their private lives, which are alluded to at most, subtly. The accent is rather on Masaba finding her own voice despite a domineering mother - or should that be overconcerned? - and evolving her independent identity, emotionally as well as financially.

The sequence of Ms M locating her own apartment, murmuring to herself late at night that she’s finally struck out, but then slumping on realising that she’s alone, conveys her bittersweet ‘liberation’ marvellously.

Simultaneously, Masaba’s relationship with self-absorbed men and her gung-ho besties continue to see-saw constantly. Especially sharp are the vignettes when she’s appalled at the chauvinistic cool of a man, after a brief fling, and her sincere apology to her friend Gia who’s been striving to re-open her family’s Irani restaurant. Gia’s a friend whom everyone needs, supportive but vehemently critical when it comes to a reality-check.

It’s the daughter’s characterisation which plays centre-forward in this 6-episode series. As for the mother, she sportingly strives to resurrect her acting career even though she can’t prevent herself from being a curious Mother Hen. Obviously, their bond could have come apart at the seams. But it’s heartwarming that despite their frequent bickerings, the umbilical chord can’t be broken.

Self-mocking humour and a confession of personality shortcomings are scripted and shot with a rare pyscological acuity. The slick technique (note Aditya Kapur’s jazzy photography), set décor and at least two sidebar performances by Rytasha Rathore as the bestie and child actor Amaraiah Awasthya as Masaba’s junior version seen in flashes, are extraordinary.

Neena Gupta is bankably confident as the enthu-cutlet mom. Masaba as an actor is a discovery, though performing with an outward confidence, which hides the vulnerability within.

To be sure, overall the series does wander into bylanes (uff, all the stuff and nonsense from the male archetypes) and the cut-throat competition in the fashion business is barely mentioned. No matter. Here’s a feelwarm Mom-Daughter flick that looks at their lives with rose-tinted glasses, and it works big-time. Bring on Season 2, guys. 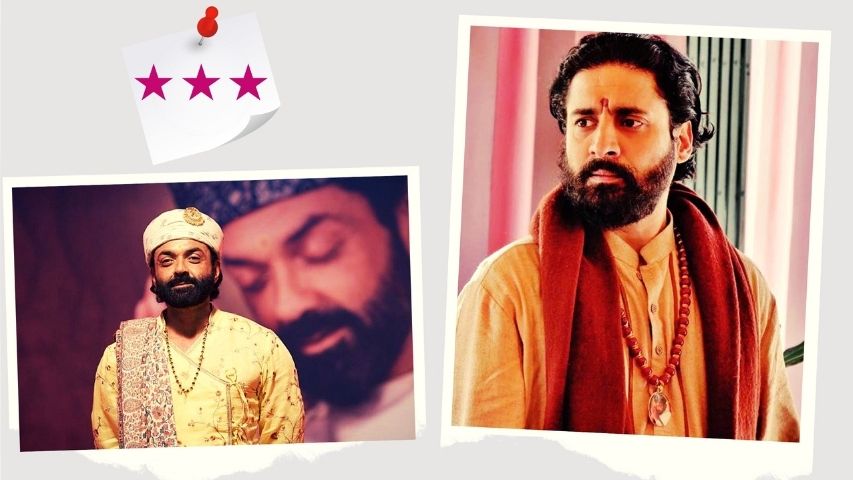 We’re back in the Prakash Jha sad-‘n’-badlands. The caste system is flaring up, gullible men are being castrated in an organ trade racket and young women are being raped and terrorised in a dungeon straight out of the Cave Ages. There’s more; a coked-out Punjabi pop singer is blackmailed to become a bhakt at the eponymous aashram in the northern township of Kashipur (fictitious, presumably), and murders are a rupee a dozen.

Presiding over this savagery is a beatific Godman – with alleged shades of Ram Rahim – who sits on a chintzy throne, suffers from nightmares and is on an ongoing drive to keep politicians, the lawforce and any other irritants in his pocket like loose change.

Jha’s patented convoys of cars driving through the streets, a highway and thick jungles are mandatory, naturally. For a twist of titillation, three-to-four elaborate sex scenes are packed in at regular intervals, just in case you thought the Godman and his cohorts were strictly vegetarian.

All deja consumed, no? Yet to your infinite surprise Jha is in form, working from a story by Habib Faisal (most famously known as director of Do Dooni Char and Ishaqzaade). The authenticity and the details, which must have entailed piles of research, do ring true. Indeed, the 9-episode series is hard-hitting and engrossing (though I wouldn’t recommend a binge, maybe see two at a time). And it’s yet another reminder that in the name of faith, rituals and religion, thousands of people - even the literate and successful businessmen -  are reduced to the status of bonded labour.

Style-wise, Jha sticks to the rough and ready, in accordance with the theme. And he maintains his knack of staging crowd scenes expertly. Of the cast, Bobby Deol’s huge portraits on every feasible wall are seen more than him in person. Playing against type though, Deol opts for restraint and for once, uses his eyes eloquently.

Of the supporting ensemble, Chandan Roy Sanyal as his chief henchman Bhopu, is the scene-stealer. He’s nuanced and believable throughout. Plus, Anupriya Goenka is impressive as a forensic science specialist.The darkish crime thriller ends abruptly, not without darting excerpts from more of the mayhem to come in the next season. Here’s hoping that those recurring convoys of cars are edited to the bare minimum. 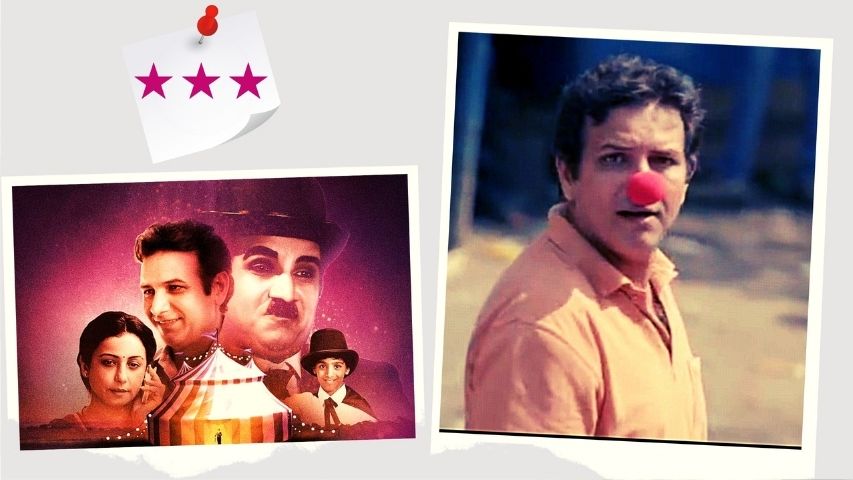 The little jewel of a film directed by Nitin Kakkar (whose bio includes Notebook, Filmistan) may be packed with tropes - after all when a travelling circus folds up, its crowd-pleasing joker is bound to discover that life’s no garden of roses.

Forced to support his wife and son, he becomes a human rickshaw on the Kolkata streets. And if he lands a freelance assignment, it’s to dress up as a jumbo chicken and almost choke to death under his outlandish costume.

Paying homage to the artistry of Charlie Chaplin and Raj Kapoor, and even to Balraj Sahni’s plight in Do Bigha Zameen, the storyline is remarkable for suggesting that there will be light at the end of the longest tunnel.

Indeed, here’s a work of smiles and tears that is elevated especially by the lead performances. Kumud Mishra’s resilient smiles and his mood swings from depression to hope are outstandingly rendered. The undervalued Divya Dutta keeps pace with him throughout, delivering an uber sensitive performance, which stays with you. Miss our Kolkata ka Charlie at your own peril.