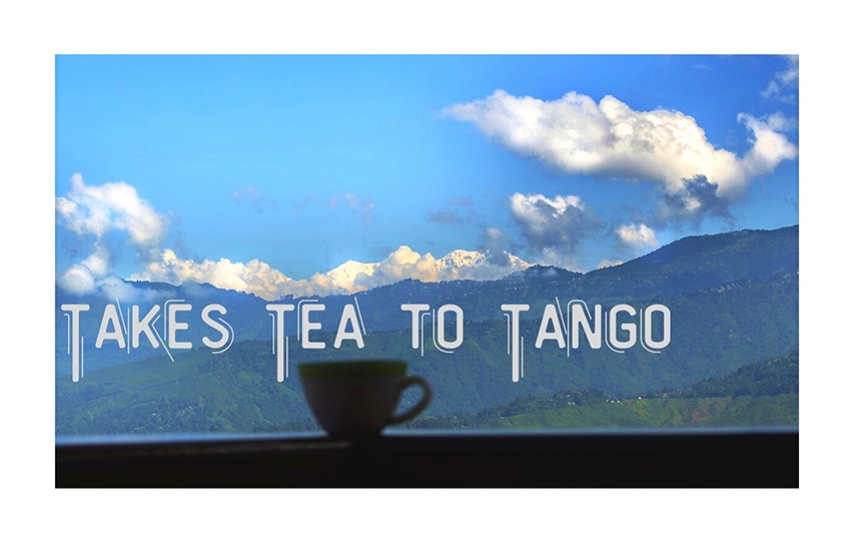 A photo-essay by Ashis Ghatak on his tea-tasting spree in the Darjeeling hills.

Sitting in the cozy glass-walled empty restaurant on the terrace of Cochrane Palace, when the fog was gradually encapsulating me as a woman wrapping me all around with her bewitching embrace, I ordered a cup of second flush.

With the stereo playing Leonard Cohen’s So Long Marianne, and the fog descending on the lamps and the distant hills, the tea was getting deeper in the mind.  Every sip of second flush leaves a delicious aftertaste.

My inebriating caffeinated tongue was pushing me inward.

A few years ago in the restaurant of Rokeby Manor of Landour, I had seen a wall with graffiti, “Life is a cup of tea. The taste is all up to how you make it”. True. I found how deeply profound that is. Tea is the most pertinent metaphor of life. Every sip of tea embraces every moment. Every sip trickles down deeper within, filling up each moment with a sense of completeness. The cultivars or the variety of tea leaves that make the most of the climate and the rain-washed soil of the Darjeeling hills, are a buffet of sense and sensibility.

A lanky and smiling boy came up with the proposal of tea-tasting. Winter evenings on the outskirts of Kurseong town remain a little droopy and drowsy. Most of the hotels remain unoccupied. Roads are also near empty with villagers huddling over burning logs of woods at the corner of the street. Dogs and people coil together. Fogs camp on them. I pierce through the cloud and occupy a separate corner in that tea bar. 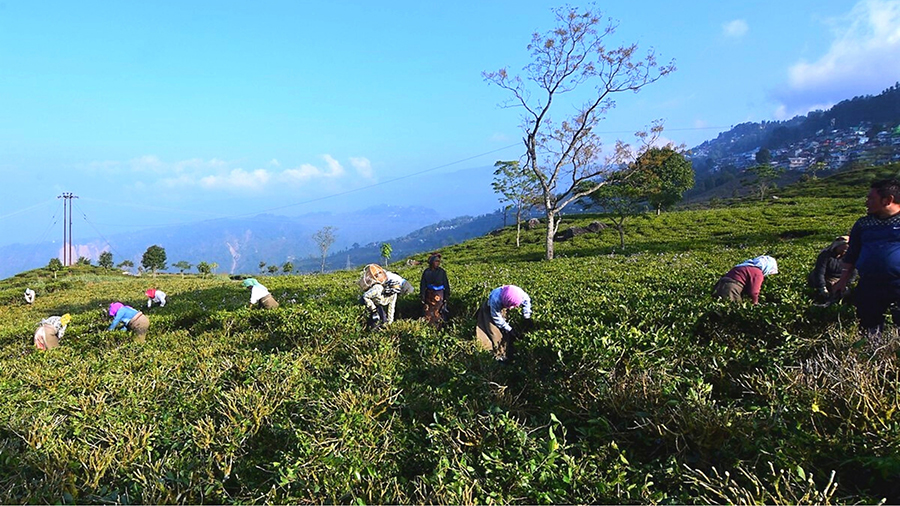 The boy’s offer was too tempting to resist. In tumblers of different shapes and sizes he served me tea, one after another. Like Dev Anand soliloquising his dreams of making a home, looking at his lady love Nutan, smiling from inside the glass of his drinks, I found an elfin of Darjeeling fluttering her wings inside the tumblers of tea. Darjeeling tea, with its widest variety, offers a huge range of emotions. It is not just a drink, never as cheap as an opium for compulsive addicts. Darjeeling tea with all its variants, are the raga of life and the undying companion during the inane rounds of hours.

The first tea served to me in a small thin miniature glass tumbler was Marrakech green tea. Green tea is the latest fad, which has  found fame for being therapeutic more than ever before. But the cheaper variety of green tea and the sacrilegious tea bags rob all its charms. Overbrewing takes away the delicate astringent taste and turns it bitter. But the sunset yellow tint of Marrakech green tea with its mint flavour acts as an appetiser for a sumptuous continental buffet spread. The cool and lightness of unoxidized leaves a rich sense of grassy and nutty feel in the tongue.

I am not a great patron of flavoured tea, I always have my nose up in the air, when a waiter suggests adding flavors in my tea. Even a spoon of sugar or milk is blasphemy to the nectar that Darjeeling tea is. But that evening I allowed myself to be pampered with flavoured tea as well. The grassy, nutty feel of Darjeeling Singalila green tea appeals to sophisticated palates. The very flavour hit me as the cup approached my lips. Usually anything short of a big tumbler of tea is not enough for me. But this tea gives one a kick when taken in moderate measures. Flavour plays an important role. Just to savour this you need time between two sips. A winter trip to the Darjeeling hills with no thoughts of early morning alarm bells is perfect for this. This slows down the pace around you, allowing you to observe how moments pass instead of getting carried away mindlessly. 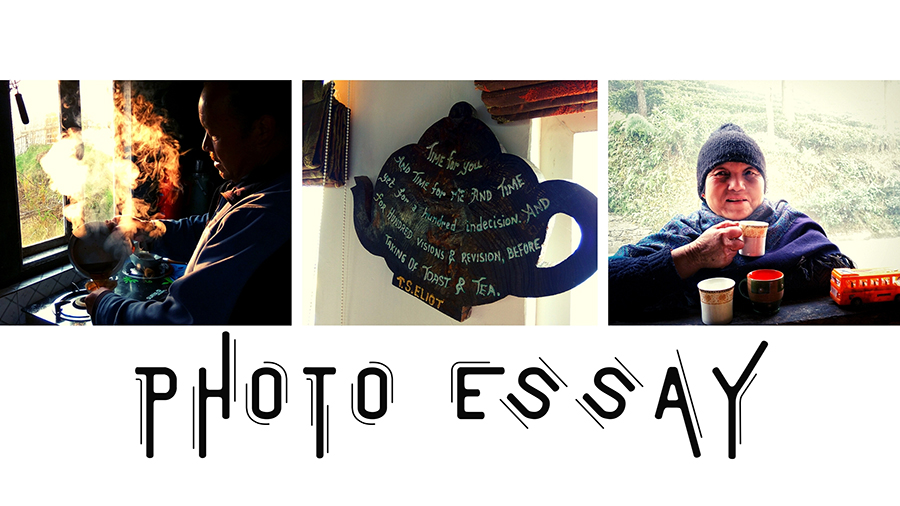 Two rare varieties of flavoured white tea came in tandem. The delicate white tea with its rarefied varieties has an unapproachability of a high-heeled lady who carries with her a whiff of elegance. The nightingale white tea with jasmine and blue pea flavor is exceptional in its looks. The colour comes out as purplish blue. The flavour that fills the air around me reminds me of all good things in life. The fragrance can be compared with someone sitting in a bower and soaking the aroma. Such a delicate drink needs to be served in proper fine glassware in front of elated companions. Holding the glass will then be holding the thin waist of a svelte and letting your fantasy rule over reality. The tea gives you a royal feeling of sipping champagne.

This is all about a feeling which has nothing to do with pandering to the need of a conditioned mind. It is a rare gateway to fancy. I felt the same way when they served me wine-coloured Birdsong white tea with lavender and cockscomb flavour. The floral fragrance left a sweet lingering aftertaste. I love the smell of the soaked white tea leaves when the liquor is strained and poured in a cup. This should be the drink to start an idyllic day in the mountains. In the same league, there is caffeine-free Chamomile tea. The lemon grass flavoured Chamomile tasted like sweetened warm water. Caffeine-free tea sounds antithetical. And this is not much of a tea thing either.  I found this tea could best be cherished as the perfect dessert after a hearty meal. 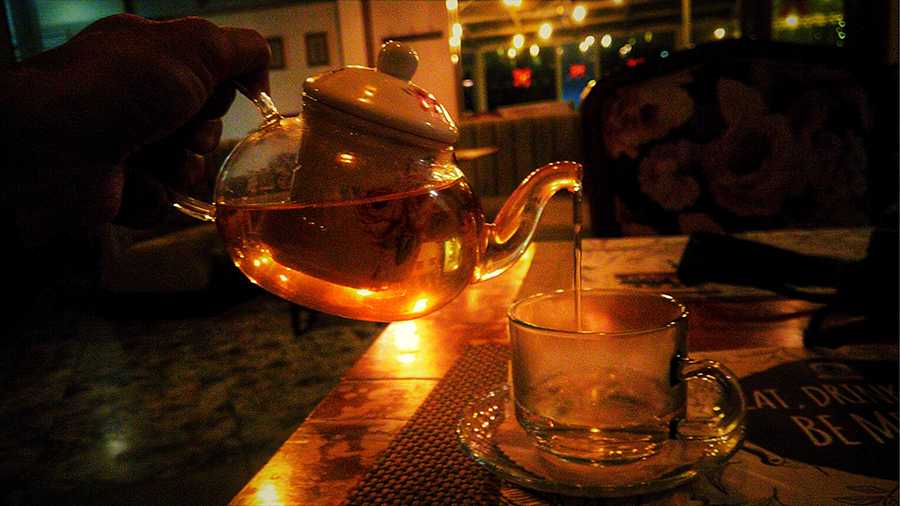 Oolong tea perhaps  has the widest of variation because some oolongs are oxidized 10 per cent to acquire a lighter and finer taste and some oolongs are oxidized for more than 70 per cent to get a stronger and bolder taste; blurring the differences from the standard second flush muscatel. But what is pretty interesting is the shape of oolong tea leaves. As they are mostly hand-rolled they come in various shapes ranging from the normal bigger single strands to  the most unlikely looks of round balls.

And premium oolong can be brewed multiple times to go from a strong one to a milder flavour. I was served Seville Mandarin Orange Oolong. I found the clove adding to the inherent strong flavour of the leaves. For one who loves roasted tea to get a relief from tiredness, this oolong is a richer, costlier and a more sophisticated variant. But it needs skill and expertise to brew it to get the intended taste. The huge dragon-like looks of the soaked oolong tea leaves is unique and the smell that wafts out of it instinctively brings a feel-good sense.

Darjeeling’s second flush is the most sought-after tea. For me the strong, caramel colour of the liquor with its rich and sweet fruity flavour is unbeatable. It invigorates me after a hard day’s slog. The monsoon in the slopes lends to it a rich flavour and the oxidation adds an irresistible color. The flavoured fume that curls up from the cup unfurls the magic of a genie casting a spell. With its colour, taste, naturally rich flavour and a great aftertaste, Darjeeling’s second flush is a sensory experience, any time and any number of times a day. Above all, for me the crown of cultivars belongs to Darjeeling first flush. As someone says, poetry doesn’t mean, but is. As the beauty of a song doesn’t need any pedantic analysis, my love for first flush goes beyond any logical analysis. 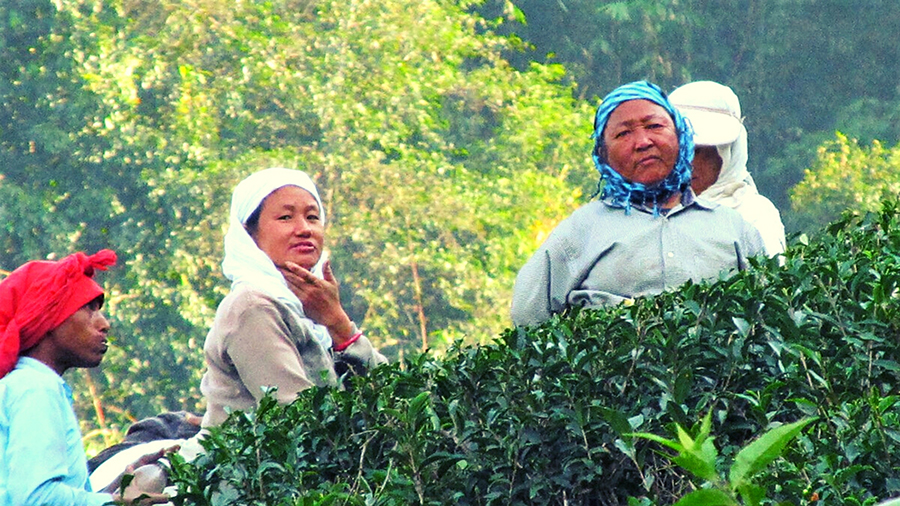 The light mellowed yellow colour and the grassy earthy flavor is heady. The mild astringency of the super-fine first flush might be a deterrent to a normal tea addict. But that is what attracts me to pass endless hours with a big tumbler of first flush. I deliberately kept the first flush for the end because I am a little biased with this wonder creation of nature.

Here also one has to take longer intervals between two sips to savour the aftertaste, which wins hands down over any other variant. As the elixir goes down the throat, it leaves me in a state of heightened mindfulness. It needs silence and your own space far away from the mundaneness of life. It needs the freedom of staying back some time more after the last sip  and not just emptying the cup before rushing out. For that any other variety might be okay but the first flush should wait for your time. It needs care and proper attention about how it gets your time.

The manicured waves of Camellia Sinensis spreading over acres of undulating slopes, greets you once you journey up from the plains to the mountains of Darjeeling. Women wearing colourful dresses while stooping over the plants don’t just pluck leaves for their paltry daily wages. Quite unknowingly, they open up a lane for our mind to cull some of the rarest pleasures of life.