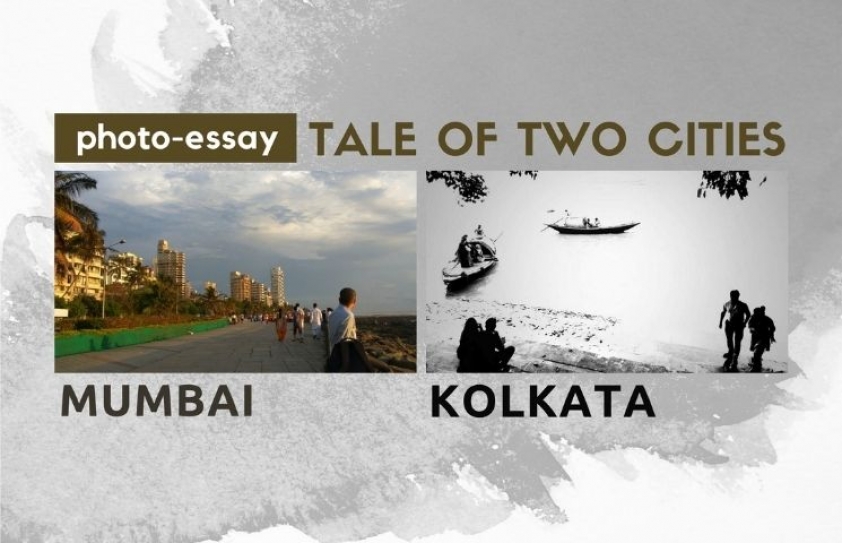 A photo-essay by Ashish Ghatak on the striking parallels between Mumbai and his hometown Kolkata.

The sun was about to  set. The purple sky was gradually dotted with neon bulbs from the windows of the sky-piercing towers. Mumbai was bathed in the sun’s golden light. The Bandra Bandstand on a sultry summer was almost nondescript barely an hour ago.

The empty strand began to fill up with food stalls, ferrying corn and stands of chuskis or the colourful ice gola. Suddenly the place seemed to have come under a vast sycamore. Cohorts of youngsters came in numbers, perched themselves on the rocks where the gushing waves of the Arabian Sea leave a trail of salty water drops. The gorgeous sea-line glittered. Mumbai's nightlife  was ushered in.

Some youths gathered at the gate of Mannat to catch a glimpse of Shah Rukh Khan. Some hip boys and girls planned to let their hair down at an upscale night club. A vivacious  musician was quite a bass sensation there, they had heard. The night club has that ambience for  teenagers eager to scream their lungs out. The bluesy glow of soft light and the tremoring silhouettes of the rocksters, the heady cocktail of music, drinks and food help to beat the summer blues. 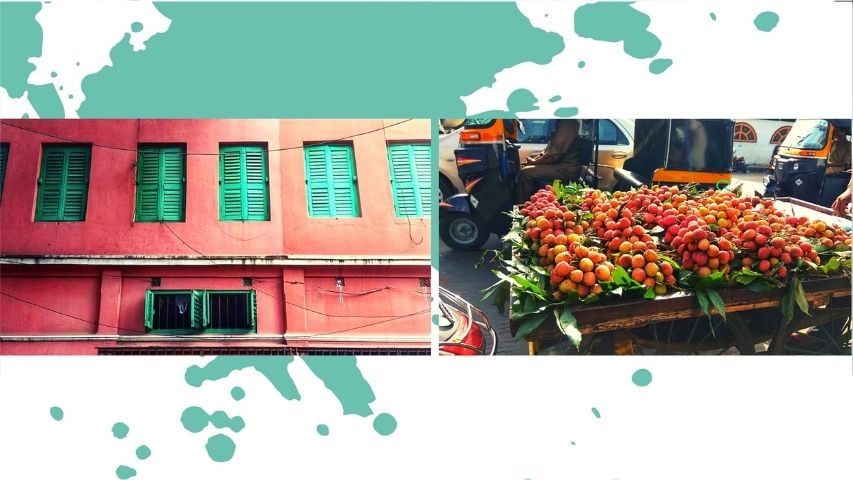 For an inveterate Kolkatan, this zest for life is reminiscent of his own city. Like Mumbai which is girdled by the coast of the Arabian Sea,  the strand of Calcutta is ringed by the omnipresent Ganga offering a much-desired getaway from the inane pace of life. But in Mumbai, as the evening lights start twinkling in a year-long Diwali, the very opulence of the landscape resembles the glitzy skyline of New York’s Manhattan. Mumbai has an innate youthfulness that touches almost everyone who comes here. For a Kolkatan there is an instant connection.

The thread that binds the two mahanagars is food, more specifically street food. I’ve had endless debates with my friends - which city has more alluring buffet spreads on the sidewalks and street corners? It would be  a humdinger of a finish if the two were up for a race. Be that as it may, the streets emitting the spicy aroma of pav bhaji reminded me of my own city and how the little tangier golgappa throws down the gauntlet to my hot favourite puchka, which I playfully think as the "panacea to all gastrointestinal diseases". 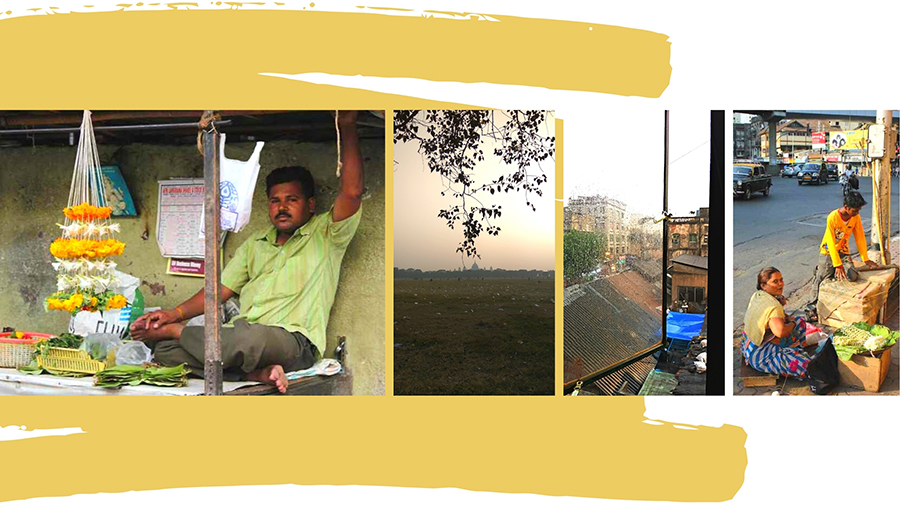 Next, a casual get-together at Marine Drive and the aftertaste of lip-smacking tamarind sauce of a sumptuous bhel puri or the Mumbai-style mashed potato pokara named as batata vada, are perfect West Indian counterparts to Kolkata’s spicy puffed rice or potato chops. A glass of cutting chai from a tapti pampers my eternal liaison with tea, only the clay cup of Kolkata has a certain edge.

But it’s the sandwiches at the pavement near Mahalaxmi which are a visual delight. Can anyone think of any other fusion food than an assortment of shredded cheese, even fried samosas, thick pineapple slices and colourful salads layered inside the buttered bread slices and finally the grilled triangular pieces criss-crossed with red tomato sauce and green chillies coriander chutney? 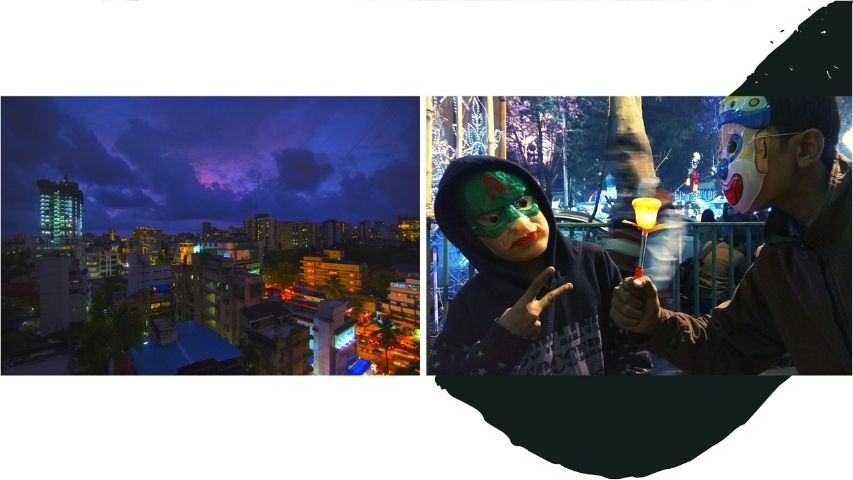 Mumbai, the City of Dreams is irresistibly cinematic - perhaps because of the images from Basu Chatterjee’s oeuvre of films stored in my mind.  Another Bong connection. On the ledges beside the bay, lovers look hazy in rain. Could I then spot a tall and lanky gentleman in a black suit courting an exuberant sari clad lady, drenched in rain to the music of R.D. Burman? All those places, where Amitabh Bachchan and Moushumi Chatterjee romped on Marine Drive and the streets where rain water swirled from the wheels of red BEST buses, came alive again. No wonder the first monsoon downpour inevitably recalls the  images of Rim Jhim Gire Sawan from Basuda’s Manzil (1979).

The city itself is a moving canvas. Walking on Nariman Point I would invariably search for the  Vijay  of Yash Chopra’s Deewaar (1975) standing at the huge glass window of Davar saab's office overlooking the busy road ruminating his own rags to riches story of a shoeshine boy on the way to become the underworld don with the unflinching principle of "Main kabhi bhi pheken huye paisa nahi leta". 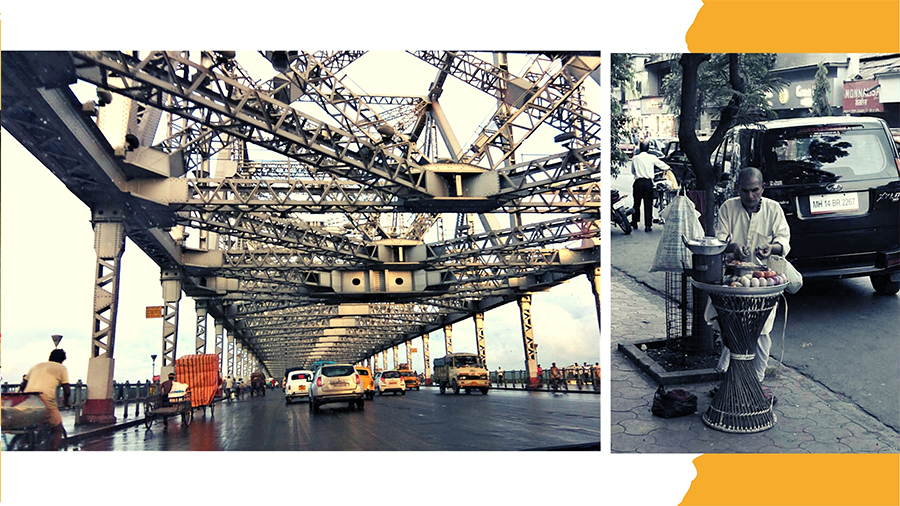 And perhaps what makes these two cities happy partners of crime are the infamous traffic jams. When my cabby stares at the prolonged countdown of the stoppage time at the signal, I see an Audi or Porsche which halts next to us. The signal turns green and the race resumes. Everything zooms through.

Despite life running in fast track, it has a throbbing heart, a beat much familiar to someone from Kolkata. Here also, like my city, everything doesn't aim for a utilitarian end. There's life just for the simple pleasure of living it. Perhaps at this point, I would prefer to be at  Chayos or  Starbucks to engage in chats on music and films.

Yet lazing alone at the Bandra Bandstand, with nothing to look up to but a setting sun, adds meaning to an empty evening My own city also abounds in cozy nooks. Truly, Mumbai and Kolkata are two sides of one same coin.