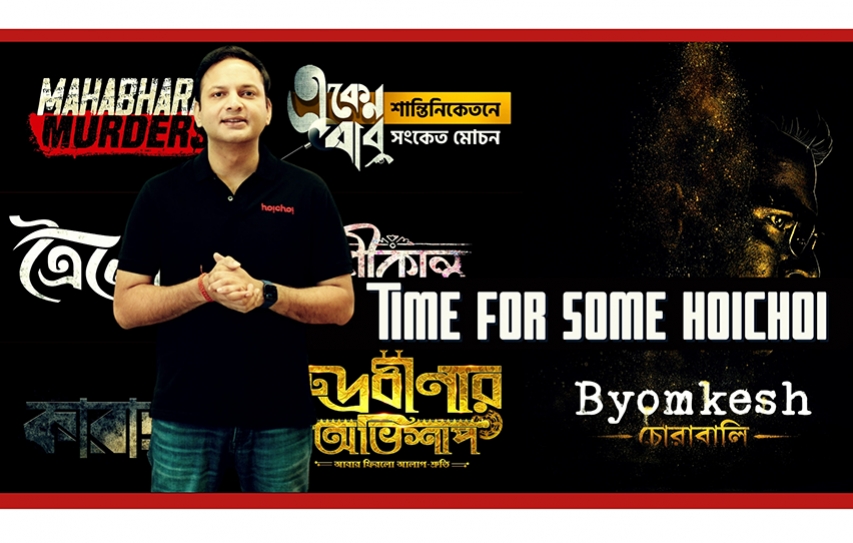 Starting out in 2017, the first regional OTT player in India, hoichoi, is now the world’s leading Bengali OTT platform. As it steps into its fifth year, co-founder Vishnu Mohta, who is also the executive director of SVF, speaks to Shantanu Ray Chaudhuri on the journey so far and the road ahead…

It’s by every token a potentially mouth-watering treat for viewers. Celebrating its fifth birthday, hoichoi has a ‘stream’ of goodies lined up for its viewers. While old favorites like Byomkesh and Eken Babu continue their successful run, the upcoming fifth season has a slew of originals directed by the who’s who of the industry, including Srijit Mukherji who brings Bengal’s most loved detective to the platform in 2022. After the well-done and extremely well received series Murder in the Hills, Anjan Dutt returns with a new series, Khyapa Shohor, set in the city’s underbelly.

Among the most interesting projects coming up is Anirban Bhattacharya’s adaptation of Macbeth, Mandaar, under a new series on world classics. Dhrubo Banerjee’s deliciously titled Tiktiki pits two of the finest contemporary actors in the industry, Anirban Bhattacharya and Kaushik Ganguly. Then there’s the hugely intriguing Troilokkyo, a series based on India’s first recorded serial killer, that too a Bengali woman! There’s also the prospect of watching Ritwik Chakraborty as a detective in his debut in the OTT space with Sahana Dutta’s Gora.

The icing on the cake - five shows from Bangladesh: Boli (based on the legend of Rustom and Shohrab), Karagar (Syed Ahmed Shawki’s thrilling follow-up to Taqdeer), Sabrina (Ashfaque Nipun’s return to the hoichoi fold after the celebrated Mohanagar), the detective series Kaiser, and Bodh (directed by Amitabh Reza Chowdhury, whose Dhaka Metro remains one of the finest shows to have aired on hoichoi).

Excerpts from the conversation: 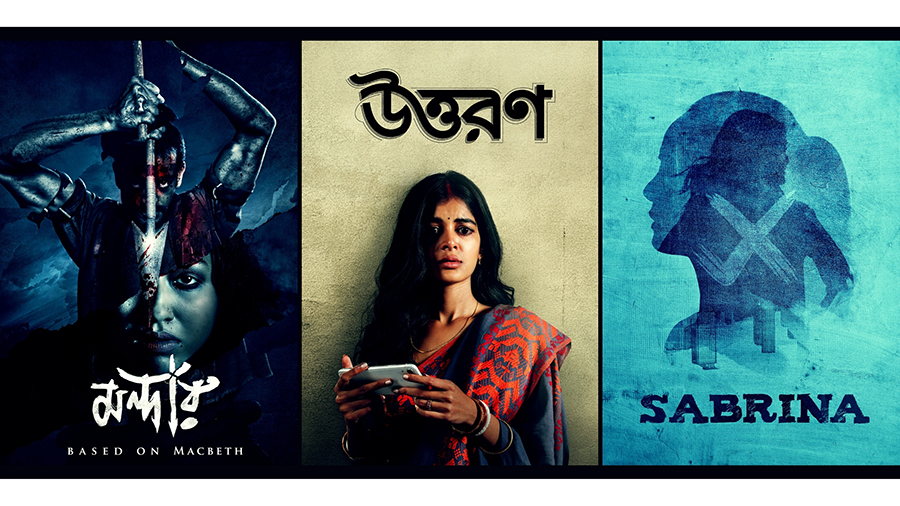 A snapshot of the journey, the challenges, the achievements…

hoichoi launched in 2017. The Indian OTT space was very nascent at the time with only a handful of players. hoichoi became the first regional OTT player in the country. No one was sure what the OTT landscape would look like. Everyone was still debating on whether AVOD or SVOD was the right business model. We took a decision to focus on a subscription-based model, which provided no free trial and had no monthly plan unlike what other players at that time were doing. We launched with a 3-month, 6-month, and a 12-month plan.

Initially, hoichoi was aimed at being a movies-only platform but right before the launch we wanted to try out a few original shows. These shows drove great numbers and became one of the biggest reasons why our users subscribe. As such originals became a clear focused strategy going forward.

Over the last four years, the key strategy phases that proved to be successful have been (i) no free trial or monthly subscription plan (since the recurring payment ecosystem in India is still at a very nascent stage), (ii) investing on original shows at a very early stage of the entire OTT landscape in India, (iii) bringing forward the concept of world premiere movies (movies that release after theatrical and before broadcast), (iv) focusing on only annual subscription plan to drive numbers, (iv) creating a new revenue model by dubbing our original shows in Hindi, (v) launching in Bangladesh and creating content with their biggest makers and talents, (vi) deciding to stop licensing of Bengali originals and focusing on driving direct subscriptions and (vii) focusing on key strategic subscription bundling partnerships to drive reach and volume.

These past few years have been very rewarding. In 2019 we crossed 50+ originals and by 2021 end we are aiming towards presenting 100+ originals. Presently we have 80+ shows on the platform and over 600 movies including world premieres, classics and blockbusters. hoichoi has also seen 4X growth in its overall watch-time since last year, not only in India but also in Bangladesh.

There are challenges. The entire ecosystem is still at its early stage and every day is a new learning for us. The recurring payment ecosystem and also the penetration of digital payments in Tier II and III cities remain a big challenge. 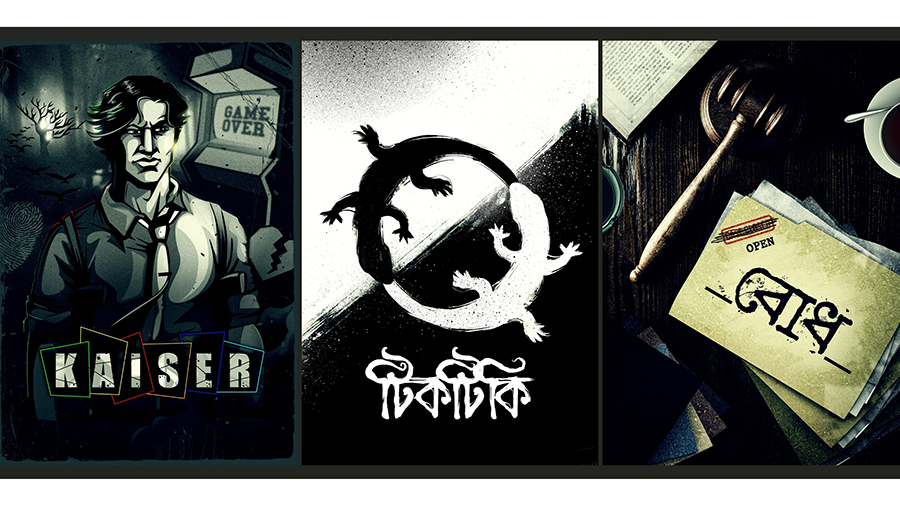 Five years - big gains and things you would do differently?

Our audience base has been one of the biggest support systems and thanks to them we have had some remarkable achievements. In 2017, we launched with five originals: Hello, Byomkesh, Paap, Dupur Thakurpo and Cartoon, and a content library of 500+ Bengali movies. In 2018, we decided to revamp our interface and make it bilingual, presenting a dual interface in Bengali and English so that people can access hoichoi in preferred languages. We also introduced the concept of audio streaming on hoichoi, which consists of 1000+ songs. In Year 3, we started venturing to international markets and focused on expansion through introducing telecom partners. We launched hoichoi in Bangladesh, officially, with our office established there, launched local payments, and began working with local talents and creators in Bangladesh. That has gained us huge appreciation from people in Bangladesh.

We have also had a great response after we introduced our dubbed content section and that is why we are expanding our dubbed content in more Indian languages. In the fourth year of hoichoi, we introduced the idea of local payment, which has worked really well for us. The idea behind this was to make hoichoi available to people in Tier II and Tier III cities where online payments are difficult, and thus provide people with a payment method that they are comfortable with.

We have experimented at every stage to bring forward what our users love. The biggest gain is that hoichoi has become the entertainment destination of choice for most Bengalis, not only in India but also in Bangladesh and in other countries. The Bengali diaspora growth has been phenomenal and today international direct subscription contributes over 30 percent of the overall direct subscription revenue. As we are still experimenting and identifying new ways to bring forward the best content, it’s early to comment on doing things differently.

We began our Hindi dubbed originals in 2018 and through this we figured out a new revenue stream. This enabled us to reach out to a wider audience base across the country. hoichoi does not license any of its original shows but dubbing the content in other languages enables us to license the dubbed catalog which does extremely well on other partner platforms, drives huge viewership and has a cult fan following of its own. Also, hoichoi currently has over 80 originals and out of that at least 70 are available in Hindi as well. This is one of the largest catalogs of content for many Hindi OTT players in the country.

The most important thing about our dubbed titles is that we treat them as a new content. We redesign the presentation, which includes the subtitles, trailers, songs and posters so that the look and feel is that of a completely new original title. The response that we have received for our Hindi dubbed content has also motivated us to dub content in other Indian languages like Tamil, Telugu and Malayalam. We have also seen interest from a lot of players around dubbing our content into these languages. In the next few months, we will be going ahead with the same.

On addressing the criticism of the web series content in a number of forums.

The audience base for any content is diverse in nature and with that comes a wide array of people who will like a certain type of content and some who will not. Therefore, along with criticisms there has also been great feedback that Bengali series content has been receiving. As a platform our job is to create content that is liked by all and in the next few years, we want keep creating impactful content that creates a connect with the audience. 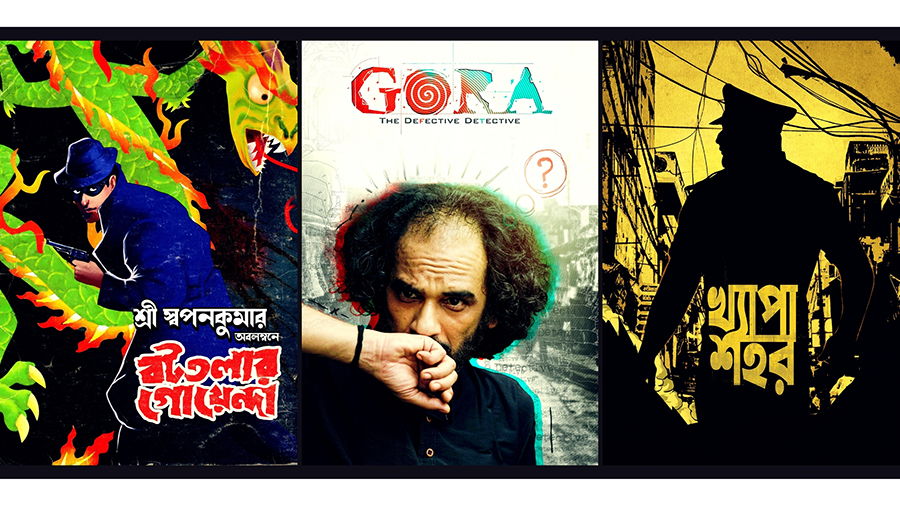 The big challenges/opportunities in the next five years…

The key opportunities or focus areas for the next five years will be in content. Create content that is relatable and has great potential in terms of story or concept. Cultivate a pool of creators, talents, writers, technicians and producers in both India and Bangladesh. Bring forward the best world premiere movies on a frequent basis on the platform.

We are also focused on distribution and international markets. This calls for strategic bundling partnerships across telecom, ISPs, e-commerce in both India and Bangladesh. We aim to deepen focus on Middle East and South East Asian markets through direct carrier billing partnerships with key telecoms and offer local payments. We plan to deep dive on creating content in Bangladesh by their local creators. Finally, we want to reach out to Tier II and III cities by offering offline payments through direct and retail partnerships.

“My heartiest congratulations to hoichoi. Just like the last few years this year also two of my projects are set to release on hoichoi: Rudrobinar Obhishaap and Uttaran. I hope the audience will love our new projects as they have done our content in the past. I wish hoichoi all the luck as it begins its journey for Year 5.” – Joydeep Mukherjee

“I feel immensely happy as hoichoi steps into its fifth year. I consider myself really lucky and honored to have been closely associated with hoichoi over these past years. Season 5 is going to be really special for me as two of my most important directorial ventures, Byomkesh Season 7 and Mahabharat Murders are in the pipeline. Two more projects of mine as a DOP, Mandaar and Srikanto, are also being revealed in the fifth season of hoichoi.” – Soumik Halder

“hoichoi has become a family to me and holds a major place in both my life and career. This is the place where I started out as Byomkesh, and went on to be a part of prominent projects like Laboratory, Manbhanjan, Panch Phoron, Detective and REKKA. In this fifth season, four of my works are to be released on hoichoi. I am making my first debut series, Mandaar, as a director. I will also be directing Swapan Kumar Obolombone Bottolar Goyenda. I am also a part of Dhrubo Banerjee’s Tiktiki and am presenting the seventh installment of Byomkesh. So, it is hoichoi that takes my work to Bengalis residing around the world.” – Anirban Bhattacharya

“It is a double celebration, first, as hoichoi steps into its fifth season and, second, I am once again collaborating with hoichoi for another interesting web series. After the success of Murder in the Hills, I am very excited to join hands with hoichoi for Khyapa Shohor, a series that revolves around a conflicted perception of Good Cop-Bad Cop presented from the city’s underbelly. So, congratulations to hoichoi on its fifth season and may we keep making great content together.” – Anjan Dutt

“What an incredible moment to announce my first-ever web series, Tiktiki. hoichoi has become a household name in these four years and I am elated that my debut web series is being announced as hoichoi marks the beginning of its fifth year. Tiktiki is a passion project for me and will cast two of the most phenomenal contemporary actors, Kaushik Ganguly and Anirban Bhattacharya. Heartiest congratulations to hoichoi.” – Dhrubo Banerjee