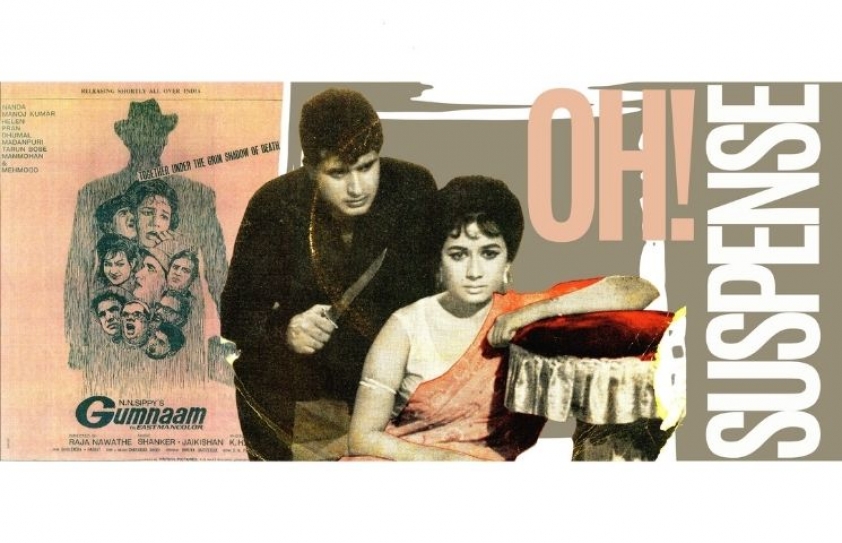 The reputed producer N.N. Sippy’s Gumnaam (1965) directed by Raja Nawathe is one of the finest suspense thrillers of Hindi cinema. It was an adaptation of one of Agatha Christie’s most-read novels - And Then There Were None. By the way, the prolific British web spinner’s (1896-1976) books have been inspirations for various Indian films in multiple languages like Chupi Chupi Aashey (Bengali 1960), Dhund (Hindi 1973), Shubho Mahurat (Bengali 2013), Grandmaster (Malayalam 2012) and Chorabali (Bengali 2016).

The kick-off points are two killings. One is of businessman Seth Sohanlal who’s run over by a car outside Hotel Metropole and the second of a Mr. Khanna who had seemingly orchestrated the murder. As Khanna, who’s been talking over the phone, is killed, droplets of blood drip on the landline. Follow the opening credits titles with the club song Jaan Pehchaan Ho. Next; seven ‘lucky’ people from the club win an all-expenses-paid vacation to an overseas foreign destination. The seven are Rakesh, Seth Dharamdas, Kishan, Madhusudan Sharmaji, Miss Kitty, Dr. Acharya and the niece of Seth Sohanlal, Miss Asha. 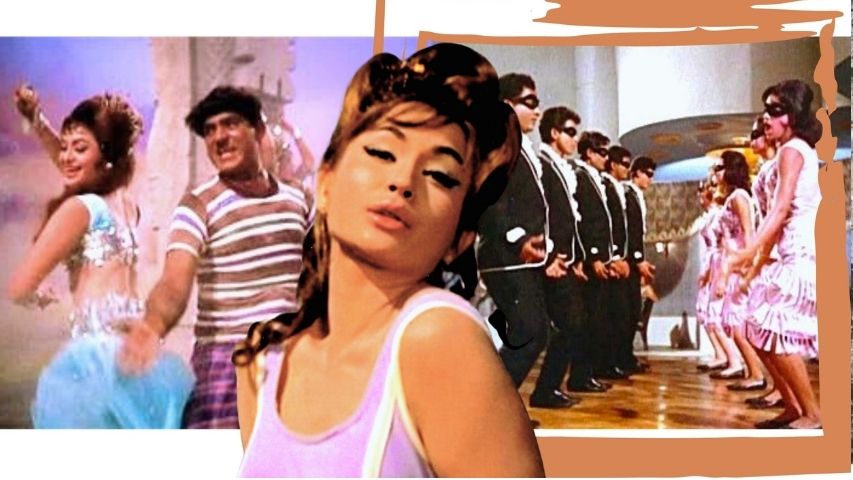 However, the group has to descend in an open field because of an engine problem in the aircraft. The passenger’s wander around with the flight attendant Anand and are shocked on seeing the plane zoom off. Their luggage is thrown on the field, leaving them in the middle of nowhere. The group sets out to find some shelter. As they walk past a jungle, they hear the eerie title song Gumnaam Hai Koi Badnaam Hai Koi.

On reaching a huge haveli, Asha screams out loud on sighting a body on the dining table. The body comes alive though, it is that of the haveli’s butler-cum-chef (Mehmood at his comical best). He knows the details about each guest, except for Anand’s. Food supplies and comfortable rooms have already been organized. Sensing a set-up, the seven are baffled about what could be common between them.

To avoid spoiler alerts, suffice it to say the plot becomes tighter as soon as one of the guests is found dead. Everyone is suspected to have committed the foul deed. To relieve the tension, Kitty (Helen) in her fabulous outfits and swimsuits with capes often takes off for a swim to the deserted beach nearby. She also flirts with Rakesh (Pran) whom she addresses as Rakes while he often forces her to share a drink. Being smart, she avoids his advances saying Mujhe Sharabi Pasand Hai Par Sharaab Nahi.

As for Asha (Nanda), she develops a soft corner for the inscrutable flight attendant Anand (Manoj Kumar). Unsure about his motives, she doesn’t quite trust him. After much ado, the needle of suspicion keeps pointing towards Anand. Every night the eerie title song is heard and one life is lost. The rising body count suggests that there is some link with the two murders at the film’s beginning.

Gumnaam was a super hit at the ticket counters. Besides its lush production values, deft direction and credible performances, especially from Helen and the hilarity-oozing Mehmood, the music score by Shankar-Jaikishen was a major factor in its success. 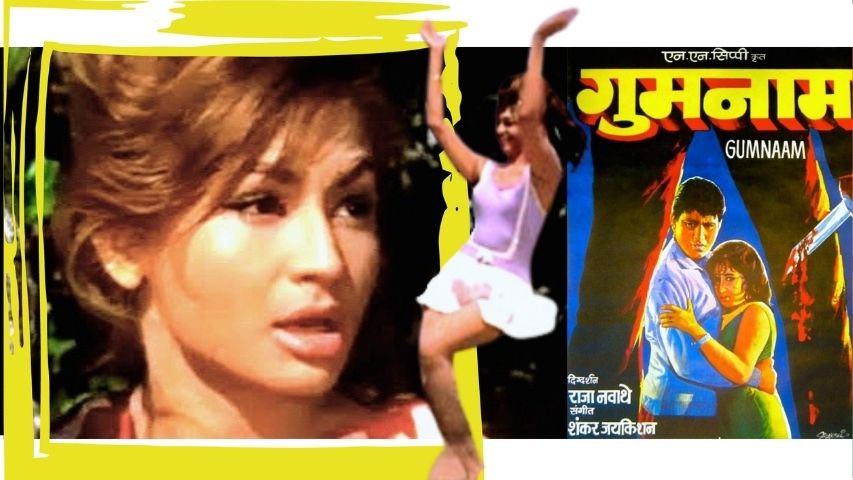 The opening number Jaan Pehchan Ho was a zingy number rendered with abundant energy and spirit by Mohammed Rafi. It showcased a bunch of sleek looking domino-masked and Chelsea boot-clad men called Ted Lyons and his Cubs. Laxmi Chhaya danced to the beat with them in perfect coordination with constant head tossing and frantic hand movements and at times making comical expressions tearing through the dance floor with her moves. The choreographer, Herman Benjamin, who appeared as Ted Lyons himself, received his due acknowledgements after toiling in Bollywood for years. Incidentally, the song went on to be used in several ad films and its music was incorporated in Hollywood’s Ghost Town (2001) directed by Terry Zwigoff.

The soundtrack was remarkable for its other songs, too. Is Duniya Mein Jeena Ho Toh Sun Lo Meri Baat rendered by Lata Mangeshkar was pictured marvelously on Helen in a swimsuit when the characters are under stress since two people of them have already been killed. The duet Peeke Hum Tum Jo Chale Aaye Hai by Asha Bhosle and Usha Mangeshkar showed a tipsy Nanda and Helen dancing, while brandishing a whisky bottle as if to quell their anxieties.

Other songs like Ek Ladki Hai Jisne Jeena Mushkil Kar Diya shot on Manoj Kumar and Nanda on the beachside rocks was passé but another romantic song filmed on the rain-splashed lead pair - Jaane Chaman Shola Badan - provided much relief from the tension, never mind if it ends with Nanda screaming out loud again on tumbling over yet another dead body.

And there was the iconic dream sequence via the song Hum Kaale Hai Toh Kya Hua Dilwale Hai rendered by Mohammed Rafi. Here Helen and Mehmood indulge in a fun-and-frolic number, with dozens of chorus dancers shimmying away on an elaborately designed studio set.

Cabaret queen Helen was given one of her first opportunities to display her acting skills in a full-fledged role. Instead of coming off as just another stereotyped seductress, Kitty was portrayed as delightful and carefree. Especially during the scene before the killer targets her, she demonstrates her fear with amazing conviction. 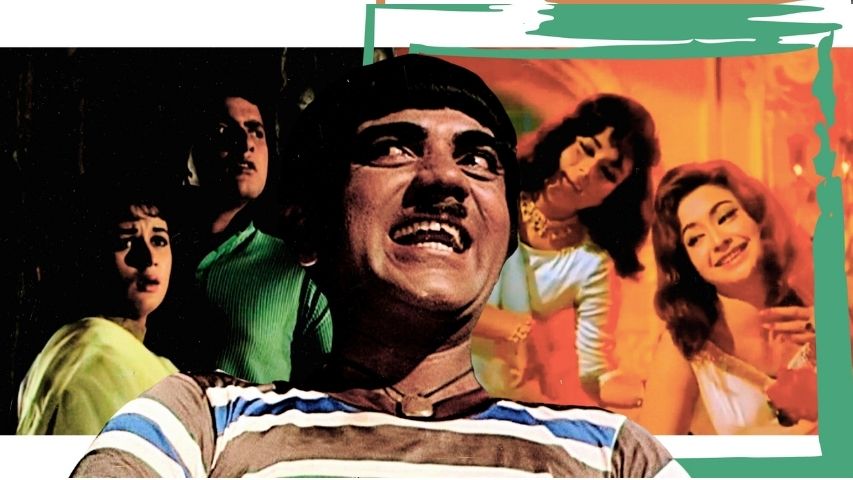 As for the number Aayega Kaun Yahan by Sharda, it used the piano as its key component. The hauntingly beautiful song was dropped since the film had become too lengthy but was retained in the soundtrack album.

Gumnaam Hai Koi the title track, which appears at crucial moments throughout the film was a thematic motif heard in the voice of Lata Mangeshkar, who effectively conveyed the dangers looming around the ill-fated people. Her mild laughter right at the beginning of the song still manages to give you a panic.

It was rumored that Manoj Kumar had ghost-directed the film. The actor was known in any case to rewrite the script dialogue for many of his projects. Uncannily, Mehmood received higher billing than Manoj Kumar and Nanda, leading to some issues between him and the leading star. Indeed, it’s a lore that Manoj Kumar had wished to delete the song Hum Kaale Hai Toh Kya Hua but the director refused. Needless to add, the song remains popular to this day and age.

Raja Nawathe’s direction kept the viewer at the edge of their seats and I often wonder what it must have been like watching this slick thriller on the big screen. I have thoroughly enjoyed watching it on video time and again with my family.

Helen and Mehmood were nominated for Best Supporting roles for popular awards. Many directors have tried to remake Gumnaam. Mahal helmed by Keshu Ramsay, starring Suresh Oberoi, Roshani, Prema Narayan and Ashok Saraf turned out to be half-baked, tanked at the box-office. A Marathi film too was made on the same lines in 1992 starring Sachin Khedekar.

Even though the current prints of Gumnaam have marginally benefited from restoration, I am hopeful that we will get to see a better print for the future generations to watch and treasure. Also, I hope someone remakes this suspense classic to suit today’s conditions, after acquiring the remake copyrights of course.