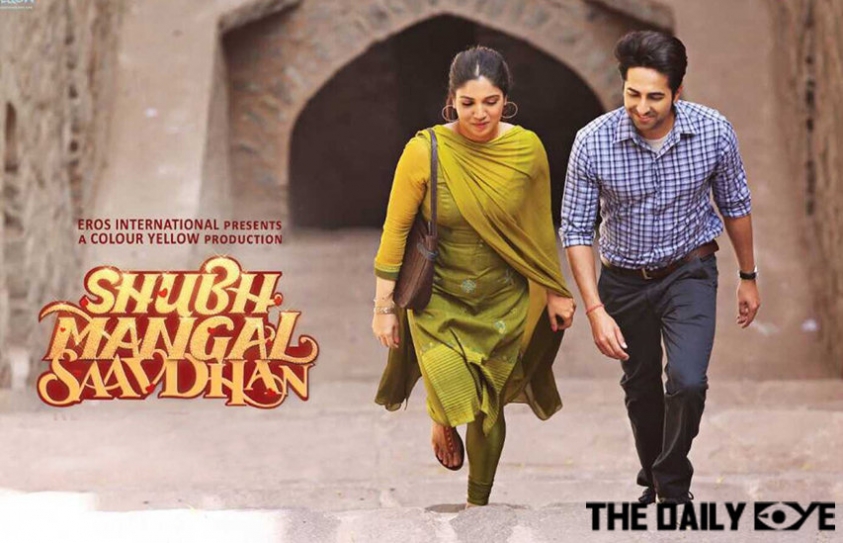 In a country like India issues related to sex are often not spoken about much and are meant as a taboo in some parts. People roll their eyes away when such topics come to the big screens. Still, R.S Prasanna has presented his film Shubh Mangal Saavdhan courageously after three years of prepping and waiting, and the casting the hit pair of Dum Laga Ke Haisha. Shubh Mangal Saavdhan is the remake of 2013 Tamil film Kalyana Samayal Sadham.

The story is about a guy from Delhi, Mudit Sharma (Ayushmann Khurrana) and Sugandha (Bhumi Pednekar) who fall in love with each other. It's love at first sight! Sugandha, on one hand, doesn't want to get married hastily. She wants to take their relationship to another level first. Mudit, on the other hand, is extremely reticent and thus, fails to approach her to convey his feelings.

This is when the parents come to the rescue. Mudit and Sugandha match on a matrimonial website and are supposed to get married finally. It's an arranged marriage. Sugandha gets upset upon hearing this which results in Mudit taking the upper hand to convert his arranged marriage into love marriage. Everything's hunky dory until the day before the wedding when Mudit realizes that he suffers from erectile dysfunction.

He tries to flee away from this situation by making the excuse of eating "onion kulcha" in lunch but fails miserably. Here comes the twist in the tale. The film goes on a hilarious ride filled with mayhem after the family and relatives get to know about this problem. They pitch in ideas and try to cure this problem. It's nothing but humiliating for Mudit but a laugh riot for the audience!

Bhumi Pednekar looks decent on the screen as she did in her previous films Dum Laga Ke Haisha and Toilet-Ek Prem Katha where she played similar roles like she did in this film, that of a woman who faces traditional issues and in the end sends a message to the audience. After Bareilly Ki Barfi's success, Aayushman Khurrana is back in yet another rom-com film. He's sweet, the best amongst all other actors, and quite funny at times. He plays a lovable character like he does in most of his films and hasn't failed to impress this time too.

R.S Prasanna fails with the performance of the cast despite having one of the best supporting actors of Bollywood like Seema Pahwa and Beijendra Kala. The film revolves only around the two protagonists which become annoying after some time. Nonetheless, there are some scenes when the audience will LOL literally such as the conversation about sex between mother and daughter and a father in law - son in law scene of a visit to the veterinary doctor for treatment of erectile dysfunction (which is humorously called "baal tod" and "gents problem" in a scene).

R.S Prasanna tries hard to make the audience laugh, and he does indeed in some scenes but the film comes out quite flat eventually. This could have been a chucklesome feature if only he could have avoided the flaws and omitted the errors! Although, his courage to bring out such topic in open must be appreciated