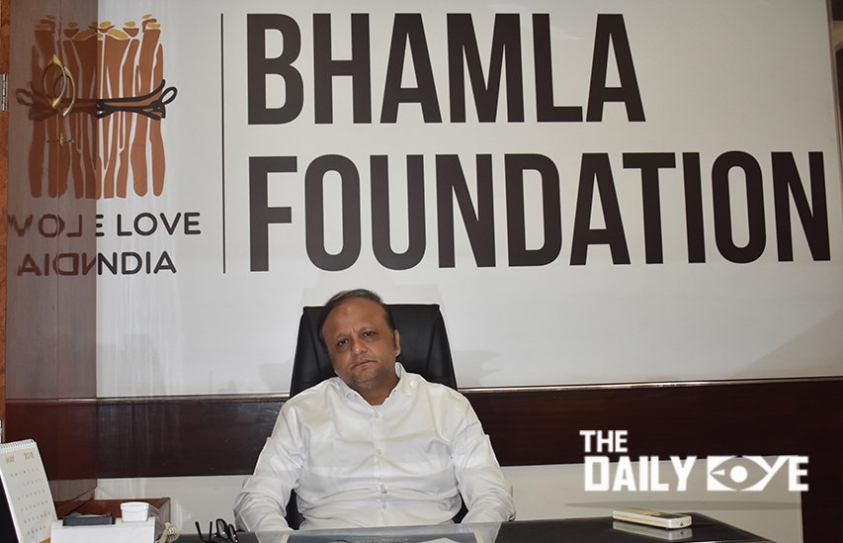 Bhamla Foundation: Working for a Greater Cause

The World Environment Day is the UN's most important day for encouraging worldwide awareness and action for the protection of our environment. From the time it began in 1974, it has grown to become a global platform for public outreach that is widely celebrated in over 100 countries. Every year, the Environment Day is organized around a theme that focuses attention on a particularly pressing environmental concern. The theme for 2018 is ‘beating plastic pollution’.

This year’s global host country being India, the government and various organizations in the country are taking different efforts at the local and the national level to spread the message and address the various environmental issues present in the country.

This World Environment, The Daily Eye is glad to carry the interview of one such person who has been doing tremendous work in the city of Mumbai since the 1990s. Meet Mr. Asif Bhamla, President of the Bhamla Foundation, in conversation with Sukanya Sudarson. The Bhamla Foundation in collaboration with the United Nations recently launched a catchy jingle ‘Tik Tik Plastic’ to #BeatPlasticPollution and to raise awareness against the use of plastic. 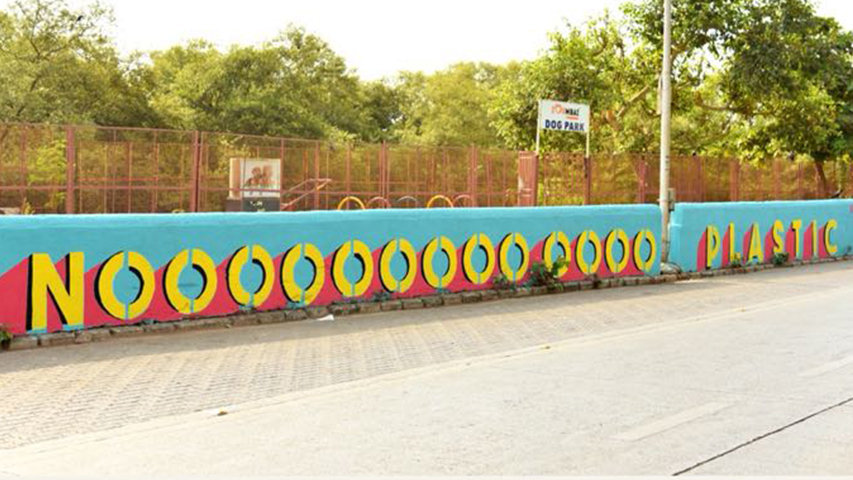 Q: Sir, when you started the Bhamla Foundation in 1989, you had called the initiative “We Love India”. How did it all start, what inspired you in the beginning?
A: 21 years back, when I had just finished my college we used to have these socials, where we would celebrate Eid, Diwali and Christmas. So we had this social group “I love Bandra”. It transformed and went on from there, and a few senior political leaders said that “this can be a movement, so you should have a tag line ‘We love India’”. They said Bandra is too small and it is very area-centric, so we went on from there establishing Bhamla Foundation with the ‘We love India’ tagline, and thus the symbol, the sticks tied together, combining and uniting people of all cast, color and it all kicked off from there actually.

Q: What were your initial areas of focus when you started the foundation?
A: Initially, when we started, we worked a lot in the field of children with special needs. In fact we are very closely associated with children with celebral palsy, with autism, with spastics. We actually had our social group of youngsters from various colleges and schools who used to go and attend these children of lesser God, on a weekly basis like a Saturday or a Sunday. We had earmarked for about 7-8 centres in the suburbs, where our students would go and spend time with these children. We would mediate between these students and the children. We also had students from the 10th standard volunteering with us.

The primary purpose of these visits were to show them how blessed they were when compared to the other children who are so much in pain. In the process, we saw a lot of transformation; we saw a lot of students, who dedicated themselves to this cause and so emotionally wielded to the cause. Many of them are married now; they are CEOs of such big brands, but they still follow the tradition of giving. It is that instinct which they carried from their youth that they are still helping organizations. They ensure that they continue to help and influence others to contribute too. This is something that makes us feel good that we started a good work.

That was 11 years back, from there we have grown and transformed. We brainstormed what was the one common problem that was affecting the world? We realized environmental issues are the most focal issues, not just in India, but in the US, in Europe and in China. As Mahatma Gandhi said “the way you look after your earth exhibits your own quality, your own significance”. Taking our cue from that, we took up this cause. We started our campaign on a premature basis and we spoke about the world environment day. Observing such days was not very big those days, and people questioned the need for such a campaign. Media was not very vibrant then as it is now. We had to reiterate the fact that as population increases the problems of today were going to increase too. Many made fun of us too, but today there are so many eco-champs who are associated with us.

When we took up the Swachchta Campaign, I was amazed to see even students as young as 12 and 13 years volunteering to clean and colour Bandra. We had senior citizens with placards and brooms working it out in the sun. We were encouraged by the response, and the desire of people to come forward for a good cause. We were amazed by the energy the people brought to the task.

Q: Tell us about the ‘Tik Tik Plastic’ song that has so many singers lending their voice and has gone viral today.
A: For this, I would definitely like to credit the social media for this. They played a very important role, not just for me but for everybody. I think the reach is so fast and so far. This song ‘Tik Tik Plastic’ has had more than a million views. And I should be very thankful to all the singers from Shaan, Shankar Mahadevan, Ayushmann Khurana, Arman Malik, Kanika Kapoor, Sunidhi Chauhan and the number of other singers who all voluntarily sang for it. It was written by Swanand Kirkire, a national award winner, who wrote for 3 Idiots and PadMan. When we saw these stars volunteer for such a cause, we felt we were so blessed as an organization.

The Ministry of Environment, Government of India requested if they could use the song on their social mediums. And we are more than glad to let the country see it and it will surely be an anthem by the 5th June. Moreover the United Nations has posted it and they are very happy with it.

Q: India is the global host this Environment day, and this year’s theme is ‘Beat Plastic Pollution’. What are your initiatives towards this?
A: India being the global host, it is also the focal point of the United Nations. India is a large country and the amount of loss the plastics are causing to the oceans, to the seas, to the sewages is really vast. To create this awareness among the people, in collaboration with the UN, we have initiated this very huge campaign. Though we were hesitant at the beginning, they encouraged us to take it up because of the years of work the organization has put in for the last 11 years.

We then spoke to the singers and most of them agreed to come forward for the cause in just four days. All of us believed that music will reach people faster than speeches and lectures. A message through the medium of music and with a meaning will surely be a hit among public. We gathered some resources to shoot the song and we planned to make it a professional one. Even Hungama has also come forward to air the song on their channels. The end product is surely a hit. Artists like Shaan and Shiamak Daavar have been a part of it willingly. And I am really grateful for that.

Q: There is saying, ‘old habits die hard’.  When you talk to volunteers or individuals about ‘beating plastic pollution’, how do you, as an organization, convince people to stop using plastics and move to harmless methods?
A: The state of Maharashtra was the first to venture into saying that ‘we ban plastic’. I am grateful to the Ministry of Environment and the State Ministry which has taken the initiative because it was a steadfast move. I think it was really taken well and I think the people are taking its up seriously too. When we tell people with love to do something, people do it. The other day at home, we ordered some Chinese food and it was delivered with re-usable paper containers and it didn’t have fork or spoons of plastics but the re-usable ones. I have started carrying my own metallic bottles. So people make changes when they understand the importance of the whole thing. In this country, I think if we tell people rationally, they are willing to change and evolve and take up the responsibility.

Today, social media is so active and it can reach people far and wide. This campaign we started has become a movement and people are getting associated with it on their own. Radio channels have been playing the song, mobile companies want to use it as their ring-tone. Whether it is music, or radio or television, people listen and change. I personally believe that people have realized the importance of preserving our environment and are taking up the cause in their own small ways.

The youth today are socially conscious and are concerned about their future and the future of their children. There is a major concern among the teens and the youth about lack of water resources, degradation of nature and the agricultural practices and that they have to co-exist with nature in the coming days. So there is a radical change, there is a radical awakening and I think that’s going to take the people far and the nation far.

Q: How does Bhamla Foundation reach out to rural areas in Maharashtra or in other parts of the country?
A: To be honest, we have been very active in lot of metro cities, especially Mumbai. Mumbai itself has so many pockets where so much work is needed. There are slum areas and sub-urban areas where there are problems of lack of water, drainage overflow, lack of common toilets, etc.,. So I believe lets clean our home first and then the work we are doing will spread to other areas too.

Q: I see your young daughter is also involved in the activities of the organization. What would you like to tell the youngsters today?
A: I did say in my earlier statement that there is a concern among the teens and the youth of the country. I never mentioned to Saher (daughter) that you have to volunteer for this. When Bhamla Foundation took up an activity with their school, it was then she realized that I was involved in such activities. She was part of the cleaning drive and took part in it with the same zeal and enthusiasm like any other student of the school.

When we painted Carter road, she took it upon herself and led the young people there. I keep encouraging her and other young people and volunteers to take up issues like rain water- harvesting, propagating solar panels and planting trees around us. Young people should work at their own levels and become eco-champs and lead campaigns for the people. Youngsters should get into the field and take it upon themselves to better our environment.