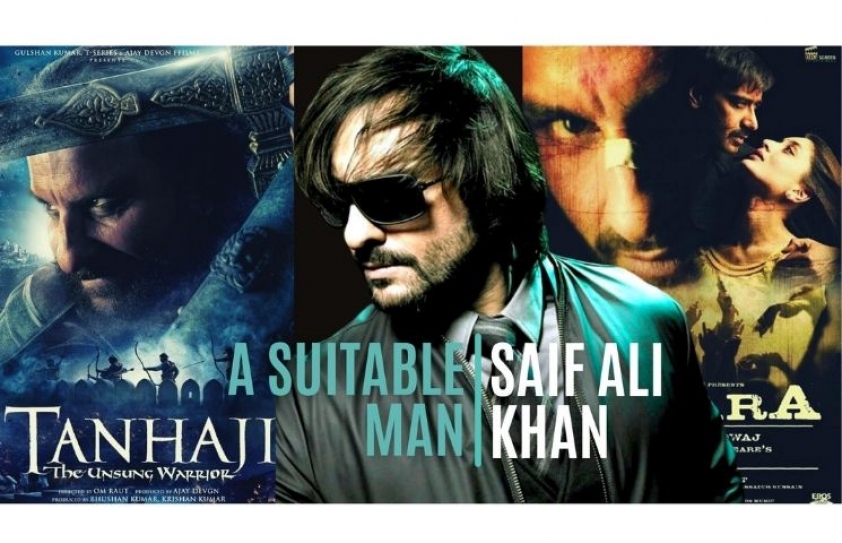 Khalid Mohamed’s freewheeling chatfest with Saif Ali Khan, on his change-over from being ‘flighty’ to becoming a mature actor and a devoted family man.

Once the prime go-to choice actor for roles of the rhapsodic romantic hero, like Shashi Kapoor before him, today he’s sensible enough to act his age - 51, both on and off the screen. Those days of breaking into brawls at high-end restaurants and even threatening journalists with dire consequences for printing offensive remarks, are done.

Quite clearly, Saif Ali Khan is now relaxed, a doting father to the paparazzi’s delight, Taimur, and the relatively protected Jeh, as well as to the 26-year-old Sara Ali Khan and  21-year-old Ibrahim Ali, the children from his first marriage to Amrita Singh.

Sara is already a sparky heroine on the ascent, while Ibrahim Ali has kick-started his career as an assistant director to Karan Johar on Rocky aur Pinky ki Prem Kahani. Given his looks, personality and genes, you can bet , he will join the league of young actors.

Although Amrita Singh had taken a sabbatical from the movies when their children were growing up, she has returned to acting in key character roles. Without any let-up, Saif’s second wife, Kareena Kapoor, has continued to pursue her career as a frontline Bollywood heroine.

Spending quality time with his extended family has come quite naturally to Saif, even as he jet-hops between continents either to answer his professional commitments or snatch a couple of weeks for a vacation. His occasional interviews indicate that he’s careful with his statements. Moreover, he’s one of the very few stars who hasn’t been seen or heard speaking in favour of any political party during the general elections, or before and after. No comments is the most effective comment. 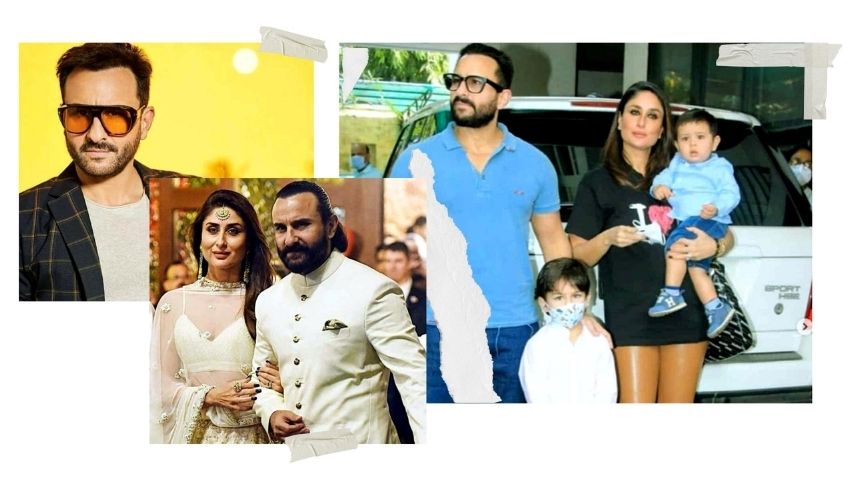 He does try out quirky and out-of-the-box projects like the zombie flick Goa Goa Gone, the whimsical take on a man who’s diagnosed as terminally ill in Kalahandi, and Baazaar, an account ‘inspired’ by Oliver Stone’s Wall Street. None of them made big-time whoopee on the cash ledgers though.

Followed the revenge drama Laal Kaptaan, the horror comedy Bhoot Police, the blockbuster period biopic Tanhaji: The Unsung Warrior, the London–located laugh-raiser Jawaani Jaaneman produced by him - and Bubbly aur Bunty (2021), which saw him tapping his versatility. He can be rustic and he can be urbane felicitously.

In addition, he is one of the first Bollywood top actors who ventured into the OTT space with the two seasons of the Netflix series Sacred Games, in which he enacted an upright cop under severe pressure to nab a serial killer. Followed Amazon Prime Video’s uber dramatic series Tandav.

To offer a glimpse into his heart and mind, here are excerpts from my conversation with the Nawab of Pataudi Jr whom I’ve seen morph from a fun-loving guy to a steadfast actor and parent:

What motivates your selection of roles?

I don’t have a ready answer for that. Primarily it’s the script, the graph of my role, the director’s calibre and of course my fee - which can vary. I wouldn’t charge the money I usually do, if the project is a purposeful one. Professionally, this may sound arrogant but I don’t follow market dictates. As far as I can help it, I’ve kept my head on my shoulders, never interfered with the director and have always strived for quality rather than quantity.

The intention has been to do an honest day’s work and lead my life to the brim. I haven’t made any friends in the industry. I didn’t come here to make friends. Neither has anyone gone out of his way to become a friend of mine. Perhaps like the saying goes, familiarity breeds contempt. 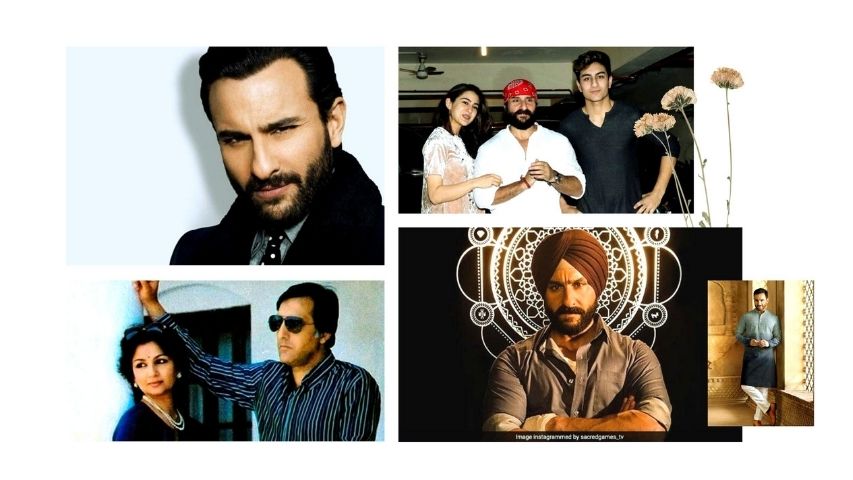 Surely co-actors can be friends?

Of course, as a co-actor Ajay Devgn gives you space. Salman Khan has that big brother type of protective personality, he’s all heart. As for Shah Rukh Khan, we’ve done some really terrific work together.

After Kal Ho Na Ho, (2003), my first solo hit Hum Tum (2004) happened. Frankly, I used to be quite flighty, Shah Rukh inspired me to become a responsible, saleable actor. I understood what it means to be irreplaceable, involved. For Kal Ho Na Ho, a shot had to be completed before we were thrown out of a railway station in the US. Shah Rukh suggested that there was another way of doing the shot there quickly… and we completed the shoot, saving the production team stacks of cash.

When I entered the film industry, Kamal Sadanah was one of my closest buddies. But you know how it is. With time, we have drifted apart. Quite ironically I was  thrown out of my debut film Bekhudi (1992) by Rahul Rawail, and Kamal who had also been considered for the part was back in. I guess your 4 a.m. friends are the ones you’ve made in school… like Salim Siddiqui who’s in London. My friends need to be part-time psychiatrists, who understand the working of my mind like I need to understand theirs.

Tell me, could you have done a film with Shah Rukh Khan like the gay-themed Dostana?

You bet I could have! We would have even kissed each other on the lips for sure. Those guys (Abhishek Bachchan and John Abraham) chickened out, didn’t they? We wouldn’t have been afraid of looking gay or acting gay. It’s no big deal, one’s sexual orientation has been recognised legally as a personal choice. It would have been a blast doing Dostana.

At an award function once, where Shah Rukh Khan and you were anchors, you riled up quite a few film industry people with your remarks. Remember?

Look, I was just speaking the lines written for me for the event. I wasn’t settling any scores. Quite a few film industry people did get upset. Right, so that kind of humour on an award stage doesn’t go down well. I resolved never to get into that zone again.

Ha! I don’t know whether I ever enjoyed acting with him. In any case  he’s a one-man show now, I believe at times he even writes his own dialogue. 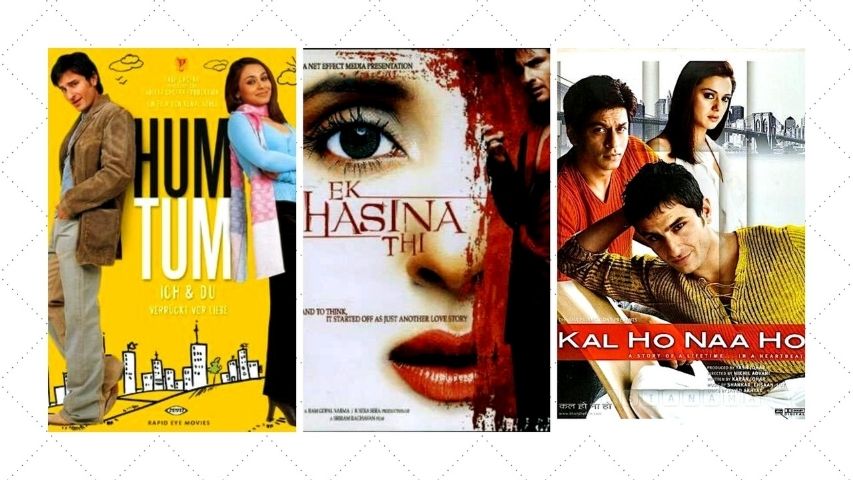 Not many know that  when you first came to Bollywood, you stayed at Gulzar’s home at the insistence of your mother (Sharmila Tagore). Right?

Right.. and he was one responsible parent. He’d make sure Bosky wasn’t there when I was around. Anyway, I’d come back home at 7 a.m., find him playing the sitar and feel awfully guilty. And look at me now, Bebo (Kareena Kapoor) says I’ve become an old fogey, cleaning up, rearranging my books and music…  I guess I’ve become quite like Amrita used to be.

How do you look back on your 13-year-long marriage with Amrita and then the separation?

It’s simply this, our marriage didn’t  work out. Still, I look at the past with tremendous respect. I talk to Sara on the phone constantly. Ibrahim has an entirely different personality. I’d like to time-manage better, be with them much more. I hope they understand. It doesn’t make sense to be with them on outdoor shooting; it can be a nightmare - like years ago Sara and Ibrahim were in London during the shoot of Love Aaj Kal  (2009) and then the maid ran away!

Do you feel all grown up now?

The last 10-12 years have taught me a lot. No more late nights, no more clubbing, no more tequila shots. I’d rather be at home, nursing a cup of coffee. Or at most I’d rather be by the fireside at an English pub, nursing a single malt. I must have been a terrific guy in my previous life. This boy at Winchester College, in Hampshire, who was to go to Oxford to study law, and maybe work for a bank, became a movie actor.

It’s been my mother’s ‘pull’ finally.  I must have inherited her acting genes. Instead of  hiding behind grey suits, I’d rather be dancing in Hawaii! And to think, there was a time when we weren’t even allowed to watch television. The domestic help in our Delhi house got a TV and VCR years before we did. No kidding. 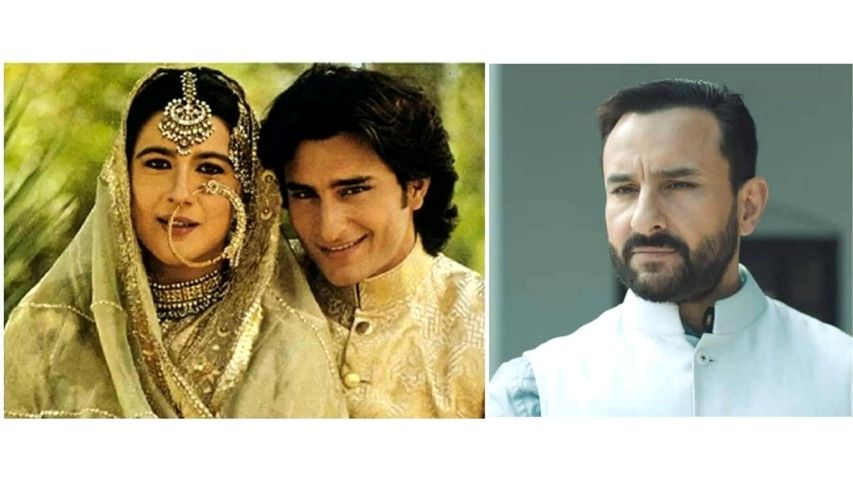 Has Kareena mended your ways?

She keeps me occupied for sure. She’s been a shot in the arm, a good influence. I was overwhelmed by the maternal side of Kareena when I was in hospital once. She was with me through it all. I tend to fall in love as if I was hit by a ton of bricks and then I’m cautious. I have to be sure. What Bebo and I have together is very, very special, she has re-invented me. From a hysterical guy I’ve become a homemaker. And she knows what I’m all about, like say, I’d rather play the guitar to chill, than strum away at a piano.

Are you alluding to the time you had a heart scare?

Yes, I guess I was smoking a lot. A clot had formed in my artery. I was treated, recuperated and told by the doctors that now I had the heart of a 20-year-old athlete. The real villain of the piece was bhel puri. I’d had an excessive amount, which had led to gastroenteritis. That was a sign to me, be nice to yourself. It’s not as if I’ve turned to a diet of toast and jam though, but I wouldn’t eat red meat every day.

How many times have you fallen in love?

That’s asking! Thrice, I guess. Marriage was a major relationship, then there was another lady… please let’s not go there… and Bebo, love has never been like this before and never will be.

On another note, have you seen your mother’s Satyajit Ray films?

Rather belatedly I’m afraid. They’re world classics. She was magnificent in Apur Sansar, Devi, Aranyer Din Ratri and Nayak especially. By the way, as a kid, I’d go mad seeing her smoking a bidi in Mausam. I’d get depressed to see Mom go through so many travails in Amar Prem. I was more steeped into the Pataudi tradition of cricket. 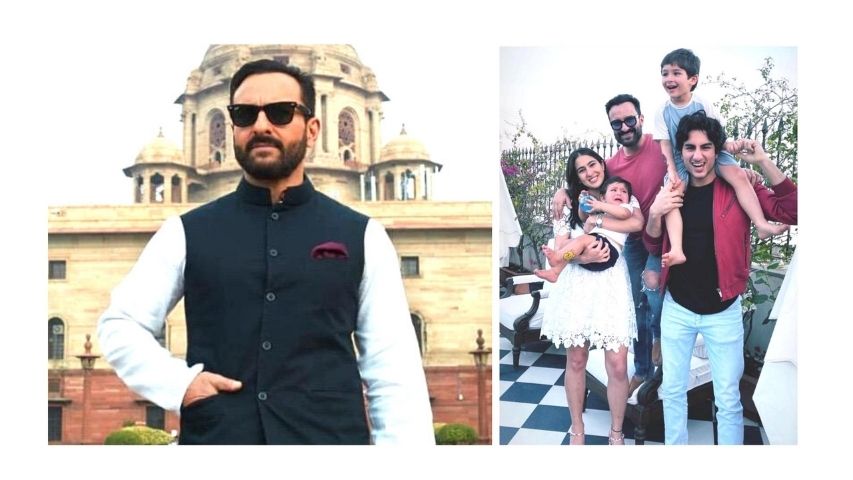 Were you intimidated by your Dad?

I used to be petrified of Dad. He was Tiger Pataudi, captain of the Indian cricket team at the age of 21. With time  he mellowed, became witty, a Prince among friends. Clearly my outlook towards life has been shaped by Dad. So it all adds up, in fact it would be wonderful if Ibrahim becomes an actor.

Which kind of specific roles would you like to play now?

I’d like to do a gritty action movie… or maybe a ghost story like Madhumati (1958), or a supernatural thriller like What Lies Underneath (2000). Maybe even a comedy of the sort I once did, Love ke Liye Kuch bhi Karega (2001), as long as it has me charged about being at the shoot every morning.

Which of your movies do you remember with the highest regard?

Whose opinion matters most to you at the end of the day?

Quite often Mom’s. Occasionally, she’s very generous and even says  fondly that I’m a better actor than her.