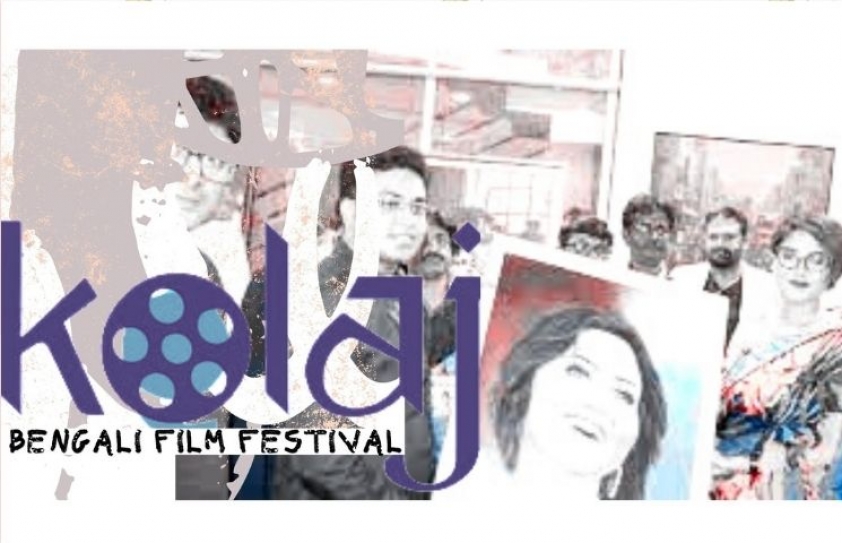 The first edition of the Kolaj Bengali Film Festival was a welcome effort in getting Bengali films a national reach. Shantanu Ray Chaudhuri, who was on the jury, writes about his experience.

For a film industry that suffers from a tangible lack of pan-India reach and visibility, there’s no denying the importance of a festival like the Kolaj Bengaluru Film Festival organized between 8th and 10th April in the IT hub of the country.

Coming at a time when the state has been simmering with communal tension, it was heartwarming to see a film festival trying to spread the message of the universality of the arts. Curated and designed by the indefatigable and indomitable Sumana Kanjilal (the driving force behind the Bengali Film Festival held in Telangana in late 2021), the festival showcased some interesting new Bengali films. Given the dire straits the industry is in with theatrical releases held up or delayed infinitely in the wake of the pandemic, the festival, with popular actor Rudranil Ghosh as its brand ambassador, made it a point to bring to the forefront films that have struggled to get noticed.

An exciting initiative of the festival was the inclusion of short films, as many as seven of them. Though, as is probably a given in an inaugural edition, not all of these quite measured up creatively or in cinematic language, there were a couple that stood out. Of these special mention needs to be made of Sreelekha Mitra’s directorial debut, Ebong Chhaad… (Of Roofs). 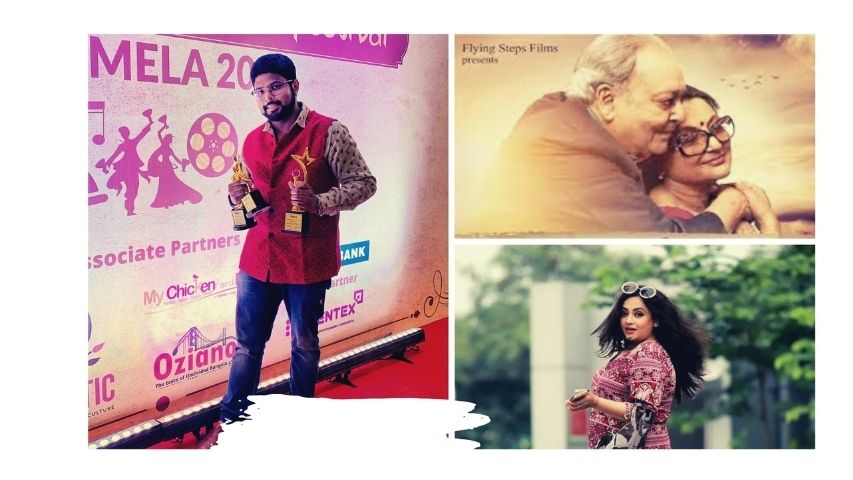 Capturing the various stages of a woman’s life through the interesting device of her many activities on the terrace of her house, from an infant using it as a playground to a young woman for whom it offers a space for secret romantic trysts to an elderly woman reminiscing about the past, the film shows the versatile actor’s understanding of the medium as she does away with dialogues altogether, using visuals to tell her story. Sreelekha, much lauded for her recent appearance in Aditya Vikram Sengupta’s Once Upon a Time in Calcutta and for her films like Rainbow Jelly (2018) and Choukaath (2015) among others, took home the Jury’s Award for best film and best director for Ebong Chhaad. On stage to receive the awards she expressed her desire to make an anthology of four films around the theme, incorporating the many elements of a house: a verandah, a bedroom and a kitchen.

The other short film that caught one’s attention was Samik Roy Chowdhury’s Okaigari, a dark, engaging ‘thriller’, which uses subtle psychological aspects incorporating elements of a Japanese doll, the Okaigari of the title, a traditional paper-mâché doll designed so that every time it is knocked over, it returns to its upright position, to tell the story of a nondescript lawyer, played very well by popular actor and stand-up comic Mir Afsar Ali. Also making a strong case was Sourav Das’s performance in the short, Canvas, which fetched him the jury’s best actor award.

Of the feature films on the list, I have already written extensively on Suman Ghosh’s fascinating portrait of Calcutta and its indefatigable ‘survivors’ - Searching for Happiness, Arjunn Dutta’s fable-like Guldasta, and Anjan Kanjilal’s refreshing take on a live-in relationship, Shohobashe.

Searching for Happiness rightfully won its remarkable child star Shahida Neera, who was only four years old at the time the film was shot, both the popular and the jury’s awards for best child actor, while her mother, Sudiptaa Chakraborty, took home the award for best supporting actor. Both Guldasta and Shohobashe won a clutch of awards in the popular category and the jury’s awards. Particular mention needs to be made of Shohobashe’s music by Soumya Rit, which came in for praise as did its lyrics by Anjan Kanjilal, while 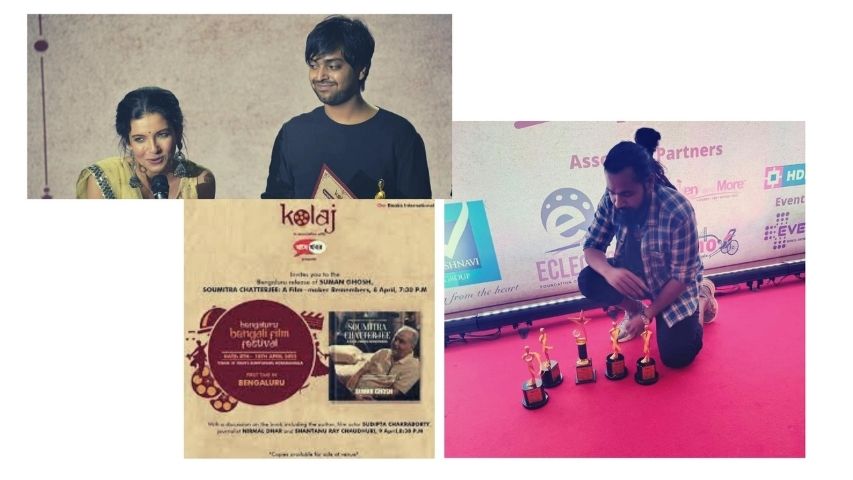 Guldasta won its leading actor, Swastika Mukherjee, the best actress award. Her presence at the award ceremony was the festival’s highlight.

But the festival’s main achievement lies in the way it brought new filmmakers into the limelight, in both the short and feature film categories. First-time filmmakers, including Anjan Kanjilal, directed quite a few of the feature films. Of these the two that made the deepest impression on me were Bappa’s Shohorer Upakatha and Joydeep Mukherjee’s, Akaash Ongshoto Meghla.

In an industry starved of interesting themes, and weighed down by infinite iterations of Byomkesh, Feluda and Satyajit Ray spin-offs, these two filmmakers come as a bright ray of hope. For first-time directors, their films demonstrate a lot of virtuosity in the structure and the telling, both of them eschewing a linear narrative and opting for literary source material rarely attempted in Bengali cinema; Badal Sircar’s Baki Itihas is the inspiration for Bappa’s film and Joydeep brings together two short stories by Swapnomoy Chakroborty for his debut feature.

As Joydeep Mukherjee states, ‘I believe the role of festivals like Bengaluru Bengali Film Festival is becoming more significant as the theatrical opening for independent films in regional languages has narrowed. It gives a platform to independent filmmakers to showcase their work to the film fraternity and to reach an audience outside of Bengal. It is an immense pleasure for me that after the Telangana Bengali Film festival again our film Akash Ongshoto Meghla has bagged the jury award for the best film along with some other significant awards at the BBFF. I specially cherish the award for the best screenplay, as it was a kind of journey for me to pen the screenplay of my film. This awards will definitely encourage and open new possibilities for my future endeavors.’ Adds Bappa, whose Shohorer Upakatha was another festival favorite, ‘A festival like this is impressive and important. More needs to be done for the promotion of Bengali cinema in the future. I am really happy that the jury awarded the film. It will inspire me and independent filmmakers like me to do better.’ 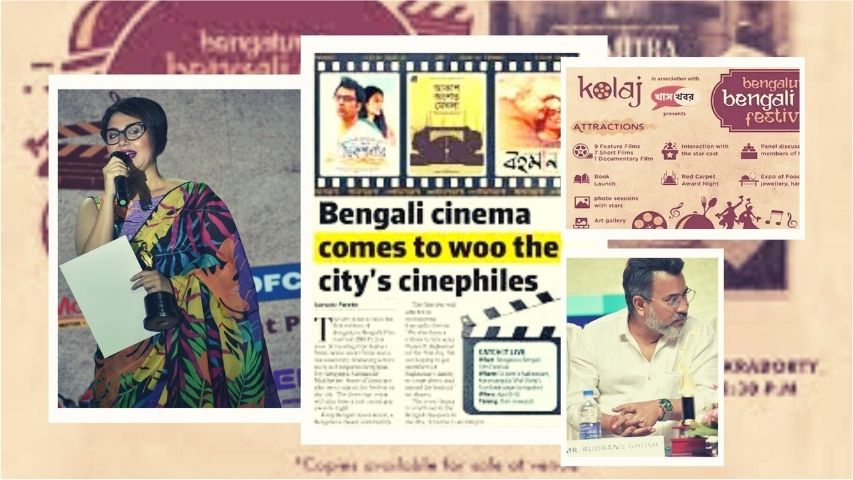 There were organizational hiccups, which should be addressed in the future editions. The local collaborators, Kolaj, a Bengali association based in Bengaluru, could do well to streamline the proceedings and get more people to attend the screenings. I never quite got over the feeling that Sumana Kanjilal’s herculean efforts to put this together were somewhat short-changed by the lack of a sizable audience. Such festivals could also do with retrospectives of the legends of Bengali cinema, along with focusing on contemporary cinema. At the same time, there should not be a plethora of awards to satisfy all the participants. Awards need to be merited. Also, the emcees left a lot to be desired, with the RJ anchoring the opening ceremony seemingly unaware of the credentials of Suman Ghosh as a filmmaker, while inviting him on stage for the launch of his book, Soumitra Chatterjee: A Film-maker Remembers. That’s an unforgivable preparatory lapse, which was also evident in the awards ceremony where the emcees appeared at sea.

One hopes that these creases will be ironed out in the second edition and we will see more stalwarts of the industry, notorious for its ‘frog in the well’ approach, coming forward to participate. Only then can the festival hope to avoid a disparaging remark like, ‘These days Busan and Baruipur film festivals have become the same’, made by Buddhadeb Dasgupta about local festivals cropping up everywhere, and Bengali films rarely making it to important festivals. The Kolaj Bengali Film Festival is a welcome initiative but Sumana Kanjilal has her work cut out as curator and designer.