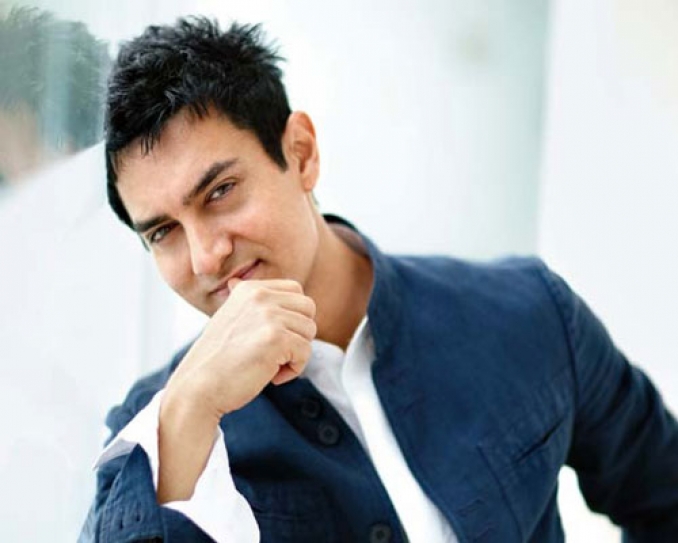 Aamir Khan is huge in Bollywood, a superstar actor, director and producer, sometimes called the “Tom Hanks of India.”
But between films –- “Dhoom 3: Back In Action” opens in December – Khan, 48, has also become a television sensation, hosting “Satyamev Jayete,” a Sunday morning show that means “Truth Prevails” in Hindi, and which tackles some of India’s most pressing social problems: forced abortions of unborn girls; domestic violence; child sexual abuse; alcoholism and treatment of the elderly.

The show launched in 2012 and became so popular it propelled Khan onto the cover of Time magazine’s 100 Most Influential People In the World issue this year. On Monday night in Washington, he will receive the first America Abroad Media award, along with Oscar-winning director Kathryn Bigelow (“Zero Dark Thirty” and “The Hurt Locker”) and the International Center on Non-Violent Conflict, a 2013 Nobel Peace Prize nominee.

Khan screened the fetal infanticide episode Sunday night at the Jefferson Hotel for a small audience whose members audibly gasped as several women told their gruesome stories. But “Satyamev” is no cheesy reality-TV shock fest. Rather Khan introduces each topic obliquely and gently before amassing damning evidence presented by victims, advocates and experts. At the end, he provides information for those in extremis seeking help.

The show on forced abortion opens with a paean to mothers, including India’s many goddesses, before viewers meet three women whose husbands’ families tricked them to get tests to reveal the baby’s sex, and often succeeded in coercing them to end every pregnancy that did not produce a son. One mother endured six abortions. A female physician was pushed down the stairs by her surgeon husband when she was 20 weeks pregnant with twin girls; the babies survived. In some cases, the only way these women could save their children was to flee their husbands and return to their parents’ homes.

Khan, who has a daughter and two sons, looks into the camera and explains that it is not the woman who determines a baby’s sex. “It’s the father’s sperm, not the mother who is to blame,” he says, as if teaching basic biology to millions of angry in-laws.
For his show on domestic violence, Khan requested an all-male studio audience. And despite the belief by many men that their wives, mothers, daughters and sisters were at maximum risk in dark alleys or bad neighborhoods, Khan offered the startling statistic that 60 percent of assaults on women took place at home.

“This is a huge problem and we are trying to chip away at that patriarchy. We try and share with many not just the personal aspect of violence but we try to get people to understand what a woman goes through when she is a victim or survivor,” he says in an pre-screening interview. “We go into the law. There are strong laws but many women are not aware of them. Many end up not taking any action because of the insecurity of where they will live afterward. The law clearly states absolutely no woman can be thrown out of the house” even if it is owned by a male relative.

With acting chops honed since childhood — his father and uncle were major Bollywood figures — Khan was asked several years ago by Uday Shankar, a former journalist who heads the Star India network, to host a game show. He declined, and spent 18 months with a few friends creating a serious program that combines solid research from experts, high production values and emotional storytelling.

By 2011, he presented his concept and conditions to Shankar: The show would be produced in Hindi with English subtitles, and dubbed and simulcast in seven other languages spoken throughout his country of 1.2 billion people; where Star was not the dominant network, Shankar would give simulcast rights to his competitor; and the show would air at the “graveyard” hour of 11 a.m. Sunday, when it would not compete with major news, sporting or entertainment programs.

“I want the viewer to take one step toward me,” says Khan, rather than channel surf from cricket match to soap opera to reality show and back to him. “We had no idea whether people would be interested in watching a really heavy topic like child sexual abuse or domestic violence.” They were, it turns out, because Khan is charismatic, empathetic and influential.

In Rajasthan, the country’s largest state, he appealed for a “fast track” court to try doctors after two TV reporters went undercover to expose abortion mills. “In six months there were two convictions” in a judicial system known for cases that can languish for decades. Ultimately “43 doctors were convicted, 39 are behind bars and fined, and 100 clinics were raided for illegal sex selection.”

For his show on alcoholism, he partnered with Alcoholics Anonymous, which in its 65 years in India has helped 30,000 people. Within a week of his broadcast, AA was flooded with 100,000 calls.

When the Sunday screening and Q&A ended, Khan discussed his work with several in the audience. Susan Blumenthal, a physician and former assistant U.S. surgeon general, says that while sex selection by abortion in India and China is well known outside those two countries, “what he is doing is informing the public there and then harnessing organizations on the ground whose work has not received the attention. This can be a tipping point.”

America Abroad Media board member Douglas B. Wilson, whose group is honoring Khan, could only marvel at the star power possessed by a single individual:
“This would be like Angelina Jolie and Brad Pitt and Oprah and Tom Hanks and Tom Cruise all together. And if they said collectively, ‘we are going to ask our country to focus on issues that cannot be ignored and we are going to use our celebrity to focus attention because this will effect change,’ that is what you have in Aamir Khan. He is famous enough that he could be twerking, but instead he is focusing on female feticide.”