Tabu in conversation with the Mayank Shekhar, Festival Director of 9th Jagran Film Festival in Delhi

The highlights of the day were a master talk between Tabu and Mayank Shekhar about the actress' three-decade successful journey in Bollywood, followed by the formal inauguration and screening of Vikas Chandra's short film Maya. The audiences were entertained by the special screening of 3 Idiotas, the Mexican remake of the popular Bollywood movie 3 Idiots. In addition, the Indian Documentary Feature, The Argumentative Indian by Suman Ghosh and Indian Features like III Smoking Barrels were screened on day 1.

On this occasion, Union Minister for law & justice and electronic and information technology, Sh. Ravi Shankar Prasad said, “I have always felt films are the biggest bridge to connect mankind. When we are watching a film, nationality and language do not matter. There is a common emotion which binds us together.” 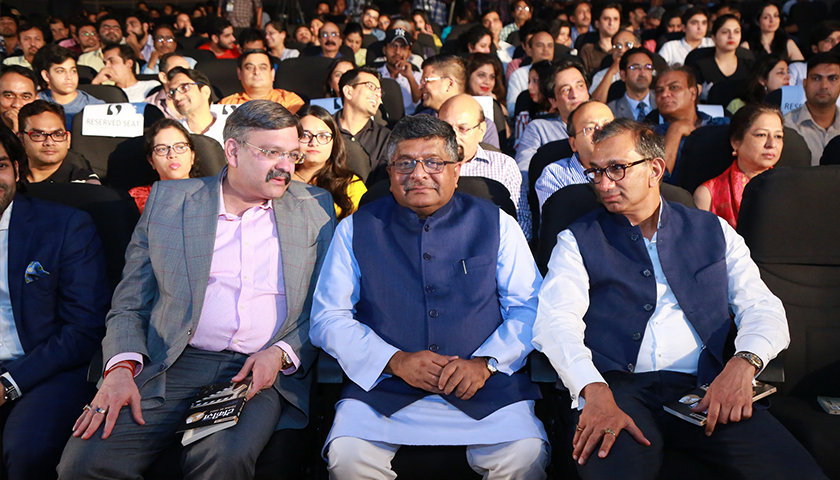 In its 9th year, the JFF, India’s largest traveling carnival on films and cinema, would travel to 18 cities, featuring more than 200 screenings including multi-lingual movies in different categories - Documentary Competition, International Shorts, Thematic Specials and Student Focus being the part of the 5-day festival fair.

Following the festive opening, more celebrities including the famous actor Saurabh Shukla and lead actor of the film Satya, JD Chakravarty would visit the festival to mark 20 years of the movie Satya. The program, ‘In-conversation with Saurabh Shukla & Chakravarty’ will be held on 30th June followed by a panel discussion involving India’s top journalists.

Mr Basant Rathore, Senior Vice President, Jagran Prakashan said, “I am elated to be a part of the 9th edition of the Jagran Film Festival which is truly India’s only Travel Film Festival. We have successfully presented a series of local and international film screenings every year, and tried to reach the local movie enthusiasts and create the sense of cinema with the Indian audience. The purpose of the festival is to spread the cinema culture.”

Festival Director Mayank Shekhar said, “We are delighted as ever to host the 9th edition of the much-acclaimed JFF.  This is my first year as festival director at JFF. We’re all learning as we go along. The first lesson I’ve learnt so far is that putting together a film festival is a lot like putting together a newspaper. We are proud to host films on grandeur amid real fanfare.”

The India Features Competition includes award-winning films such as, Shoojit Sircar's October, Reema Das’s Village Rockstars, Atanu Ghosh Mayurakshi and Lijo Jose Pelissery Ee.Ma.Yau in varied languages. Also the homage screening for legendary actor Shashi Kapoor New Delhi Times will be screened. Ask The Sexpert by Vaishali Sinha, a documentary competition along with Thematic Special documentaries in the Fan section, Being Bhaijaan, a documentary on Salman Khan and For The Love Of a Man, a documentary on Rajnikanth will be a part of seconds day’s grandeur.

The 2018 edition of the Jagran Film Festival that will connect 18 cities and showcase over 200 films commenced in Delhi and will tour to other Indian cities like Kanpur, Lucknow, Allahabad, Varanasi, Patna, Dehradun, Ranchi, Jamshedpur, Bhopal, Indore, Gorakhpur, Agra, Ludhiana, Hissar, Meerut and Raipur before concluding in Mumbai in September.