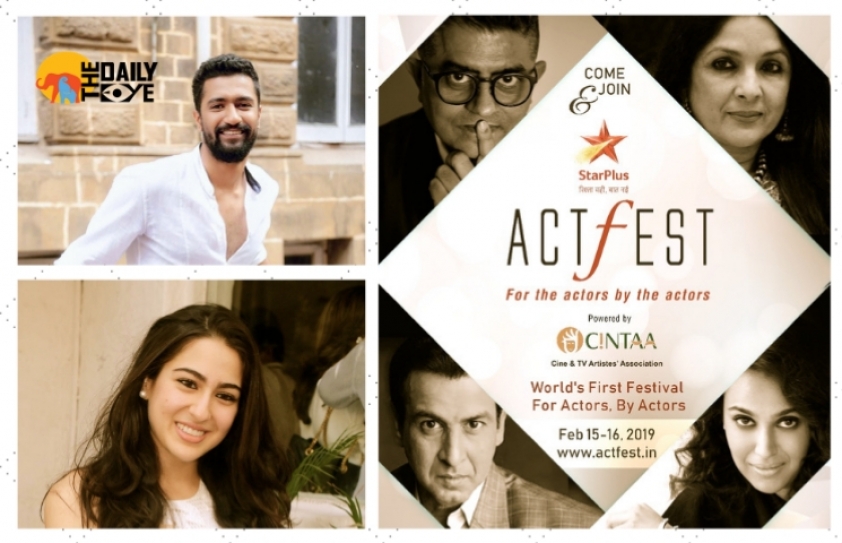 World’s first festival for the actors, by the actors.

On February 15 and 16, 2019 actors will descend in Mumbai for ActFest, the world’s first festival exclusively dedicated to Actors organised by Cintaa (Cine and TV Artistes’ Association). The festival is an action-packed knowledge series and features some of India’s most eminent and popular artistes participating in discussions, conducting workshops or giving lectures on various aspects of the art. ActFest is open to everyone and one can register on www.actfest.in. Star TV is the Presenting Sponsor of ActFest 2019, and the event is conceived and designed by The 48 Hour Film Project, India. It will be held at multiple venues of Shri Vile Parle Kelavani Mandal, Vile Parle (Mithibai & NM College campuses).

A grand opening will be held on Friday February 15 at 2:15 pm at the prestigious Mukesh Patel auditorium, Vile Parle. Renowned Indian theatre exponent, film director and actor Vijaya Mehta is the Chief Guest of the Opening Ceremony, while one of Bollywood’s newest stars Sara Ali Khan is the Guest of Honour. Bollywood’s latest sensation Vicky Kaushal will be the Chief Guest at the Closing Ceremony on Sat. Feb 16, also at the Mukesh Patel auditorium, and actor Jimmy Shergill will be the Guest of Honour. The rich experience of Vijaya Mehta, with inspiring talks by the young and talented Vicky and Sara and will inspire actors to keep seeking and enhancing their knowledge and never stop learning.

ActFest is a knowledge series for aspiring and professional actors to engage, share, discuss and enhance their skills and knowledge. The past glories, current trends and future prospects of the profession, will be discussed through panel discussions, lectures and Q&As. Workshops teaching the skills useful to actors are planned with the industry leaders. 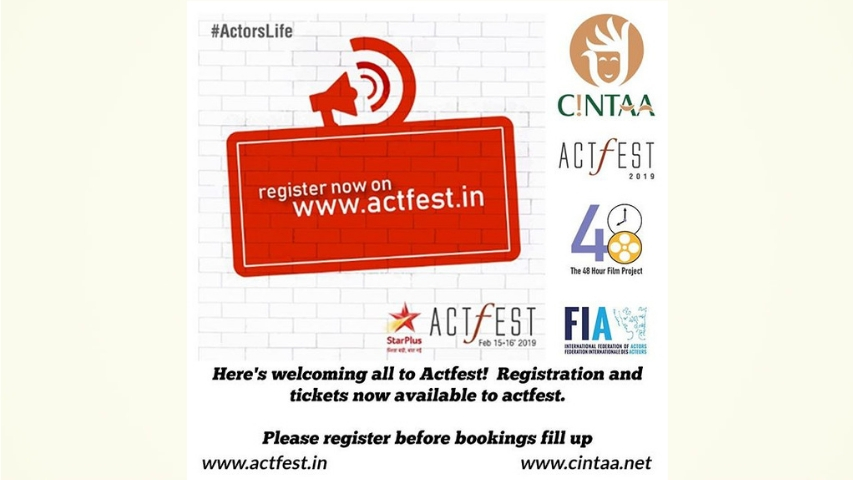 Speaking about ActFest and the tremendous support received from all quarters, Hon. Gen. Secy. Cintaa, Sushant Singh says, “We are very happy & grateful to Sara Ali Khan and Vicky Kaushal, two talented performers from today’s generation, who are gracing ActFest with their presence. It means a lot to all of us in the field of performing arts, their support to the ActFest is also a big morale booster to their association ie CINTAA.”

* Art of Acting by Rajit Kapur

* Dance by Ahmed Khan and Paulson

* Make-up and hair by Bharat and Doris

* Movement for actors by Deepal Doshi

A panel discussion titled, “Role of Actors in Changing the Narratives” will highlight the contribution of actors in influencing the ongoing discourse on issues related to health, sustainability and environment. The newer trends in entertainment like digital content and the changing face of comedy will also be the focus of other panel discussions. Film critics and actors discuss whether it's possible to find inspiration in criticism, while Rubaroo, a series of tete-atete talks with actors Neena Gupta, Rajit Kapur, Manoj Bajpayee and Ronit Roy will trace their interesting journeys into acting.

The event has been curated and created by Cintaa, jointly with the 48 Hour Film Project, an internationally renowned short film platform 140 cities worldwide. Speaking about the event, Amit Behl, Hon. Senior Joint Secy., Cintaa says, “We planned ActFest to celebrate the Actor, their art, journeys, highs and lows, and to let the world know of Cintaa’s zeal and commitment to uplifting the levels of the Indian performer.”

“Never before have so many respected actors come together to talk about their art and craft; it’s always been about the film, never the face of the film,” says Yogi Chopra, India Producer of the 48 Hour Film Project.

* Vicky Kaushal, Jimmy Shergill to be present for the Closing Ceremony

* Johnny Lever and his daughter Jamie to perform for the first time together on stage for the Opening Act on Fri Feb 15 at 2:15 pm