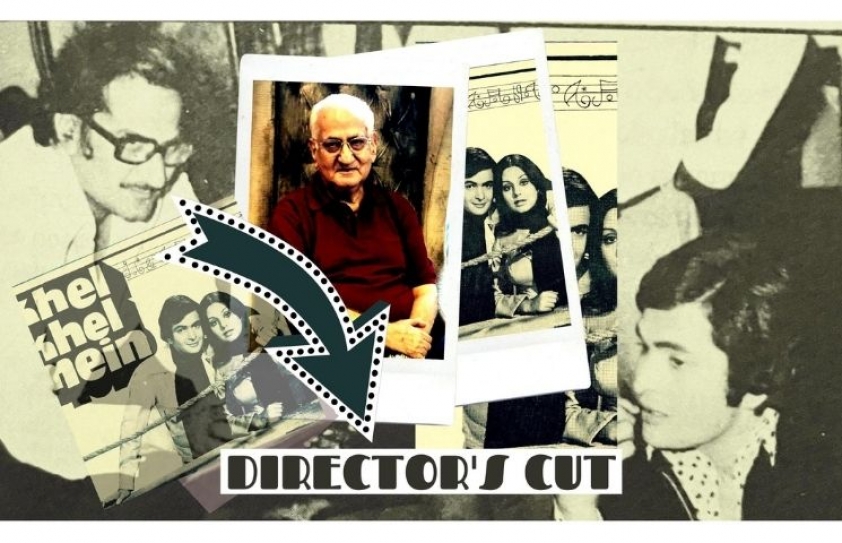 Film historian Dhruv Somani, pens a tribute to the late producer-director Ravi Tandon, who had kept a low profile throughout his estimable career.

Stalwart producer-director Ravi Tandon passed away recently at the age of 85. He was suffering from respiratory disorders. Over time, he had become more widely known as the father of actor Raveena Tandon.

It goes without saying that his contribution to Hindi Cinema, from the 1970s to the early ‘90s, cannot be ignored. A prolific hit-maker, he would cast the leading film stars of that era. He had a pleasant personality. On a lighter note, he would be called a mustachioed Jeetendra during his youth. He was identified with his soft-spoken manners and sartorial elegance.

He started off as an assistant director to R.K. Nayyar, Love in Simla (1960), for S. Mukherjee for which he had also helmed an important sequence, and had hoped that the debutante heroine would work with him when he would become an independent director. R.K. Nayyar gave him that break in 1964 with Sahire (retitled as Phir Wohi Shaam), starring Manoj Kumar and Nutan (who was replaced by Sadhana). Disappointment followed. After three reels were shot, the film was shelved for inexplicably. This was a trait with R.K. Nayyar; he would launch films and then shelve them whimsically.

To make ends meet he sold hydraulic door hinges for some time. By then he was already married to Veena (sister of actor MacMohan). There was a reversal of fortunes since Manoj Kumar had really appreciated his work and organized a film for him to direct as he strongly felt he wanted to save a budding director from derailment. The actor got him Balidaan (1971) with himself in the lead with Saira Banu.

Some four years ago, I was privileged to meet Ravi Tandon personally when he had autographed my coffee table book ‘A Touch of Evil’, in which I had covered two of his films, Anhonee (1973) and Khel Khel Mein (1975). Here's a tribute, then, to the low-profile filmmaker and some of his significant films. 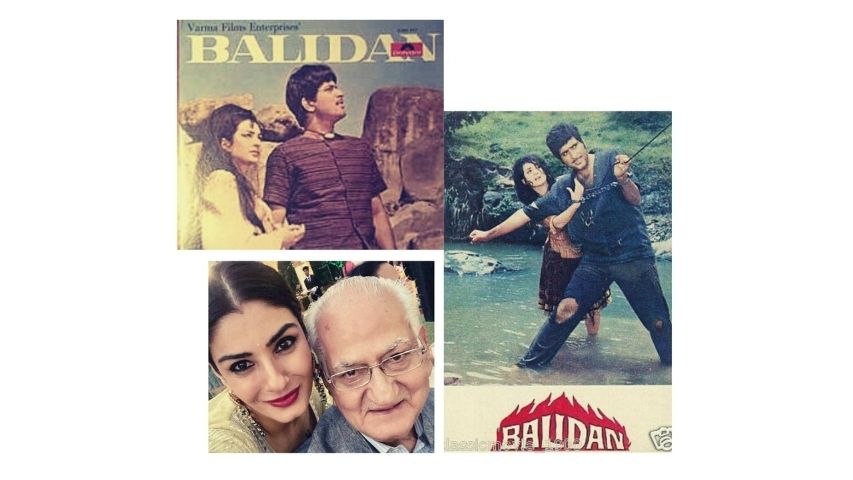 This dacoit drama with Manoj Kumar, Saira Banu, Dev Kumar, Bindu and MacMohan was formally his first film. Its music was provided by Shankar-Jaikishan. The plot was based on the fable of Robin Hood who loots the rich and gives to the poor. Manoj Kumar played the dacoit, while a smart police officer is assigned to capture him. It fared well at the box-office, and Tandon became a much-coveted director. 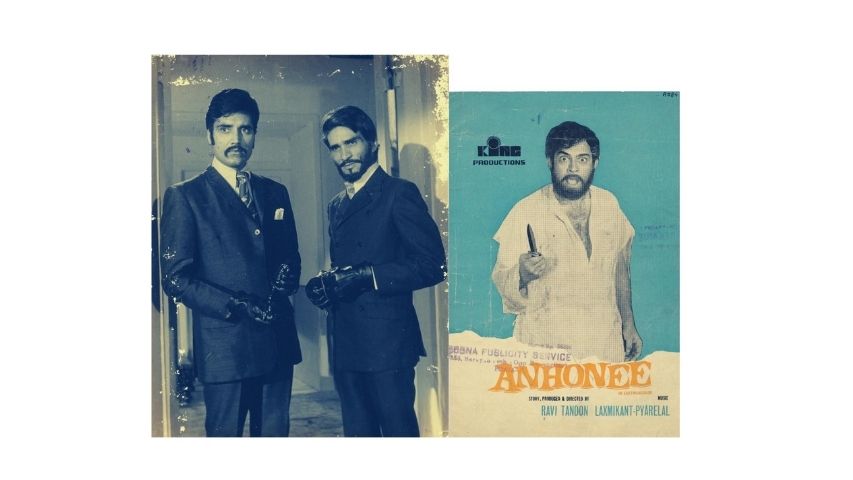 The plot revolved around Sunil who escapes from a mental asylum with a young girl held at knifepoint in a train, as a hostage, on a stormy night. The heroine, who happens to be a doctor, nurtures him towards recovery. However, the doctor keeps her dark past a secret from him.

There was an incident on the sets where Leena Chandavarkar reported late post-lunch. Dance director P.L. Raj had rudely commented, ‘Aap itna khaakar aayee ho to dance kaise karogi?” Leena had walked out in a huff and had wept copiously. Ravi Tandon had calmed her down and managed to extract excellent work from her. Anhonee also had the hit cabaret number Hungama Ho Gaya pictured on Bindu, which was remixed in Queen (2013) with Kangna Ranaut. 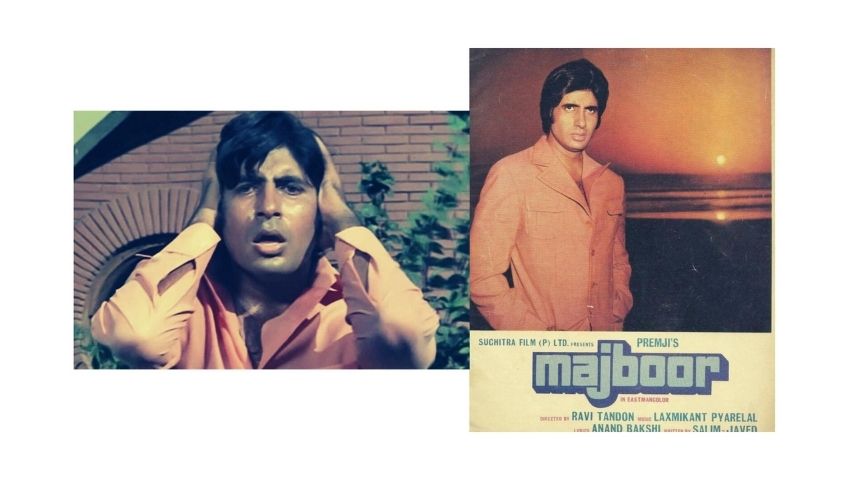 A crime thriller written by Salim-Javed starring Amitabh Bachchan, Parveen Babi, Pran, Farida Jalal, Iftekhar, Madan Puri, MacMohan and Rehman a in key role, the story centered around Ravi Khanna, who after learning about his terminal brain tumor fakes guilty of murder in lieu of his family’s debt, as he has only 6 months to live. The truth unfolds after a series of twists and turns. The music by Laxmikant Pyarelal was chart busting. Majboor made whoopee at the ticket counters and established the hit pairing of Amitabh and Parveen Babi. Zig Zag (1970), the action film, by George Kennedy, was the inspiration behind this film. 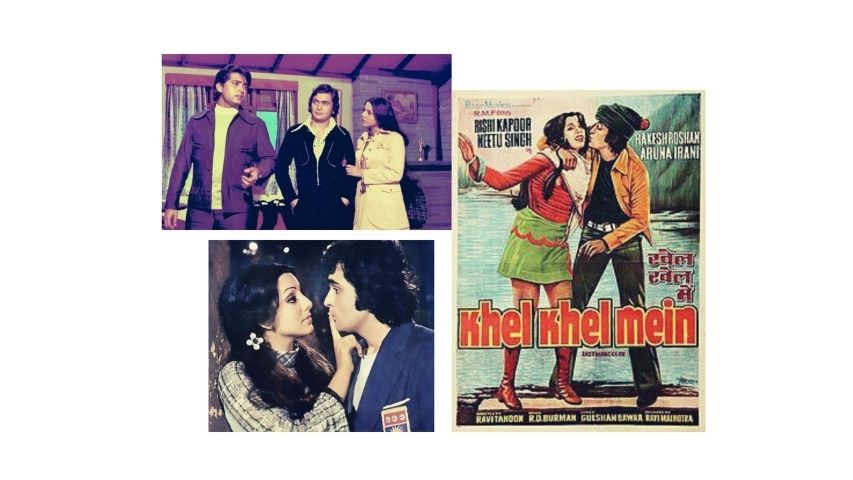 Ajay is a newcomer in Shimla and is often bullied by Vikram and his group. Vikram is a brat and loves to play pranks. They become friends after some scuffles. During one such prank Ajay, Vikram and Nisha get into deep trouble. They decide to go and confess their mistake to the police when suddenly Vikram is also found dead. They meet Vikram’s girlfriend Sherry but soon she is found dead too. Khel Khel Mein had superb rollicking music by R. D. Burman and a chilling plot, which made it a winner with the audience. The songs Khullum Khulla Pyar Karenge, Humne Tumko Dekha, Ek Main Aur Ek Tu and Sapna Mera Toot Gaya remain ever fresh. This was Rishi Kapoor’s big hit after Bobby. 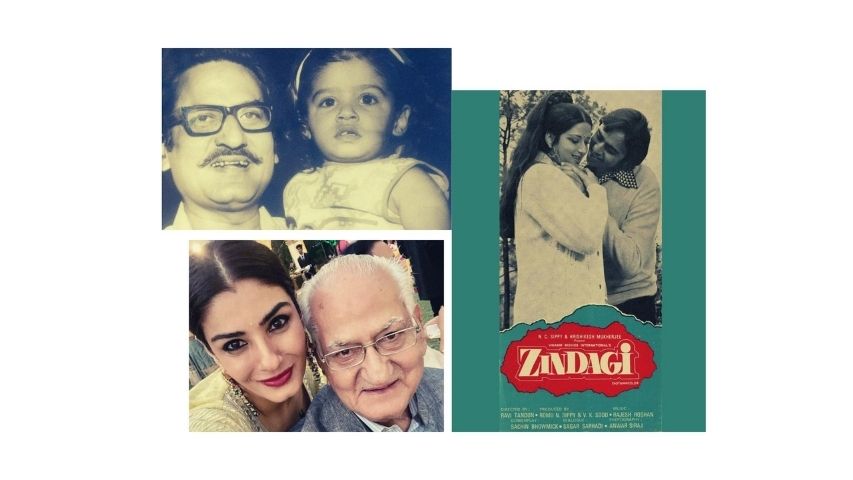 Mala Sinha, Sanjeev Kumar, Vinod Mehra, Moushumi Chatterjee, Anil Dhawan and Rakesh Panday comprised the cast of this family social drama. Raghu Shukl lives in a small town with his wife and children. Once Raghu decides to retire and clear his debts, his children decide to move on and separate their parents, who love each one of the two sons. Ravi Chopra’s Baghbaan (2003) was ‘inspired’ by the same plot. Even though Zindagi was emotionally touching, it failed at the box office. 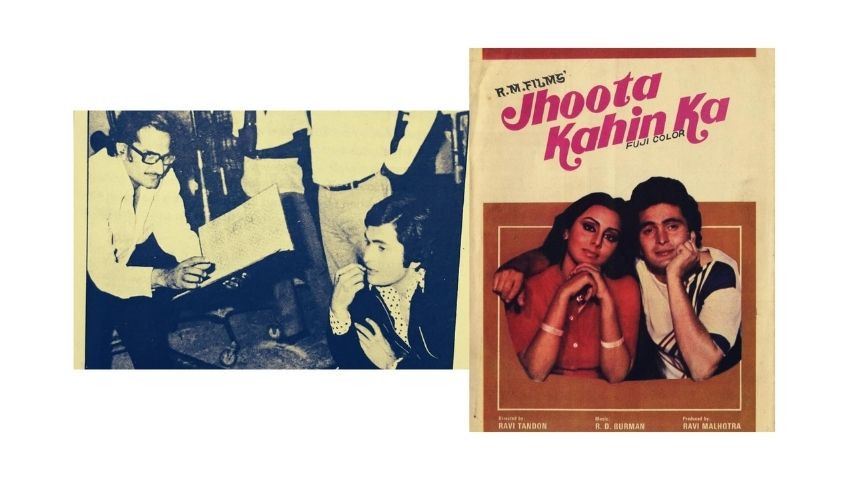 The feather-light caper had melodious music by R.D. Burman with popular tracks like Jeevan Ke Har Mod Pe, Barah Baje Ki Suiyon and the title track Jhoota Kahin Ka Mujhe Aisa Mila. The story is centered on the separation of the Rai family due to a storm in which their ship capsized. The son, Ajay, remains with the mother, while the father and Vijay get separated. Many years later, both the brothers fall in love with the same girl, Sheetal Khanna. The Rishi-Neetu jodi clicked again.

There is a back-story too. There was a showdown scene between the hero (Rishi Kapoor) and the heroine’s father, who is against the hero’s involvement with his daughter. The hero then telephones the heroine and tells her that he wants to marry her immediately if she too is willing to do so. Rishi Kapoor was a little reluctant to enact this scene and told the director “Uncle, aisa kabhi hota hai kya? How can two people just get married so fast?” The director was adamant and riposted, “Hamari film mein aisa hi hoga,” and they went ahead and did the scene.

Later, Director Ravi Tandon, Rishi Kapoor and Prem Chopra went to Delhi for the premiere of Jhoota Kahin Ka, which had also coincided with the actor Rajendra Kumar’s daughter’s engagement, for which the entire Kapoor clan was present. Suddenly, it was decided that Rishi and Neetu should also get engaged at the auspicious occasion. Rishi was said to have made a trunk call to Neetu and call her from Delhi immediately. That’s when the director reminded Rishi, “Ullu, aisa bhi hota hai!” 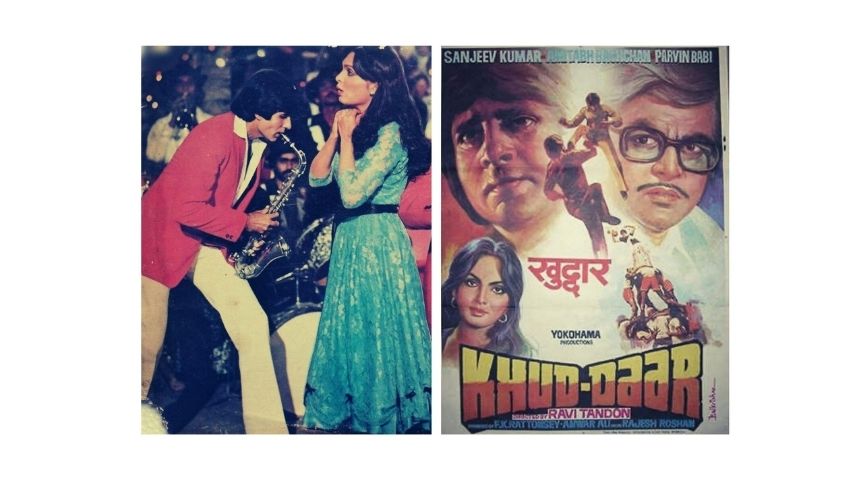 This was a big project for Ravi Tandon as it starred Amitabh Bachchan, Sanjeev Kumar, Parveen Babi, Vinod Mehra, Bindiya Goswami, Tanuja, Kalpana Iyer, Prem Chopra, and Mehmood. This one was a family drama, which revolved around brothers, Govind and Rajesh, who are brought up by their older stepbrother Hari. Hari leaves home for two months to complete his education. But his wife Seema forces Govind and Rajesh to leave the house and move to Bombay.

Govind, the elder one, takes on the responsibility of educating his younger brother Rajesh. To compound matters, Rajesh ends up marrying Manju Seth Verma’s daughter against the wishes of his brother and begins to live in their mansion. Follows a trap in which Rajesh is framed and arrested for drug smuggling. Now it is up to Govind to help his brother.

Khuddaar again saw the successful pairing of Bachchan with Parveen Babi who had replaced Rekha in the film. The original character was supposed to be a Goan Christian girl, which was later changed to a Marathi girl once Parveen stepped in. It also was the last film of Amitabh Bachchan with Parveen Babi, as she disappeared from the Bollywood scene thereafter. The popular song Angrezi Mein Kehte Hai Ke I Love You was partly written by Ravi Tandon’s wife Veena Tandon. The other songs too were appreciated and did well. 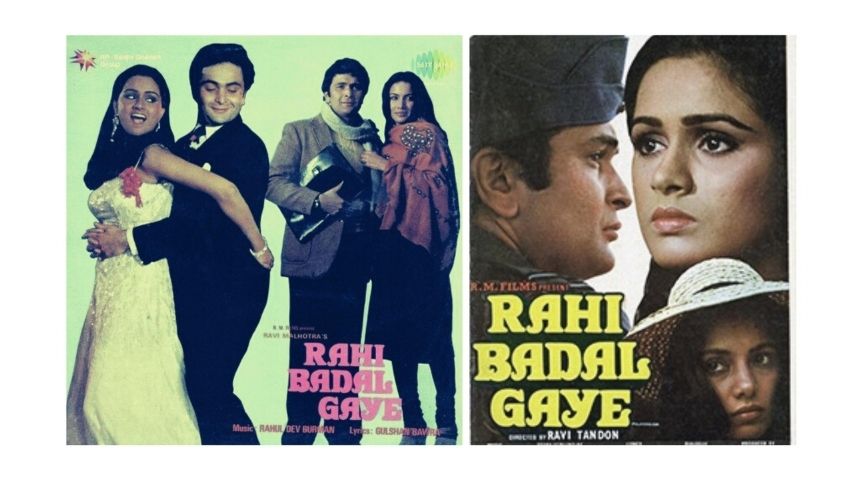 Starring Rishi Kapoor (double role) with Shabana Azmi, Padmini Kolhapure, Suresh Oberoi, Shakti Kapoor and Rajindernath, the script revolves around Amar who loves a local girl in Kashmir, Bhavana. She loses Amar in an accident and loses her mental balance until she sees his look-alike, Flight Lieutenant Pavan who comes to Kashmir on a visit. Dr. Mehra requests Pavan to help Bhavana recover and pretend to be Amar when he is around her. The film had catchy music by R.D. Burman. It was the only film where Rishi Kapoor starred opposite Shabana Azmi, besides a guest appearance with her in Tehzeeb (2003). 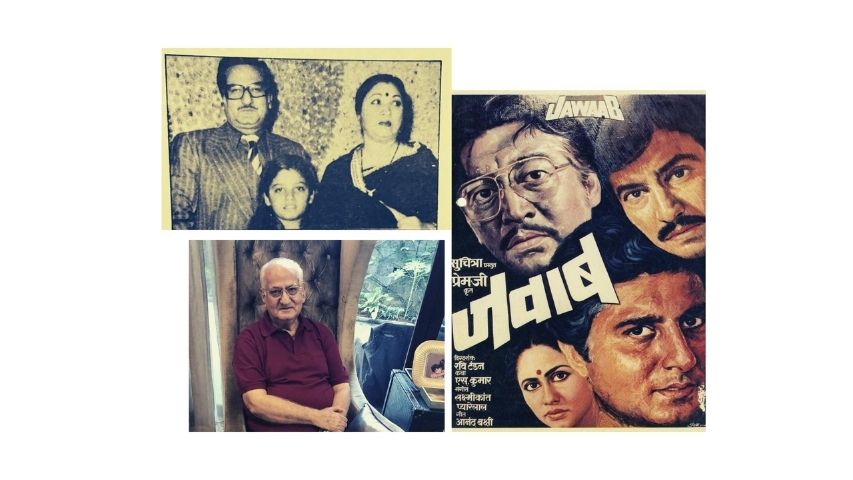 A thriller starring Raj Babbar, Smita Patil, Suresh Oberoi, Abhi Bhattacharya, Danny Denzongpa and Parikshit Sahani, the plot dealt with singer Ramprasad Singh who receives an envelope from a Mr. Mehta who is on the run from gangster Jagmohan. On the basis of the note in the envelope, Jagmohan is arrested and gets a jail sentence for two years. Next, singer Ramprasad and his wife Rajni and their son are remain under the threat of Jagmohan gang even after being under the witness protection plan and having changed their names and identities.

Finally, fed up of running and hiding, Ramprasad decides to come back to Bombay and get even with Jagmohan in his own way. Jawaab was an intense thriller with music by Laxmikant-Pyarelal and did well at the ticket counters. 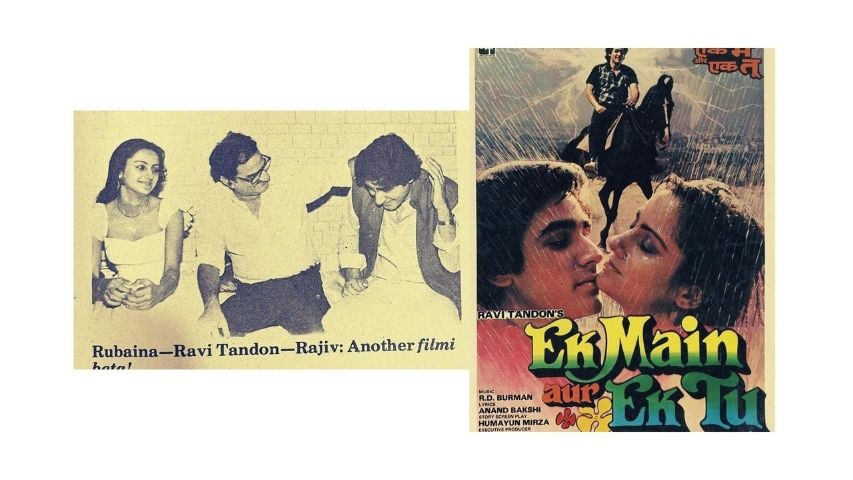 His face had a boyish appeal, his voice a youthful tenor and his talent was yet to receive a seal of public approval. His father, Ravi Tandon, launched him. By far his most ambitious project, Ek Main Aur Ek Tu was titled after the hit song from Khel Khel Mein. Raaj had assisted his father on Majboor, Khuddaar and Khel Khel Mein and had started receiving acting offers. He had enrolled in Roshan Tarneja’s acting classes before his grand launch opposite Rubina Kaur (sister of actress Ranjeeta) along with Shashi Kapoor, Tanuja, Ranjeet, Rajesh Behl, Shreeram Lagoo, Jayshree T and MacMohan in Ek Main Aur Ek Tu. A love story, with appealing music by R.D. Burman flopped calamitously, thus putting a full stop at his son’s career. 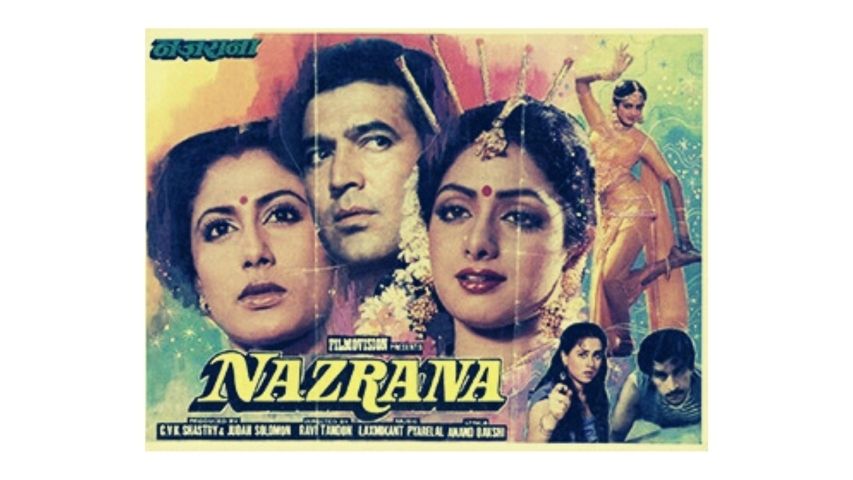 The director returned with this social drama starring Rajesh Khanna, Smita Patil, Sridevi, Preeti Sapru, Jayshree Gadkar, Shafi Inamdar, Ifthekar and Geeta Kak. Its plot was based on an extra marital relationship: Rajat and Mukta are a happily married couple. But Mukta begins to doubt her husband’s friendship with his business partner Sheetal Puri. The triangle is broken with the entry of Tulsi, the daughter of the caretaker of their house. Nazrana, with music by Laxmikant-Pyarelal, did well at the box office.