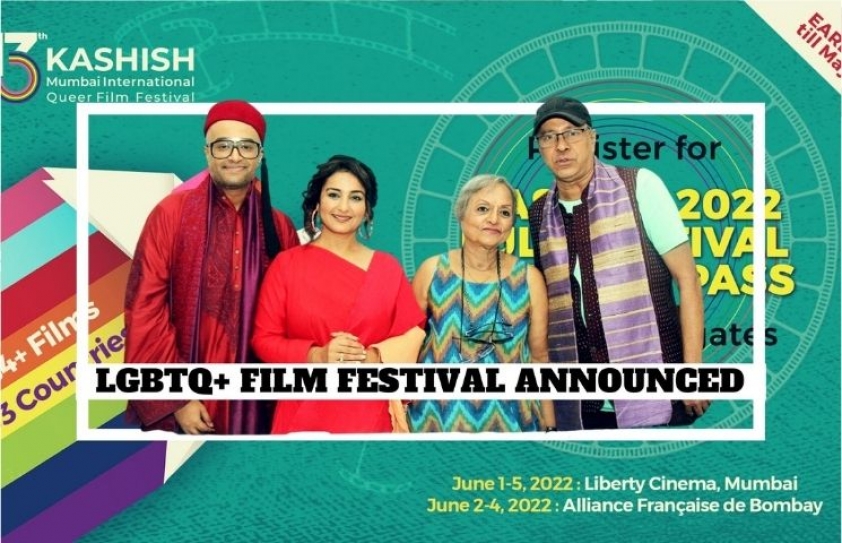 "I am happy to announce the 13th edition of KASHISH film festival. This festival which truly embraces and celebrates the LGBTQ+ diversity, has been a very special event in Mumbai, bringing together the LGBTQ+ community and their allies every year to celebrate the best queer cinema. This year in its physical avatar once again, it will be a great joy to celebrate our film Sheer Qorma with the audiences. I am eagerly looking forward to the festival", said Divya Dutta, National Award winning actor.

“It's an exciting time of the year, the KASHISH Film Festival that many of us look forward to. And thankfully it's going to be off line in Liberty Cinema, once again. The pandemic started the online option for Film Festivals and it’s great that KASHISH will have both so that people who are not from Mumbai can watch the films too. It’s also a shot in the arm for the movement in India, this year as there are going to be 30 Indian films participating”, said Aruna Raje Patil, National Award winning filmmaker and KASHISH Advisory Board member.

“We cannot even contain our excitement in bringing a physical edition after two years of online screenings. There is palpable euphoria in the air, and we sincerely hope that not just the LGBTQ+ community, but all film-loving audiences come to KASHISH to watch on the big screen some of the finest films from across the world. They happen to be about LGBTQ+ lives, but each film has great aesthetic value and technical finesse, and is bound to touch the hearts of everyone who watches it”, said KASHISH festival director Sridhar Rangayan.

KASHISH 2022 will be held from June 1-5th at Liberty Cinema and Alliance Française de Bombay; and also online from June 3-12th at http://online.mumbaiqueerfest.com.

In all, the festival will screen 184+ films from 53 countries in this hybrid edition of the festival. Among them, 30 films are from India, making it the highest from any country represented at the festival. Headlining the dazzling array of Indian films is Badhaai Do, directed by Harshwardhan Kulkarni and Sheer Qorma directed by Faraz Ansari.

“It is an honour and a privilege to be able to screen our film at KASHISH 2022, South Asia’s biggest LGBTQ+ film festival. We are humbled by this opportunity to present this film in front of this wonderful audience in the “month of pride”: We could not have hoped for a better setting and hope that our film can be viewed as a small contribution towards building a more humane and inclusive world, a world where laughter and tears happily coexist, as we continue our journey which has been paved with love and sacrifices of our people. A world where love is love - nothing more, nothing less”, said Harshavardhan Kulkarni, director of Badhaai Do. 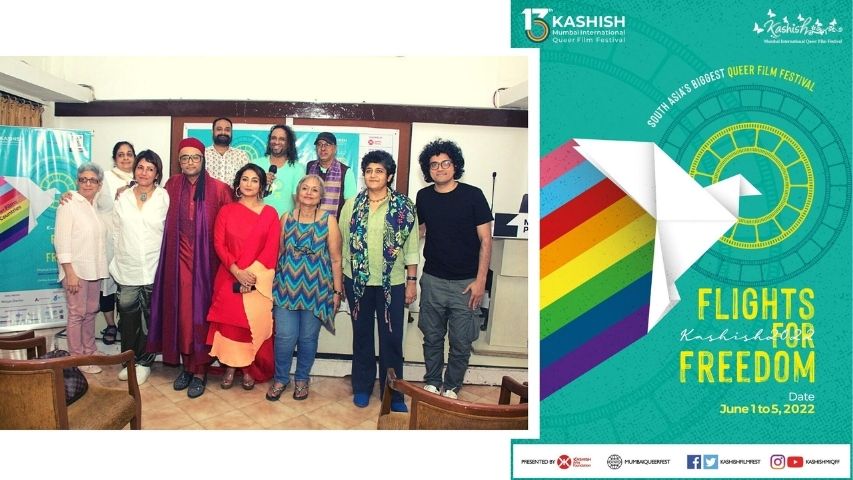 “From being one of the members of the audience at KASHISH, to being the director of the Centerpiece Film with Sheer Qorma - this is going to be so truly special for me! There is no greater joy than watching it on the big screen with a packed house. For a film that was born, conceived and filmed in Mumbai and to finally screen it at Liberty cinema where I grew up watching films, I am so looking forward to it!”, said Faraz Ansari, director of multiple award winning film, Sheer Qorma.

It is an honour to be invited to be part of the Narrative Jury for KASHISH 2022. I was excited to see the conversations in the LGBTQIA+ world expand into newer explorations, thoughts, desires and expressions in the shortlisted films. Each film we watched deserves to be showcased on popular platforms as the dialogue they provoke comes from and affects society at large. Thank you KASHISH for creating this stepping stone for these voices and films. “Flights for freedom” - the festival’s theme this year says it all!

Being on the KASHISH narrative jury was a heady deep dive into queer landscapes and possibility. Moving between ‘what is’ and ‘what can be’, the films not only reflect diverse queer experiences, they also excitingly imagine and offer multiple ways of living and being to all people – perhaps the essence of queer politics. What really struck me as well, across films, was the pattern of beautiful assertion by a younger queer generation who refuse to stigmatize themselves despite the continuing approbation of ‘mainstream’ society. It has been an absolute pleasure to engage with these films so closely.

Being a jury at KASHISH is nothing short of a privilege for a young filmmaker like me. More than cinema, art and form, I was educated on empowering journeys and compassionate stories from so many countries. The layered representation of human emotions, the varied intersectional spaces and the heartwarming performances encouraged me to expand my worldview and storytelling skills. I am truly indebted to the film festival. 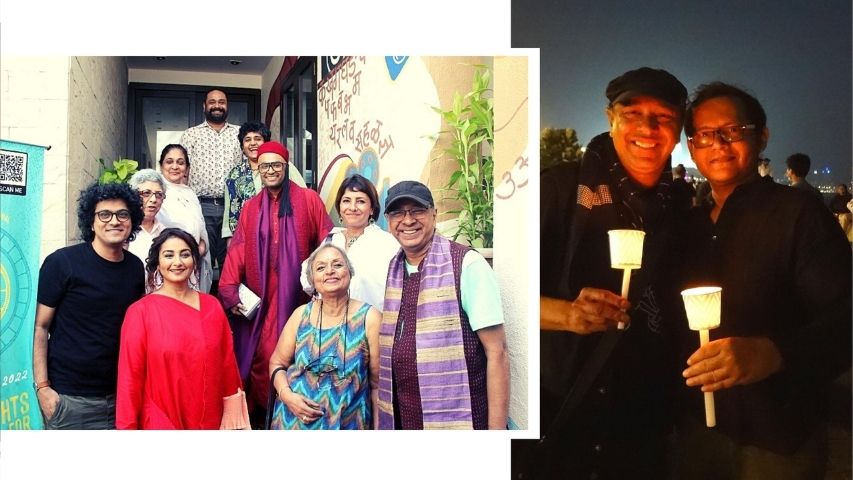 Witnessing the high quality of candidates in the Riyad Wadia award for Best Emerging Indian filmmaker category year after year clearly demonstrates how Riyad’s brief trajectory has left an enduring legacy that’s opened the door for so much talent and originality to follow.

KASHISH is one of its kind of festivals in India. The organizers do a brilliant job of getting films from across the globe that are carefully curated. The film festival stands for representation for all the queer voices from India and abroad. Being a jury in the non-fiction section was a difficult job, since all the films that qualified were fantastic. It was a delight to witness such diverse range of content coming from various pockets of queer lives. I am looking forward to watching the programming brought together by the KASHISH team.

KASHISH is one of the largest LGBTQ + film festivals in South Asia and is doing wonders to encourage the LGBTQ+ community to express their creativity. My experience as jury for KASHISH film festival 2022 has been wonderful. I wish KASHISH all the best for many more such amazing years to come!

As a jury for the Documentary Films Section, I am amazed by the diversity of themes and topics. The films touch upon relevant, contemporary issues of the Queer movement.  The engaging characters have kept me engrossed, sharing their lived experiences and stories.

As a first time jury member of the prestigious KASHISH Mumbai International Queer Film Festival, I was completely bowled over by the quality of films by the students. As a film buff myself, I have seen the influence of cinema in my own life and those around me. It therefore is extremely heartening to see such thought-provoking content. To me it demonstrates the changing face of society and the readiness of our youth to create and influence unabashedly. I have learnt through this process personally. KASHISH is raising the bar each year.

I am very excited to see how students from across the world are interpreting queerness, giving both vision and voice to desire. It is an honour to be discussing and deliberating with my fellow jury members over their ideas. KASHISH has always been an extremely welcoming space to subversive filmmaking soaked in queerness, and this year won't be any different.

I am honoured and delighted to be amongst such wonderful people on the jury team to view and judge the student short films at KASHISH this year. It has been a refreshing experience getting to view a truly diverse selection of student work from art and film schools ranging from Taiwan to the UK, Hungary to USA. I always find student films very exciting to watch. They are fearless, they are bold, they are frivolous and do not yet bear the burden of the appeasement and calculation that makes cinema very formulaic and calculative. The films made by these young minds all show great promise, and I wish each of the participating filmmaker(s) the best of luck and hope that they continue making films with the same fervor in the times to come. I am looking much forward to being present at the festival!

Registrations for the physical festival are open at https://www.instamojo.com/KASHISH_MIQFF/

More details about the schedule and programs can be viewed at http://mumbaiqueerfest.com