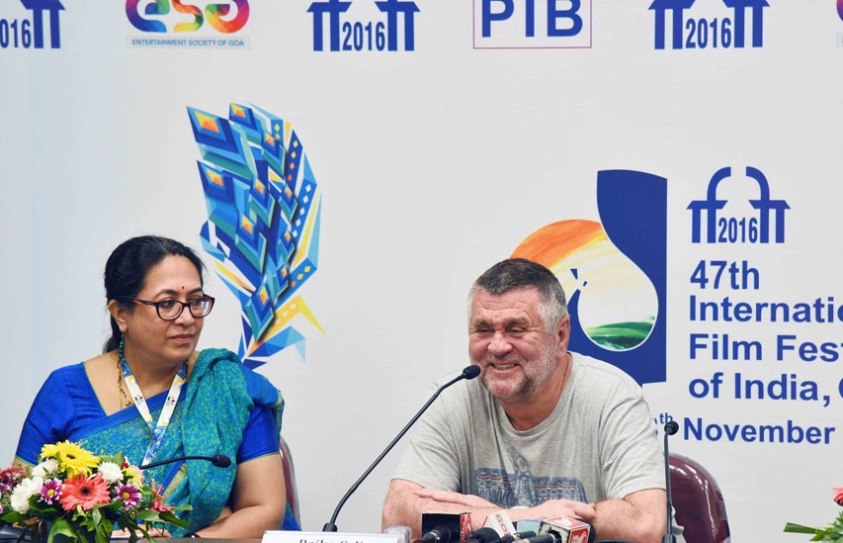 Films communicate on an Emotional Level and bring about a change in the way people think: Rajko Grlic

The Croatian filmmaker, Rajko Grlic, met the media at the 47th IFFI, 2016 in Goa today. His Film ‘The Constitution’, was screened at the Film Festival.  The filmmaker was invited by the Directorate of Film Festivals (DFF) to the IFFI to deliver a Master Class Lecture on Film Making. He is a recipient of numerous awards like Golden Arena for Best Director, Tokyo Grand Prix. His film Bravo Maestro has been nominated for Palme d’OR in the Cannes Film Festival.

While addressing the press conference at the IFFI, said that according to him, films cannot bring a change in the society, but they are made to build a strong connect with the audiences and communicate an important message at an emotional level.

Responding to a question regarding the impact of films on the society, Mr. Grlic said that he makes a film only when he wants to tell a story and if his work brings about a change in a few people around the world, then it is more than good for that one film.

Commenting on the difference between art and commercial cinema, Mr. Grlic said that he believes that there are no categorizations, because everyone is trying to tell their story and the way a story is being told and the reason why it is told brings the difference.

The Director believes that every film needs an audience and it is the beauty of the story that attracts the audience. Furthermore, he added that Croatian language is spoken by a very small population, so it is very hard to commercialize Croatian films across the globe.

Speaking on his film, ‘The Constitution’, Rajko added that it was his 12th feature film and was opened 2 months back in Montreal and is currently screening in 8 European countries with a great audience response. The film is a love story about hatred of four people who live in the same building, but never talk till certain conditions arise that compel them to communicate.