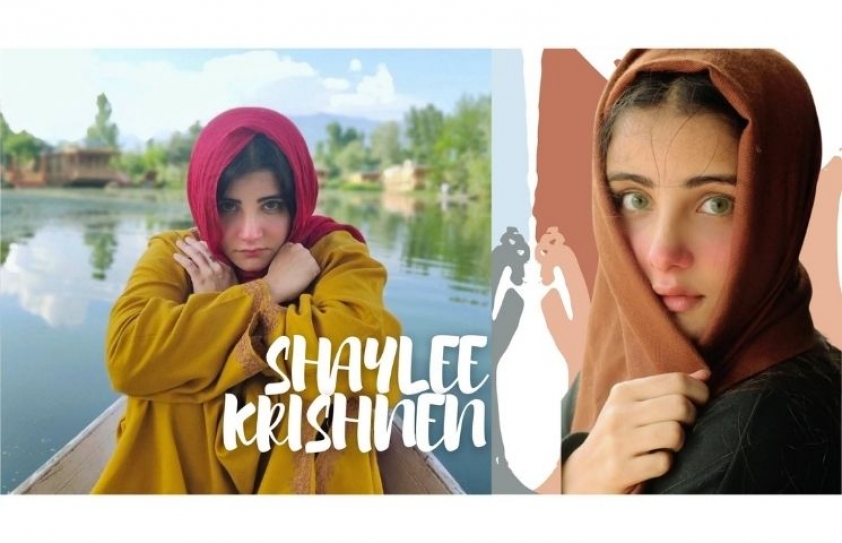 Khalid Mohamed in conversation with the feisty actor, Shaylee Krishnen, who spent her childhood in camps of Jammu and Kashmir, and has featured in projects of Santosh Sivan and the Oscar-winning Asif Kapadia.

Till she was nine, she knew no other life than that of refugee camps on the Jammu and Kashmir border.

Shifted from one camp to another, which were tents or “like big boxes” where she was born, she says, her landed family of Kashmiri Pandits had to flee their palatial mansion in Janglat Mandi on the intensifying of terrorist attacks.

Shaylee Krishen, now a 23-year-old actor has portrayed the leads in Santosh Sivan’s Moha - on  the journey of a lost princess, which was also shot in virtual reality - and the Oscar-winning Asif Kapadia-produced web series The Last Hour (Amazon Prime).

Surprisingly stoic about the ceaseless traumas faced during her childhood, she has been told stories about her grandfather’s three-storey mansion with a flower-laden garden and fields surrounding it. Chief of the district, her grandfather was reluctant to leave his birth-home but at the peak of terrorist outbreaks from 1986-’89, there was no option but to quit empty-handed.

“I’ve heard stories that girls would be abducted,” she states. “My father, Maharaj Krishen, was in charge of running the family business. He’s a handsome Kashmiri man - most Kashmiri men are. My memory begins at the camps, which were very unhygienic, often without blankets and adequate ration supplies in the crippling winter. Ma had to stitch blankets and make mattresses out of ration gunny sacks. Since I was growing up, and that too rather fast, men would gape at me. Dad  had to get my ma, Jeeta, my elder brother, Aditya, and me out of there somehow.”

Next: the family moved into a small rented home in Udhampur assigned by the bank where her father had located a job. Her mother would weep at the market, the fruit and vegetables, which she had to buy she could once pluck from her own gardens.

Shaylee Krishen’s story of her transition from a refugee to stardom could indeed be a subject for a novel or a film. As I chat over the phone with her (she’s currently in Bengaluru with her brother), I can sense that she has come to terms with the shocks and deprivations of her childhood.

There isn’t a trace of bitterness or regret though, because, as she puts it, “I used to think everyone lived in such camps, and I was blessed because of the presence of a radio on which I’d keep listening to the vintage songs of Lata Mangeshkar, Mohammed Rafi, Kishore Kumar and so many more. I’d keep humming Lag Ja Gale, and was entranced by A.R. Rahman’s songs of Dil Se, and kept imagining how they had been performed.” 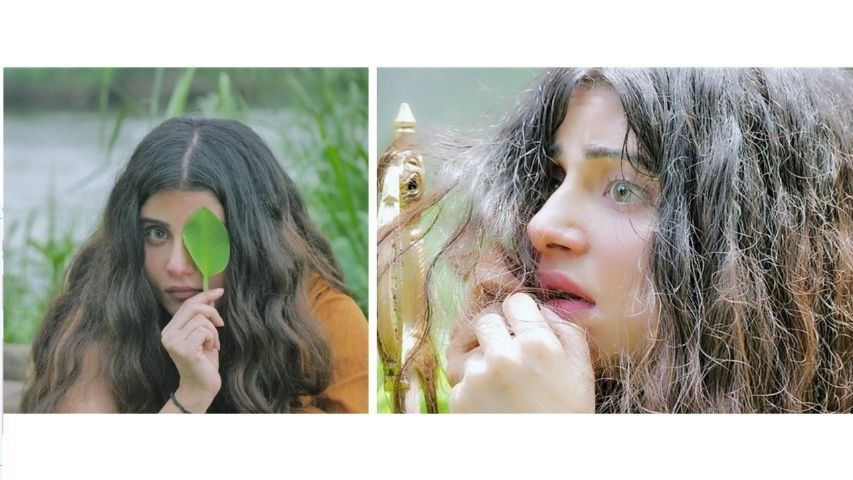 In Udhampur, between Jammu and Kashmir, Shaylee saw Mughal-e-Azam, and would practise the kathak steps of Madhubala, alone in a room. On moving to Bengaluru, she was taken aback that the people looked so different than they did in Kashmir. Just consider you’re the odd one out,was her father’s advice. In the city, she saw films for the first time on the screen.

Among them was Santosh Sivan’s Urumi, a 16th century saga of palace intrigues, in Malayalam. She couldn’t understand a word but was mesmerized by the visuals and partook of the applause of the audience. “I was literally sitting like a monkey,” she remembers. “My legs folded on the seat and watched with wide open eyes. In fact, I saw Urumi twice because of its gorgeous visuals.”

Her friend’s brother worshiped the cinematographer-director and aspired to work with him. On an impulse, with the family’s permission, Shaylee took off with the friend to Kerala in search of Santosh. A con man, there, promised to  arrange a meeting at the cost of Rs 20,000. “I broke my piggy bank, handed over the money - we were told that an appointment had been firmed for the next day. But what do you know? It was canceled,” Shaylee laughs. “I was so disheartened that I borrowed the friend’s camera and told him that I’d show Santosh sir what he had missed. The untitled short was based on the premise of a girl’s eyes which turn from black to a beautiful gray. No one understood it.”

While completing her school education, the noted photographer Ravi Varman, shot her candid stills. Shaylee made another short film, an abstract one.

On seeing the stills and the short, “sir is the only one who understood it”, she says, Santosh and the backing American studio said that she’s the one for Moha. “I always had a hidden fantasy to be in a movie,” she continues. “When I tried I had failed, but then Santosh sir became my mentor, he even told  me my craft resembled that  of Ida Lupino, a British actor who worked mainly in America. He made me watch a lot of world cinema, and educated me in cinema before I faced the camera. Incidentally, I will also be in sir’s upcoming Jack and Jill, a sci-fi adventure, with Manju Warrier.”

Next: How did the Asif Kapadia-piloted series, a supernatural crime thriller directed by Amit Kumar and Anupama Minz, materialize?

Animatedly, Shaylee recalls, “I’d made another short, titled Scissoring and had sent it to the festival circuit. It was about same-gender love between two women and had a twist in the end. Asif Kapadia’s team saw it and located me after two months. At the outset, I wasn’t sure if I should do a series, but Santosh sir said, ‘Are you a mad silly girl? It’s an offer no one else would refuse.’” 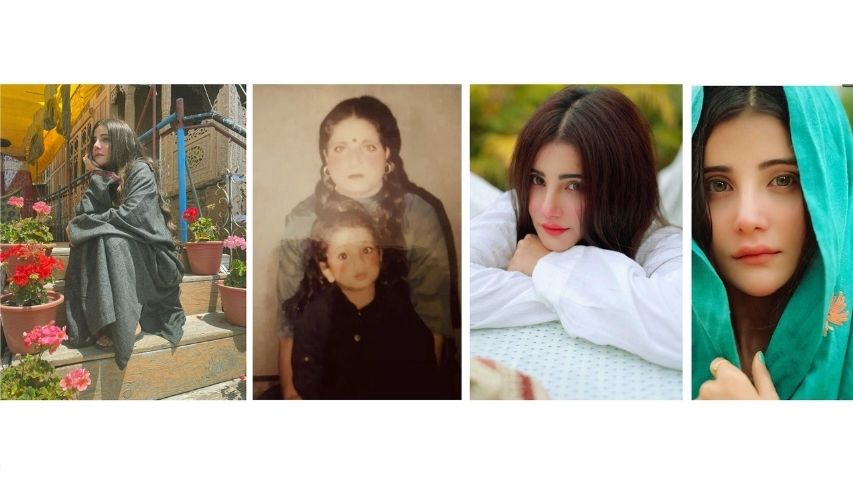 Asif Kapadia, most famously known for the Irrfan Khan film ‘The Warrior’ and the Oscar-winning documentary Amy (on the late singer Amy Winehouse), Shaylee says was thoroughly chilled-out on visiting ‘The Last Hour’ shoot in Sikkim: “He had no attitude at all. He asked me whether I had seen myself on the video monitor after performing the shots? Am I happy? And when we attended the premiere of his documentary Diego Maradona at a Mumbai multiplex, he actually asked me, ‘Are you liking it? What do you think of the last hour?’ That was humbling, imagine him asking this of a newcomer and that too, a girl. Like it or not, in my experience directors never deign to ask women their opinion.” She should know.

Because after the shoot of her next film, a Malayalam one, its veteran National-award winning director wouldn’t brook any discussion. Shaylee had asked him about some implausibilities in the script. Result: she was dropped from the project, without the courtesy of even being informed.  “Still, that was hardly a jolt,” she  asserts. “As a child from the refugee camps, the traumas overcame there, must have invested me with an inner strength.”

Since she has been making short films, does she intend to become a director? To that her frank response is, “I just love cinema, it’s my calling. I will become a director-producer some day for sure.”

Elaborates she, “ I would like to think that I’m a very visual person, I’ve imbibed the technical knowhow on the sets, especially about the shot takings, sound, editing and the lighting. The film I long to direct and act in myself would be something on the lines of the series Fleabag or Killing Eve, which are about real women, recognisable but hang on, I can’t think of a self-indulgent vanity project for myself. On the global platform of streaming channels you can’t be abstruse or vague. There has to be that magic combination of sense, sensibility and commerce. Content has always depended on business, and always will. Which is why films like Dabangg and Pushpa are a must. In this context, sab ke haath bandhe hue hain.”

Uh huh. Would she do a Kashmir ki Kali? “Two hundred per cent. I’d love to be Sharmila Tagore,” she exults. “It’s such a relaxing film. Shammi Kapoor was so stylish, a sheer delight. However, is anyone making such entertainers anymore? To be honest, I don’t think I could ever portray a typical girl-next-door though. As for glamor, I’m all for it - not the Student of the Year or Race sort but something more believable like Hollywood’s Priceless and Pretty Woman, or the Manisha Koirala role in Khamoshi: The Musical and Sridevi in Sadma. And you know what? I’d break into cartwheels if Salman Khan ever made a sequel to Bajrangi Bhaijaan. The small girl whom he rescues and returns to her home must have grown up by now. I even resemble her.”

Clearly, Shaylee Krishen is prone to fantasies. Felicitous, she is grounded in reality too, which she refers to as “log toh roz hi dekhte hain.” Bollywood has already snowed her with roles. So, why no announcement yet? Without demurring, she informs that she has been signed up for a topline project but the pandemic has caused delays.

Something tells me Shaylee doesn’t have to be in a tearing hurry. Her strikingly natural beautiful looks and a balanced approach, towards cinema and life, affirm that she’s on the right track. Tell her that and she ripostes, “Without those nine years at the refugee camps, who knows? I could have succumbed to the usual show business tactics of that quid pro quo, you know, behind closed doors.”