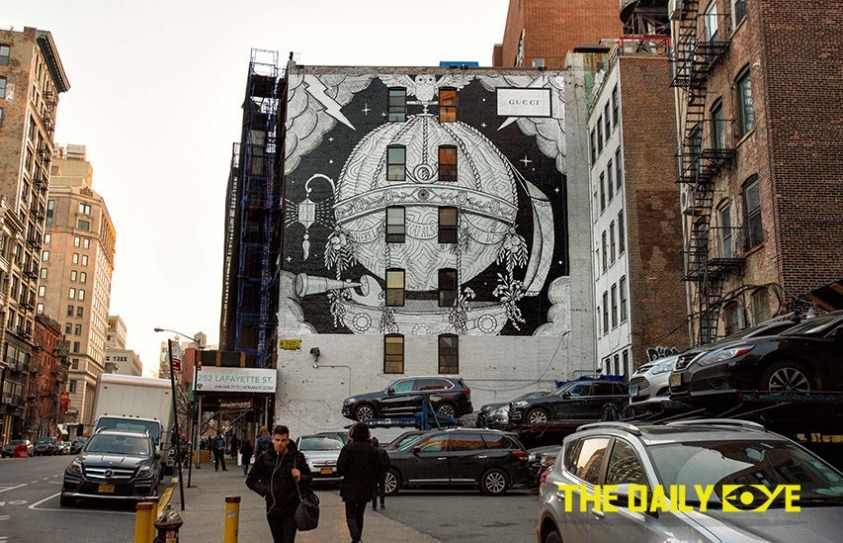 The past few years have seen a shift in the face of marketing, with advertisers harnessing the addictive power of social media to publicize their brand. The newest addition to this phenomenon is the art of mural-making, with brands commissioning wall and graffiti artists to create what have been termed as 'Instagram' walls in a bid to boost recall value.

Instagram, owned by Facebook, is a social media application that lets a user share and comment on pictures that have been made public for viewing by their connections on the app. Hitchhiking on the app's popularity, several companies, especially fashion houses invested in photo-campaigns with the walls as background. This, accompanied with well-placed endorsements by celebrities guarantees thousands of views, and has even attracted excited fans to the walls.

The case of Paul Smith's exterior wall. The store is already a recognizable landmark in the area for its bright pink wall with a trending Instagram hash tag (#pinkwall) that people pose against. The Melrose-pink wall was converted into a rainbow-coloured extravaganza as part of an international Pride project with Instagram. Public figures such as Hilary Kerr, actress Victoria Justice and LA mayor Eric Garcetti clicked and posted pictures in front of the wall. The impact was overwhelmingly positive; there was also an immediate impact on the foot traffic and sales of the brand.

Over the last few years, retailers such as Adidas and Gucci have commissioned several such murals- promoting art and ad together. Adidas's video with Kendall Jenner in front of a mural attracted more than 7.9 million views. The brand also relied on Instagram during its three-week project in Brooklyn to promote its Pure Boost DPR shoes; at last count the hashtag #pureboost saw 1,10,712 Instagram posts from individual accounts.

Brands, from Givenchy, who featured model Candice Swanepoel with a mural in their ad campaign, garnering 2,00,000 likes; to the Kooples; Chanel, who, with Lily Rose-Depp and the #ilovecoco hashtag generated more than thirty thousand views to Gucci's 'Art Wall' project which features a rotating crop of artists; several have realised the potential of the tag.

Brands marry wall art to the virtual world by including hashtags on the wall to bridge the analogue-digital divide. The question does arise if such campaigns actually boost sales, or only contribute to increasing the recall value which, in a world of constant updates, might just stay fleetingly in public memory. However, Gil Eyal, chief executive influencer of marketing platform Hyprbrands says that social impressions are powerful because they establish a relationship without feeling like promoted content.

Colossal Media, a New York-based company helps brands advertise by commissioning murals. It owns a 2500 sqft space in NY's Soho, which currently, is hosting Gucci's Art Wall. “When a consumer sees our walls, they think art first, ad second and are drawn into the brand message,” explains Colossal Media managing director Kelly Peppers, who says fashion is the company’s fastest-growing vertical. An early project for Barneys in 2009 was ‘a turning point’, she says, in that it demonstrated that hand painters could create ‘photoreal’ ads with models. Vans, H&M, Comme des Garçons, Desigual, Armani, J. Crew and Cole Haan followed suit, but since the Gucci project, she says, “the phone has been ringing non-stop.” The company currently has rights to paint across seven locations in the states.

Rag & Bone is another such service provider. “It’s nothing to do with marketing… it’s just something that makes the neighbourhood a more inspiring place to be. It supports the arts and that’s incredibly important at the moment,” says Rag & Bone chief executive, founder and creative director Marcus Wainwright. “It’s not about how much it costs versus a traditional campaign, because there are completely different end goals. They work on street art, with artists pitching in ideas for the wall and the brand paying the expenses. The artwork changes monthly to keep alive the culture of wall art prevalent in the city. As the art becomes popular, customers often request shirts and prints, which they sometimes develop.

Whether this online popularity translates into actual sales is debatable as Instagram does not give traditional feedback such as number of views and audience demographics. However, it is heartening to see this surge in popularity of an old medium- mural making, thanks to that of a new one- Instagram.