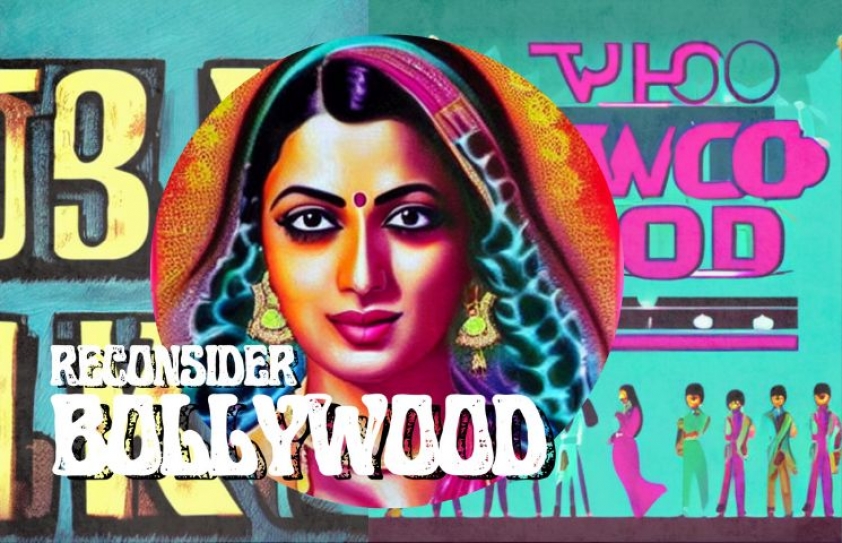 Monojit Lahiri does a close–up of this tricky issue and reaches out to the readers now for a solution to the word Bollywood.

For some time now, the name, term, insignia label, epithet, tag, title, moniker Bollywood has been residing vicariously, in the eye of a storm. Stars, directors and others led by the towering inferno Big B and now followed by Salman Khan have voiced complaints about the name being a joke, an insult, demonstrating slavish mimicking of an industry that has clearly overtaken, in terms of movie output eyeballs, glamour, pull and exciting, colorful, mass attraction the Hollywood. While no alternative name has been suggested, this august group continues to believe that the name Bollywood is indicative of imitation, something that (with its recent global draw) is degrading and needs to be rectified asap.

A quick flashback on how this name came about is in order. Contrary to popular belief the term did not emerge out of thin air, the spasmodic working of an underpaid scriptwriter’s overheated imagination but directly inspired by Tollywood, the name referred to West Bengal cinema way back in – hold your breath guys – 1932. Yup, you heard right.

At that time, Kolkata (West Bengal) was the center of Indian Cinema with studios booming with activity. This chance juxtaposition of two pairs of rhyming syllables Holly and Tolly led to the portmanteau Tollywood which went on to describe cinema of that region, fashionably promoted with verve and style later in the early 1970’s by Kolkata’s iconic youth magazine Junior Statesman (JS).

The term Bollywood has its real origins in the 70’s when we zoomed past our big dad Hollywood’s number-count and became the Numero Uno in volume. Credit for the term has been claimed by different people, including Reliance Entertainment head Amit Khanna and journo Bevinda Collaco.

The sudden touchiness about the B name never ever existed in the seventies or eighties, even nineties, except the odd voice, which sang, croaked, screamed and died in the wilderness. In short, no one took it seriously and in fact, there was general comfort at the Mumbai’s ‘Masala Film Biz’ actually getting a brand name.

Amitabh Bachchan’s was the first big, booming and major voice registering protest. His point was that the name instantly mimicked Hollywood and automatically gave the industry secondary status. Even today as Bollywood goes global as a major force across all hi-ticket forums, this name sucks; stinks of mockery and Hollywoodian-awe.

Sallu bhai has joined in with his growl. Cool with Bolly but un-cool with Wood, the hunk offers an interesting alternative - Hi-Fi, which denotes Hindi Film industry. Like Bachchan, he believes that the B word appears to be a corny clone and is both insulting and disrespectful of an industry, which boasts of the largest number and remains a dedicated provider of joy and entertainment to countless fans across the globe.

Director Rakeysh Mehra (Rang De Basanti) joined the chorus but with a different refrain. His resentment seems to stem from the ‘random application’ of the B tag to movies and directors, which has led to a loss of identity. His material, he believes, is different from what Bollywood stands for - music, dance, melodrama, glamour, stars, exotic locales, item numbers - and hence is misleading and confusing.

As I write, a slew of other industry folks – afraid to lead but very comfortable to follow – have also chucked in their hats into the ring, with tons of diverse reactions coming through the social network spectrum.

A Bollywood fan says, “We manufacture a kind of product that is deliciously hybrid, totally unique and resonates big time wherever shown. It is also completely different, special, rooted and made-in-India, so it’s high time the patronizing and copycat name Bollywood is slung out and replaced with something that defines the individualistic, colorful dramabazzi stuff we dish out to zonk the world. I am sure Javed Akhtar or Prasoon Joshi will be able to coin a term that blends the best masala with the best of mainstream cinema, something unapologetically commercial, escapist and fun.” 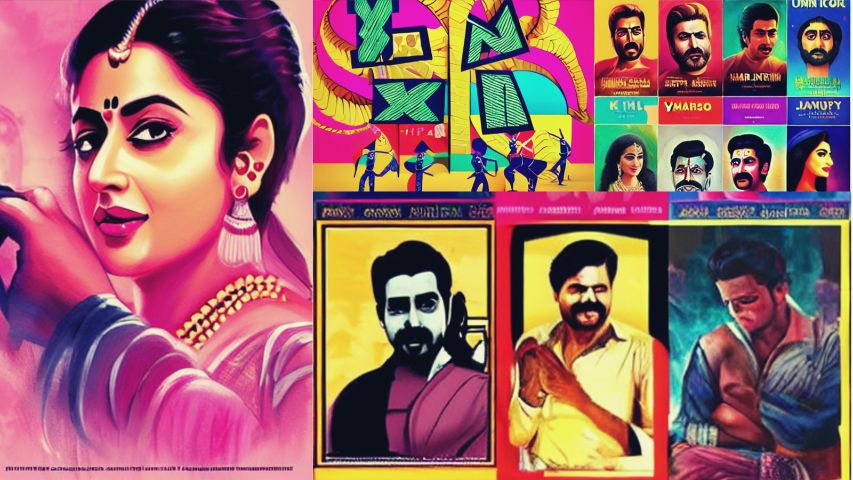 Film scholar, historian and critic Rauf Ahmed confesses, “I remember Southern Superstar Kamal Haasan and later Amitabh Bachchan voicing protests years ago; the issue also came up at a film seminar and now a chorus of people joining this scrap-the-Bollywood-term movement… What can I say? While I agree theoretically with Kamal and Amit that it does sound copy-cat and country cousin-ish and therefore, perhaps, presents a poor picture of our gigantic Film Industry, these are occupational hazards and come with the territory. We live in a world of short-cuts, nick-names and slang. Are Bebo, Kat, Piggy Chops, Dips or Bips tags to replace Kareena, Katrina, Priyanka, Deepika and Bipasha? They’ve caught and rocked public imagination - so today, across the world, all B-town fans recognize and place these names like a shot. Same with Bollywood. I don’t think value judgment comes into play or counts. The name Bollywood is far too popular to risk or demand re-christening.”

Ad-Filmmaker Prahlad Kakkar refuses to play footsie and as always goes slam-bang into the subject, “The name perfectly defines, describes and reflects the industry. It is a greedy, arrogant, pretentious, over-the-top, over-paid, under-talented industry forever ripping off Hollywood material and pretending it’s theirs. They got away with it in earlier times because there was no TV or exposure to global cinema. Also, the Hollywood honchos reckoned it would be too troublesome to take these bozos to court… so they had a ball. Today, they dare not do that and so are sheepishly buying rights for remakes, about which the less said the better.”

Kakkar laughs off these great righteous indignation feelings expressed by stalwarts and invites them to have a long hard look at the mirror. “The good stuff that is coming out like Wasseypur or Shanghai, Kahaani or Pan Singh doesn’t have that label. They belong to Parallel/Alternative cinema. It’s all typical filmy bullshit and doesn’t deserve any notice. It’s the perfect brand name… a desperate imitative, pretentious wannabe.”

While Amit Khanna hurriedly dismisses the issue as a ‘non-issue fronted by bit-players like Mehra’, hi-profile TV producer Siddharth Basu is cool, direct and concise. “Today the name Bollywood, for better or worse, reflects a brand of entertainment – (glossy, star-driven etc.) and resonates being-on with their fans and all interested or curious about Indian cinema. We are stuck with it and I can’t see another name replacing it in a hurry although Salman’s Hifi sounds interesting.”

Film critic Saibal Chatterjee believes it’s really a storm in a tea-cup; much ado about nothing and comes essentially from a deep-rooted complex involving the issue of respectability, “Even since these guys hit the volume market, global – read diaspora – space and Rs 100 crore club phenomenon, they’ve been walking on cloud 99. However, in the international scene, they are pygmies with smaller nations racing past them in the quality cinema and the prestige slot. Kakkar is right. As you sow, so shall you reap. They still, in their heart-of-hearts, aspire to be like Hollywood, but don’t have focus, discipline, sense of respect and humility for their craft or fellow professionals and keep throwing attitude and churning out stuff that reeks of Tarantino, Coppola, Scorsese and gang.”

Chatterjee offers another riveting observation, “Interestingly the guys doing non-Bollywood type movies, Vishal Bharadwaj, Anurag Kashyap, Dibakar Banerjee, are not concerned or interested with labels and continue to do their own thing. It’s, ironically, the superstars who define masala fare, (typical Bollywood stuff) who seem to be most agitated. They should chill and be grateful they have a ready-made brand name to hawk their wares in the market.”

Film Historian Rafique Baghdadi begs to differ. The Veteran Mumbaikar and chronicler of its commercial cinema believes the tag does the film industry injustice, “Some guy at some point may have tossed out this name and the press, on cue, put it on a trapeze, swung it high - and it stuck. For me it’s both lazy and frivolous baptism by whoever the person was and equally lazily accepted and consumed by the ‘who cares’ and ‘chalta hai’ public. Just because we are stuck with it, doesn’t make it okay.”

Respected brand consultant Anand Halve is up next. He is not comfortable with the term either and articulates his take with wonderful precision, “Anything that is derivative reflects an active and conscious denial of identity and a cloying desperation to hit the wannabe button. Be it the B word, the hysterically ludicrous call-center accent, the Indian-born tag to people who have struck gold abroad. It comes from a deep-rooted complex that demonstrates zero confidence or pride regarding self-worth. Very, very regressive and negative. Both Amit and Salman are spot-on. Time to get rid of this albatross fast, if possible. What better time than – now?”

Veteran, dazzling hunk and global star Kabir Bedi joins the party. Articulate, suave and informed, he wonders what the fuss is about, “Look Bollywood is a done deal and as a brand is globally known, acknowledged and respected. This secondary status stuff may have occurred early on but today even Hollywood recognizes its presence, its enormous mass-appeal and its quirky, colorful, song-dance, melodramatic template that is so uniquely Indian. No wonder so many biggies indicate interest to come on board and associate with it. They are also aware of other streams of Cinema coming out of this label, which are different in form, content and storytelling.” Bedi believes it’s both silly and dangerous to tinker with an established, strong brand like Bollywood and while everyone is entitled to their opinion it’s hardly an issue that threatens the pride, prestige and solidarity of either the film industry or nation.

The last words must come from Santosh Desai. Desai for his turn agrees with Kabir that it’s a done deal but believes that the issue of good or bad in terms of ego or humiliation is irrelevant. “Brand Bollywood is a reality and reflects brand values that are special, exclusive, different and resonate brilliantly in many parts of the world. The critical point to address is ‘since it has taken on a distinct life on its own and since a serious viable alternative tag is not yet anywhere around, it’s crucial to infuse new nuance and meaning to this term to make it more edgy, exciting and layered.”

Over to you esteemed reader!