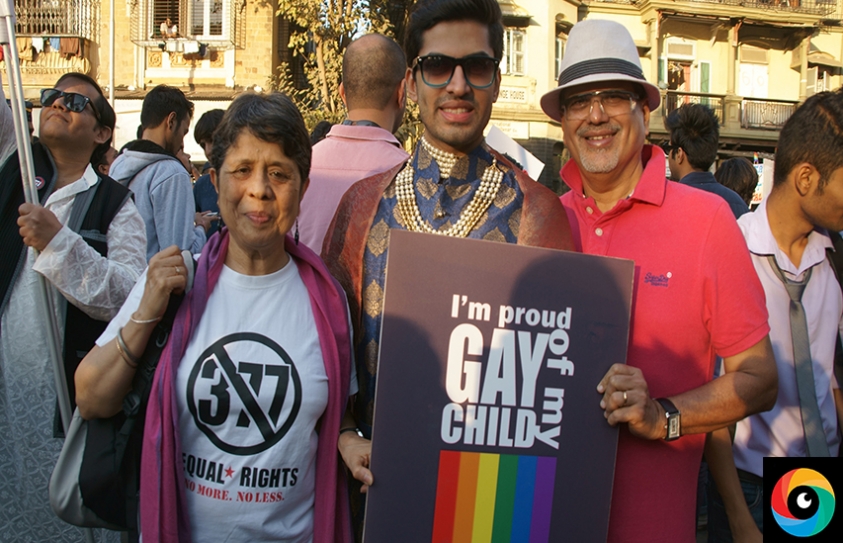 Organized by IIM Ally, the LGBTQ resource group of IIM Ahmedabad and KASHISH Arts Foundation, the parent body of KASHISH MIQFF; the screening program include KASHISH Forward, a film screening program focused on youth, and Best of KASHISH, award winning and popular films from KASHISH 2017; as well as screening of National Award-winning documentary Breaking Free by Sridhar Rangayan. 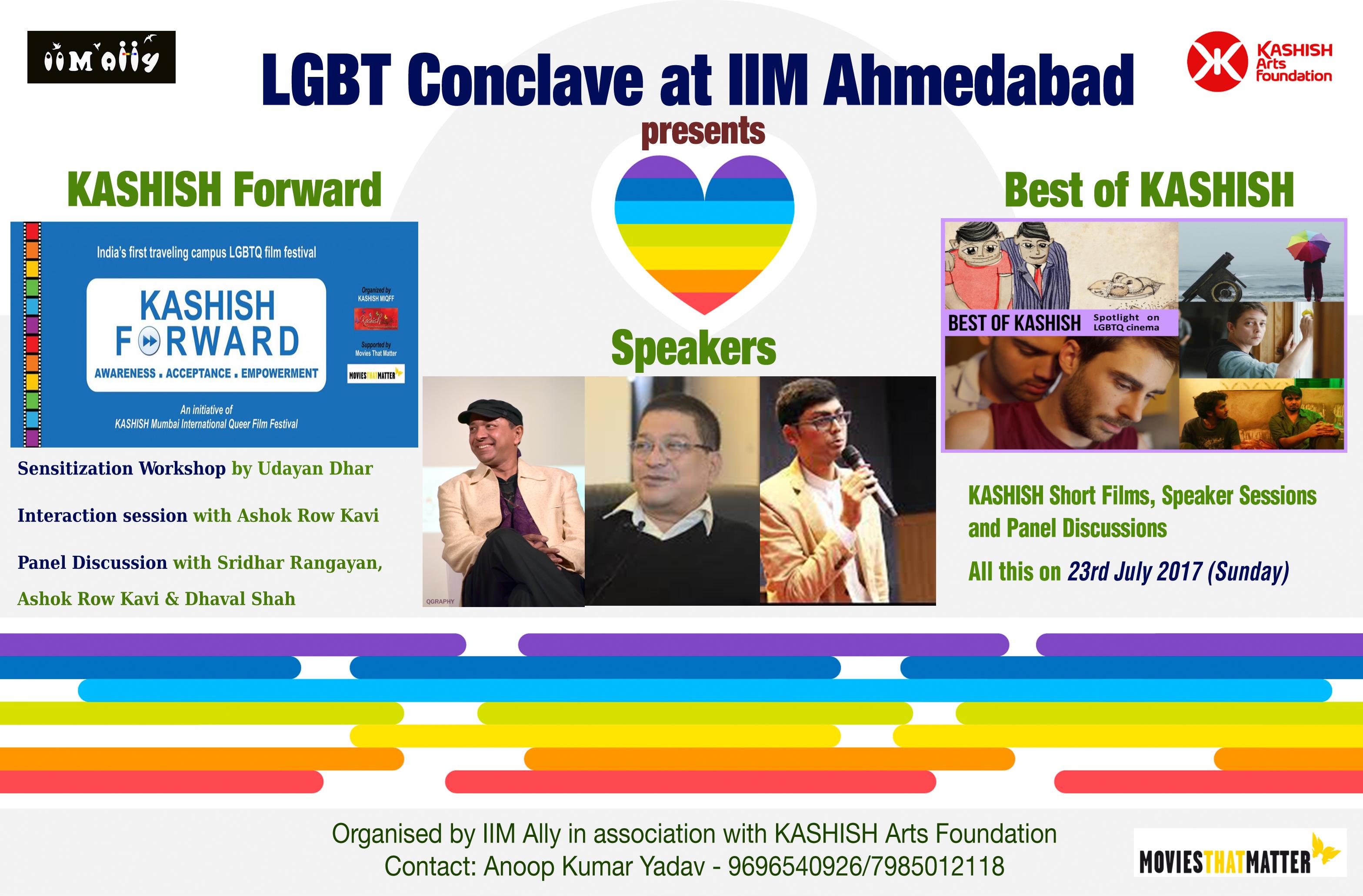 “KASHISH’s mission is not only to entertain but also to educate and empower.  Apart from the five day festival in Mumbai, KASHISH has been holding screenings in other metros and Tier2 cities. It is important to create awareness that gay, lesbian, transgender people have a right to lead their lives with dignity and have loving relationships. Medium of cinema, and films from around the world, offer a strong context”, said Rangayan, festival director of KASHISH, who has traveled to more than 18 cities with such programs. 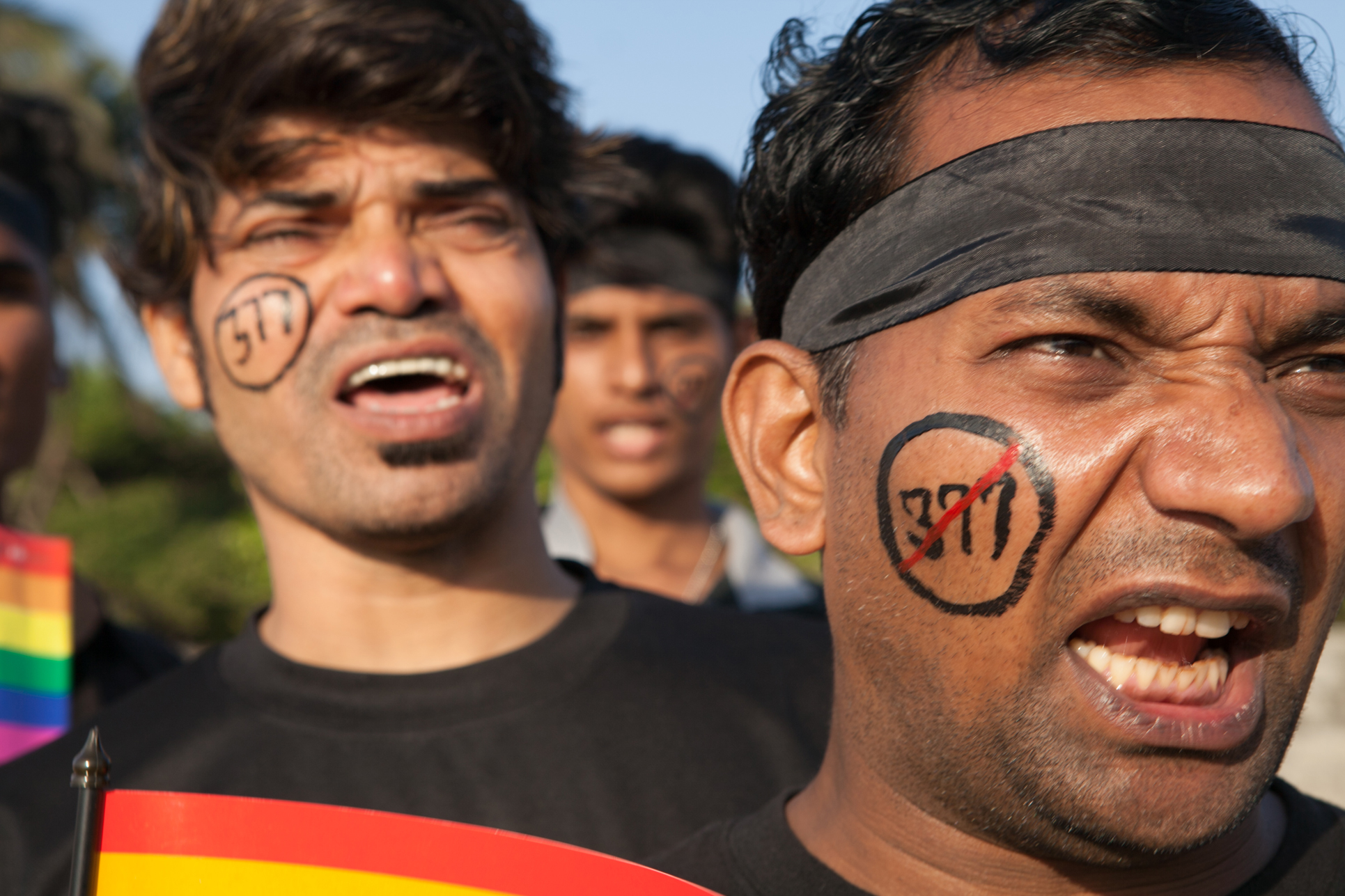 The LGBTQ conclave will also feature talks by gay right activist Ashok Row Kavi and diversity and talent expert Udayan Dhar; as well as a panel discussion about the LGBTQ movements in India and abroad, with Ashok Row Kavi, Dhaval Shah and Sridhar Rangayan.

"Emboldened by the success of our online awareness series 'Queer pe Charcha', we thought of taking a step further and collaborated with KASHISH to use the medium of movies to sensitize the society and encourage discussions around generally overlooked topics like gender identity, sexual orientation. IIM Ally team strives to create a positive impact and an inclusive environment for the queer community within & beyond the campus", said Anoop, coordinator of IIM Ally and a PGP student at IIM Ahmedabad. 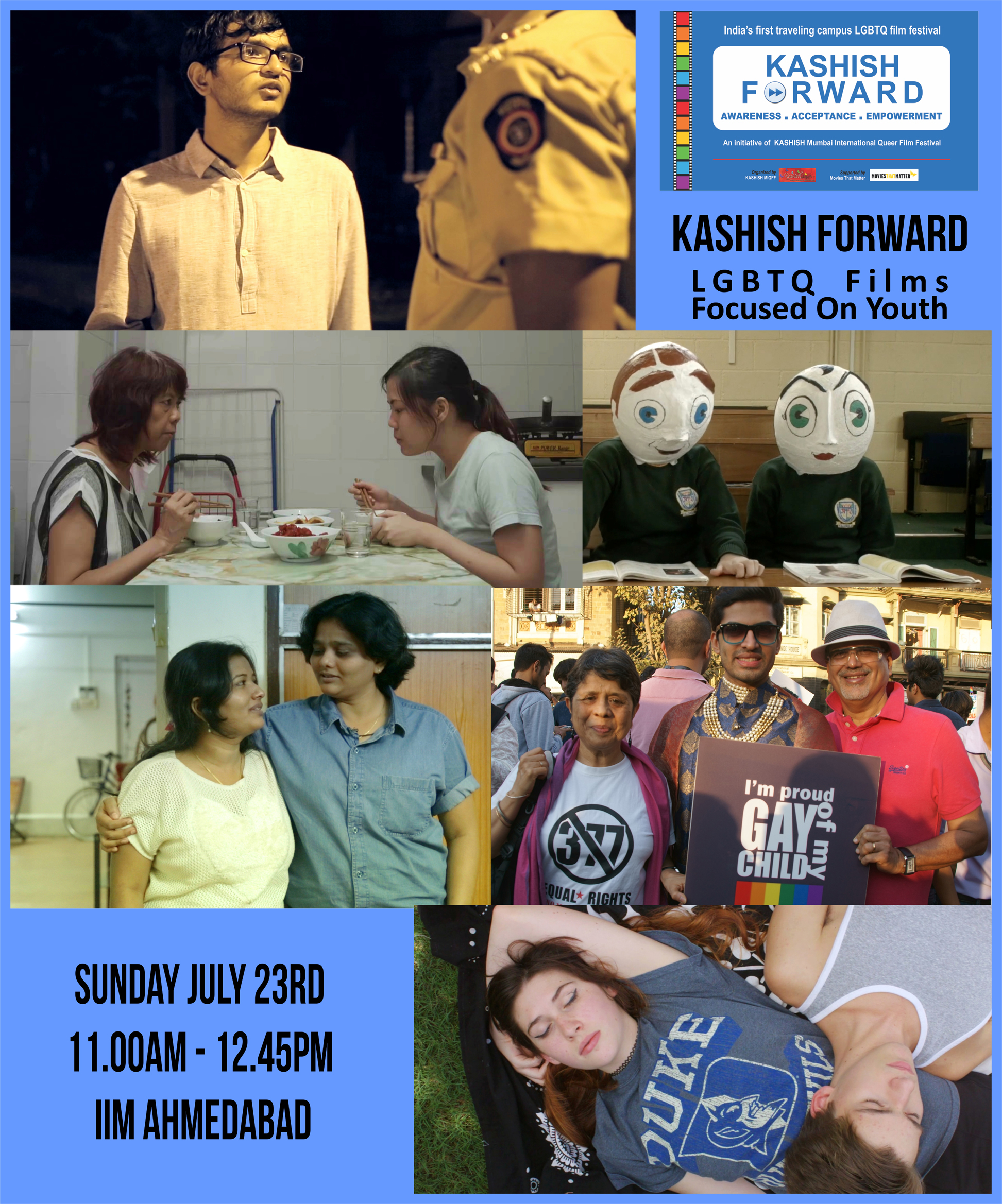 Best of KASHISH program will feature Indian short films The Fish Curry (Maacher Jhol), The Clarinets (Shehenaiiya) and Naked Wheels which won awards at KASHISH 2017 as well as Chudala and Devi. The international films to be screened are Mario Kike & David (Spain), Relics (France), The Recipe (Italy) and Beautiful Figure (Hungary)

KASHISH Forward program will feature Indian films All About Love, Any Other Day and My Child Is Gay, I Am Happy as well as international short films Keep Your Head Up (Ireland), Dear Drew (USA) and To Mum (Love, Me) (Singapore)

11.00am - KASHISH Forward - India's first traveling campus LGBTQ film festival with films from around the world focussing on YOUTH.

5.30pm - Best of KASHISH - screening of award winning and popular films from #KASHISH2017

FREE ADMISSION. OPEN TO EVERYONE.

These customized programs for colleges focus on youth related issues such as Identity, Discrimination, Bullying, Coming Out, Finding Love, Acceptance by Family, etc. The motto of KASHISH Forward is ‘awareness, acceptance, empowerment’ and not only meant for student community but also for faculty and staff at the institute, and for families & friends. KASHISH Forward is organized by KASHISH Mumbai International Queer Film festival with support from Movies That Matter, Netherlands.

Voted as one of the Top 5 LGBT Film Festival in the World, KASHISH Mumbai International Queer Film Festival is South Asia's biggest queer film festival and the only LGBT film festival in India to be held in a mainstream theatre. Founded in 2010, KASHISH is held over 5 days at three venues. It is the first Indian LGBT festival to be held with approval by the Information & Broadcasting Ministry, Government of India. KASHISH Mumbai International Queer Film Festival is presented by KASHISH Arts Foundation and organized by Solaris Pictures.