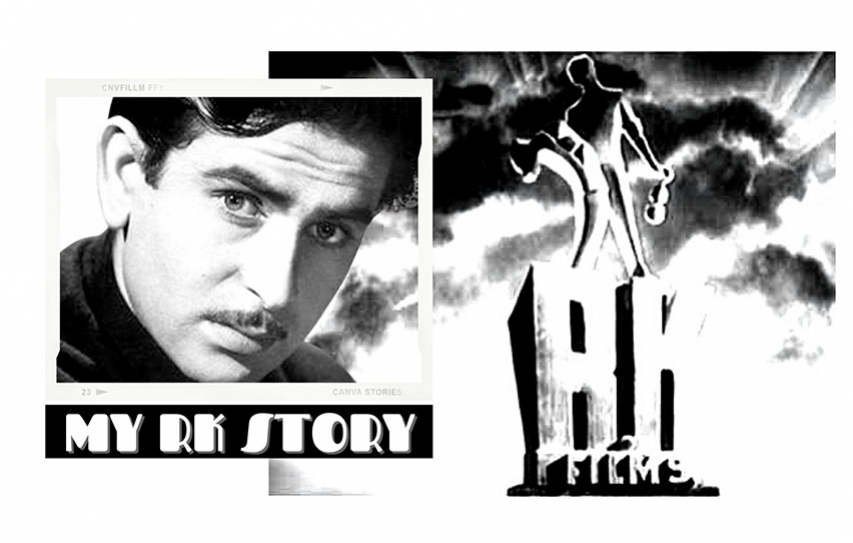 Once, Raj Kapoor rescued a mugged journalist from being stranded in New York. Khalid Mohamed recounts that personal story.

It will be his 32nd death anniversary on Thursday, June 2. Raj Kapoor (December 14, 1924-1988) passed away at the age of 63, a month after a debilitating asthma attack at the Siri Fort in New Delhi where he was to receive the Dadasaheb Phalke Award from President Ramaswamy Venkataraman, the eighth President of India.

Before him his father Prithviraj Kapoor and after him his youngest brother Shashi Kapoor were conferred with the honour for their invaluable contribution to Indian cinema.

I happened to be at the award ceremony on May 2. He was going through breathing trouble. Yet he clutched at my hand to go to the foyer and smoke a cigarette, which he could barely light up. An oxygen mask and cylinder were rushed to him. Dressed in a meticulous white suit, he somehow returned to his seat to join his wife Krishna Raj Kapoor. He was fast losing  consciousness. When his name was called out he could barely stand up, his hands folded. That’s when the President left the stage, by eschewing protocol, and went up to Raj Kapoor and presented the award.

Subsequently, his daughter Reema Jain stated, “Somewhere, I believe Papa ordained his death. He had left Mumbai on April 30. There was a dust storm in Delhi. As soon as the door of the plane opened, he was hit by a gust of wind. Being an asthma patient, it affected his lungs. He attended the function with an oxygen cylinder. Throughout the event, he was restless.” 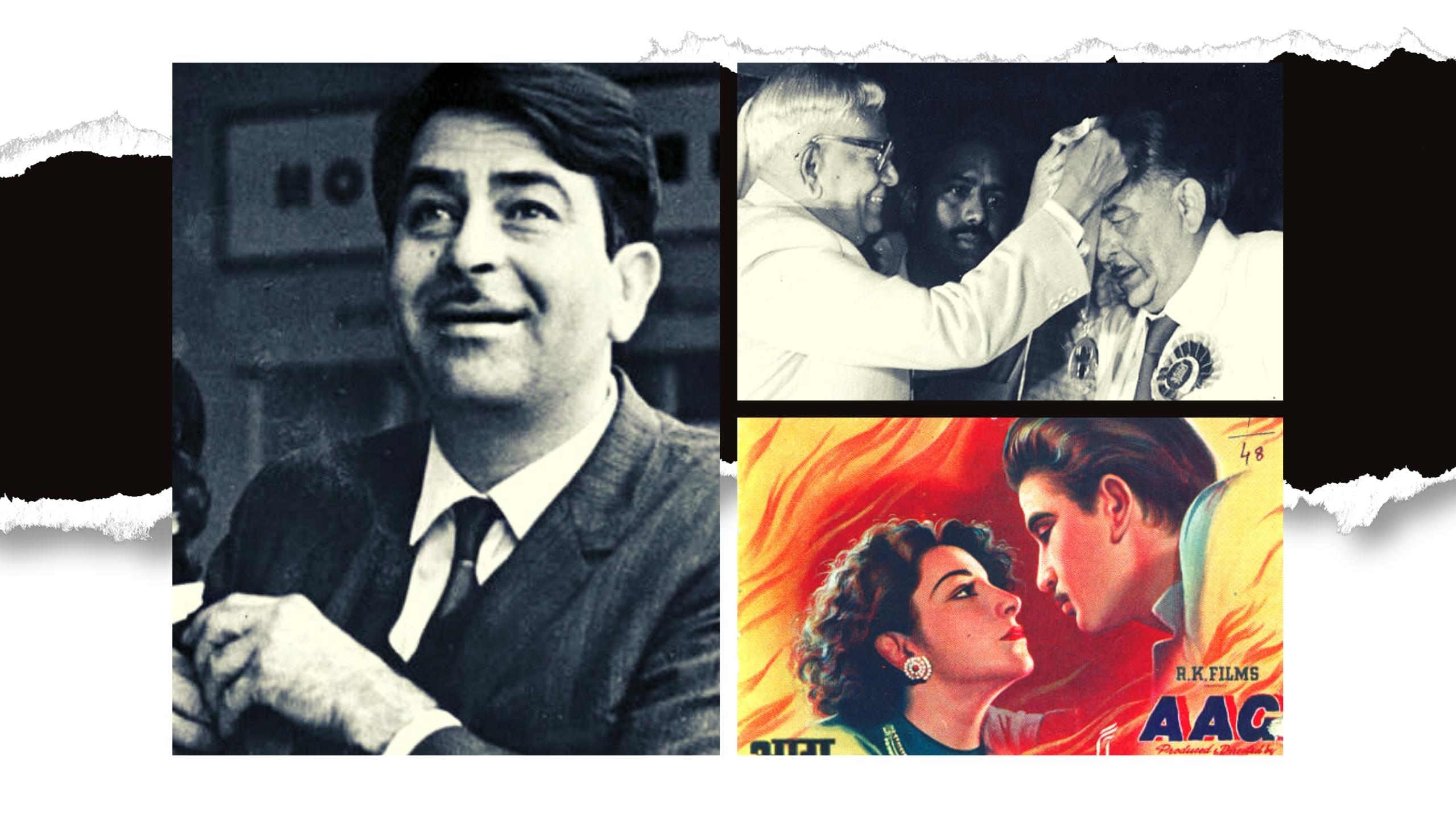 At the event, when he was about to collapse, the President called for an ambulance. Rima Jain recalled, “Papa was put on a ventilator. There were news bulletins on his health. Ministers dropped in to check on him. In a way, he prepared the family that he was going.”

Reportedly, during his last days, a Mr Saini, in charge of the ICU, asked him jokingly whether he would include him in his next film in a crowd scene. When Raj Kapoor shook his head, Saini pleaded, “Not even as a junior artiste?” The filmmaker then called him closer and whispered, “Hero! Hero!” That was the last wisecrack from the man who had incarnated the quintessential Joker.

Today, I rewind to the most famous RK, I was privileged to know even if belatedly. As a schoolboy, I’d rush to see his films, either directed or produced by him, catching his early oeuvre at morning shows, which would be ‘house full’, invariably at Mumbai’s Liberty cinema.

These were Barsaat, Awara (its hand-painted poster is still displayed on the wall of Liberty near the staircase leading to the balcony), Shree 420 and Jagte Raho. Some I had to catch later on video cassettes, notably his debut-making directorial feature Aag, and there was Aah too. Boot Polish, a take on orphaned kids, continues to make me dissolve into tears, especially the song Tumhare Hain Tumse Dua Mangte Hain playbacked by Mohammed Rafi and Asha Bhosle. The dramatic stories, the RK-Nargis combo, the studio’s logo, the chart-topping music and the performances, be it by RK, Nargis, Nimmi, Nadira (Mud Muk Ke Na Dekh, aaah), Motilal, Premnath, Baby Naaz and so many more, would keep me enthralled.

At my school’s annual celebration day, on being called to sing (scary) on stage, I had burst forth into a full-throated but majorly off-key rendition of Mera Naam Raju Gharana Anaam (Jis Desh Mein Ganga Behti Hai) sung by Mukesh. I forgot the lyrics  halfway through and scampered off the stage, red-faced. 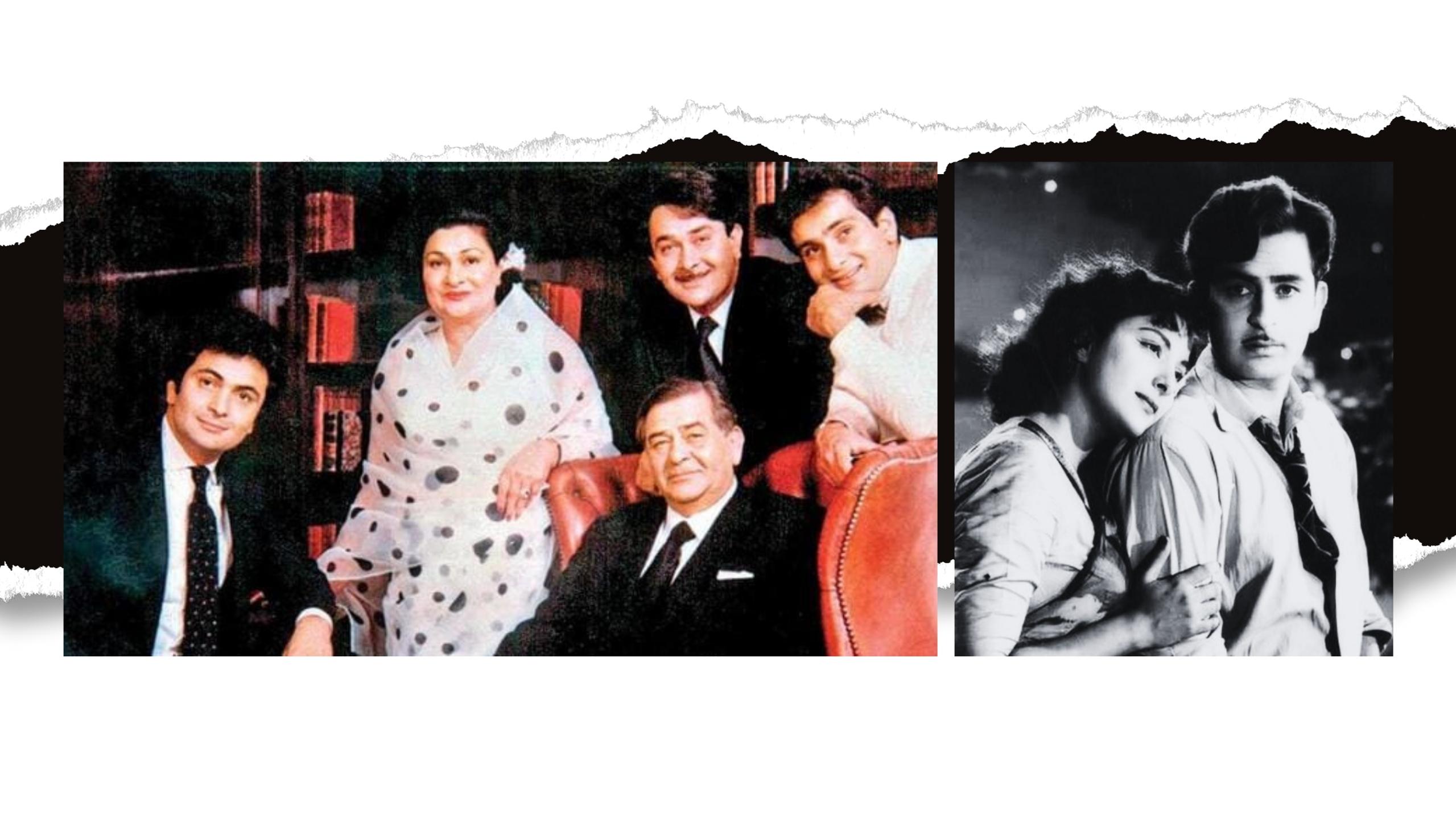 At an enormous garden-lined home, I lived with my grandparents, often lonely and fantasising childishly about the movies, the Bollywood ones, which were considered hopelessly low-brow then. Still, I’d conjure up these impossible images in my head that Raj Kapoor would show up at our house and congratulate me for having at least attempted to sing one of his tracks. Needless to say, that didn’t ever happen, it was just one of those hallucinations. The memory has stayed though.

So much for my back-story on a kiddo’s fascination for the stories, music and the frequent Chaplinesque-style of RK. The years flew, grandpa passed away, estate duty and a complicated will, coerced grandma and me to move to a way more modest home on Sleater Road, close to Grant Road railway station. At the new Apsara cinema closeby Lamington Road, the hub of cinema halls then, Sangam was about to premiere. I queued up for eight hours at the advance booking to see the triangular romance, Sangam, if not on the first day in the first week at least.

Sangam was lush, dotted with international locations, and packed with wonderful songs. The ‘showman’ epithet was attached to him thereon. In those straitened days on Sleater Road, I couldn’t afford to fantasise any more. I had to get real and latched on to the works of  off-mainstream cinema, or the New Wave if you’d like to call it that. Satyajit Ray, Mrinal Sen, Mani Kaul and Kumar Shahani became my new deities. No more escapist cinema for me.

A job as a journalist in The Times of India had to be secured, which I did on my second attempt, and within months was appointed the film critic of The Evening News of India (now defunct) and then, the Times of India. So where does Raj Kapoor figure in my tide of circumstances? In an indirect way, he did. I valued the uequivocal socialist principles and the spirit of reform evidenced so fulsomely in his earlier films. 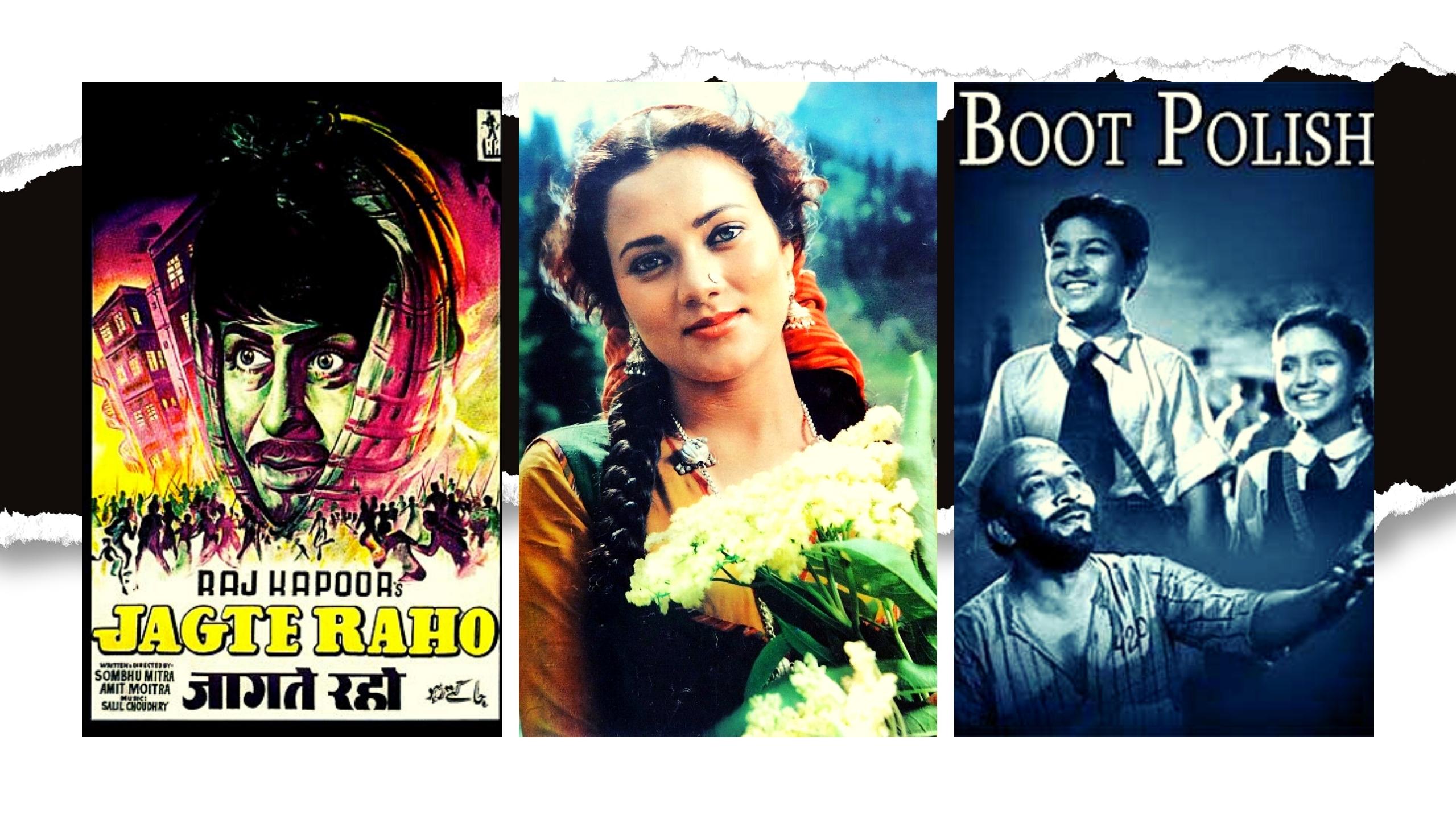 Being brash and extra opionated, I wrote up rather derogatory reviews of both Prem Rog and Satyam Shivam Sundaram. In retrospect I realise I’d missed out on the theme of widow remarriage in Prem Rog, had found the film over-the-top and too glam-sham to be true. Raj Kapoor had complained to the TOI management, asking who this chitterling of a reviewer was. Fortuitously for me, those were the days when editors stood by their reporters and reviewers. Instead of punishment, there was praise for sticking to one’s integrity.

Then came Ram Teri Ganga Maili, which was an eye-reopener. The subject of an unwed mother - and the remarkable scene in a graveyard where the young woman says she is more afraid of the living than the dead – revived my RK fandom. The review was a rave, many of my colleagues and art cinema votaries were shocked. How, how could you praise a ‘commercial’ film? And wasn’t he exploiting Mandakini by showing her semi-nude under a waterfall. I’d seen enough world cinema to counter that: if Fellini, Bergman, Godard and Bertolucci could show nude scenes, why not Raj Kapoor?

Such logic was ignored. A language newspaper even wrote that I had compromised my principles because I was currently collaborating with Raj Kapoor on the script of his next opus! Fat chance. No such thing, I hadn’t even met the actor-producer-editor-director in person till then, and just developed a pair of deaf ears.

Next came an invitation for the celebration of the mega-success of Ram Teri Ganga Maili at the China Garden. To go or not to go was the question. What the hell, I’d always wanted to meet Raj Kapoor, I wouldn’t be cowed down, so there I was at the restaurant. As I’d imagined when I was a schoolkid, I was congratulated by RK, asked to sit by him. And with moist blue eyes, he said, “People are saying I bribed you for the interview. That’s how the world is.” 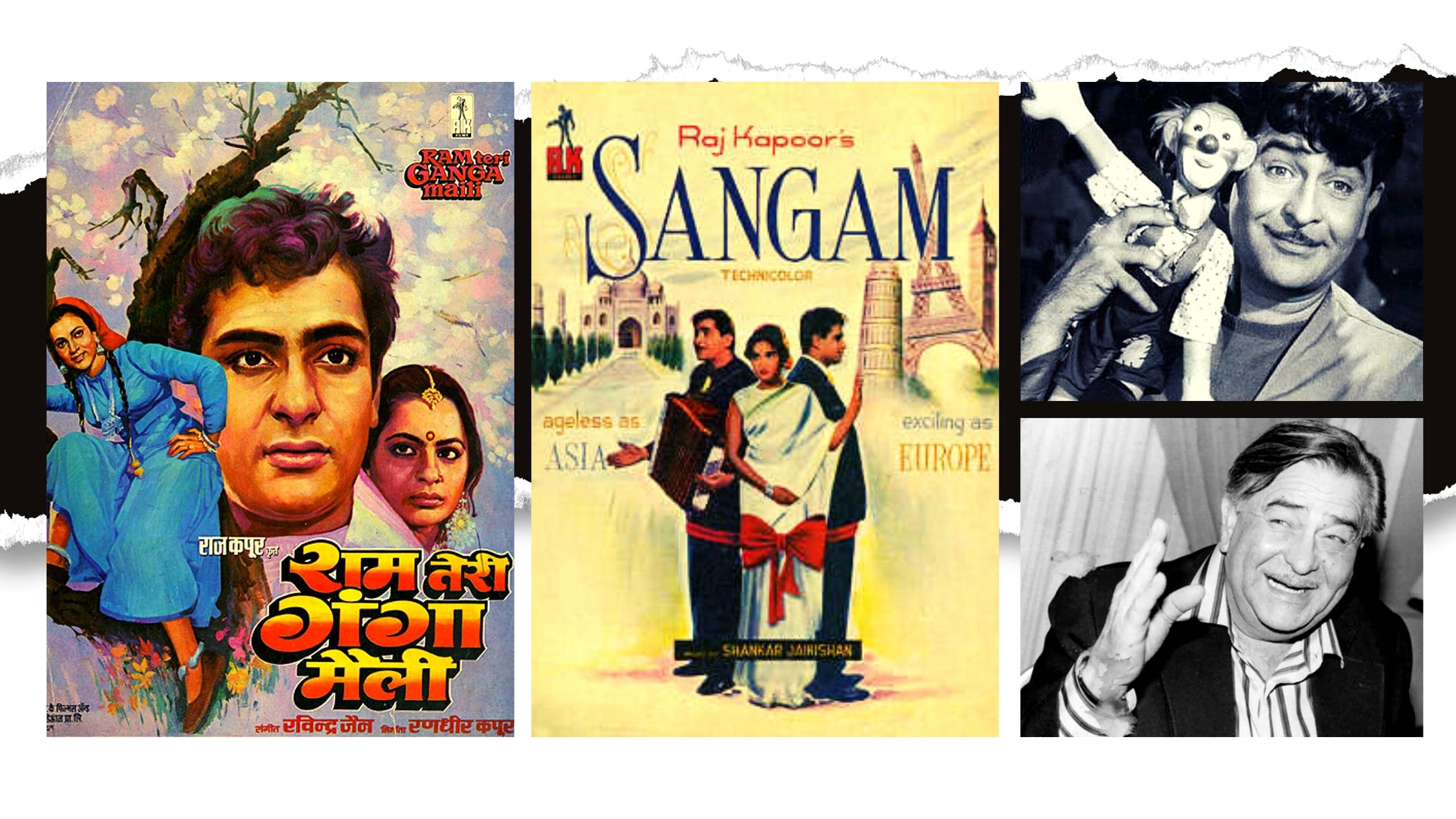 Even Shammi Kapoor and Randhir Kapoor had gone on record to claim that I must have been drunk out of my skull while writing that review. None of that mattered, I had genuinely related to the film, and had the right to say so.

The review was forgotten but not forgiven to this day by my peers I think. So be it! The next year I was in New York en route to Los Angeles as part of the Festival of India delegation led by the National Film Development Corporation. And despite clutching to my sling bag as if my life depended on it, I was mugged on Lexington Avenue. A complaint at the precinct’s police office was met with a shrug, and a drawl, “Check out the litter bins around here. You may find your slingbag if you’re lucky… empty of course.”

Passport, visas for stopovers in France and Germany, return air ticket and dollars were all gone. Maybe I could subsist for a few days on the travellers’ cheques but there was this feeling of being stranded, helpless. American friends chipped in with sufficient loans to survive.

Raj and Krishna Kapoor were to be chief guests of the Festival of India in Los Angeles. Zubin Mehta was to felicitate him.

Raj Kapoor was at the New York Hilton and called me over, rightaway handing me a wad of dollars. When I refused, he said I could pay him back the equivalent amount in rupees back in Mumbai. Still, not acceptable sir, I responded. What I did accept were his phone ‘calls to the Indian embassy to issue me a new passport, facilitate my visas, and to Air-India for a duplicate of my ticket.

And then he surprised me by pulling out a battered old Parker pen from his shirt, “Please, don’t say no to this. I have written most of my scripts with this right from Aag onwards.”

That was one offer, as they say, I couldn’t refuse. The pen is with me, and will be, as a mark of my childhood, of those days when I would fantasise that he would materialise out of thin air to congratulate me for attempting to sing Mera Naam Raju Gharana Anaam.