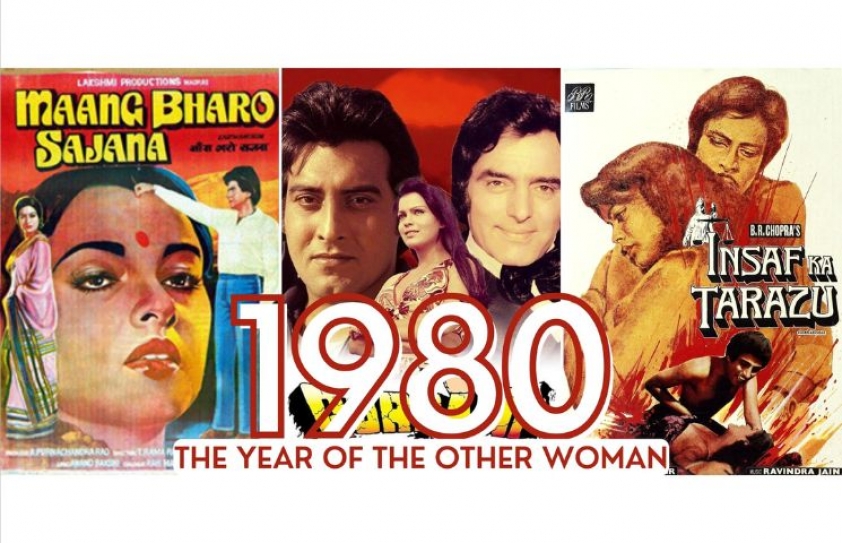 Film historian Dhruv Somani flashbacks to the year 1980, when the subject of ‘the other woman’ was no longer considered taboo in Bollywood.

It was the year 1980, when the other woman came to the fore. Forget marriages, re-marriages and divorces, rumours buzzed that year of broken engagements as well. Quite a few heroines were in the news for their hit films besides their personal choices and news making decisions.

Hema Malini’s status changed from a girlfriend to a wife. Zeenat Aman walked away with her head high after the most talked about fiasco in the film industry, gaining sympathy and support from her fans and film friends. Reena Roy, too, gained consolation and support from colleagues.

Bindiya Goswami was the lady in the waiting who later married her beau Vinod Mehra and then J.P.Dutta. Parveen Babi gained empathy as she had survived a mental breakdown. Rekha kept her eyes only on her mega superstar.

On the screen too, it was the other woman who dominated the scene. The biggest hit of the year was undoubtedly Aasha, starring Jeetendra, Rameshwari, Girish Karnad and Reena Roy. Not only were its collection figures unprecedented, it was a double whammy considering its low cost.

Aasha was the quintessential story of the other woman. No fight masters were required even though action bonanzas had become the ruling trend. The producer J. Om Prakash was stunned by its surprising superlative performance at the box office. Indeed, Jeetendra’s wife, Shobha, after one of the trial shows was choked with emotions and remained speechless. Presumably, she identified herself with the other woman since she had come so close to being one herself. Women, especially, flocked to the cinema halls and could be heard weeping copiously. 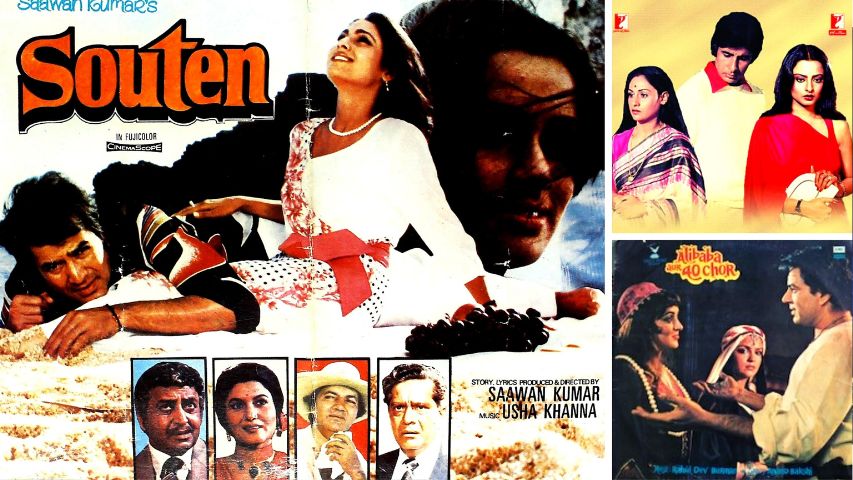 Jeetendra was undoubtedly the star of the year. Close on the heels of Aasha came yet another successful film about the other woman – Maang Bharo Sajna starring Jeetendra along with Rekha and Moushami Chatterjee. At a private party hosted by Nasir Hussain, he had joked with Jeetendra, “You are lucky that you don’t have to waste time listening to long boring scripts, you just do any film and it clicks’.

Another anecdote goes that when Jeetendra was involved in a similar storyline between Dasari Narayan Rao’s Jyoti Bane Jwala and Prakash Mehra’s Jwalamukhi, there was a rush to release one of these films first. Superstar Rajesh Khanna had sent Jeetendra a message, suggesting how he could save his film.

According to Khanna there was a bad omen on Jyoti Bane Jwala. A few weeks earlier, an ad of the film had appeared in the Screen Weekly showing Jeetendra and Dasari Narayan Rao shaking their left hands. Though they were shaking their right hands in fact, it was wrongly printed by the weekly. According to Rajesh Khanna shaking left hands was inauspicious and suggested that the lucky star should rectify this at once. Jeetendra got the changes done and was able to release his film before Mehra’s Jwalamukhi. While his film minted money, the latter tanked.

Besides welcoming the ‘other woman’ the ‘other man’ was accorded the same treatment too. The audience connected to the adulteress wife of Ek Baar Phir, another surprise hit of the year starring Suresh Oberoi, Deepti Naval and Pradeep Verma. Not many may be aware that originally this film was offered to Kanwaljeet and Benjamin Gilani who declined it inexplicably. The audience craved a change, the bad guy was appreciated more. Hence Suresh Oberoi gained the most from the film. He was now offered some big films like Laawaris. 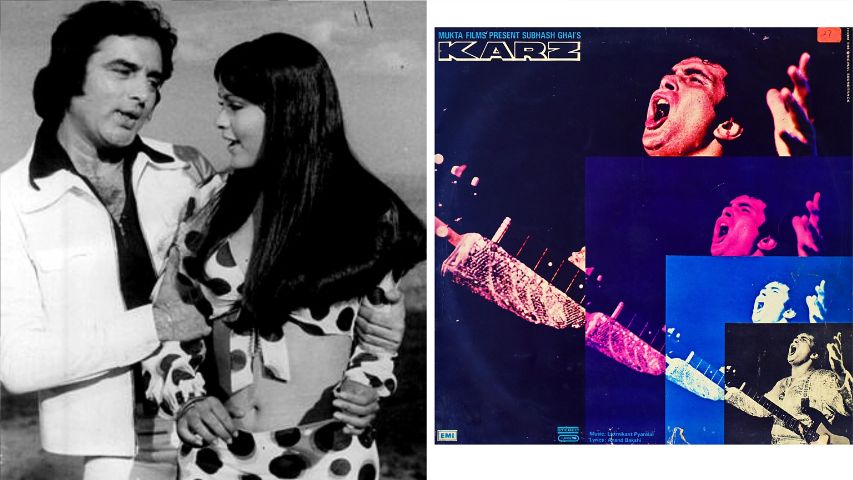 Divorces as themes in the films were also the flavour of the year: Thodisi Bewafaii with Rajesh Khanna, and Judaai (again Jeetendra) were big draws at the ticket counters. However, Ye Kaisa Insaaf starring Vinod Mehra and Shabana Azmi failed to create a buzz.

Triangular stories like two heroes in love with the same girl also found favour. A confrontation scene towards the climax in Qurbani for instance, was among the elements, which made it a mega-success. The Delhi papers advertised the film as the craziest film of the decade (whatever that meant).  Feroz Khan, Vinod Khanna and Zeenat Aman created history by being a part of one of the most stylized and sleek films made in those times. It became a cult film while its music is legendary.

Another love triangle, which was eagerly awaited was Yash Johar’s Dostana starring Amitabh Bachchan, Shatrughan Sinha and Zeenat Aman. It had all the ingredients for a blockbuster. Though it did, it failed to create the buzz or the hype of Feroz Khan’s Qurbani.

Aap Ke Deewane too was a love triangle with Rishi Kapoor, Tina Munim and Rakesh Roshan, who was also the director of the film. Though it had a promising storyline of two friends being in love with the same girl with some super songs, it proved to be a downer. Even a special appearance by lucky star Jeetendra could not salvage its commercial prospects.

Actors Sareeka and Rameshwari launched their own production houses.  The latter had even presented a Punjabi Film Chann Pardesi. The direction bug was spreading like a pandemic. Deepti Naval, Shabana Azmi and Dharmendra were all moving towards it, but only Deepti directed a couple of films years later, Meanwhile, Romesh Sharma had already become an assistant director to Yash Chopra. 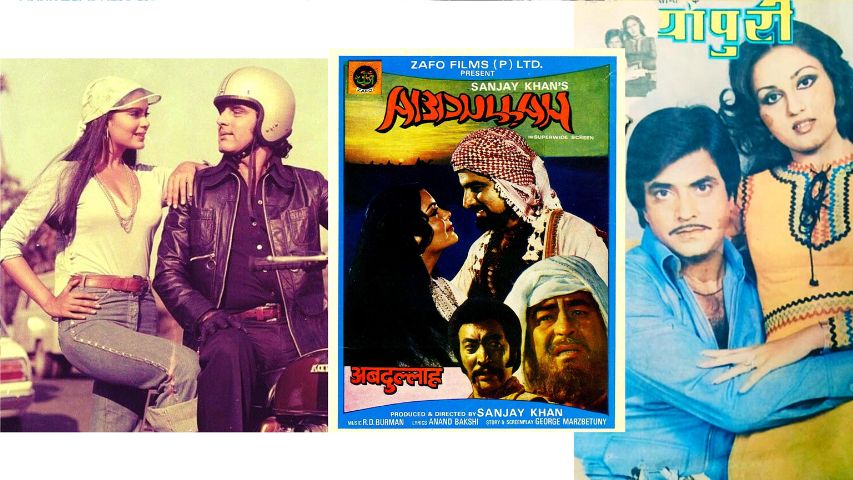 Raj Kapoor was busy with the production of Prem Rog but wasn’t satisfied with his director Jainendra Jain and took over the reins himself. Jain with a straight face said it was simple arithmetic as Kapoor was getting a much higher price from his distributors for lending his name as director.

Another popular director of those times did the same. Pramod Chakravorty likewise chucked out director I.V. Sasi from Patita starring Shoma Anand and Mithun Chakraborty and completed the film himself.

Two other films, which were running neck to neck for a theatrical release were Dev Anand’s Lootmaar and Sanjay Khan’s Abdullah. Both grand announcements, their release dates were September 26th 1981 and both wanted Bombay’s Maratha Mandir as the main theatre. Though Abdullah released first, it tanked. The collections picked up marginally after getting tax exemption.

Another long awaited multi-starrer, The Burning Train, was expected to set the screen ablaze but fell short of expectations and crashed. It was B.R. Chopra’s courtroom drama Insaaf Ka Tarazu which redeemed his market equity.

Zeenat Aman was certainly the Number One heroine that year and carried the film on her shoulders Both her co-stars, Deepak Parashar and Raj Babbar, were newcomers. Of the supporting cast, Padmini Kolhapure and Simi Garewal gained rave reviews for her brief appearances. Subhash Ghai’s Karz was Simi’s second film of the year for which she was applauded as she played a negative character with elan. Deepak Parashar, the suave debutant of Insaaf Ka Tarazu was the winner of Mr. India title, and was cast as the hero, but, undoubtedly, Raj Babbar was the most talked villain of the year due to his portrayal of the rapist. 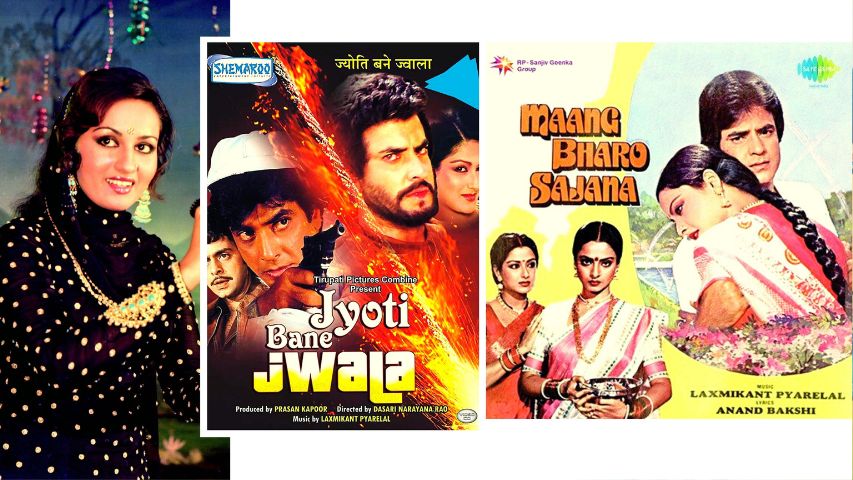 Both actors were cast again in Aap To Aise Na The, which was relatively a small-budget film starring Deepak Parashar, Raj Babbar and Ranjeeta – it became a surprise hit since it had melodious music and a nail-biting suspense track.

Rishi Kapoor was considered lucky as he gave hits every time he was cast opposite a new heroine. His films Bobby, Laila Manju, Hum Kisise Kum Naheen and Sargam were hits while his other films like Do Premee, Aap Ke Deewane and Karz, where his heroines were repeated, failed to do wonders. Karz, which sailed with super high expectations due to its reincarnation theme and chartbusting music failed to create mass hysteria. Even though its music did well, it could not match the craze of Aap Jaisa Koi from Qurbani. Clearly, Qurbani was the biggest film and set a benchmark due to its triumph at the ticket windows. Amitabh Bachchan too saw failure with his Do Aur Do Paanch, which didn’t live up to expectations.

All factors considered, 1980 belonged to Jeetendra as the male actor who belted out the maximum number of hits. Filmmakers made a beeline for Raj Babbar to offer him negative roles. Of the year, Zeenat Aman was the queen at the box office with Dostana, Takkar, Alibaba aur 40 Chor, Ram Balram, Insaaf Ka Tarazu and finally Qurbani making big waves at the box office.

As the year came to an end, the other woman surfaced yet again with a bang. With the announcement of Yash Chopra’s Silsila every producer and director showed a keen interest towards the film, which was considered far too bold, then. And soon there was Saawan Kumar Tak’s Souten that was a huge hit, indicating that the theme was here to stay. The other woman has always managed to remain the flavour from then on.