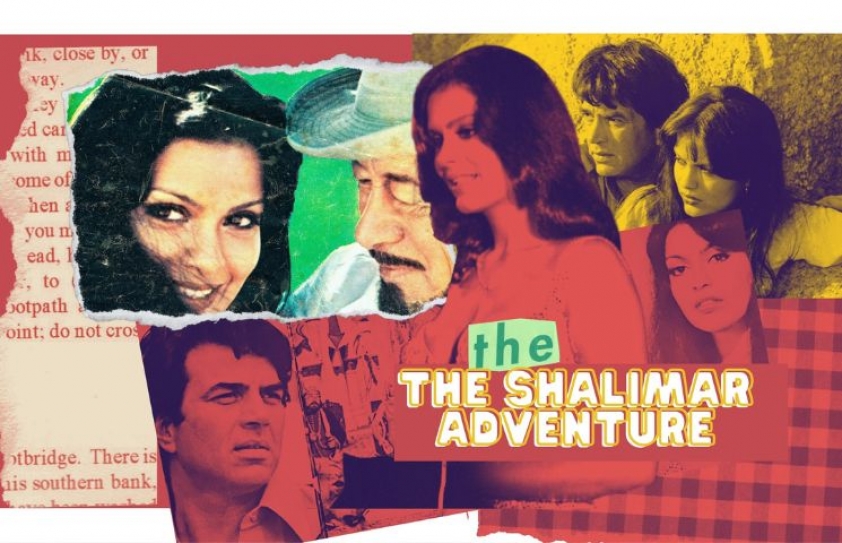 Film historian Dhruv Somani rewinds to the 1978 heist thriller, the international co-production Shalimar, as its charismatic heroine Zeenat Aman brought in her birthday yesterday on November 19.

Shalimar, released in 1978, has been very close to my heart. The plot, the music, the background and theme music have had an everlasting effect on legions of Pancham fans, besides me.

To top it all, it featured my favourite actress Zeenat Aman in a completely different avatar as she looked every bit of an international star. A blend of Indian and western costumes by Bhanu Athaiya added to her role and personality.

Having watched it many times, I feel it was made much ahead of its time as it was quite unlike what Bollywood had ever seen back then. Today it enjoys the status of a cult film with an extraordinary musical score.

Zeenat Aman had once celebrated her Birthday in 1977 on the sets of Shalimar. Here’s a recap on this heist thriller Shalimar, which is a significant film in her illustrious career although it was a commercial failure. Shalimar is accessible on Amazon Prime. 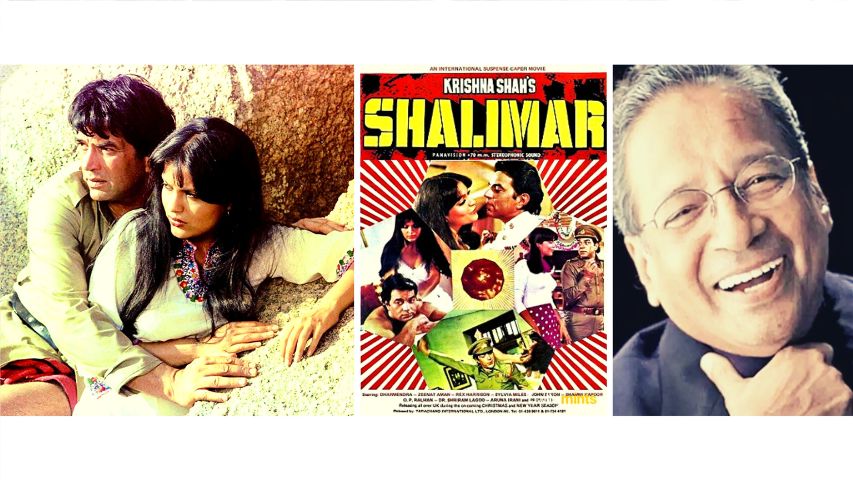 Krishna Shah, a self-assertive NRI, with big dreams from America, had planned India’s glitzy co-production and firmed foreign stars to shoot in the country. He was an America-based director of Indian origin whose debut film ‘Rivals’ had fetched rave reviews and praise at international film festivals while his second film, The River Niger, with an all-black cast, was highly successful in the West. He arrived in India to make a Bollywood film and called it Shalimar.

In Bombay, in his half page interview published in The Times of India, he was called a small-town boy who had made it big in America; his innumerable relatives clamoured around him lionising him as their success symbol. He had an army of producers and directors, too, who wanted to get to know him. Of them, Suresh Shah was the chosen one as he became the producer while Ranveer Singh and Bhupendra Singh were the executive producers.

The story of Shalimar was ready to go. Amitabh Bachchan was Shah’s first choice as the hero. Parveen Babi was under consideration as the heroine though he had already heard about her decision to quit and travel overseas with her then boyfriend Kabir Bedi. He met Amitabh Bachchan and on a 16-mm projector showed him a print of Rivals. The superstar immediately agreed to be a part of the venture. Amitabh Bachchan told him that before casting any heroine, he must meet Zeenat Aman.

The meeting was fixed with Zeenat Aman just two hours before Shah’s return flight to New York. Zeenat arrived to meet him wearing a black dress. He was certainly impressed, as he felt a certain aura around her. They chatted about world cinema. He told her that he had exactly 30 minutes to make up his mind but he felt such positive vibes that right away the role was hers. She, too, sensed a certain quality in Krishna Shah right from the beginning of her discussion, which is why they got along fabulously during the shooting.

For the heist thriller, Shah’s international star choices were John Saxon (a personal friend), and Gina Lollobrigida (of Come September fame) – the Italian actress, photo-journalist, sculptor, and sex symbol of the 1950s and ‘60s. Peter Ustinov, Dyan Cannon and Tom Berenger were also being considered. However, the project was getting delayed. The press was constantly headlining the news of the film being shelved. But a bigger dilemma was around the corner.

Amitabh Bachchan was shooting for Yash Chopra’s Kaala Patthar and had allotted dates in September 1977 to Shalimar. Yash Chopra threw a bombshell that he wanted 10 shooting dates of Amitabh for Kaala Patthar as a foreign crew was scheduled to shoot for his film at the same time. A meeting was arranged between Yash Chopra and Krishna Shah, leading to a confrontation.

Krishna Shah knew well enough that Bachchan was under severe pressure from several producers and Yash Chopra was clearly at the driver’s seat at that moment. Amitabh remained silent during this full discussion. Finally, it was decided that Amitabh would not be a part of Shalimar. On a rebound, Shah began thinking of international stars like Clint Eastwood and James Caan, but Suresh Shah persuaded him to cast Dharmendra instead.

Dharmendra agreed to do the prestigious project. His charm, honesty and openness came across as he told Krishna about his issue with English dialogue. Hence, the actor’s imperfect English diction was used as an asset, and in keeping with the character. It is believed that then theatre veteran Pearl Padamsee was recruited to coach Dharmendra in a smattering of English. 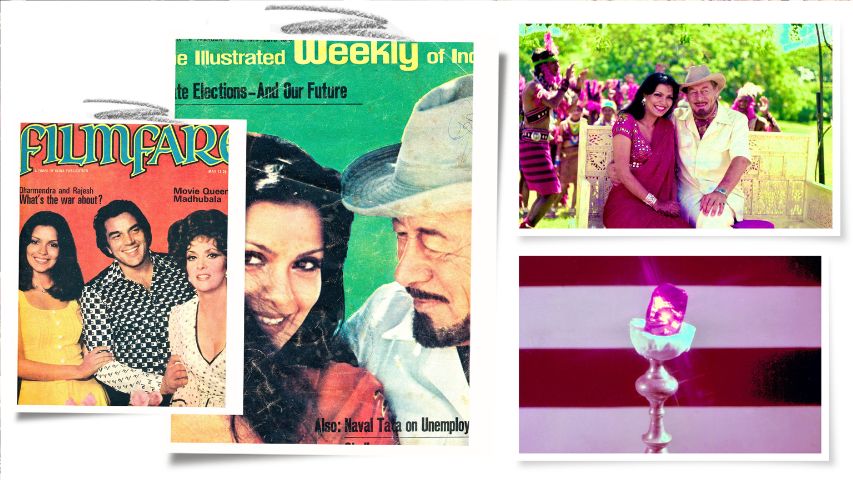 Of the international stars, the names of Gina Lollobrigida, Peter Ustinov and John Saxon topped the list. Gina was in Manila where Ranveer Singh (Ronny) flew and signed her on. Krishna Shah next planned a grand mahurat. Her exact date of visiting India was a well-kept secret. Ronny went to receive her at the Bombay airport.

The mahurat was held at the Turf Club but things went awry. The first casualty for the evening was the disappearance of the Chief Guests Dilip Kumar and Saira Banu who were invited to give the clap but quietly left the party due to the long delay in the proceedings. The press was about to call the event a grand fiasco.

To redeem the situation, at last Gina made a late grand entry and the press went crazy. Gina looked ultra-glam in a sensually revealing gown. Soon she realised that the leading lady was not to be seen. She was on tenterhooks since Zeenat Aman had not yet arrived.

La Aman entered Turf Club precisely 15 minutes after Gina’s arrival, stealing her thunder. She looked like a million bucks with her glittering and dazzling deep neck gown. The photographers went into an overdrive again, ignoring Gina Lollobrigida. Krishna Shah followed it up with his speech, with Dharmendra and Zeenat Aman positioned in the centre. Gina sounded the clapper board while the camera was switched on by industrialist P.J. Patel. The mahurat shot was taken.

Krishna Shah’s troubles were not over as yet as he circled around India and overseas in search of his perfect cast. Gina, after the mahurat, was having second thoughts about the film. She also demanded a higher remuneration, which was three times over that was agreed. She was out of the film and so was Peter Ustinov. This sparked fresh rumours that a huge investment had already been locked up in the film. There was every likelihood of the project being scrapped. 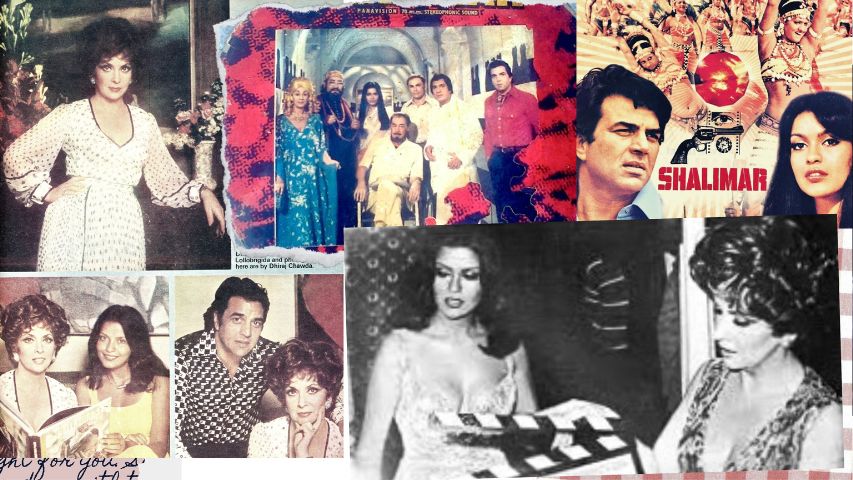 Finally, after the involvement of the producers and the director himself an ensemble cast was finalized, which read Dharmendra as S.S. Kumar, Zeenat Aman as Sheila Enders, O.P. Ralhan as K.P.W Iyengar (Romeo), Shammi Kapoor as Doctor Dubari, Rex Harrison (of My Fair Lady fame) as Sir John, Sylvia Miles as Countess and John Saxon as Colonel Columbus. The shoot began in Bangalore. Brief roles were assigned to Premnath, Aruna Irani, Dr. Sreeram Lagoo, M.B. Shetty and Jayamalani, who was cast as a tribal dancer.

The main set of Shalimar was the Maharaja’s Palace in Bangalore, which represented Sir John’s home. Shooting began around September 1977 but crises continued. Dharmendra had developed a severe back problem. Hema Malini, who was in town for the shooting of Janta Hawaldar, arrived to nurse him after taking a few days off from her schedule.

The Shalimar crew comprised 400 members, without counting the stars. Dharmendra’s back problem had set them behind schedule but they continued to shoot with other stars. O.P. Ralhan known for his wacky humour was his usual friendly person. Zeenat Aman who had stolen Gina’s thunder at the mahurat repeated her performance once again when she appeared on the sets for the first time. In one scene Dharmendra, Zeenat, O.P. Ralhan, John Saxon and Sylvia Miles were all required. Sylvia had donned a bold costume but when La Aman walked on the sets, jaws dropped. She looked gorgeous with her straight shoulder length hair and a deep necked evening gown. Zeenat Aman charmed even the spot boys and the junior artistes on the sets. She was truly under the star gaze.

There was a well-executed sequence in which Dharmendra, as a camouflage, wore a black and white body suit with his painted face to blend in with the walls and the floor of the hall where the Shalimar ruby is kept. Rex Harrison misses out on the fact that the form inching towards the precious ruby is none other than Dharmendra. This scene was slickly done. 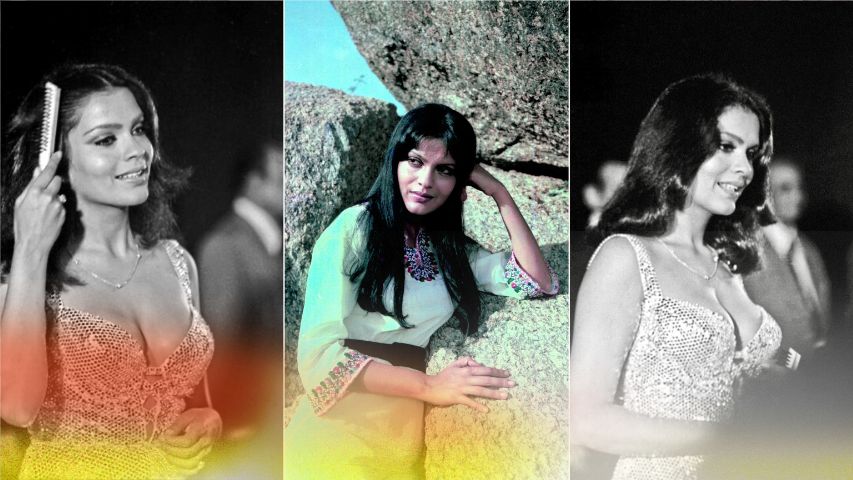 Once the shooting of Shalimar ended Krishna Shah lived in the editing rooms until her assembled the first rough cut. Both the Hindi version and the English version (titled Raiders of the Sacred Stone) were edited simultaneously.

R.D.Burman’s music score was a major asset: Hum Bewaffa Hargiz Na The (2 versions), Naag Devta, Cha Cha Cha, Aaina Wohi Rehta Hai and the haunting theme song Mera Pyar Shalimar, which sounds as though it belongs to a Bond film were a rage.

The background music was kickass as it enhanced the ambience of thrills. Helen was supposed to do the Cha Cha Cha number but due to date issues cropping up, Aruna Irani was signed. Rex Harrison’s voice would sound very familiar. So, it was dubbed by veteran Kadar Khan who had also penned the dialogue. It is not known if Sylvia Miles voice was dubbed or if she spoke her own dialogues in Hindi. John Saxon’s character needed no dubbing as he was shown mute.

The tribals and the tribal music played an integral part. They are shown as the slaves of Sir John for life as he had saved 45 of them from a death sentence. 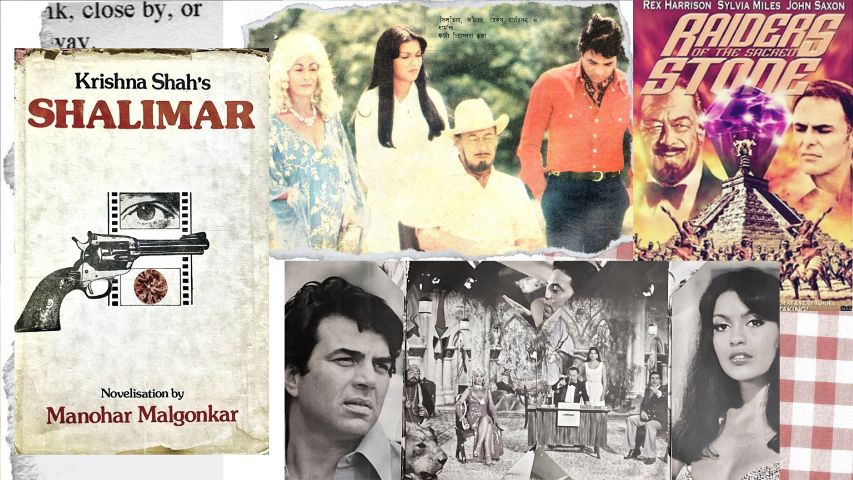 There is a sequence in the film where these tribals are shown dancing in a group with their painted bodies, wielding fire torches: this memorable chant Jingala Hoon Jingala Hoon was filmed in Madras on the beaches of Mahabalipuram.

Shalimar was in the news and tabloids constantly due to its theme and international casting. There is so much more about this film that it becomes virtually impossible to write everything here. For fans of this film, I would recommend reading the book called “The Shalimar Adventure”, written by author Bunny Reuben. Another book titled Shalimar was released in English and Hindi versions written by Manohar Malgonkar, which was the script converted to a novel.

The L.P records too were designed with openable flaps, which made it a collector’s item. Today, the original L.P vinyl of Shalimar sell at an obnoxious price in the grey markets. Magazines like Filmfare and The Illustrated Weekly came up with cover stories from the set of Shalimar. In fact, Filmfare had the lead actors Dharmendra and Zeenat Aman along with Gina Lollobrigida on the cover for one of its editions.

And for me, the adventure is still a stand-out among many of the imperishable performance of the one and only Zeenat Aman.