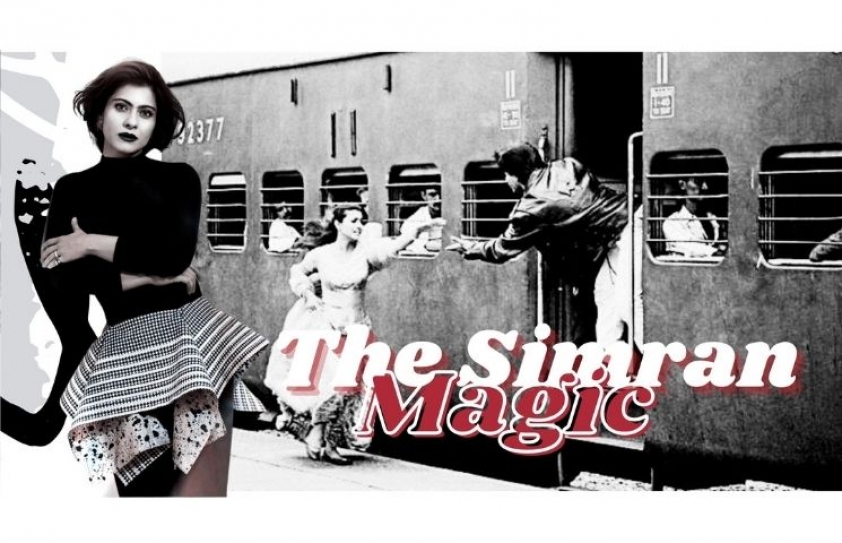 Khalid Mohamed zooms back in time to share his discussion with Kajol, on her imperishable performance as Simran, with Shah Rukh Khan as Raj, in Dilwale Dulhania Le Jayenge.

As many as 26 years have elapsed since Kajol and Shah Rukh Khan spun their magic with Aditya Chopra’s debut film Dilwale Dulhania Le Jayenge on a faintly unreasonable rainy day (20 October, 1995). The premiere in Bombay was at the New Excelsior cinema.

Today, the appeal of the abiding ode to romance cuts across generations. As Simran Singh and Raj Malhotra, the twosome defined the travails of overcoming family obstacles and reaching that all’s all-well ending. Mercifully, DDLJ as it’s commonly known, wasn’t ever followed up by a sequel.

Indeed, Aditya Chopra was so overwhelmed by the worldwide response that it took him five years to script and helm his next work Mohabbatein. Kajol and Shah Rukh went on to co-star in several movies but it’s DDLJ, which has achieved a cult status, their characters connecting intensely right to this moment with the millennials.

It’s believed that there was a real-life Simran, a friend of Aditya Chopra, from whose personality he borrowed several traits for Kajol’s role. And it’s no secret either that Aditya’s close friend, Karan Johar, played a sidebar role in DDLJ, besides serving as a sounding board throughout the film’s making and post-production process.

As an exercise before delving into direction-writing, Aditya Chopra would often construct scripts himself, the drafts of which even surprised the likes of the tough-to-please Shabana Azmi. One of the drafts was believed to be inspired by the Robert Redford-Demi Moore morality tale Indecent Proposal (1993). 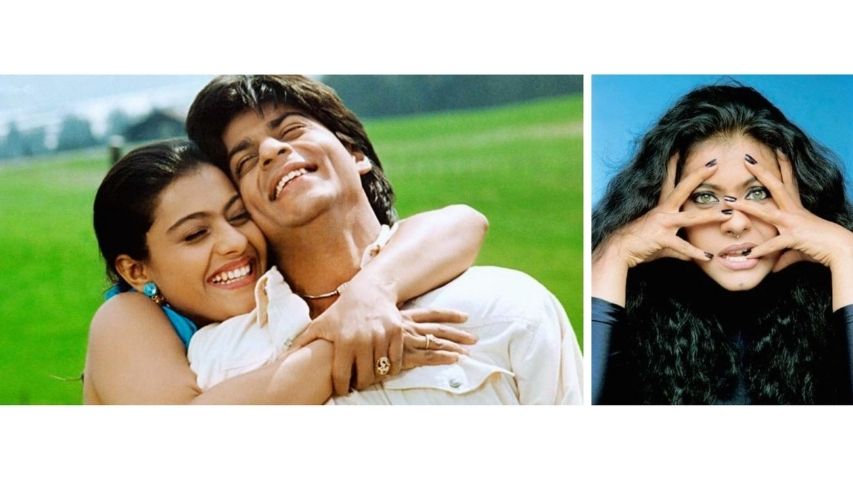 After much mulling over, Chopra fixed on DDLJ. Initially, the script was to be written by Honey Irani with dialogue by Javed Siddiqui. Chopra Jr, however, chose to be the auteur, taking on the tasks himself for his debut feature. The title was suggested by Kirron Kher, borrowed from a lyric by Inderjeet Singh Tulsi for the Ashok Roy directed and N.N.Sippy produced mega-hit Chor Machaye Shor (1975), headlining Shashi Kapoor and Mumtaz.

This was the ninth film of Kajol’s career, who was 20 years old while shooting for DDLJ. Subsequently, although she was at her peak with earlier successes galore like Baazigar, Yeh Dillagi and Karan Arjun, she reduced her workload drastically after her marriage in 1999 with Ajay Devgn (in recent years she was seen in Tanhaji: The Unsung Warrior, Helicopter Eela,  the short film Devi and Eela).

This week’s column goes back specifically to the sprightly actress’ response to her incarnation of Simran Singh, a London-based girl who falls in love with Raj, in the course of a Eurail vacation through Europe, but must wait till her tradition-bound father assents to their marriage.

For her nuanced portrayal of Simran, she won the Best Actress Filmfare trophy. Here then are excerpts from my taped conversation with Kajol on what the role meant for her, and perhaps always will:

How close did you feel to the characterisation of Simran as written in the script by Aditya Chopra?

I didn’t feel close to Simran at all. Whatever I did stemmed from my imagination and from what I know about some of my friends who are quite like her. My acting was a pre-thought-out reaction. I must have met 120 girls like Simran who have fallen in love like Simran did but, unlike her, they couldn’t reach a happy ending.

Perhaps DDLJ also made thousands of parents think about what happens to their children when they force them into a marriage with someone they don’t know, let alone love. 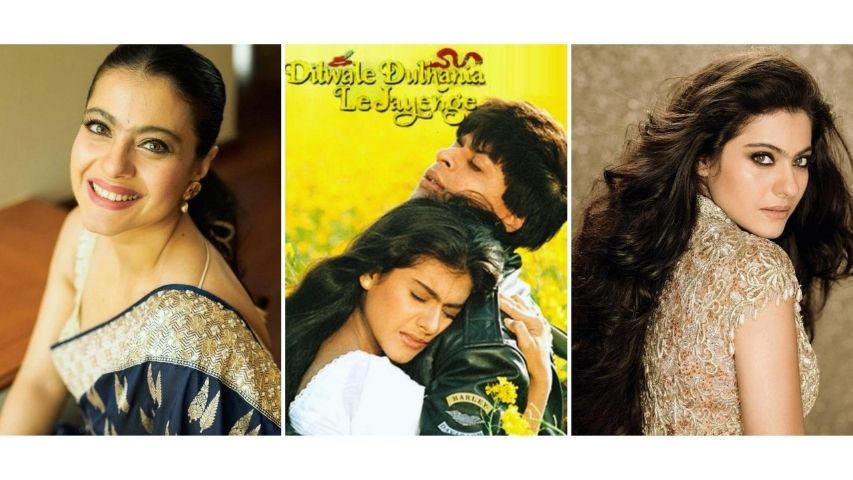 Do you think that your role in the film’s second-half could have been more strongly etched out?

No, I believe the film was completely correct, balanced. Simran had to go with the flow of the story, it was right and it worked. And how!

Still, there could have been more dramatic scenes for you.

But it wasn’t a hyper-dramatic film. There wasn’t any typical villain on the scene, there were none of those sob-sob sorrowful songs. The film was about normal young people and their parents, it showed that there are valid reasons for what motivates all of us. There was no right or wrong, there was only that ebb of circumstances.

Which was the most difficult shot for you as an actress?

The shot where I have to describe my dream guy with passages of poetry. I had to pick up a dupatta and say, “Saaya sa lehrata hai..” (A kind of shadow flutters). The moment was sensuous but the dupatta just wouldn’t fall properly. I just couldn’t get that movement right. Adi (Aditya Chopra) was so disgusted with me. Even now that shot lacks something.

Would you agree that the Simran’s conversations with her parents (Farida Jalal-Amrish Puri) were the backbone of her characterisation?

Those scenes described what Simran actually is - her values and outlook towards life. Simran is a well-brought-up girl. She’s not an extremist, she believes in Indian values. The point becomes even more important since she has been brought up abroad. Simran is more Indian than Indian themselves. Kids brought up in  India don’t actually sit down and reflect about what’s in store for them. Quite often, they lose contact with their own country’s traditions.

I will never forget that scene where I break down. I don’t get hysterical or melodramatic. I just seem to give up, as if I don’t care what happens to me any more. I just surrender like many girls do in real life when they don’t have an option. I also love that scene on the bridge where Shah Rukh Khan says, “I love you.” That was so well done. I keep watching it again and again. 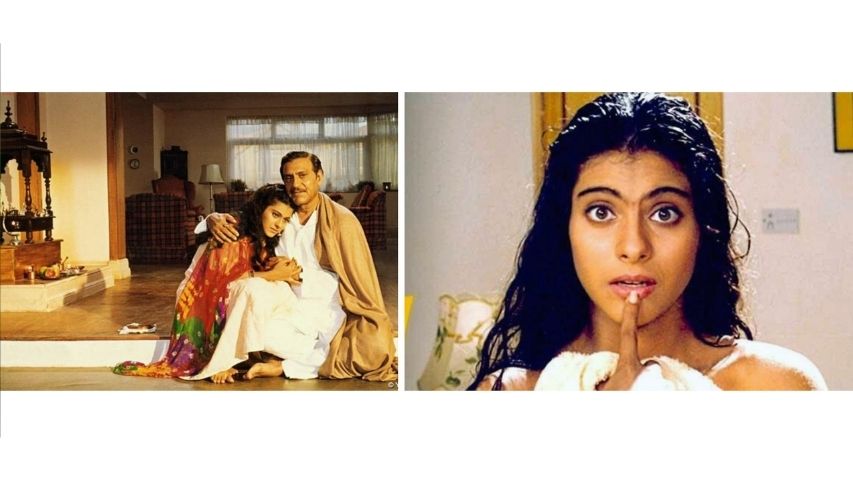 While DDLJ was being made, did you realise it was special?

I didn’t think about that at all. I was far too busy having fun, it was like a great big party… a family picnic really. Adi, Karan Johar (assistant director, then), my mom (Tanuja) and sister (Tanishaa), all of us had a whale of a time. I didn’t know if the film was working or not, I guess it was like I couldn’t tell the wood from the trees. In fact, I wouldn’t take any credit for my performance. Adi’s one of the best, a director to the core. He goads an artiste into interpreting the scene.

What has been your experience with directors in general?

I’ve noticed that when most directors sign you up, they expect you to do a lot of things on your own. They take your ability for granted. At times, they want you to do their work. That may sound weird but it’s true. That becomes obvious when you feel you can do much more but the director says lazily,“No that take was fine, it was okay.”

But you get  paid to work, right?

Right, you get paid to work hard but not necessarily to work hard. So it’s up to you to take it casually or slog your butt off.

Have you ever done anything you’re truly ashamed of?

Okay, let’s see, when I was a kid I was slapped very hard for telling lies. Mum beat me up with a tennis racquet and threw everything in the house on me. My great grandma came to my rescue that day or my goose would have been cooked. I’d have been dead.

I’m straying from the point, here. Still I’d like to know which actresses you have admired?

My aunt Nutan was the one who possessed the looks as well as that inborn acting power. She looked so regal, just like a queen. If one was to seat her on a throne, she would immediately command respect. She would rule without any opposition. None of the stars today have her looks or talent. Least of all, me. At this very minute, Sridevi and Madhuri Dixit are the best, I’m not as brilliant as I’m made out to be. No one among the current batch of heroines can touch them or reach their calibre.

By the way my Aunt Nutan had some unusual talents… she was a fabulous singer. The bhajans and poems she composed were out of the world. Although she hadn’t learnt Sanskrit, she’d write verses in Sanskrit, and the next morning she’d be flabbergasted that she actually wrote them! 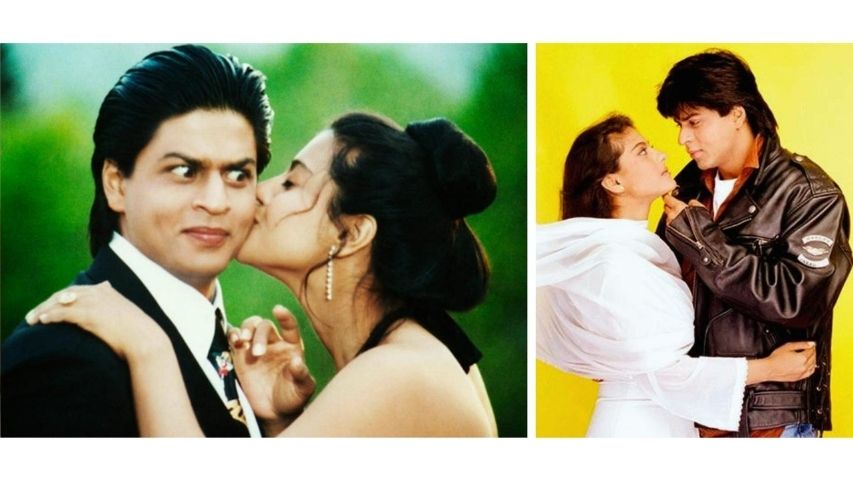 Back to you Kajol, how many takes do you usually need?

Ha! There’s no such thing. At times, I can be good in the first take itself, and at times in the third or fourth take. Acting is like rolling a dice, you never know when you’ll win. There was a scene in DDLJ when Shah Rukh had to help me zip up my dress. Both of us cracked up, we just couldn’t stop laughing. To get that shot okayed took countless takes.

Can you imagine anyone else in the roles of Simran and Raj?

No way, I can’t. I’m extremely possessive about the film. It’s mine, it’s ours, I was so emotionally involved. At times, I wonder if I can ever better or equal this performance. It’s a tough act to follow. Still, I have to find out whether this is the peak of my career or whether that are many more miles to go ahead.

Is there any role you’re longing to do?

What about a fun street-smart girl in the vein of Govinda?

Oh wow. I’m dying to do a tapori role. But  I don’t know whether I’d be successful at it. Somewhere somehow, I feel my personality gives away the fact that I’ve always been very well cared for. I seem to come across as someone who has never lacked anything in life. Chances are I’d end up looking totally artificial.

Postscript: Today, she appears to be more people friendly, fashion conscious and media savvy than she was in her prime. It goes without saying that Kajol could be seen in many more films but has chosen to be stubbornly picky. But then that’s her: perhaps acting has always been a component of her life, not her raison d’etre.